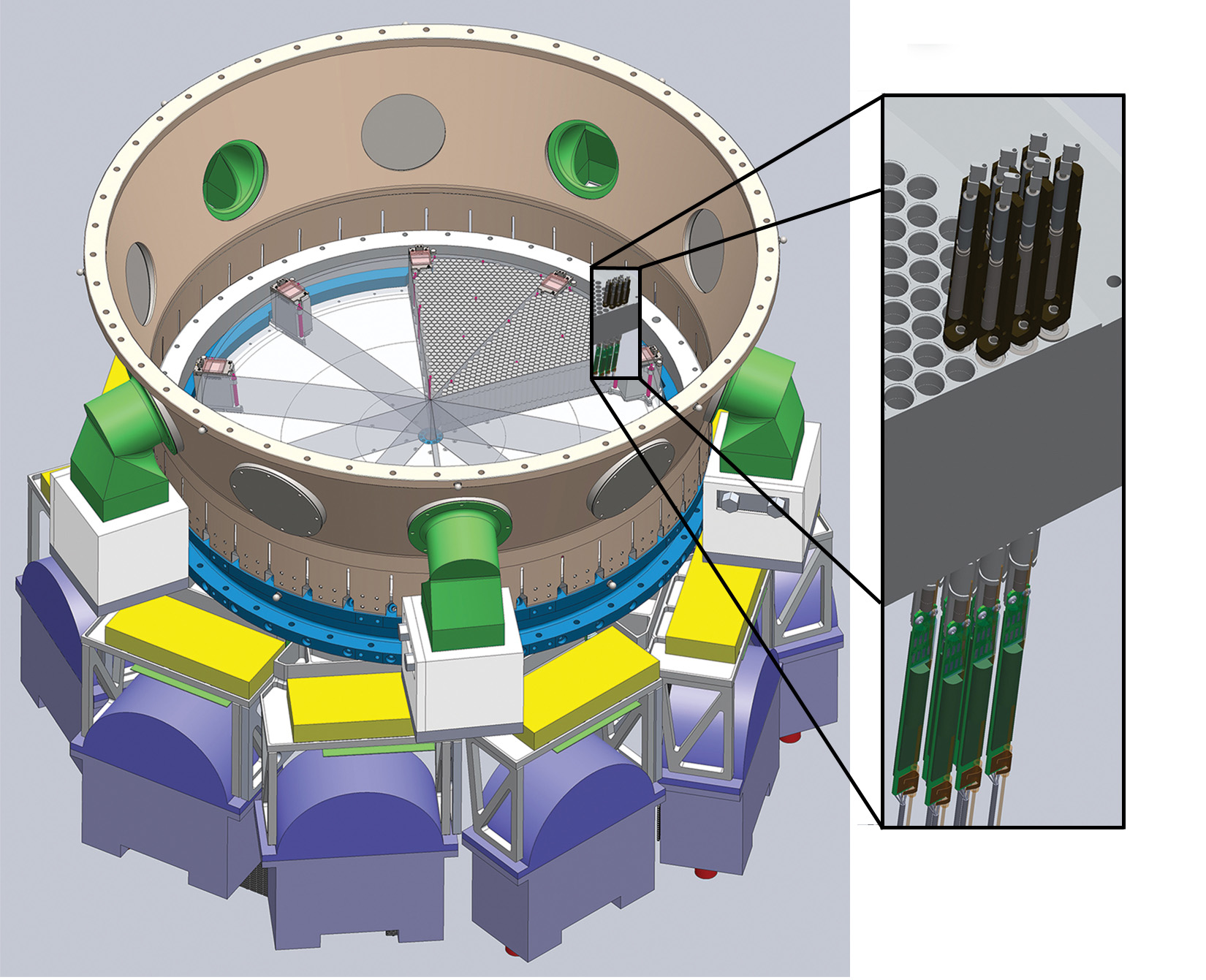 The camera is officially known as the Dark Energy Spectroscopic Instrument, abbreviated DESI, and it’s designed to help answer one of the most puzzling scientific questions of our time: Why is the expansion of the universe accelerating?

Cosmologists suspect a mysterious property called dark energy. Although it is thought to comprise 75 percent of the universe, its nature and the physics behind it are still mysteries.

DESI will create a high-definition, 3-D map of a swath of the universe going back 10 billion light-years. By exploring how structure in the universe has evolved through time, scientists hope to uncover the tug-of-war between the forces of gravity and dark energy.

Seven U-M faculty members from the departments of physics and astronomy will be involved with the project in areas such as software development, survey planning, data distribution and simulation work. They will also be on the science team when DESI sees first light in 2018.

The camera will sit at the prime focus of the Mayall 4-meter telescope at Kitt Peak National Observatory in Arizona. It will contain 5,000 optical fibers, each of which can be pointed at an individual galaxy, with the unique positioning system U-M will build.

“Our system features an array of 5,000 little robots that will simultaneously position each optical fiber on a galaxy,” said Gregory Tarlé, physics professor and member of the DESI executive committee. “The light will be routed to spectrographs, which will measure each galaxy’s redshift and precisely determine its distance from us.”

As galaxies move away from Earth, the light they emit is stretched into longer wavelengths by the Doppler Effect, Tarlé said, making them appear redder. The amount of this “redshift” can tell scientists how far away a galaxy is. Scientists currently have a good two-dimensional map of the universe, but they need precision depth measurements for a large number of galaxies to map in 3-D the state of structure in the universe over cosmic time.

Over five years of operation, DESI will determine the 3-D position of 30 million galaxies, providing scientists an unprecedentedly large and high-quality data set to work with. 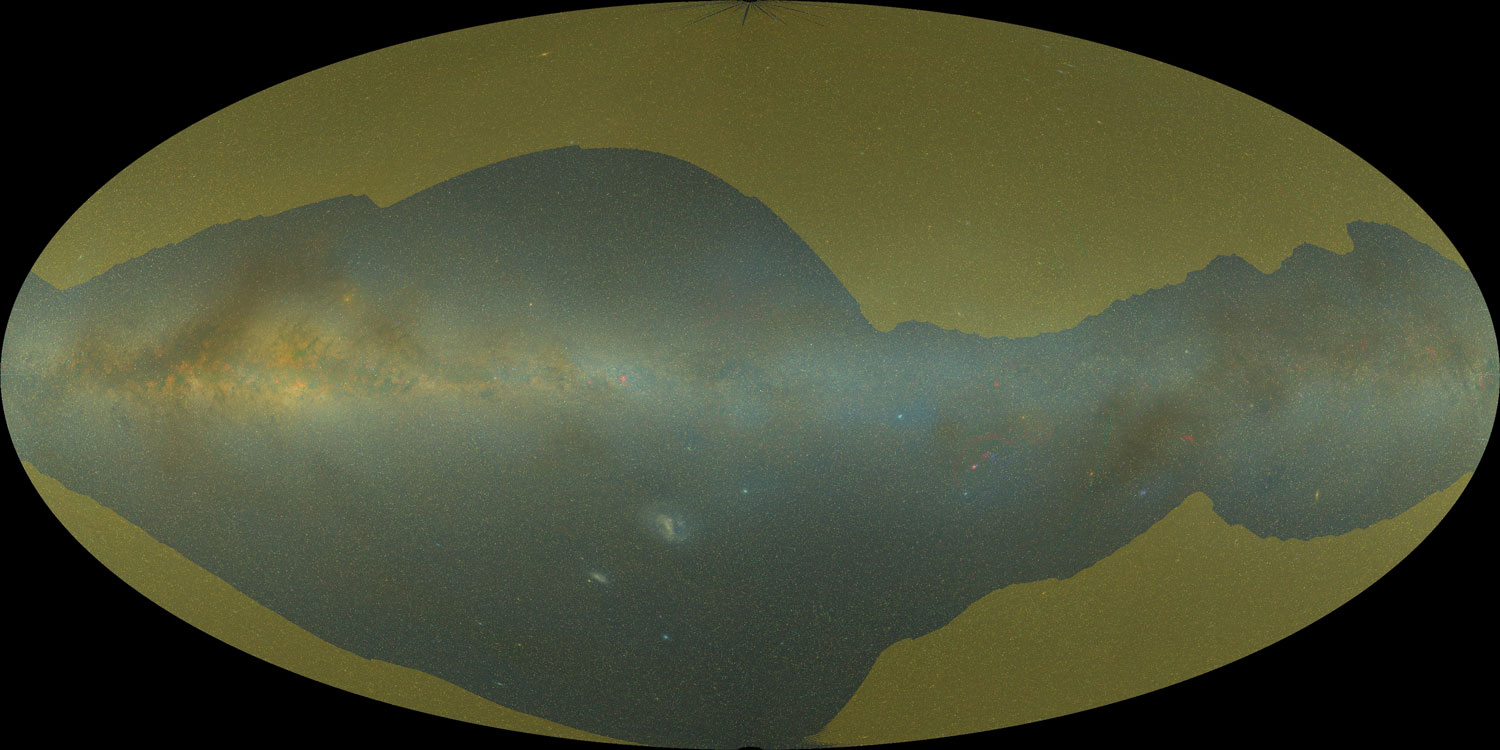 The Milky Way in galactic coordinates with an overlay of the swath of sky that will be imaged by the Dark Energy Spectroscopic Instrument. University of Michigan scientists will be involved in building the giant camera designed to give insights into why the expansion of the universe is speeding up. Image credit: A.Mellinger, C. Miller“This is what makes the project such a big leap,” said Chris Miller, assistant professor of astronomy and DESI data distribution committee co-chair. “In just a couple of decades, we’ve gone from collecting spectra from one object to 500 at a time. Having a dedicated 4-meter class telescope collecting spectra for 5,000 galaxies every 12 minutes, every night will really drive the science forward.”

Students will help build U-M’s “robotic positioner” component. Researchers say that was key to the university being selected for the job.

“We were chosen for this effort because our design was small, durable, and simple—but also because we had a track record of engaging U-M students to build sophisticated systems like this,” Tarlé said.

This year, Tarlé’s team will begin building and testing its initial “proto-DESI” system. Undergraduate students will construct and test the robotic positioners while graduate students will help devise the hardware and data analysis systems. Additional students will be involved in the science mission at Kitt Peak National Observatory within the next year.

Four physics and three astronomy faculty are involved. In addition to Tarlé in physics, Professor David Gerdes will devise software for the positioner system, Associate Professor Dragan Huterer will develop methodologies, algorithms and software codes to study the growth of structure and the expansion rate of the universe. Michael Schubnell, research scientist, will test the DESI fiber positioners.

U-M’s involvement in the DESI project was made possible by the U-M departments of Astronomy and Physics; the U-M College of Literature, Science, and Arts; the U-M Office of Research; and the university administration.

The research is funded by DESI and DOE, grant number DE-SC0007859. DESI is a $55 million international project that is managed by the Lawrence Berkeley National Laboratory. This research is supported by the Director, Office of Science, Office of High Energy Physics of the U.S. Department of Energy under Contract No. DE–AC02–05CH11231; additional support is provided by the U.S. National Science Foundation, Division of Astronomical Sciences under Contract No. AST-0950945 to the National Optical Astronomy Observatory; the Science and Technologies Facilities Council of the United Kingdom; the Gordon and Betty Moore Foundation; the Heising-Simons Foundation; and by the DESI Member Institutions.

This story was written by Aimee Balfe and Carol Rabuck.