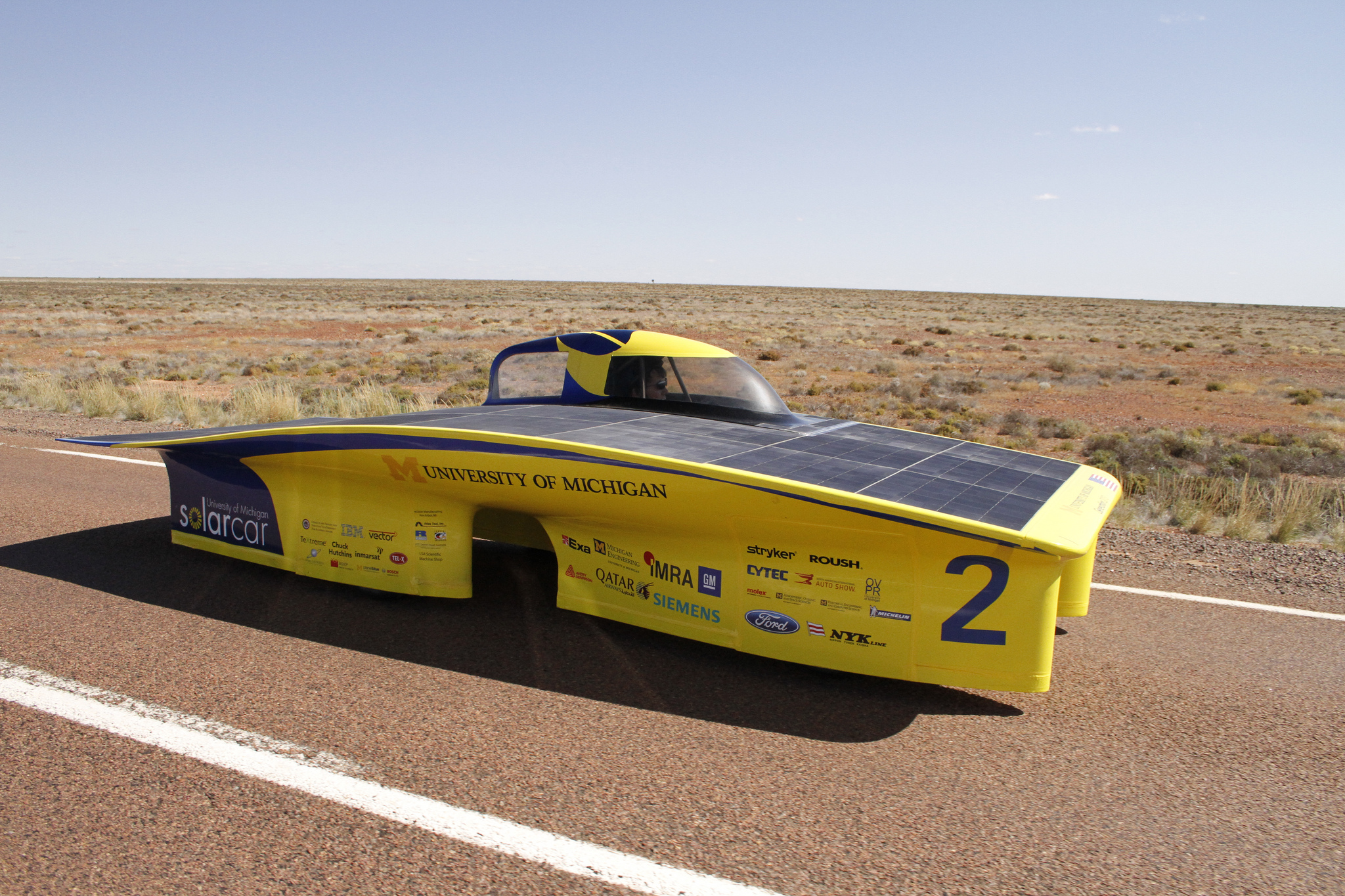 U-M’s team—currently No. 1 in the U.S.—will compete against 25 others from across the globe in the Bridgestone World Solar Challenge. The week-long, 1,800-mile trek across the Australian outback begins Oct. 6, which is the afternoon of Oct. 5 in the U.S.

For the past quarter century, the race has happened every other year, and Michigan has finished third five times. The 2013 vehicle, Generation, makes the best of new regulations that require four wheels and a more upright driver. Like a motorcycle with a sidecar, Generation situates the driver on one side, rather than in the middle of the chassis. The design allows for a sleeker underbelly and a more aerodynamic silhouette. The car weighs less than 600 lbs and has a lithium ion battery and a carbon fiber body.

In Generation, the students say they’ve achieved a powerful combination that could best their predecessors’ results.

“We’ve come up with what we think is the most optimal design and, in addition, we’ve been able to test it thoroughly. So I think that will give us a huge advantage,” said Eric Hausman, team project manager and senior in industrial and operations engineering.

“Sometimes we’ve had a great design when there’s a rule change, but we haven’t had time to test it. Other times, it’s been the opposite, but this year I think we’ve balanced design and testing really well.”

Since unveiling Generation in June, the students have taken it on a 1,000-mile practice race on home soil and a longer one in Australia. It’s been remarkably reliable, Hausman says. A dependable car means less race time spent on the side of the road. In 2011, the team had to stop twice in one day to repair torn wheel fairings while the first- and second-place teams pulled ahead.

The students don’t want to comment on their strategy, except to say that they did practice passing other vehicles in case they need to. U-M is one of four teams in the race that have chosen asymmetrical designs. The others include 2011 first- and second-place teams Tokai University from Japan and Nuon from the Netherlands.

Drivers will take turns in three- to six-hour shifts. Kyle Chudler, a junior in atmospheric, oceanic and space sciences, described what it’s like at the wheel of Generation.

“I always say it handles like a Porsche but accelerates like a go-kart,” Chudler said. “It handles really well but it doesn’t have the most thrust.”

Pick-up isn’t important in this case, though. Endurance is—for the car and its operators.

“There will be times when you get bored, when you’re just driving through the desert and it’s straight road as far as you can see, but then I just remind myself I’m driving a solar car through the Australian outback.”

Teams have until Oct. 13 to complete the course, but the winner will likely finish by Oct. 10.