U-M Solar Car Team doubles down on a proven design 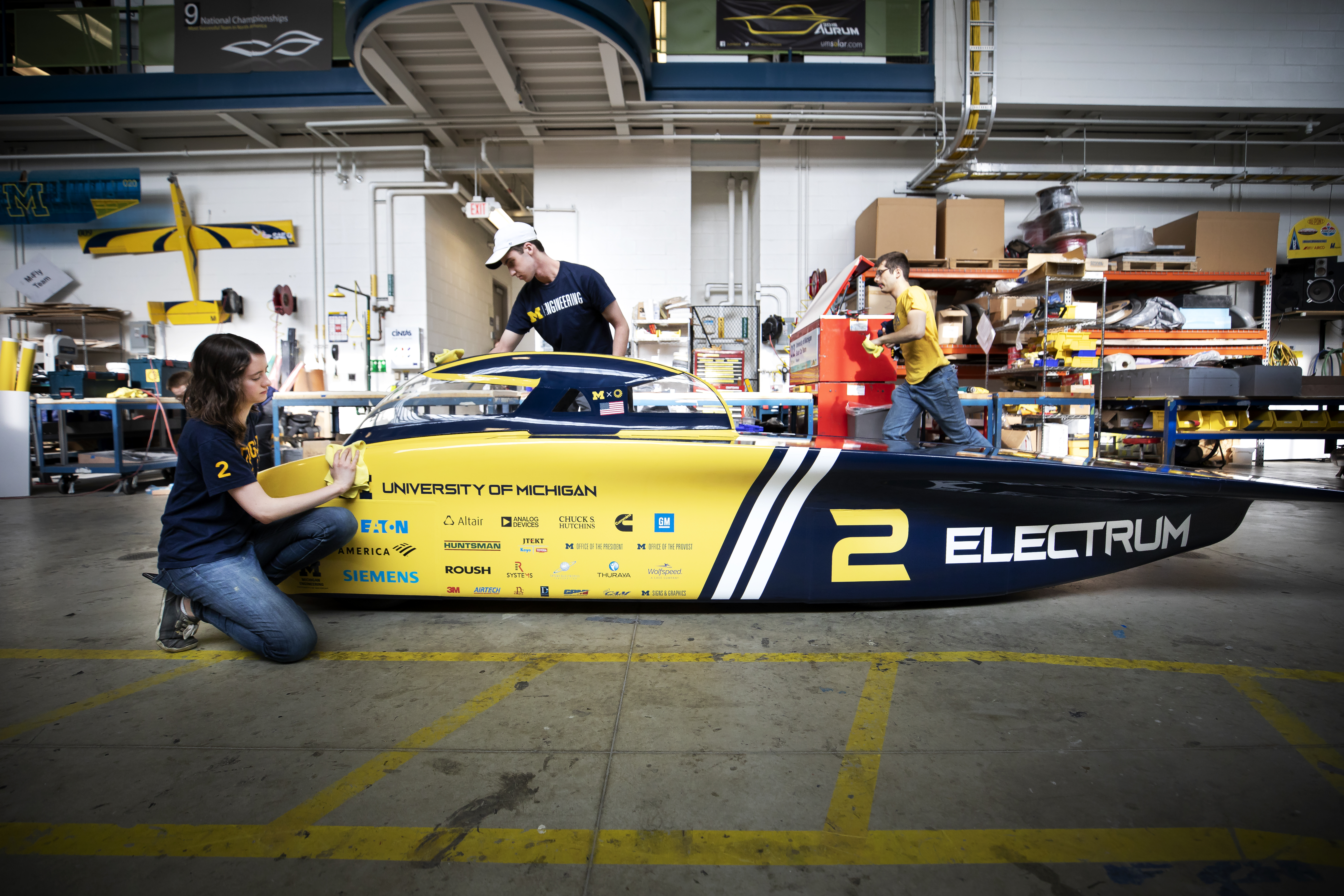 The team unveiled its newest vehicle today at the Automotive Hall of Fame in Dearborn. “Electrum” builds on the tried-and-true design that led to the team’s best-ever world race finish in 2017. That car, Novum, took second place.

Looking at Electrum’s long, slender chassis, you can see Novum’s DNA shining through. This time around, though, the car is slightly more pointed, its cockpit is four inches closer to its nose, and the back of the car where the solar arrays are nested is slightly longer and wider. All of these changes were done to boost aerodynamics and efficiency, said Abigail Siegal, team business director and recent economics grad.

Not only is there more space for solar cells this year, the team maximized it by using a tighter-packing shape. Instead of their typical rectangle cells, they chose trapezoids. The solar cells are multijunction gallium arsenide, the same type the team used last race.

Under the “hood,” Electrum is anything but business as usual. In a major electrical system overhaul, the team ditched its traditional lithium ion battery cells in favor of something more advanced. They won’t disclose details, but they will say they’re seeing double-digit boosts to power efficiency.

The loss taught the group how to build better communications channels, said Rishabh Goel, a rising electrical engineering junior and one of the team’s electrical engineers. He says this year Michigan Solar is much more of a team, and they’ve put in a lot of effort to collaborate and share information. Abby Siegal, the team’s Business Director agrees.

“One of the biggest things the team learned was that we aren’t just making systems. We’re making a car,” she said. “Everything we do has to work together if we’re going to win. We need to do everything we can to peel off seconds or minutes.”

With the unveil in the rear-view mirror, the students will continue manufacturing parts and sourcing material for the next several weeks.

“We’re always trying to find suppliers and companies to partner with the team however they can,” said Zack Piper, a rising mechanical engineering sophomore and team operations director. “Everything we have done so far has prepared us for what’s to come ahead.”

In late August, team members will leave for Australia and continue testing the car. Then, from October 13 through 17, the team will race Electrum through the Australian Outback, competing against more than 40 teams from around the world.

Electrum is the fifteenth car made by Michigan Solar since being founded in 1989. The team has won the American Solar Challenge nine times, had podium finishes in the Bridgestone World Solar Challenge six times, and won its first international championship in 2015 at the Abu Dhabi Solar Challenge. With more than 100 students from schools and colleges across the university, it’s one of the largest student organizations on campus.