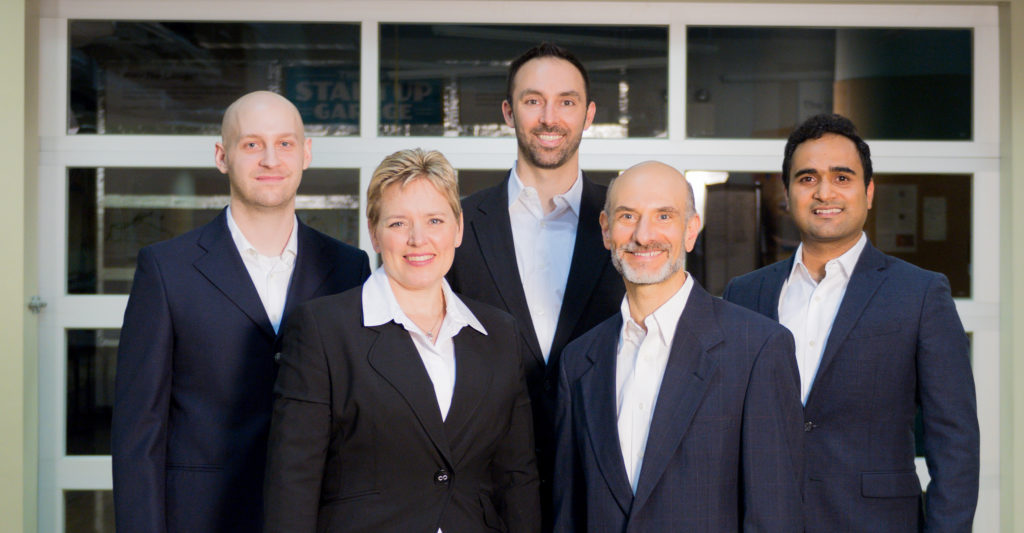 ANN ARBOR—When University of Michigan researchers started getting spontaneous hugs from nurses while testing their system that monitors the autonomic nervous system of hospital patients and predicts problems, they knew they were on to something.

“Any patient within the hospital currently being monitored by an electrocardiogram, or EKG, has the potential to benefit from this product,” said Jen Baird, CEO of Fifth Eye.

Baird, a U-M alum and serial entrepreneur, teamed up with three researchers from the Michigan Center for Integrative Research in Critical Care (MCIRCC) to create the startup with technology licensed from U-M.

The technology interprets a patient’s vital signs and updates every two minutes—critical time in a hospital. The focus is on emergency and critical care patients.

“It can make such a tremendous difference,” Baird said. “We want to see this save lives.”

“The potential application of the technology is large,” said Drew Bennett, associate director for software, mobile and digital technologies at U-M Tech Transfer. “They are using data that is already being generated. They aren’t trying to introduce something new into the clinical setting, but taking advantage of the information that’s already there.”

MCIRCC is collecting the data from 200 hospital beds at Michigan Medicine.

“This product and company is a perfect example of MCIRCC’s strategy to transform critical care through innovation, integration and entrepreneurship,” said Kevin Ward, a co-inventor of technology and executive director of MCIRCC. “The key was bringing together a highly multidisciplinary team committed to developing a life-saving ‘big data’ precision-medicine tool while simultaneously understanding the need to develop and cultivate a crucial business case to move the idea to impact.”

Fifth Eye’s Baird reached out to U-M Tech Transfer to find a new and innovative idea to take into the marketplace. Upon meeting and collaborating with Ward, Salamango, Belle and Benson for nine months, Baird licensed MCIRCC’s Advanced Analytics Platform and two predictive analytics, the Analytic for Hemodynamic Instability and Barreleye.

AHI can predict if a patient will deteriorate several hours before normal vital signs signal a problem is occurring. Barreleye can monitor traumatic and other brain injuries and predict secondary injury for patients.

For example, one patient experienced internal bleeding while recovering from surgery. In a retrospective analysis of the data, using traditional vital signs like heart rate and blood pressure, it took clinicians 37 hours longer to detect problems than the Fifth Eye system would. The technology would have likely improved the patient’s outcome and shortened their stay.

“What AHI does is gives physicians and nurses an early warning of hemodynamic deterioration,” Baird said. “They are excited about this because we can give immediate feedback on the treatment they are trying. Some have even described detecting hemodynamic instability like this as a holy grail of feedback.”

Instead of using traditional vital signs to detect patient deterioration, Fifth Eye analytics uses a single streaming EKG lead. And based on the activity of the heart, it can predict what someone’s body is compensating for.

Developed using machine learning and sophisticated signal processing, U-M invested in collecting patient data from more than 200 hospital beds. This rich data set was used to do initial technology validation on AHI, but the analytic still needs FDA clearance before it can be used with patients. Baird hopes to clear that hurdle in 2019.

“Our bodies are really good about keeping our vital signs in normal ranges,” Baird said. “What we’re detecting is the body’s compensation efforts to keep those vital signs normal.”

“The MCIRCC team knew that they had created a technology with the potential to impact patient care and outcomes at hospitals around the world,” she said. “It’s wonderful when we have the opportunity to connect this type of transformative technology with an experienced entrepreneur so that this vision can become reality.”

Other members of the MCIRCC inventing team include Kayvan Najarian, U-M associate professor of emergency medicine and bioinformatics, and Harm Derksen, U-M professor of mathematics.