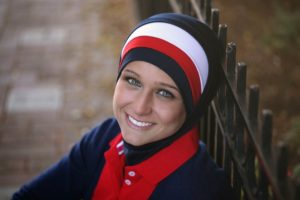 ANN ARBOR—A University of Michigan student who plans to study medicine, public health and forced migration has been named one of 32 Americans chosen as Rhodes Scholars representing the United States.

Nadine Jawad, a senior in the U-M Gerald R. Ford School of Public Policy, will join about 60 Rhodes Scholars selected from other countries as she pursues graduate studies at the University of Oxford in England.

Elliot Gerson, American Secretary of the Rhodes Trust, announced the scholars Sunday. Jawad becomes the 28th U-M student to be named a Rhodes Scholar since the awards were established in 1902.

“When they said my name I was, and still am, in shock. It was as though an entire new life opened up in a matter of seconds,” Jawad said. “There are so many people who could have won this scholarship and I feel somehow I was blessed to win it. I’m most excited to set an example for the girls in my hometown who often times face obstacles when trying to move as close as 30 minutes away from home.

“I also believe this is for my parents and the rest of my family who have worked so hard to provide for me and to build me up to who I am today.”

Jawad, from Dearborn Heights, Mich., is also a Truman Scholar. As student body vice president, she implements policies and initiatives related to underrepresentation in S.T.E.M. She’s the co-founder of Books for a Benefit, a student organization aimed at promoting literacy in low-income communities. She’s also a research assistant in the Carey Lab at Michigan Medicine, and a tutor in the Science Learning Center. 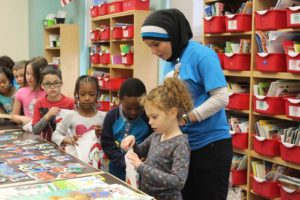 “Nadine is an exemplary student here at the Ford School—and a real leader,” said Ford School Dean Michael Barr, a former Rhodes Scholar. “We’re tremendously proud of her accomplishments that are being recognized by her being named a Rhodes Scholar. We look forward with great enthusiasm to seeing what enormous impact she’ll have in the world building on the opportunities she’s earned.”

“Of Nadine’s many exceptional qualities, the most outstanding is her character. None of her accomplishments are driven by self-promotion,” said Henry Dyson, director of the U-M Office of National Scholarships and Fellowships which nominated Jawad. “In every activity she sees herself as a representative of her family, her communities, her faith, and as a servant to the underserved. Her commitment to service is infectious. She has already inspired countless others to, in the words of the Rhodes Scholarship, ‘fight the world’s fight.'”

At Oxford, Jawad plans to enroll in two programs: International Health and Tropical Medicine; and Refugee and Forced Migration.

Rhodes Scholarships provide all expenses for two or three years of study at the University of Oxford in England. They were created in 1902 by the will of Cecil Rhodes and are provided in partnership with the Second Century Founders, John McCall MacBain O.C. and The Atlantic Philanthropies, and many other benefactors.

Gerson described this year’s class: “This year’s selections—independently elected by 16 committees around the country meeting simultaneously—reflects the rich diversity of America. It includes, among others, ten African-Americans, the most ever elected in a U.S. Rhodes class; African and Asian immigrants; other Asian, Muslim, and Latino Americans; an Alaskan Native; a transgender man, the second self-acknowledged transgender Rhodes Scholar after Pema McLaughlin was elected last year; and four from colleges that have never before elected Rhodes Scholars in the 115 years of the United States Rhodes Scholarships (Hunter College, CUNY; Temple University; the University of Alaska Anchorage; and the University of Maryland, Baltimore County.) They plan to study a wide range of fields across the social sciences, biological and medical sciences, physical sciences and mathematics, and the humanities.”

U-M students interested in applying for the Rhodes Scholarship should contact Henry Dyson in the Office of National Scholarships and Fellowships: hdyson@umich.edu.