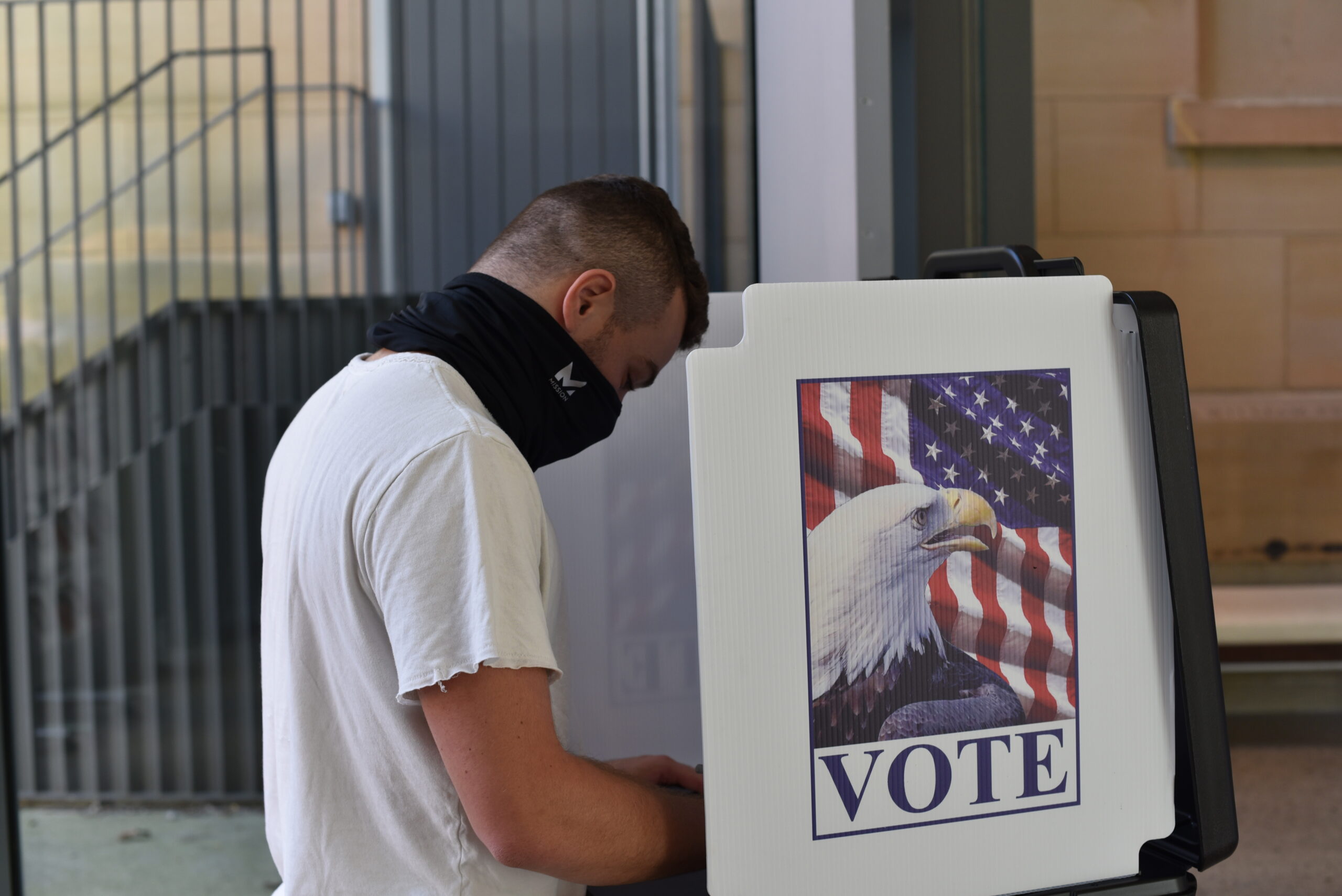 A junior at the University of Michigan School of Kinesiology, Riley Friedman is a first-time voter. Image credit: Fernanda Pires

Voter turnout among University of Michigan college students jumped to 78% in the 2020 election, according to a report released by the Institute for Democracy & Higher Education at Tufts University.

Edie Goldenberg, U-M professor of public policy at the Ford School of Public Policy and political science at College of Literature, Science, and the Arts, served as a key adviser for Turn Up Turnout, a nonpartisan student-led get out the vote initiative. In spring 2020, Goldenberg hoped for a 75% turnout rate, but predicted closer to 65%.

“To surpass our aspirational target in the middle of a pandemic is both surprising and exciting,” Goldenberg said. “This was an all-campus effort. Our student volunteers worked very hard. I am grateful for the faculty, staff and university leaders who pulled together to help students get the information they needed in order to vote and have their voices heard. I’m also grateful to our city clerk, who was a wonderful partner and a real hero in the face of daunting health challenges in 2020.”

Josiah Walker, who served as president of Turn Up Turnout during the 2020 election, attributed turnout success to the collaborative efforts between student organizations, university units, elected officials and nonprofit and corporate leaders.

“We synthesized local, state and federal election laws, executed a dynamic voter engagement plan, and, most importantly, delivered groundbreaking student voting results,” he said. “Our ability to think and learn from past experiences made it possible for us to be successful in the face of the ever-changing voter registration laws and the pandemic.

“With the state of Michigan being a swing state and Gen Z being one of its largest voting blocs, University of Michigan students played a key role in the 2020 election and beyond. Each year keeps getting better.”

Voter turnout reflects nonpartisan, campuswide efforts to increase voter education, registration and engagement. In addition to Turn Up Turnout, U-M once again participated in the Big Ten Voting Challenge, a collaboration initiated by U-M President Mark Schlissel and his presidential colleagues in 2017 to increase voter registration and turnout across the Big Ten schools. The Ginsberg Center provides leadership to the campus and conference efforts.

“It is really gratifying to see U-M’s registration and voting rates for 2020, which are up across the board,” said Dave Waterhouse, interim co-director of the Ginsberg Center. “A lot of folks on our campus have worked hard to make that happen. The work to involve students in our democracy at all levels, and throughout the year, will continue as we build on the momentum of the 2020 election season. This work matters, now more than ever.”

The campus coalition was broadened and strengthened to make student voting more accessible in 2020. In partnership with City Clerk Jacqueline Beaudry, the Creative Campus Voting Project—co-led by Stamps School of Art & Design faculty Stephanie Rowden and Hannah Smotrich—designed the Ann Arbor City Clerk’s Satellite Office at U-M Museum of Art. The project facilitated the registration of 5,412 voters and the collection of 8,501 ballots.

“Our goal was to make it very clear, easy and welcoming for students to vote,” Smotrich said. “We were able to transform a city clerk’s office, which is traditionally a bureaucratic, institutional space, into something that is beautiful and dynamic—we hope that seeing a space like this inspires students to vote.”

Plans for 2022 include another satellite office collaboration with the museum and a new pop-up office in the Duderstadt Gallery on North Campus.

Students also participated in the university’s Democracy & Debate Theme Semester, co-chaired by Ford School Dean Michael Barr and then-Vice President for Government Affairs Cynthia Wilbanks, which included an array of programming, courses, speakers and other opportunities for learning. Millions of users engaged online during the semester and the educational initiative continues in 2021-22.

The Democracy & Debate work is continuing this year, co-chaired by Barr and LSA Dean Anne Curzan. In launching the activity again this fall, Curzan said “it feels essential that we as an institution sustain our focus on what it means to be a member of a democratic society, in the U.S. and globally.”

“We are committed to open, informed dialogue about key issues, from free speech to voting access to structural inequalities, as part of our mission to contribute to the common good and create more sustainable and just societies,” she said.

Barr said our democracy is strong “when we nurture and protect it every day, not simply in an election season.”

“Our programming this year will help to engage students, faculty, staff and alumni and educate the broader public on critical local, state, national and global issues,” he said.

Catherine Carver, who co-led the initiative last year, continues in that role this academic year.

Additional findings from the IDHE study about U-M student voting: