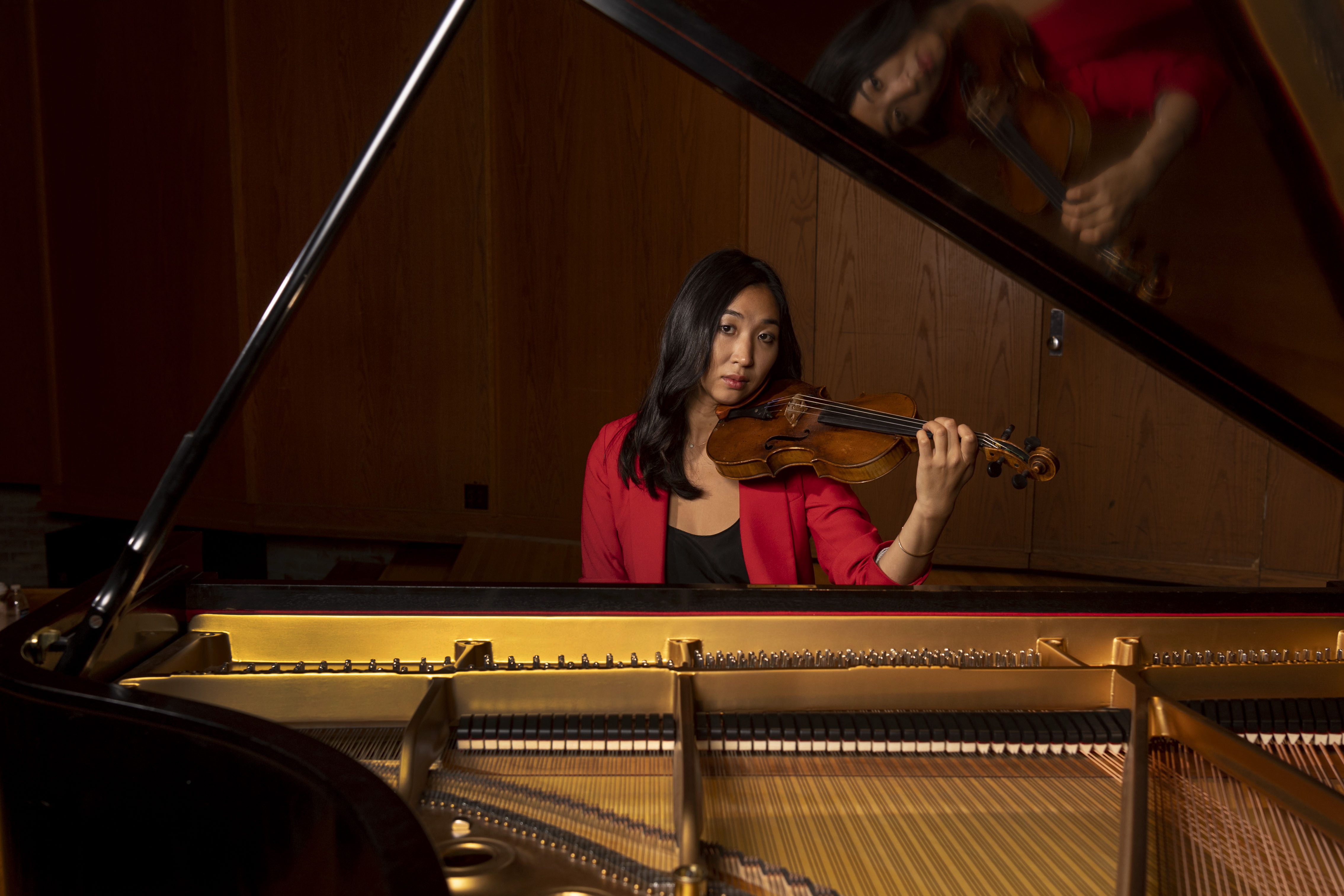 ANN ARBOR—Following the September release of her album “My Time Is Now”—the first recording to make use of George Gershwin’s recently restored piano at the University of Michigan—violinist and New York City-based alumna Haerim Elizabeth Lee will perform with pianist Alex Brown at Britton Recital Hall Oct. 28.

Lee had just begun her D.M.A. when she attended the Gershwin Initiative’s inaugural concert at U-M in 2013, which featured a performance on Gershwin’s personal Steinway from his New York apartment. Drawn to the sonority and sweetness of the instrument, Lee knew immediately that she wanted to create and record music with it.

The Gershwin piano was gifted to the U-M School of Music, Theatre & Dance as part of the launch of the U-M Gershwin Initiative, an effort dedicated to creating a new and complete critical edition of the Gershwins’ work.

The title of Lee’s project is taken from a George Gershwin quote that has inspired her approach to music: “My people are American, my time is today. Music must repeat the thought and aspirations of the times.” These words led Lee to look beyond the classical genre to draw influence from world music, jazz and from everyday contemporary life.

Like Gershwin, Lee hopes to expand the repertoire of classical music.

Grammy-nominated pianist Brown, who plays Gershwin’s Steinway on “My Time is Now,” is a classically trained jazz musician, which was important to Lee as part of her goal to push the boundaries of classical music. She specifically wanted a pianist who could improvise in his work as Gershwin had done.

Though Gershwin never wrote music for the violin, Lee and Brown made use of existing arrangements while crafting new arrangements for melodies that Gershwin had written but never finished. “My Time is Now” also features the first arrangement of “Embraceable You,” one of Gershwin’s most famous tunes, for violin and piano.

The original works play off of Lee and Brown’s arrangements of Gershwin’s tunes; in one example, Harlan’s “#TBT”—short for “Throwback Thursday”—incorporates pieces of Gershwin’s music to create something new.

Lee considers the opportunity to work with Gershwin’s Steinway a great privilege and recognizes the instrument as another artistic collaborator.

“Just as my violin influences the way I perform, there’s no way that Gershwin was not inspired by the sound of his own piano and what would sound good on that piano. You’re really capturing the sound he would have heard and the way he would play a passage, and just play with the sound.”
Elizabeth Lee

Now based in New York, Lee is looking forward to returning to Ann Arbor for the performance. Acknowledging the support of the U-M School of Music, Theatre & Dance and the Gershwin Initiative, as well as her professors and fellow students, she called the album “a labor of love from the entire school.”

“It’s my way of returning the inspiration. It is my hope that, just as I was inspired by my classmates and professors, I can pay it forward to the community in Ann Arbor,” Lee said. “I’m hoping that through the music and through my story—not to sound cheesy—but that people can take a moment to really appreciate what you have here, because you never know what’s going to inspire you.”

Lee will perform the entire album with Brown at U-M’s Britton Recital Hall on Oct. 28. at 7:30 p.m. The recital is free and open to the public.