ANN ARBOR—The University of Michigan is exploring the possibility of hosting a presidential debate during the 2020 campaign. 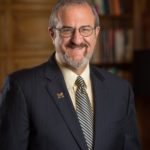 The commission today released the names of six institutions or communities that submitted letters of interest. The next step will be the submission, later this month, of a more detailed plan for hosting a debate. The commission is expected to make final decisions on debate hosts in late summer.

In his letter to the commission, Schlissel said the university was a natural to host a presidential debate.

“As one of the country’s premier public universities, the University of Michigan is poised as an ideal venue for a presidential debate. Our 200-year history is steeped in a tradition of public service,” he wrote.

“Not only are we the alma mater of President Gerald R. Ford, but also it was on the very steps of the Michigan Union that presidential hopeful John F. Kennedy delivered his impromptu speech in 1960 announcing his vision of what would become the Peace Corps. The tradition of public service and public engagement is at the core of the mission of the University of Michigan.

We stand at a unique moment in our nation’s history. These are challenging times, with fractious political discourse, gridlock and partisanship in our nation’s capital, and an increasing lack of trust in institutions everywhere.

“We stand at a unique moment in our nation’s history. These are challenging times, with fractious political discourse, gridlock and partisanship in our nation’s capital, and an increasing lack of trust in institutions everywhere.”

He also highlighted the university’s efforts to bridge the political divide in the nation by bringing policy experts and policymakers of different viewpoint to campus.

“In the last year, ‘Conversations Across Difference,’ hosted by the Ford School, has brought together policy experts, such as Neera Tanden and William Kristol, and policymakers, such as Representatives Debbie Dingell and Fred Upton, to engage in substantive dialogue of this country’s pressing issues,” Schlissel wrote.

“The university’s commitment to the importance of such dialogue for the future of our democracy underpins our interest in hosting a Commission on Presidential Debates event.”

Schlissel said the university was up to the challenges of hosting such an important event. There is a $2.5 million fee for hosting a presidential debate and there will be additional expenses for facility use and the specific needs of such an event.

As an institution and a community that routinely hosts 110,000 visitors to campus for home football games, “we are fully cognizant of the challenges such an undertaking entails,” Schlissel wrote.