ANN ARBOR—Perhaps more than any modern filmmaker, John Sayles personifies American individualism. From his 1979 directorial debut “Return of the Secaucus 7” to his forthcoming release “Go for Sisters,” he has thrived outside the Hollywood mainstream, using his films to explore such complex, nuanced themes as race, class and gender identity.

Critics say Sayles is a true iconoclast who sees film as a means to an end and not an end in itself.

Now, thanks to a gift to the University of Michigan Library, documents, images and props illuminating Sayles’ vast body of work will be made available to researchers in the John Sayles Archive at the Special Collections Library.

“The John Sayles Archive is a scholarly treasure trove for students, faculty and anyone interested in exploring the inner workings of this artist,” Coleman said.

The Sayles acquisition complements U-M collections documenting the careers of American filmmakers Orson Welles and Robert Altman. With the Sayles collection, U-M is a major destination for research on the American maverick filmmaker.

“These are three independent thinkers and artists, not traditional filmmakers consistently supported by the studios,” said Philip Hallman, the film studies librarian at the U-M Library. “They are all American mavericks with much to teach us not only about film but about our shared heritage, culture and society.” 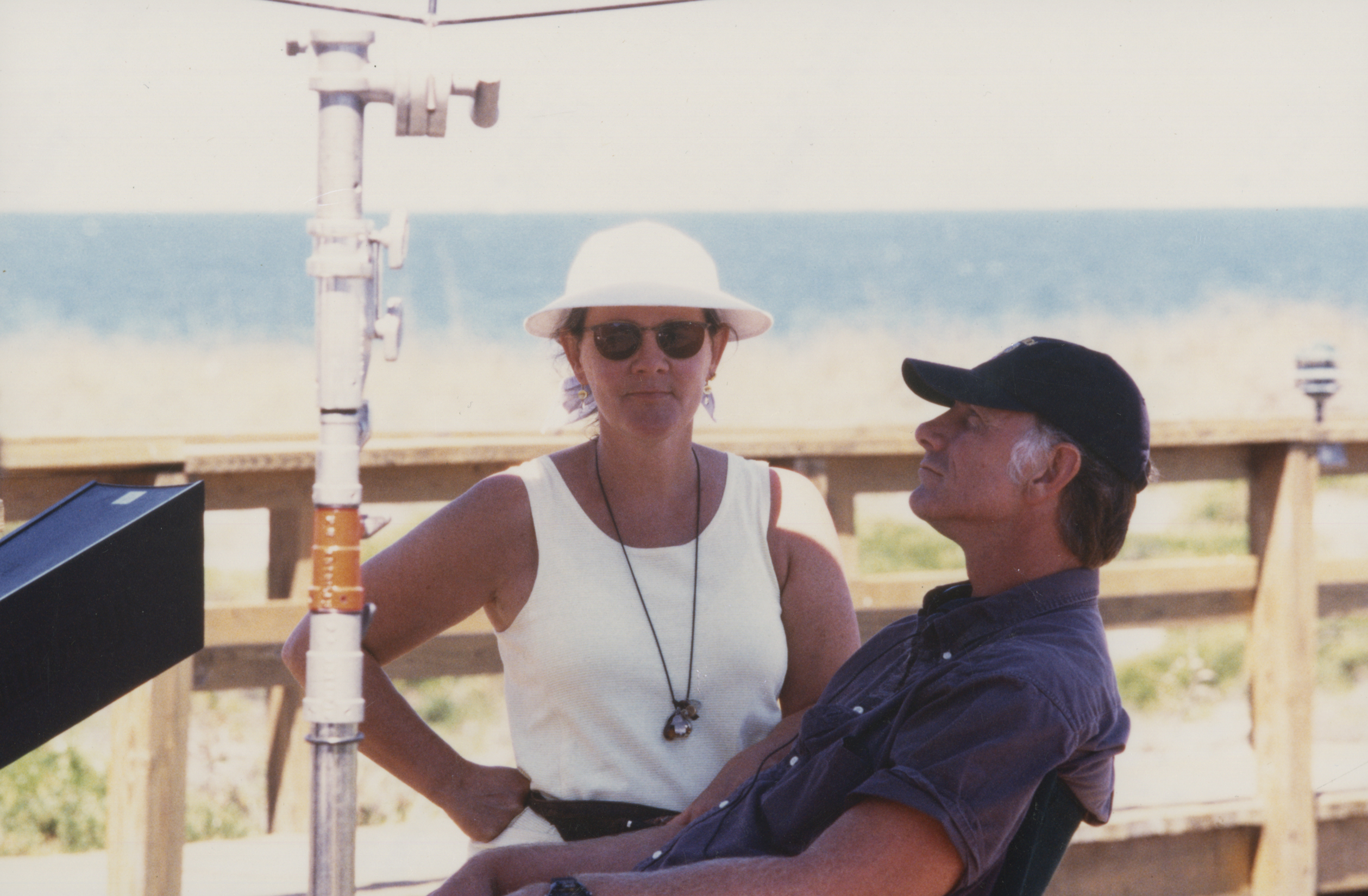 Maggie Renzi and John Sayles on location during the filming of “Sunshine State “(2002). Image courtesy of the U-M Special Collections LibrarySayles and his longtime producing partner, Maggie Renzi, donated the John Sayles Archive to U-M in September 2013. The collection includes approximately 230 boxes of archival material spanning Sayles’ entire career, up through the soon-to-be-released “Go for Sisters.”

“The fact that John Sayles is a contemporary filmmaker producing new work as we speak is significant,” Hallman said. “His is what we call a ‘living collection,’ providing researchers with unparalleled opportunities for discovery and insight.”

Sayles’ films themselves are housed at the UCLA Film & Television Archive. The U-M collection includes scripts, production documents, legal documents, photographs, storyboards and correspondence regarding such films as “Matewan,” “Brother from Another Planet,” “The Secret of Roan Inish” and more. There are personal journals and notebooks, business records and props. Also included are manuscripts of some of Sayles’ novels, short stories and plays. The archive even showcases his uncredited work as a writer on such films as “Apollo 13.”

These items will be available to the university community as well as the general public. Perhaps among the first to use them will be students in U-M’s winter 2014 Department of Screen Arts & Cultures class Major Directors. Students will research and develop an exhibit about Sayles and his work for display in spring 2014. A Sayles symposium in June will coincide with Cinetopia, an annual Ann Arbor-based film festival. Lectures and screenings will complement the symposium and student-driven exhibit.

“Students enjoy a much deeper learning experience when they engage in the actual exploration of the archive,” U-M Library archivist Kathleen Dow said. “The thrill of discovery is a wonderful supplement to the student’s introduction to research and critical thinking. We acquire archival material in the hope that it will be used in exactly this way.”

Renzi points to this kind of hands-on activity and practical scholarship as the primary reason she and Sayles chose U-M to house the archive. Michigan’s ability to integrate academic disciplines across colleges and schools mirrors Sayles’ artistic and intellectual breadth. His archive offers a unique point of entry into myriad topics, from the art and business of the creative process to the provocative themes of political unrest, class warfare, racial discrimination and more.

“We chose the University of Michigan over other excellent archives and libraries because we wanted to see John’s work studied as part of the curriculum at a great university,” Renzi said. 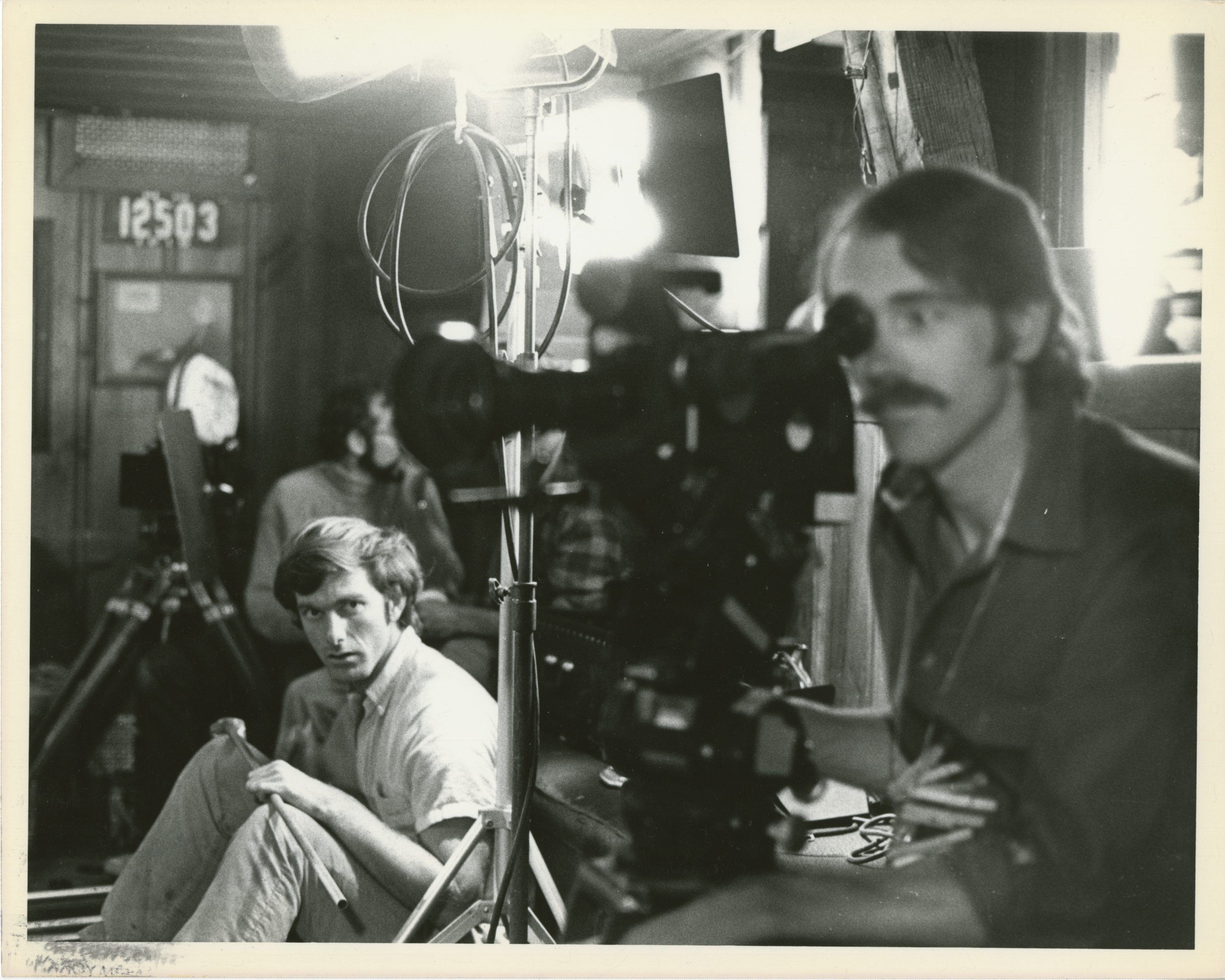 Director John Sayles and cinematographer Austin De Besche during the filming of “Return of the Secaucus 7” (1979). Image courtesy of the U-M Special Collections LibraryAs a director, Sayles taps into his own experience as an actor, screenwriter, playwright and novelist. He garnered near-unanimous critical acclaim with his directing debut, the self-financed character study “Return of the Secaucus 7,” which he also wrote. His 1992 movie “Passion Fish” earned Academy Award nominations for best original screenplay for Sayles and best lead actress for Mary McDonnell. The Oscar-nominated “Lone Star,” set in a Texas border town, earned Sayles a best screenplay nod in 1997 and firmly established the writer-director as a voice of social consciousness in America.

Sayles has penned close to 100 screenplays throughout his career, and November 2013’s “Go for Sisters” marks the 18th picture he has both written and directed.

As American mavericks, Sayles, Altman and Welles each cultivated a distinct artistic vision. Taken together, their work exhibits an independent and often defiant quality that stands outside the conventions and conservative sensibilities of corporate studio filmmaking. Their portrayals of American life—from Welles’ iconic “Citizen Kane” to Altman’s “Nashville”— have evoked some of the most memorable moments in cinematic history. Sayles’ 1988 baseball picture “Eight Men Out,” about the 1919 Black Sox scandal, was his first screenplay; it is as relevant today as it was on its debut 25 years ago.

John Sayles Biography
Born in Schenectady, N.Y., in 1950, John Sayles graduated from Williams College in 1972. In the late 1970s he worked for infamous low-budget producer Roger Corman, and soon learned he could finance his own independent films through earnings as a screenwriter.   Sayles has directed 18 films and collected numerous nominations and awards. His 1979 directorial debut, “Return of the Secaucus 7,” is preserved in the National Film Registry at the Library of Congress.

Sayles published his first novel, “Pride of the Bimbos,” in 1975, followed by 1978’s “Union Dues,” which was nominated for a National Book Award and a National Critics’ Circle Award. His other novels include “Los Gusanos” (1990) and “A Moment in the Sun”(2011). His short story collections include “The Anarchists’ Convention” (1979) and “Dillinger in Hollywood” (2004).

Sayles has worked with creative partner and producer Maggie Renzi since 1978. He is known for casting a recurring repertory of actors, including Chris Cooper, David Strathairn and Gordon Clapp.

In 2014 Sayles will receive the Modern Language Association’s Phyllis Franklin Award for Public Advocacy of the Humanities.

About the Orson Welles Collections 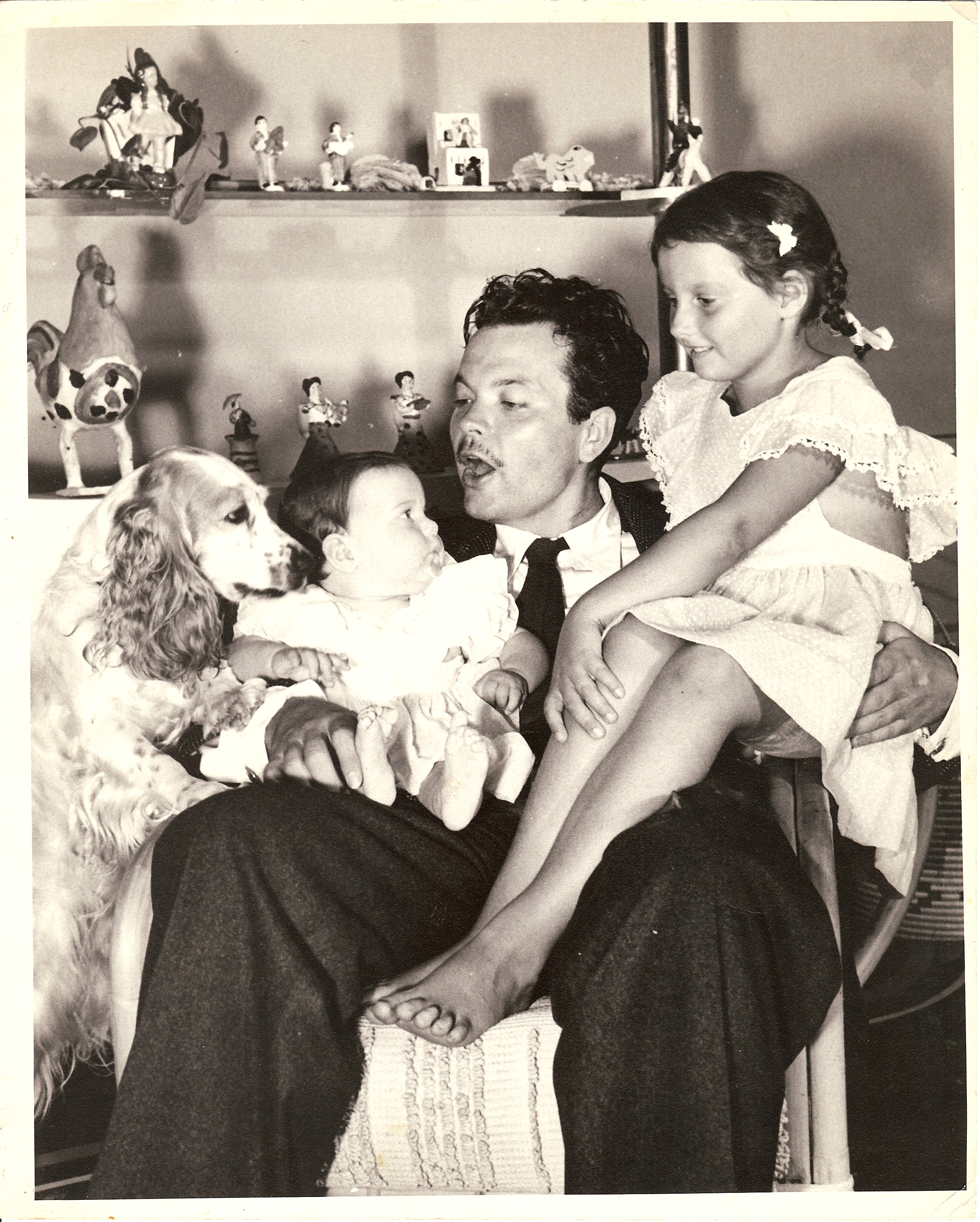 Family man Orson Welles, 1945, pictured with his two daughters, Chris Welles Feder (right) from his marriage to Virginia Nicolson, and infant Rebecca Welles Manning, from his marriage to actress Rita Hayworth. Image courtesy of the U-M Special Collections LibraryFilmmaker Orson Welles (1915-85) was an American actor, director, writer and producer who worked in theater, radio and film. He achieved international notoriety in 1938 for a radio production of H.G. Wells’ “War of the Worlds,” which listeners unwittingly interpreted as an actual Martian invasion of Earth. Welles is perhaps best known for the movie “Citizen Kane” (1941), which he co-wrote, directed, produced and starred in.

The University of Michigan Special Collections Library is home to four Welles’ collections:

The collections include thousands of documents, letters, telegrams, scripts, production and financial statements, photographs, illustrations and audiovisual materials. The Welles Feder collection is the newest acquisition, donated by Welles’ daughter in 2012.

About the Robert Altman Archive 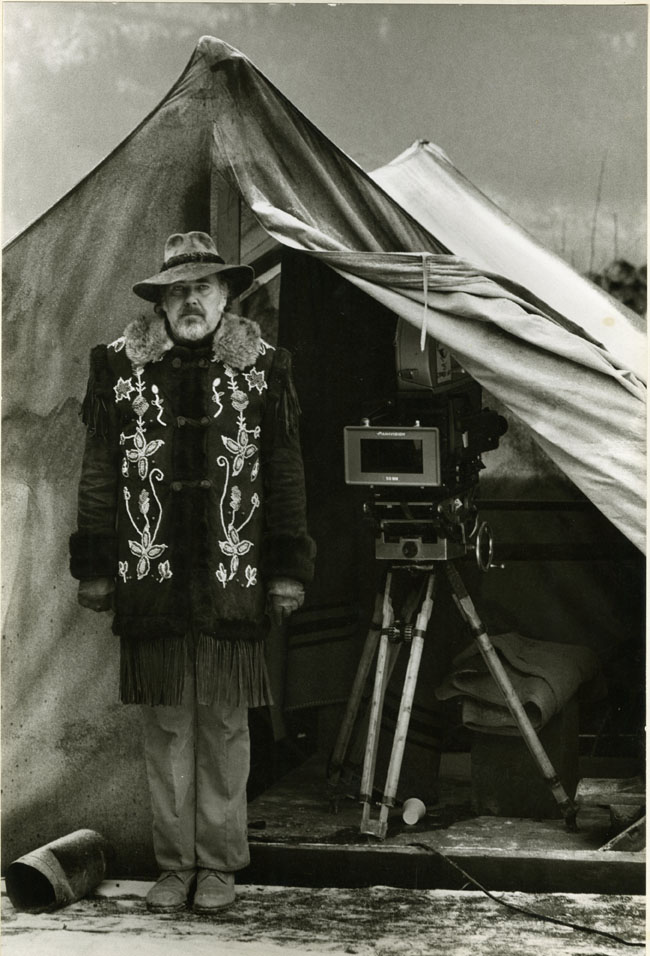 Robert Altman on the set of “McCabe & Mrs. Miller” (1971). Image courtesy of the U-M Special Collections LibraryRobert Altman (1925-2006) was an American director, producer and screenwriter. Throughout his career, he developed a highly naturalistic and slightly subversive signature style. He was nominated for five Academy Awards in the directing category. In 2006, he received an honorary Oscar. The filmmaker had strong ties to U-M: he taught classes, directed a Stravinsky opera and filmed “Secret Honor” on the campus. His extensive archive covers more than 1,000 linear feet of shelf space and includes 3,800 pieces of audiovisual material, as well as photographs, papers, letters, drawings, props and other artifacts regarding such films as “M*A*S*H,” “Gosford Park,” “Nashville” and more.