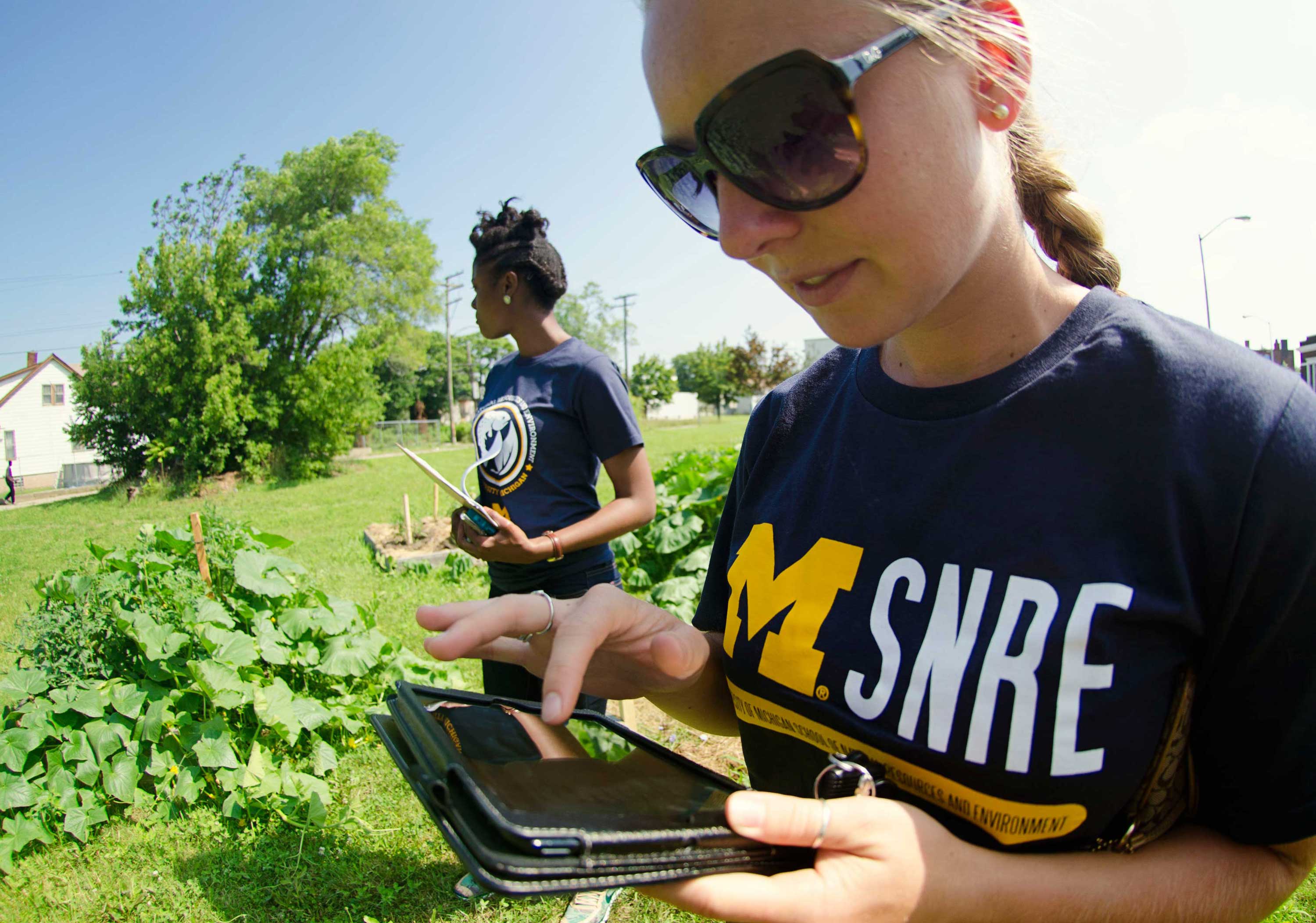 SNRE students Jasmine Omeke and Mariel Borgman survey a block in Detroit’s east side during a 2013 SNRE-led project to understand how vacant land in the city is used. Image credit: Dave Brenner/SNREANN ARBOR—The University of Michigan is one of nine research universities in a new international effort, funded by a $12 million award from the National Science Foundation, to build better cities of the future.

The University of Minnesota-led project brings together scientists, industry leaders and policy partners committed to creating cities that are highly functional, that promote the health of residents and the environment, and that have that intangible vibe, called livability, that makes cities desirable places to live and work.

The new project, funded by NSF’s Sustainability Research Network, will focus on ways to reimagine the energy grids, road networks, green spaces, and food and water systems that form the urban infrastructure. Emerging trends suggest that cities may be better off building more local systems; this movement toward “distributed” infrastructure is gaining momentum globally.

“We have to think in new ways about a city’s physical infrastructure to develop sustainable solutions,” said Anu Ramaswami of the University of Minnesota, the project’s lead investigator and director. “Understanding that these systems are interconnected serves as a foundation for this work.”

The University of Michigan portion is roughly $750,000 over four years and involves green infrastructure, urban farming—including a Detroit aquaculture project to raise freshwater shrimp—and the investigation of innovative techniques to recover energy and water from wastes.

But such projects tend to be driven by stormwater management goals, with few studies examining tradeoffs and potential synergies between a suite of benefits, said SNRE’s Newell.

“We need to consider how these green-infrastructure interventions affect a city’s environmental and social-justice fabric. Are they being placed in communities and neighborhoods that may be especially vulnerable to climate change or that suffer from park poverty?” Newell said. “We need to do a much better job at identifying hotspots in the urban landscape that offer the potential to maximize benefits for the many, rather than the few.”

The model will be refined using data collected during case studies in Detroit, New York City and Minneapolis-St. Paul. 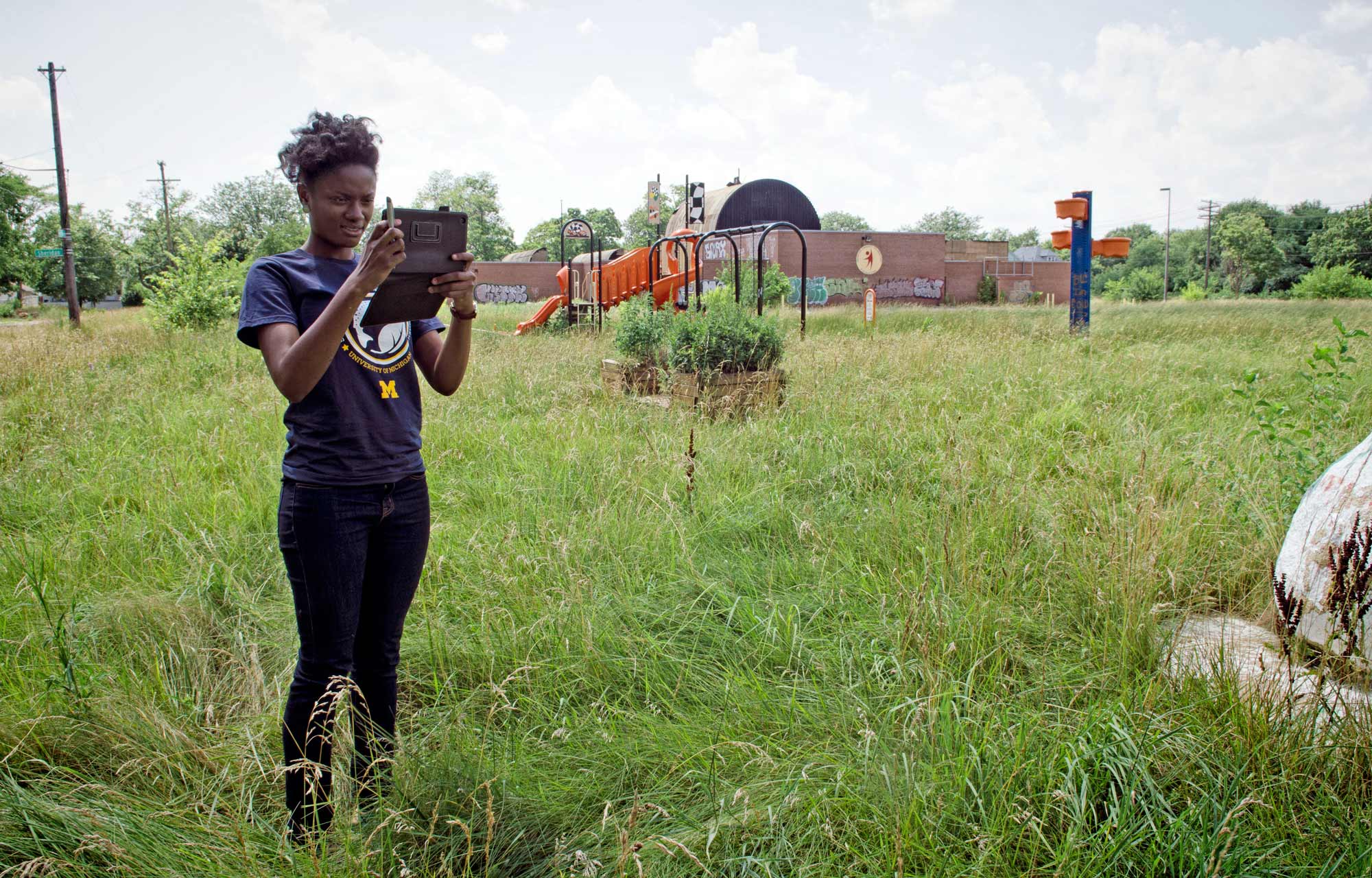 Jasmine Omeke photographs footpaths across an abandoned school yard, in the Detroit’s East side in 2013. Image Credit: Dave Brenner/SNRE Raskin’s team will use the hotspots identified by Newell to select locations suitable for the development of community-scale waste treatment systems that recover water and energy from a variety of sources.

A technology called an anaerobic membrane bioreactor will recover energy in the form of methane gas from household wastewater, food waste, garden waste and urban food-production waste. Effluent produced by the bioreactor can be used directly as irrigation water or treated further to produce drinking water.

“The feasibility of using an anaerobic membrane bioreactor in conjunction with urban food production in Detroit will be examined,” Raskin said. “This urban test bed will include a recirculating shrimp aquaculture system focused on the distributed production of freshwater shrimp.”

Michigan faculty collaborators include Steven Skerlos of the College of Engineering and Jim Diana of SNRE and Michigan Sea Grant. Several U-M graduate students and postdoctoral researchers also will be involved.

The project includes 25 faculty members from the nine universities and will involve more than 40 graduate students conducting research in cross-university interdisciplinary teams.

By 2050, it is estimated that 3 billion additional people will inhabit cities worldwide, meaning that two-thirds of the world’s population will live in urban areas. Most of the infrastructure needed to accommodate that growth has yet to be built or will need to be rehabilitated from existing systems.

The NSF-funded researchers will try to identify the optimal infrastructure mix by examining local and large projects in diverse cities in the U.S. and India. In addition, they will explore the public attitudes and policies that can help achieve the desired urban transitions.

In Theme 3, researchers will use knowledge gained in Themes 1 and 2 to model various policy and technology scenarios in diverse world cities. They will examine small, fast-growing cities like Fort Collins, Colo.; shrinking cities like Detroit; stable cities with aging infrastructure like New York City and Minneapolis-St. Paul; and emerging Indian cities that hope to leapfrog into next-generation infrastructure systems.