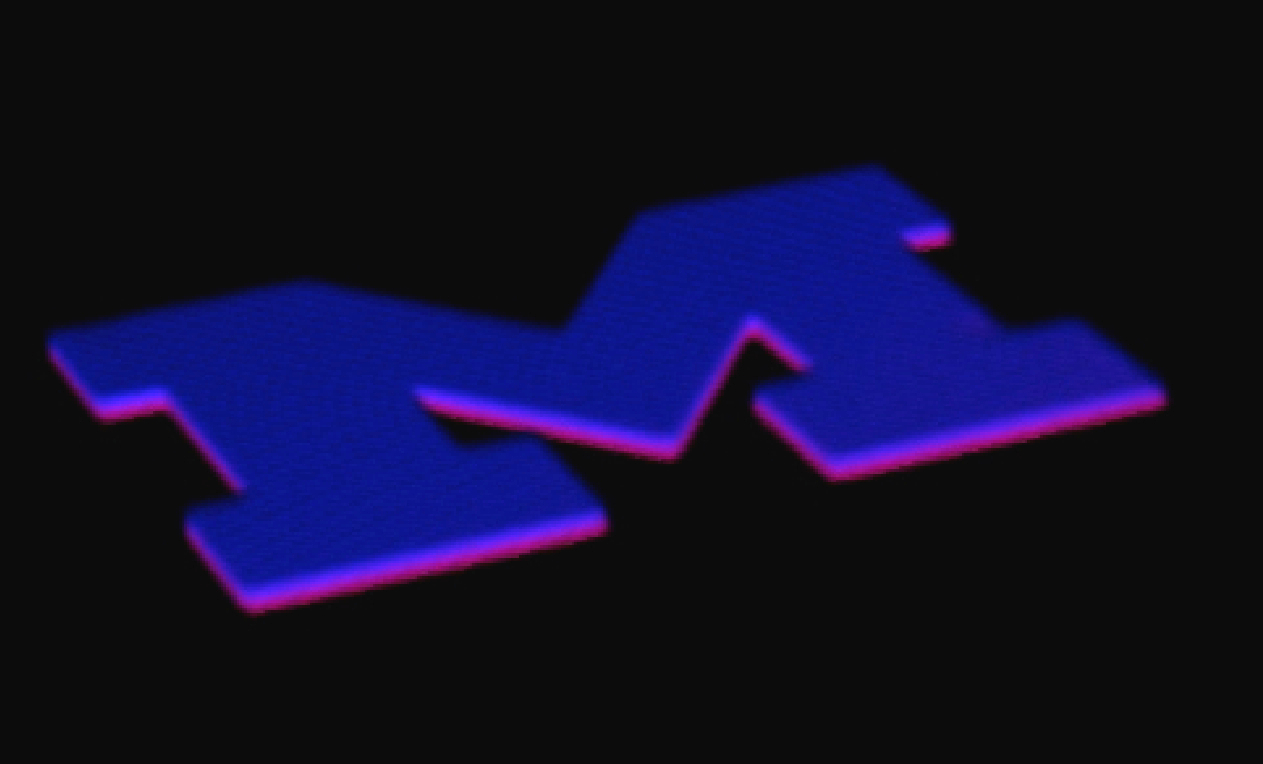 Magenta and blue delineate the different plastics in this two-layer Block M that University of Michigan researchers made to demonstrate their new nanomanufacturing process, which could advance drug delivery. Image courtesy Sai Pradeep Reddy KobakuANN ARBOR—By making what might be the world’s smallest three-dimensional unofficial Block “M,” University of Michigan researchers have demonstrated a nanoparticle manufacturing process capable of producing multilayered, precise shapes.

The researchers say their technique may pave the way to medications that can target specific cells, deliver multiple drugs at different times and rates, and even allow doctors to steer the drugs to particular locations in the body. They could also offer researchers better ways to test new therapies.

The new method produces particles that can be 10 or more layers thick—to incorporate several courses of drug treatments, metals, plastics or virtually any other material. They can be made in precisely controlled sizes and shapes as small as 25 nanometers across. At 115-by-160 microns and 3 microns thick, the mock Michigan logos are each about the size of a grain of sand. A micron, or micrometer, is one-thousandth of a millimeter.

“The Block ‘M’s’ were a test,” said Anish Tuteja, U-M assistant professor of materials science and engineering and a developer of the process. “This opens up all sorts of opportunities for combining different polymers and molecules in a variety of shapes. And because it’s simple and low-cost, we can explore new possibilities much more easily than in the past.”

Researchers say one of the first applications could be in chemotherapy, where their ability to incorporate several layers could enable drug makers to combine different chemotherapy drugs and target multiple types of cancer cells with a single treatment. They could also layer in magnetic materials that enable doctors to steer the drugs toward tumors.

Another key trait is the particles’ flexible shape, size and makeup, which may enable doctors and drug makers to optimize medications to more effectively target cancer cells and do less damage to healthy cells.

“Different types of cancer have different cell structures, and each type can internalize nanoparticles in a different way,” said Geeta Mehta, U-M assistant professor of materials science and engineering, who is working on the project. “We can easily tailor the shape and drug combinations of these new particles to each type of cancer so that they’re more effective against cancerous cells and less harmful to healthy cells.”

While any new treatment is likely five-to-10 years out, the team hopes to have an early iteration of the medications available for testing within one to two years.

The particles’ versatility and relatively simple production process also makes them useful in the lab for testing new treatments, and for gaining a better understanding of exactly how medications interact with cells.

“The University of Michigan has an extensive library of new cancer drugs in development, and I think these particles are going to help us understand how to use them most effectively,” Mehta said. “We can easily try new combinations of drugs and different particle shapes, and we can include dyes and other markers to see how they behave inside a cell.”

The particles may be useful for other drug delivery applications as well, including inhalable vaccines and time-release prescription drugs that could be taken far less frequently than current medications. 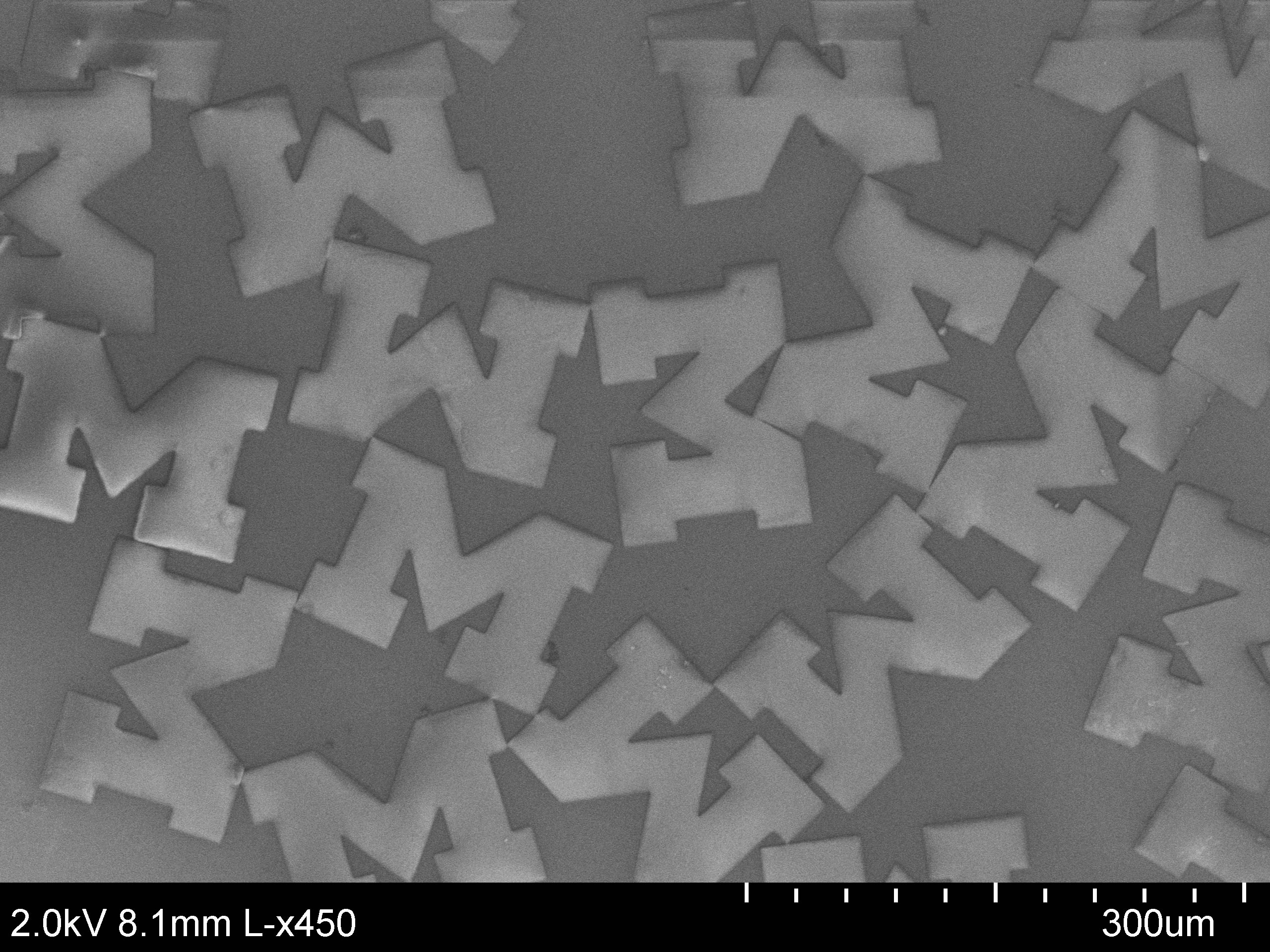 Three-layer Block M nanoparticles under an electron microscope. At 115- by 160 microns and 3 microns thick, the mock U-Michigan logos are each about the size of a grain of sand. Image courtesy Sai Pradeep Reddy KobakuWhile researchers have successfully created multilayered nanoparticles in the past, these particles are the first to combine that capability with precise control over the particles’ shape, size and composition.

The research team began the production process with a silicon wafer that has a liquid-repellent coating. They used ultraviolet light to etch away the coating in the shape of the final particles. Finally, they dipped the etched wafer into a liquid containing their polymer dissolved in a solvent. The liquid settled only on the etched areas, and when the solvent evaporated, the polymer remained, leaving precisely shaped nanoparticles. To get multiple layers, researchers simply dipped the wafer again and again, forming a new layer each time.

Tuteja said current methods for manufacturing multilayered nanoparticles are more complex than the new approach. Most can only produce spherical particles, and controlling particle size is difficult. He said the team is in the process of developing automated manufacturing methods that could eventually produce larger numbers of particles with greater efficiency. The process could potentially be used to manufacture particles for a variety of applications including computer displays, diagnostic sensors and even microscopic motors.

A paper on the technique, titled “Wettability Engendered Templated Self-Assembly (WETS) for Fabricating Multiphasic Particles,” is published in the Feb. 25 issue of ACS Applied Materials & Interfaces magazine. Research was supported by the National Science Foundation and the Office of Naval Research.