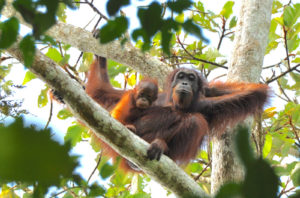 ANN ARBOR—Orangutans have long been viewed as an ecologically sensitive species that can thrive only in pristine forests. But a new synthesis of existing evidence has shown that orangutans can, and do, inhabit in areas impacted by humans, and that may mean only good things for the survival of the species.

Orangutans are a critically endangered, formally protected species. Researchers estimate their current population is less than 1 percent of what it was before humans began encroaching on their habitat 70,000 years ago. Dating back to the Pleistocene, they lived in populations ranging from the islands of Sumatra and Borneo all the way to China and Southeast Asia. But beginning 20,000 years ago, their range shrank to just Sumatra and Borneo.

The review published June 27 in the journal Science Advances combines the fields of paleontology, ecology, conservation, animal behavior, and genetics to examine how orangutan populations have been impacted by humans over the last 100,000 years.

“There’s really quite a long history of humans and orangutans co-existing,” said Andrew Marshall, co-author of the paper and a biological anthropologist at the University of Michigan. “Understanding this not only sheds light on the evolutionary history of orangutans, but also gives us a sense of how to preserve them in the face of current changes in global climate and land use.”

Ignoring interaction between humans and orangutans obscures understanding of orangutans and impacts conservation efforts, said lead author Stephanie Spehar, an associate professor of anthropology at the University of Wisconsin Oshkosh.

“It was often assumed that environmental factors like fruit availability were primarily responsible for most features of modern-day orangutans, such as the fact that they usually live at low densities and have a restricted geographic distribution,” Spehar said.
“However, the orangutan that existed before modern humans arrived in Southeast Asia 70,000 years ago may have been quite different. Our synthesis of fossil, archeological, genetic and behavioral evidence indicates that long-term interactions with humans shaped orangutans in some pretty profound ways.” 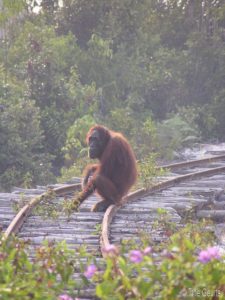 The study shows that orangutans were once far more widespread and abundant, with orangutan teeth among the most common animal remains in deposits in China, Thailand and Vietnam. These orangutans weathered many environmental changes and may even have lived in a wider range of environments than their modern counterparts.

That ability to survive in a range of habitats may persist today. Researchers estimate that over 75 percent of orangutans currently live outside of protected areas—a relief, Marshall says, because the populations of orangutans inside protected forests aren’t large enough to keep the species from going extinct.

“For a long time, we had this view of orangutans as being ecologically very sensitive. We believed they inhabited only pristine, untouched forest and almost never came to the ground,” said Marshall, who also has appointments in the Program in the Environment at U-M and the Department of Ecology and Evolutionary Biology in the College of Literature, Science, and the Arts, and the School for Environment and Sustainability. “As we did more surveys of their populations, it became increasingly clear that they persist in a much wider range of environments, often in close proximity to people and in forests that have been commercially logged.”

Marshall says hunting has the greatest impact on orangutan populations. In reasonably good habitats, a population can support 1 percent loss per year. Two to 3 percent is enough to drive the population to extinction. Because female orangutans have babies only every eight to 10 years, the slowest known reproductive rate of any mammal. Conversely, the researchers found that orangutans are able to live in logged forests and even spend time in oil palm plantations.

The researchers say this calls for a multifaceted approach to orangutan conservation that incorporates human-dominated landscapes but reduces hunting and increases habitat quality and connectivity. Such an approach requires developing sound policies, enforcing existing laws and promoting cooperation among stakeholders.

“The good news is that multi-use landscapes can sustain orangutan populations as long as we manage them well, and a big piece of that is to prevent them from being hunted,” Marshall said. “Our emerging understanding of orangutans’ ecological flexibility and adaptability gives us new opportunities and new hope for conservation; at the same time, it pinpoints what kinds of things really must be avoided if we are to prevent the extinction of orangutans.”