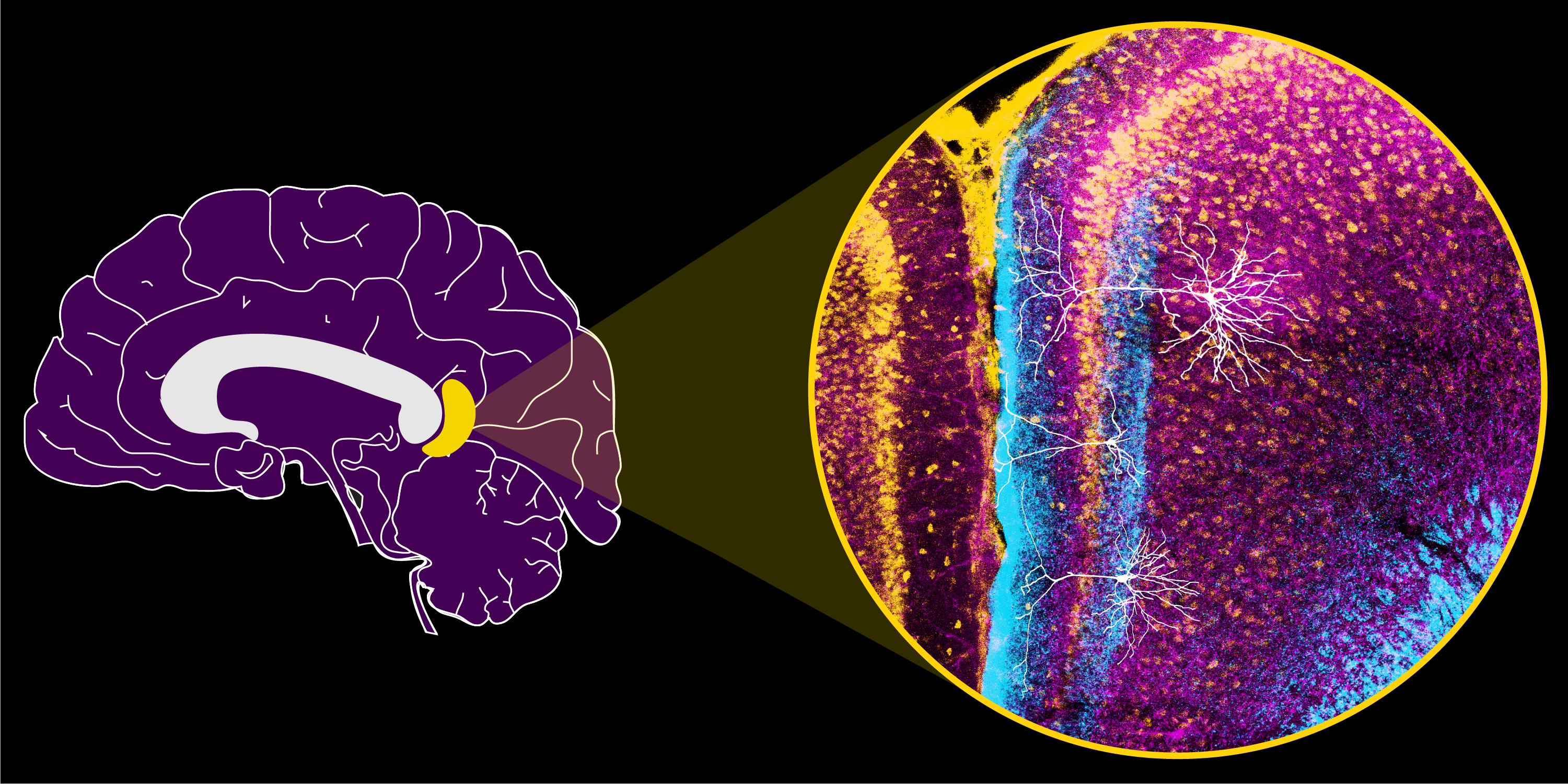 An image of the retrosplenial cortex within the brain, zooming in on the right to show inputs from two other brain regions (blue and purple), along with local retrosplenial neurons (yellow). Three neuronal subtypes (white) are overlaid, revealing a small, unique neuron (middle) ideally positioned to receive and process spatial inputs. Image credit: Brennan, Jedrasiak-Cape, Kailasa et al. (CC BY 4.0)

Finding our way home from work or school is something most of us take for granted. Persons with Alzheimer’s disease, however, can get lost even when moving between such familiar locations and often struggle to find their way home.

Exactly the same inability to get home is also seen in people who do not have Alzheimer’s disease, but instead have suffered damage to a part of their brain called the retrosplenial cortex.

In a newly published study in eLife, University of Michigan researchers have identified a unique brain cell found only in the retrosplenial cortex that starts to explain why this brain region is so important in helping us easily move from place to place. The retrosplenial cortex receives incoming signals from many other brain areas.

Working with mice, the researchers used a technique called optogenetics, where light is used to selectively activate each of these incoming signals one at a time. They found that the directional and spatial signals coming into the retrosplenial cortex communicate only with a unique, small, excitable neuron, while avoiding the nearby standard-issue neurons.

“Our findings suggest these small neurons evolved specifically to support spatial navigation,” said lead author Omar Ahmed, assistant professor of psychology, neuroscience and biomedical engineering. “They are the primary recipient of the head direction and position information reaching the retrosplenial cortex. And the way these head direction signals are sent to these small, unique neurons allows them to calculate not just which way an animal is looking, but also how fast it is turning its head.”

This means that these neurons can take compass signals about which way an animal is looking and turn them into an even more useful gyroscope signal. This gyroscope neuron can then communicate not only head direction, but also the speed at which the head is moving, helping an animal to better orient itself in space.

“Charles Darwin noted the remarkable ability of animals to seamlessly navigate back to their homes. He called it ‘dead reckoning.’ These unique retrosplenial neurons are likely to play an important role in supporting this dead-reckoning ability,” Ahmed said.

Ahmed noted that a better understanding of the retrosplenial cortex and its neurons is likely to help in the search for treatments for Alzheimer’s disease.

“The retrosplenial cortex is one of the first regions to show impaired activity in the early stages of Alzheimer’s disease,” he said. “We are now trying to understand how these neurons are altered in animal models of disease, with the eventual goal of helping to prevent the pronounced spatial disorientation experienced by persons with Alzheimer’s disease.”

The study’s co-authors are all members of Ahmed’s lab: Ellen Brennan, Izabela Jedrasiak-Cape, Sharena Rice and Shyam Sudhakar in the U-M Department of Psychology and Sameer Kailasa in the Department of Mathematics.