MORE DIVERSE PERSPECTIVES
ARE NEEDED TO FIND
THE BEST SOLUTIONS

TO ADDRESS
THESE ISSUES

CAMILA QUINTERO DIAZ
11TH GRADE STUDENT
I really loved protecting the environment. I just didn’t know how I was going to do that.

FEWER THAN 12% OF
ENVRIONMENTAL SCIENCE MAJORS
ARE UNDERREPRESENTED
MINORITIES

AND ONLY 2% ARE BLACK

JENNA MUNSON
OUTREACH SPECIALIST
U-M DEPARTMENT OF EARTH AND ENVIRONMENTAL SCIENCES
A lot of communities where underrepresented minority students come from are ones that are hit hardest by environmental problems.

MARIN CLARK
DEPARTMENT CHAIR, U-M EARTH AND ENVIRONMENTAL SCIENCES
We need a really diverse population of earth scientists in the future with different backgrounds to solve these problems.

AT U-M’S EARTH CAMP
HIGH SCHOOL STUDENTS
FROM ACROSS MICHIGAN
SPEND A WEEK
STUDYING EARTH SCIENCE
[NOTE – the last 3 lines of copy look a bit fuzzy – can you check?]

FOR THREE SUMMERS
IN A ROW

ONE
ACROSS THE
UPPER PENINSULA

AND ONE EXPLORING
THE ROCKY MOUNTAINS

JULIAN SINGLETON
10TH GRADE STUDENT
We learn about how different rock structures are formed right now. We look at how water’s affected by these rocks, what different types of minerals are in the water, how we can prevent our waters from being polluted in the future.

DAN WIITALA
U-M ALUMNUS, HYDRO-GEOLOGIST
So these kids—man, they are engaged—asking lots of good questions, stumping me on my knowledge of rocks, which is a little embarrassing as a professional geologist.
[Should say “alumnus” not “alum”]

JENNA MUNSON
Studies have shown that getting students outdoors is one of the best indicators if they will major in an environmental science degree.

JENNA MUNSON
A lot of our students are also feeling frustrated that they don’t know how to best help their families and communities. And I think that Earth Science can empower them to help their communities.

CAMILA QUINTERO DIAZ
I want to combine environmental science and medicine and figure out how the environment affects one’s health.

NYAH MADDOX
The job that I plan on doing is an environmental consultant—trying to do the right thing to better our environment.

Before the first group of teen campers from the University of Michigan’s Earth Camp began exploring northern Michigan’s waters and dunes, the Upper Peninsula’s mines and Wyoming’s mountains five summers ago, fewer minority students in Michigan were choosing environmental sciences as a major and potential career.

“A lot of communities where underrepresented minority students come from are the ones that are hit hardest by environmental problems, and it’s important to have representatives from those communities to help solve those problems,” said Jenna Munson, outreach specialist for U-M’s Department of Earth and Environmental Sciences and an Earth Camp leader. 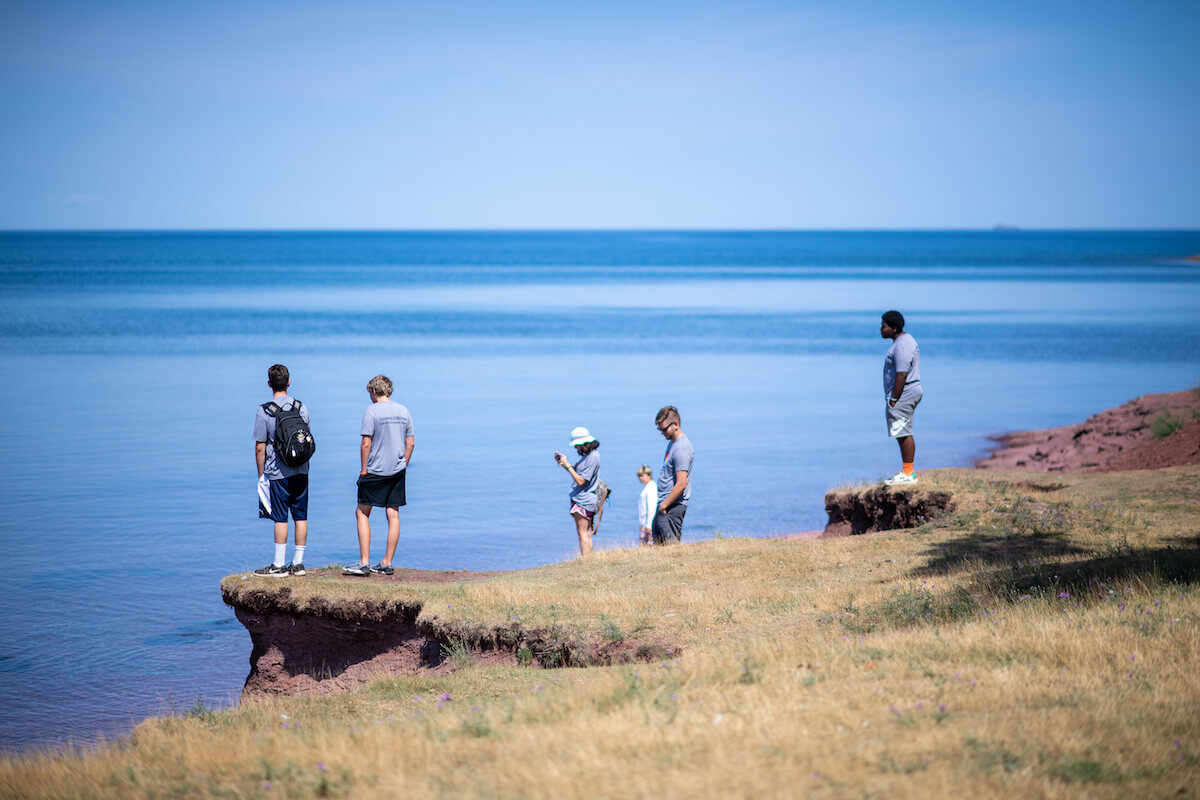 “And companies themselves need representatives from all communities to work on issues that they’re trying to solve, to bring different perspectives to them.”

The lack of representation—and voices to engage people often impacted by environmental problems—can be problematic for communities across the state. It’s the reason Earth Camp took off in 2015. That year, about 20 rising high school sophomores from communities across Michigan embarked on the first of three annual summer field trips and other activities throughout the campers’ high school years. 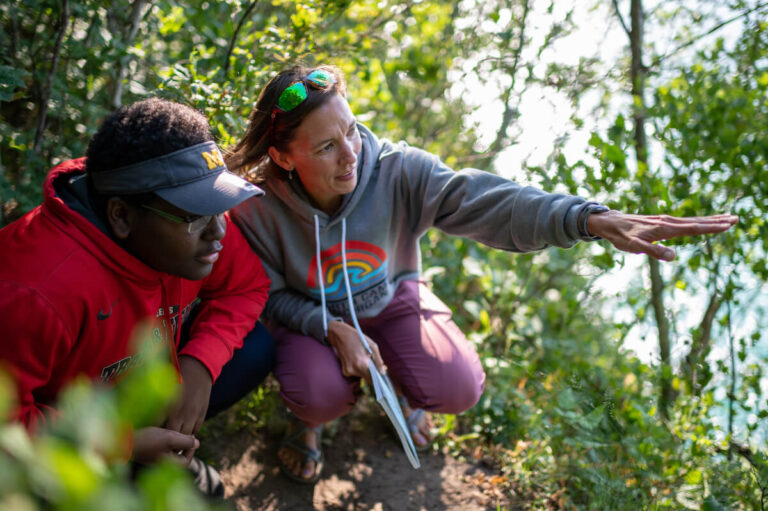 Earth Camp, Munson said, is in large part based on studies that have shown that “getting students outdoors is one of the best indicators if they will major in an environmental science degree.”

So far, Earth Camp is achieving what it set out to do.

About 35 Earth campers, or more than 95% of campers since the camp started in summer 2015, are majoring in earth and environmental science or another field at U-M and other universities. However, a shortage still exists as less than 12% of environmental science majors nationally are minorities and 2% are black, said Munson, citing a National Science Foundation report.

The campers, all top students in their schools in Southfield, Grand Rapids, Detroit, Bay City, Kalamazoo, Ypsilanti and other Michigan cities, arrive with a love and concern for the environment. But most don’t know they can channel that into a major or a career. 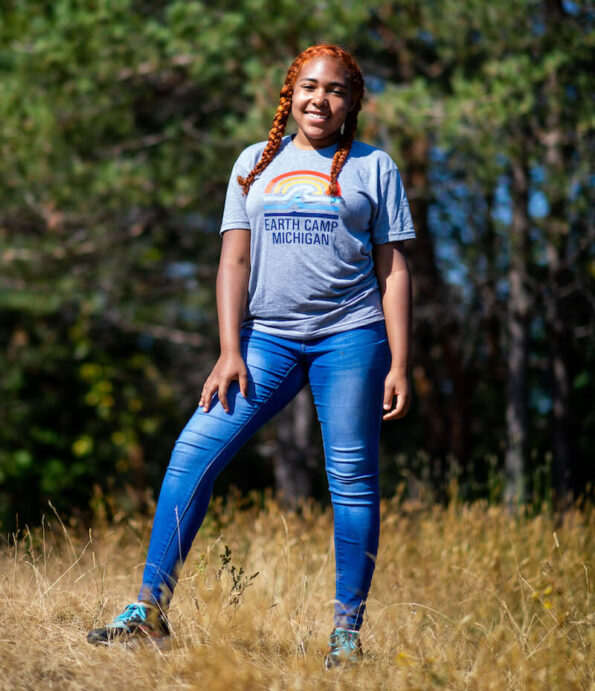 Faculty and students from U-M’s Earth & Environmental Sciences, part of U-M’s College of Literature, Science, and the Arts, teach the campers that and more as they leave their familiar city neighborhoods behind for explorations in places that might seem like another planet.

Before Earth Camp, Nyah Maddox, a high school junior from Southfield, had “never been to areas even near me in Detroit that had an environment like this,” she said during an Earth Camp field trip in the Upper Peninsula in August.

Maddox plans to study environmental science in college after graduating in 2021. She is currently enrolled in a semester-long environmental immersion project at the Conserve School in Wisconsin. She looks forward to becoming an environmental consultant and speaking for her community and her generation.

“I never even knew they offered environmental science in school. I would’ve never…even sought this out until my adult life,” she said. “The best part about it is the fact that they reached out to schools that were in smaller communities.”

Besides summer field experiences, Earth Camp includes time on campus in dorms and labs and with U-M students and professors, learning the challenges and opportunities connected to earth and environmental science. 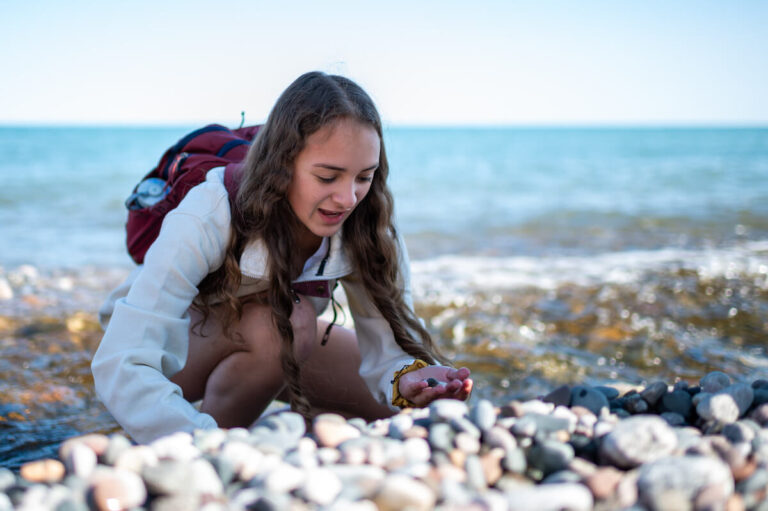 A survey conducted in July and August 2019 by the Kaiser Family Foundation and the Washington Post found that more than seven in 10 teens and young adults say humans are causing climate change, and that it will lead to moderate or a great deal of harm to people of their generation.

“I never even knew they offered environmental sciences in school…the best part about it is the fact that they reached out to schools that were in smaller communities.”
Nyah Maddox, 11th-grade high school student and Earth Camper from Southfield

Camila Quintero Diaz, an 11th grader from Ypsilanti, was sure before Earth Camp that she wanted to do something to protect the environment. She was unsure what. After Earth Camp, she has her sights set on combining medicine with environmental science.

“I really loved protecting the environment; I just didn’t know how I was going to do that,” she said. “There are people out there who care about the environment and care about the natural resources the Earth provides, and it makes you want to go into it. It makes you like, ‘Oh my God, this is awesome! This is why we’re here and it’s important.’ And all the counselors, they’re working together, they’re communicating with everybody and it’s just a great feeling of community.” 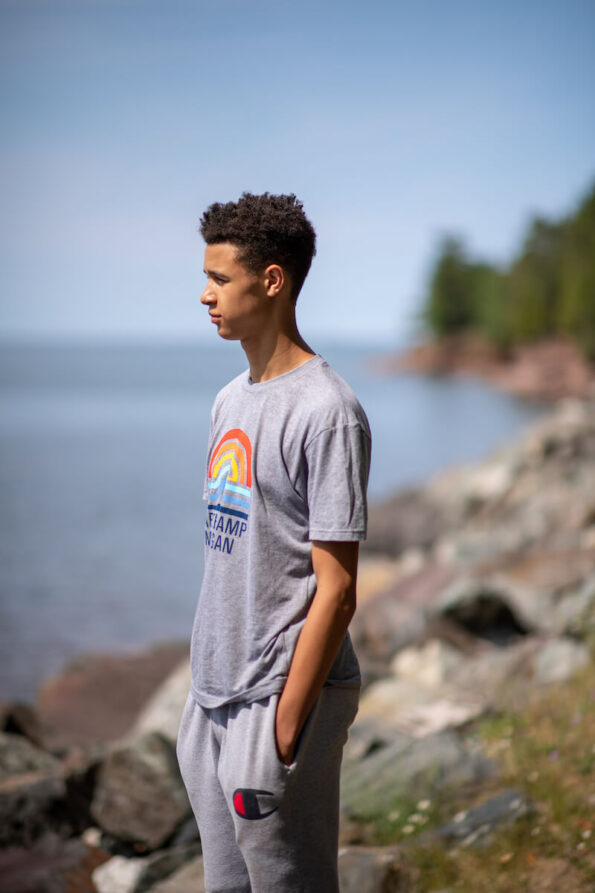 Diaz recalled the moment during a bike ride on a summer field trip when she realized, “if this was all gone, like what would I do? It would be so horrible. And it’s just because of our greediness we don’t want to take care of the Earth and that really irritates me. So I kind of realized like it’s our time to give back to the Earth and I feel like Earth Camp showed me what I could do…”

Julian Singleton, a 10th grader and fellow camper from Ann Arbor, was moved by the discoveries made in the U.P. while studying how rock structures such as iron bands are formed, how the water is affected by rocks and what passes through them and “how we can prevent our waters from being polluted in the future.”

He said the best part of Earth Camp is taking the classroom outdoors and “really understanding what it means.”

“I feel like it puts me ahead of other students in some areas in terms of environmental science and I feel very grateful for the opportunity that U-M has provided for me,” Singleton said.

And at its core, Earth Camp connected him with nature.

“It’s just cool to hold something so essential to the Earth’s creation,” he said.