‘We may be able to watch dark energy turn on’: U-M involved in unprecedented sky survey 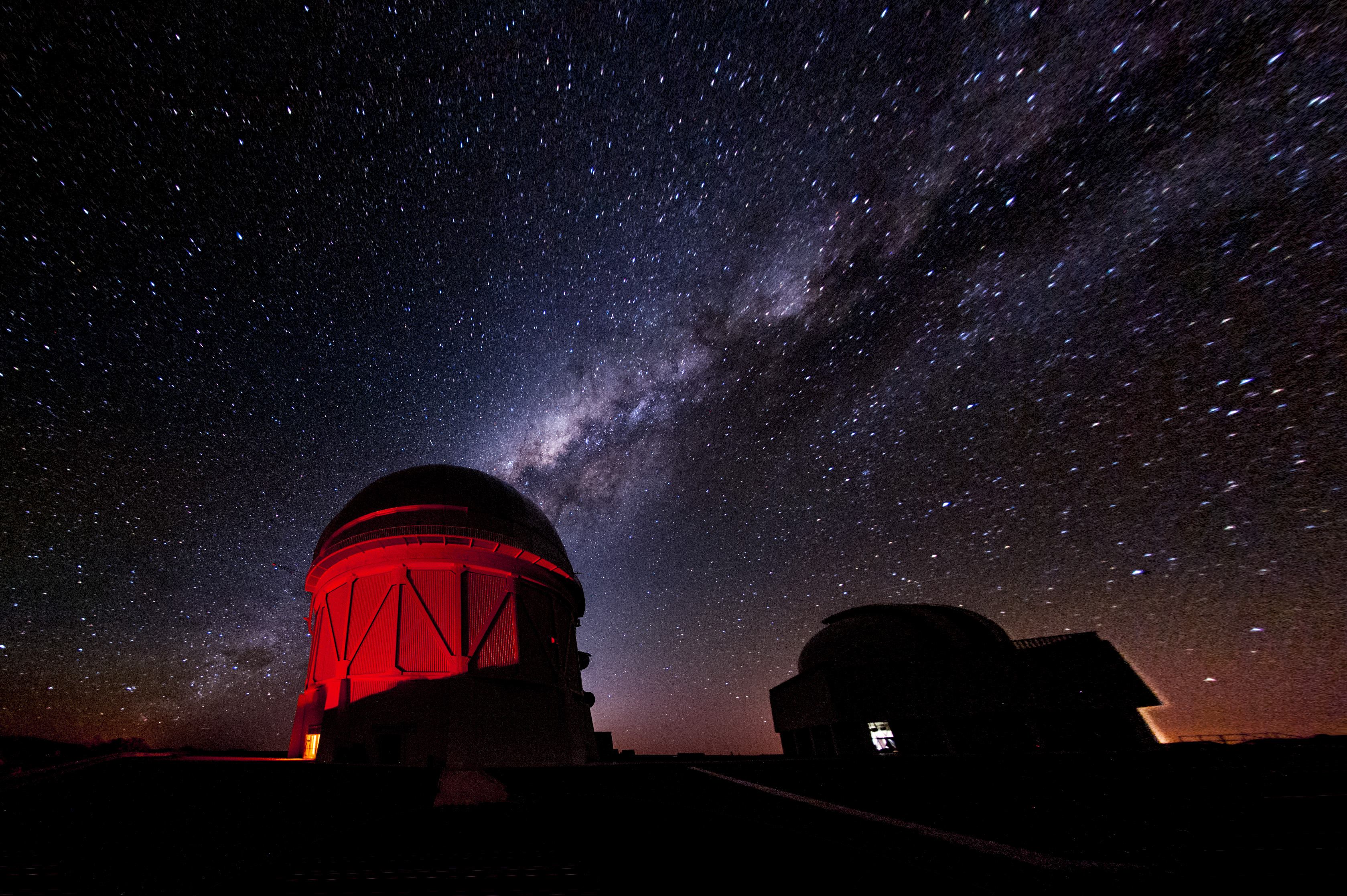 “You can’t see your hands,” said David Gerdes, physics professor at the University of Michigan. “But you can hold them up to the sky and see a hand-shaped hole with no stars in it. It’s really incredible.”

From this site in the Andes over the next five years, an international team will map one-eighth of the sky in unprecedented detail—aiming to make a time lapse of the past 8 billion years of a slice of the universe. Through the Dark Energy Survey, which began Aug. 31, more than 200 researchers from 25 institutions, including U-M, will search for answers to a fundamental question about the cosmos: Why is its expansion speeding up?

The leading theory points to a mysterious force dubbed dark energy. The new survey won’t be able to detect that directly, but the researchers hope to learn insights about its nature by examining the structure of the universe. They’ll image some 100,000 galaxy clusters and 3,000 supernovae, as well as measure how light bends through space and time.

All these objects they’ll observe, and indeed, all visible matter, make up just a small fraction of the universe. The rest—roughly 96 percent—is dark energy and dark matter. Dark matter is an invisible substance that scientists deduce exists because of its effects on visible matter. And dark energy, Gerdes describes, is the smooth energy density of empty space.

“It’s like every cubic centimeter has an energy to it just by virtue of being empty space,” he said.

The concept goes back to Albert Einstein. He called it “the cosmological constant,” but it served a different purpose in his equations.

“Einstein wrote down General Relativity guided by beauty and intuition and agreement with Newton’s laws,” Gerdes said, “and then people started applying it to the universe as a whole. It always described the universe as either expanding or contracting. Einstein said that’s obviously wrong, so he jiggered his equations to make the universe sit still. He put a term in that you can think of as a force to repulse gravity.”

But in the 1920s, Edwin Hubble found that the cosmos was expanding.

“Einstein had his Homer Simpson moment—D’oh!—and called the cosmological constant his greatest blunder,” Gerdes said. “But it turns out it may not have been a blunder.”

Today the uniform property it describes is the leading candidate for dark energy, though there are other hypotheses, including a more spotty or variable force. The Dark Energy Survey aims to help characterize the force.

We will be able to see back in time about 8 billion years, when the universe was much younger.David Gerdes

U-M researchers built key components. Greg Tarle, professor of physics, led the development of the filter changer, a jukebox-like mechanism that switches between colored plates the size of manhole covers. The filters, and a computer program Gerdes devised, give the scientists a quicker way to estimate objects’ distances. That’s an important capability given that the project will catalog an estimated 300 million galaxies.

With physicists and astronomers also involved in the research effort, U-M has one of the largest contingents of any institution. Dragan Huterer, associate professor of physics, will examine how structure grew in the universe across time and space. Tim McKay, professor of physics and astronomy, was involved in the survey leadership through the planning stages. Chris Miller, assistant professor of astronomy, will data mine the galaxy cluster information and build aninventory of them.

Galaxy clusters are the most massive objects that gravity holds together. The catalog will enable researchers to measure their number, distribution and evolution. Such information could illuminate how gravity and dark energy have interacted across the eons.

The survey may discover that gravity is not what Einstein thought. And that would be revolutionary.Gus Evrard

At the vast distances astronomers can observe through large telescopes, they see the universe as it was billions of years ago—with a time delay due to the distance the light from faraway objects has to travel to reach Earth.

“We will be able to see back in time about 8 billion years, when the universe was much younger,” Gerdes said. “We are trying to make a time lapse movie of the last 8 billion years of the universe. We may be able to watch dark energy turn on and see if it’s more consistent with Einstein’s cosmological constant or something else.”

Gus Evrard, professor of physics and astronomy who co-leads the survey’s simulation working group and will analyze galaxy clusters, says the project could upend scientists’ thinking about forces they think they understand.

“The survey may discover that gravity is not what Einstein thought,” Evrard said. “And that would be revolutionary.”

The Dark Energy Survey is a major first step down a long path, says Tarle, the professor who designed the filter changer and will also study the bending of light on cosmic scales.

“At the beginning of the 20th century, elementary particles were discovered and it took a century before we understood them,” Tarle said. “Dark energy is an entirely new thing. It is not made up of particles. It does not dilute with the expansion of the universe. It speaks to the very fabric of empty space. I think it too will take a century to fully understand.”

And striving to understand it, the researchers say, connects humans to the past as well as the future.

“In some ways this survey carries on a prehistoric tradition of people asking questions about the fate of the universe,” Gerdes said. “I love that I can look up when I’m in Chile and it’s the same sky that you would have seen from Earth 10,000 years ago, but we know so much more about it.”

The project is funded by the Department of Energy Office of Science and the National Science Foundation.