She expected those interactions to include lots of poaching. Instead, livestock grazing and the gathering of forest products were among the most common human-related activities her cameras captured, while poaching was actually the rarest.

“The common narrative in conservation, particularly in the tropics and African savannas, is the persistent threat of poaching and bushmeat hunting on wildlife and environmental integrity,” said Harris, an assistant professor in the U-M Department of Ecology and Evolutionary Biology and director of the department’s Applied Wildlife Ecology Lab, which is known as the AWE lab.

“Therefore, we expected to document heavy poaching activity in our camera survey,” she said. “Instead, livestock grazing was the dominant human pressure, and the gathering of forest products—such as wood, grasses and fruit—was the primary human activity that we observed in these protected areas.

“Historically, the impetus for protected areas was exclusively to promote species persistence and to maintain biological processes and unique landscape features. More recently, contributions or benefits from protected areas have extended beyond an environmental perspective to a more inclusive social consideration.” 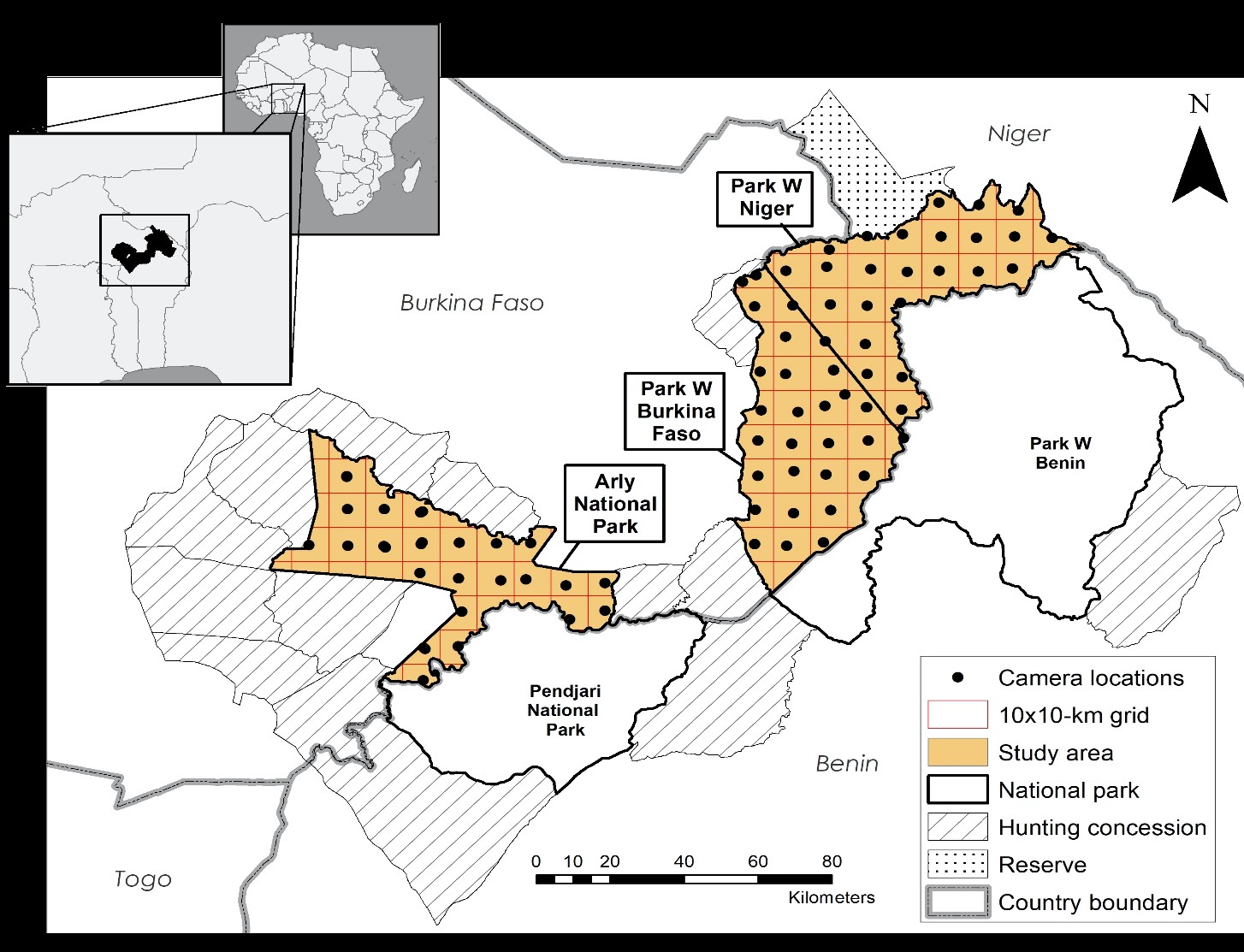 Harris’ study is the first wildlife camera survey in the West African countries of Burkina Faso and Niger. It documented human pressures on mammal communities in three national parks that are part of the largest protected area complex in West Africa, the W-Arly-Pendjari, or WAP.

Harris said the study’s findings highlight the need to incorporate livestock husbandry into management plans for the WAP, which is a UNESCO World Heritage site. One possibility might be the creation of travel corridors for livestock herders to minimize impacts on wild mammals.

“As the first camera study in Burkina Faso and Niger, we documented extensive human activities with social benefits co-occurring within the fragile mammal community of West Africa,” Harris and her colleagues wrote in a paper published online July 29 in the journal Conservation Letters.

“Our findings constitute a crucial step in shifting the WAP complex from the singular and arguably outdated mandate of nature conservation to a more dynamic coupled human-natural ecosystem approach of sustainable, integrated management.”

West Africa is a region high in both biodiversity and environmental challenges. Deforestation is rapidly reducing wildlife habitat throughout the region, and urban development is expected to exacerbate the problem in the future. Furthermore, climate projections for the region predict contractions in the distribution of savanna and the loss of tree cover in coastal areas.

The U-M-led camera survey was conducted between 2016 and 2018 in three national parks established in 1954: Arly National Park, Park W-Burkina Faso and Park W-Niger. Harris’ research team included government and university partners in Burkina Faso and Niger, as well as early career professionals from those countries and U-M students.

To assess human pressure on, and interactions with, mammal communities in the parks, the researchers strapped motion-triggered digital cameras to the trunks of trees in the parks, with a total of 119 camera stations deployed across the study.

The study yielded more than a million images, making it the largest non-invasive wildlife study for the region. The images included pictures of 33 wild mammal species, as well as shots of people and their domesticated animals: cattle, goats, donkeys and dogs.

Hooved animals (ungulates) represented 72-85% of the wild mammal species across the surveys, while carnivores represented 7-17%. The cheetah was the rarest species photographed, and seven other animals of conservation concern also triggered the camera shutters, including leopards, hippos, red-fronted gazelles and critically endangered West African lions.

Harris and her colleagues defined human pressure on wild mammal behavior as either direct or indirect. People appeared in more than 3,300 of the photos and were placed into one of four categories of direct human pressure based on their observed activities: gathering, herding, poaching and transiting/recreation. People carrying harvested animals, fishing nets, guns or other weapons were categorized as poachers.

Photos showing cattle, goats, donkeys or dogs—but without any people in the frame—were categorized as indirect evidence of human pressure on wild mammals. 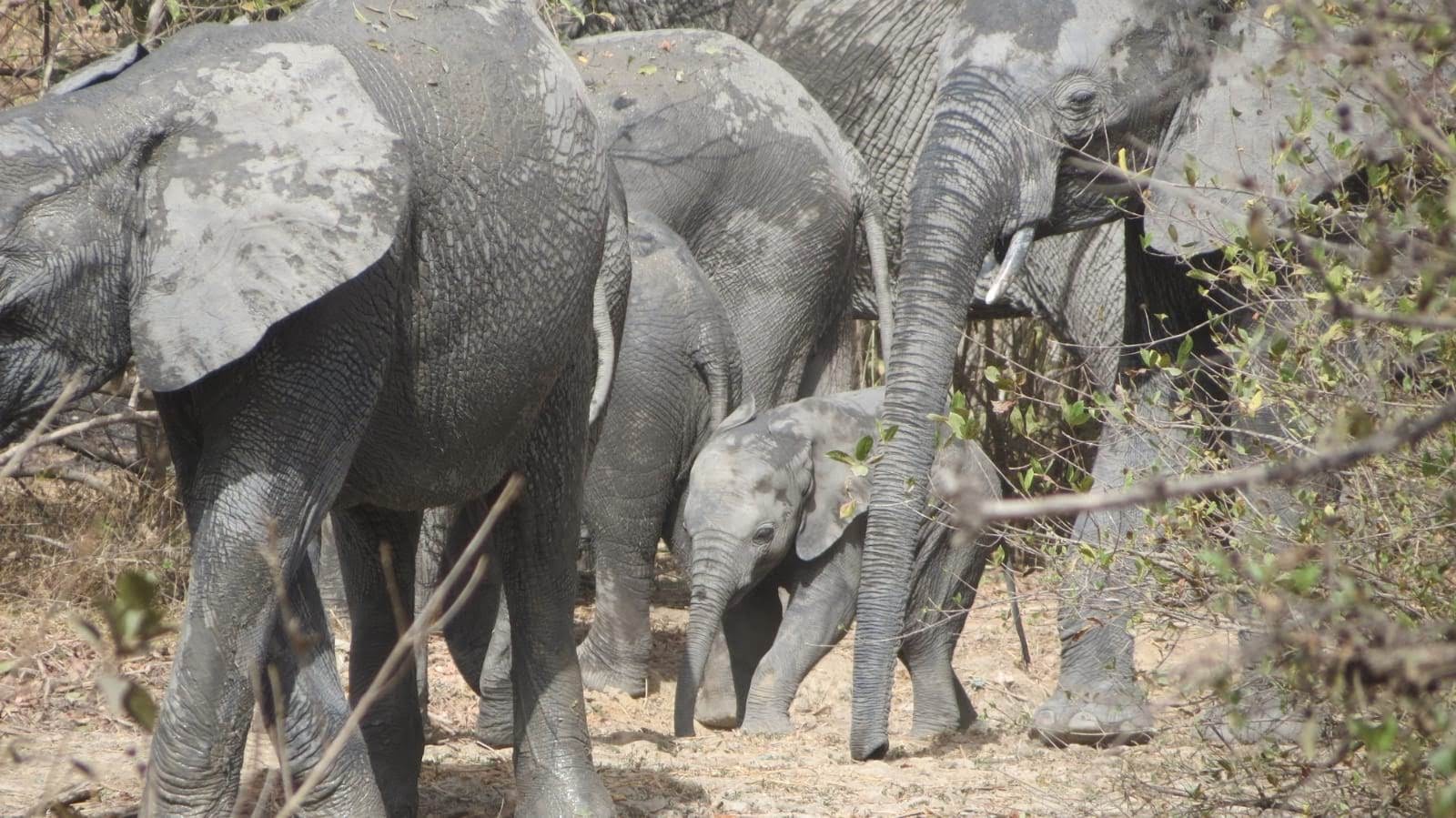 To gauge the impact of direct and indirect human activity on wild mammal behavior, Harris and her colleagues compared the number of wild mammal photos captured in places where people were known to be present to the “triggering activity” in places without any people.

Overall, they found reduced activity of wild mammals in places where people or their domesticated animals were present.

Harris and her colleagues had expected that carnivores would be most sensitive to human pressure and most likely to change their behavior in places where people were present. Surprisingly, ungulates were the most sensitive group, a result the scientists attribute to high levels of cattle grazing throughout the WAP complex and the resulting competition for food between livestock and wild ungulates.

Interestingly, human pressures did not impact the diversity (i.e., the number of species) or the composition (i.e., the type of species) of mammal communities in the WAP complex.

The other authors of the Conservation Letters paper are Kirby Mills, a master’s graduate of the U-M School for Environment and Sustainability and an incoming doctoral student in the Department of Ecology and Evolutionary Biology; Yahou Harissou of Parc W-Niger, Niger; Emmanuel Hema of the Université de Dédougou, Burkina Faso; Isaac Gnoumou of the Ministère de l’Environnement, Burkina Faso; Jenna VanZoeren, an undergraduate alumna of U-M’s Applied Wildlife Ecology Lab; Yayé Abdel-Nasser of Parc W-Niger, Niger, who is sponsored by the AWE lab as a master’s student at the University of Dakar, Senegal; and Benoit Doamba of the Ministère de l’Environnement, Burkina Faso.

Financial support for the project was provided by the U-M African Studies Center-STEM initiative, the U-M Office of Research and the Detroit Zoo.