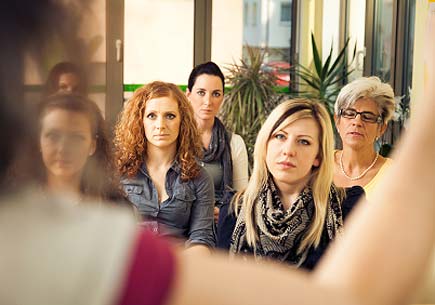 ANN ARBOR—Working women who engage in feminist activism report more experiences of gender harassment on the job, regardless of whether or not they identify themselves as feminists, a new University of Michigan study indicates.

“A woman who personally adopts the feminist label may not ‘out’ herself as such to others,” said Kathryn Holland, the study’s lead author and a graduate student in women’s studies and psychology. “Women openly engaging in activism for women’s rights may pose a more obvious threat to the existing gender hierarchy—a hierarchy that grants more power to men than women.”

U-M researchers examined how feminism relates to women’s experiences of unwanted sexual and sexist conduct in the workplace. They assessed two indicators of feminism: self-identification as “feminist” and engaging in feminist activism.

Holland and her co-author Lilia Cortina, an associate professor of psychology and women’s studies, analyzed data from 424 women about their work experience. More than half—219 women, or 53 percent—identified themselves as feminist. About 40 percent—or 167 women—engaged in some form of feminist activism, such as signing a petition or giving money to a cause. Among those who indicated they were feminists, 78 percent reported they did not engage in any form of activism while the remaining 22 percent did.

About 79 percent (335 women) described at least one sexual harassing work experience during the prior year.

While feminists reported less gender harassment than women who did not identify as feminist, feminist activists experienced more harassment compared to non-activist women. Holland says a possible explanation is that feminist activism is an observable behavior (which could trigger harassment), but feminist identity is not.

In addition, perhaps other negative work experiences (such as gender discrimination or poor family-friendly policies) motivate women to engage in feminist activism and leading them to feel dissatisfied with their jobs.

“Sexual harassment can be devastating to women, both personally and professionally. However, we found evidence that engagement in feminist activism may help protect against or remediate some negative occupational outcomes,” Holland said.

The intersection of feminism and harassment presents working women with a catch-22, she says.

“On one hand, behavioral displays of feminism could prompt sexist and sexualized hostilities from co-workers,” Holland said. “On the other hand, not engaging with feminism could increase the chance that women will suffer professionally if harassed, not to mention the fact that avoiding feminist activism diverts energy from a cause committed to advancing women in employment.”