Cambrien Beaver, like most fourth graders, thought public speaking a bit terrifying. That is, until she was on stage last winter presenting her team’s plan to make and sell rubber boat propeller covers to protect manatees swimming too close. 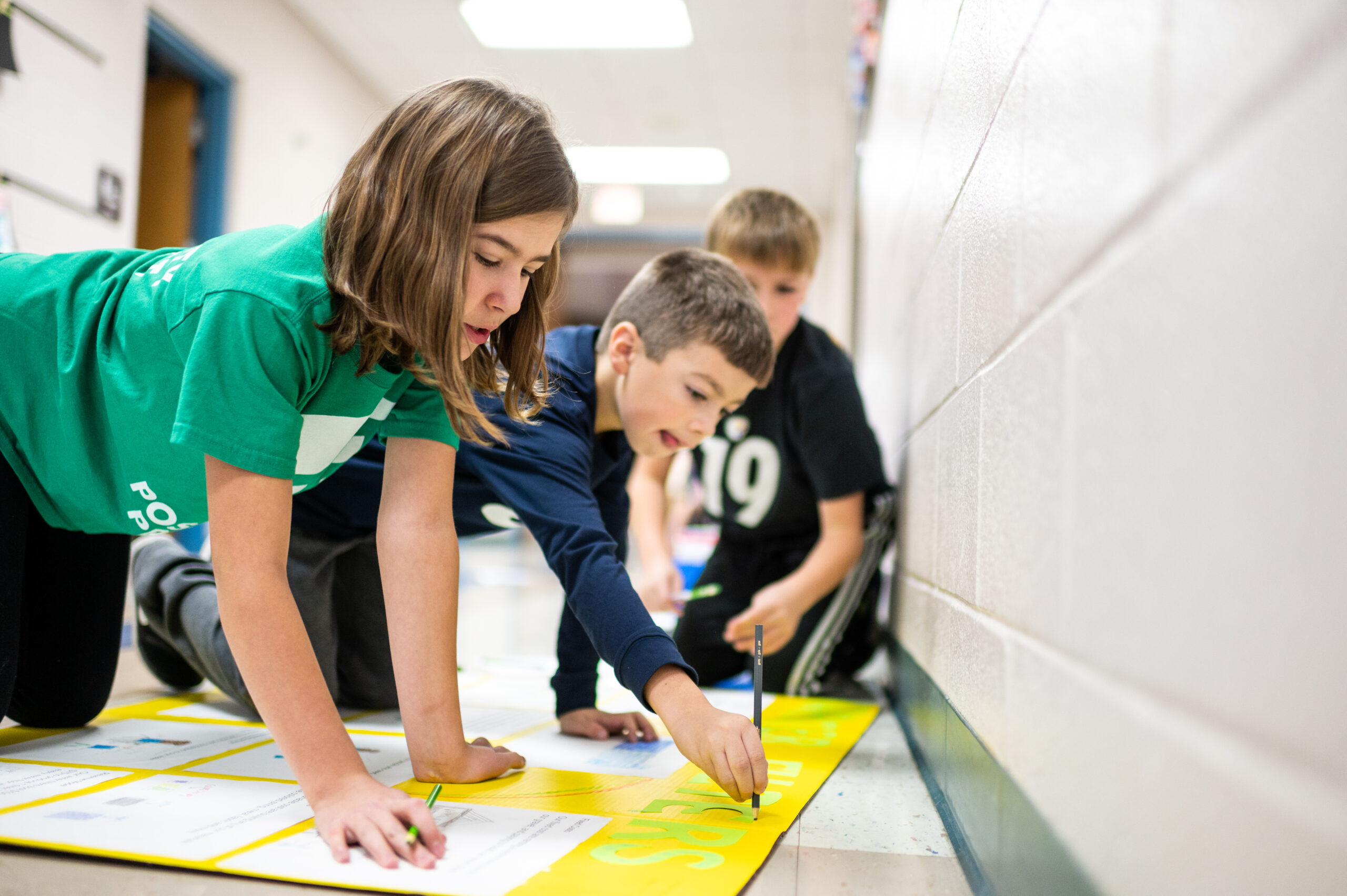 With 400 other students, teachers and parents looking on at the University of Michigan-Flint campus, Beaver gulped in three deep breaths and bravely shared her team’s plan as part of a Shark Tank-style pitch competition called Young Sharks.

“We found out that manatees are becoming extinct and 25% to 30% of their deaths are caused by boat propellers,” said the Mason Elementary School student from Grand Blanc, who along with her three teammates learned about manatees from reading a newspaper article. “To build the product, we decided we would have to do babysitting and mow lawns and other stuff.” 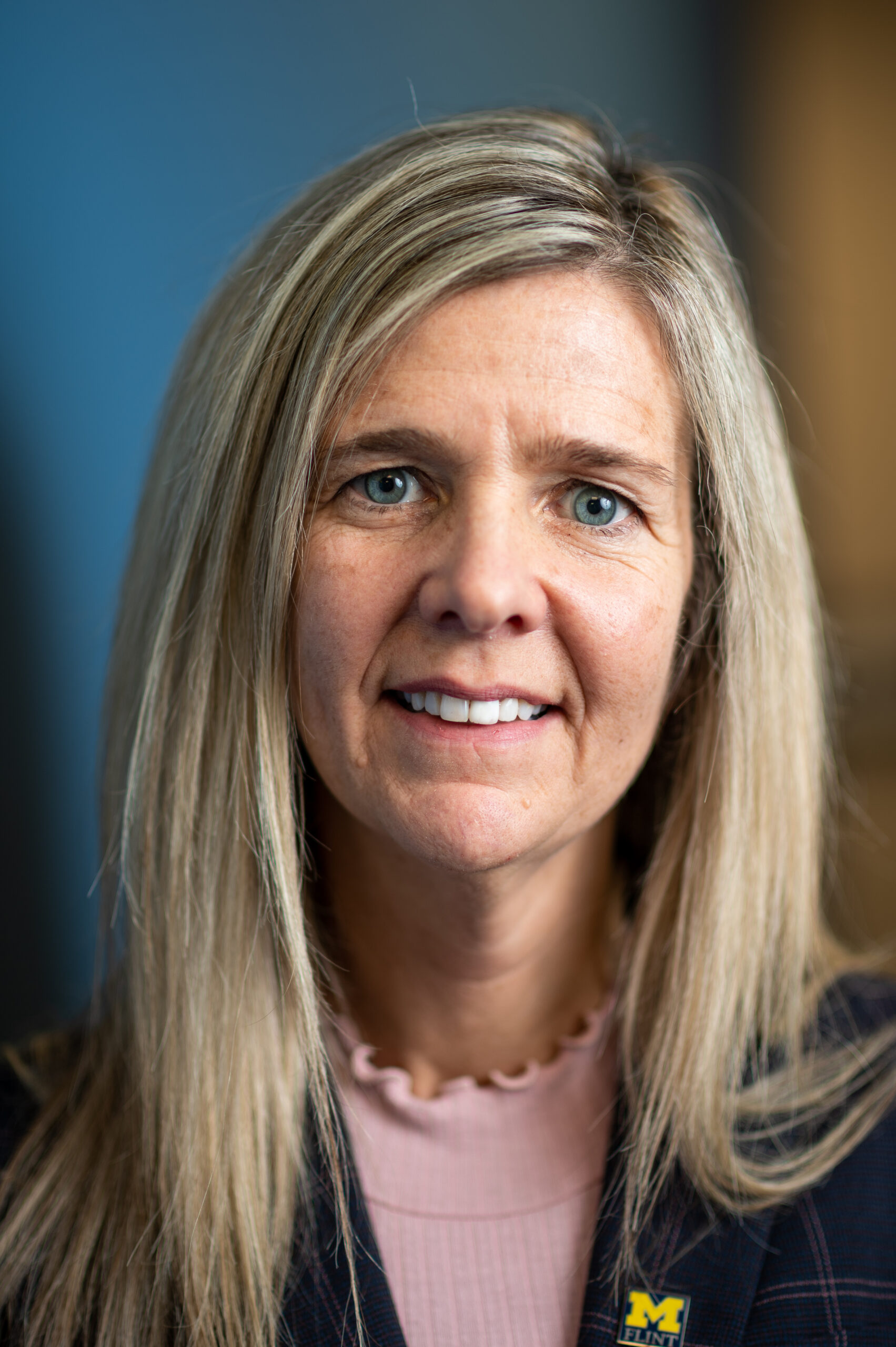 While similar business pitch competitions are routine for college and even some high school students, Young Sharks is one of few programs that exposes elementary school-aged children to startups and all the possibilities that can spring from their curiosity and creativity, said Paula Nas, director of economic development at UM-Flint. It can also help prepare them for a working world that could change significantly over the next decade or two.

“The curriculum fills a gap in what teachers need. It also instills the entrepreneurial mindset in kids by teaching them that it’s good to work as a team, take risks and pivot,” Nas said. “My goal is to get this in every fourth grade classroom in Michigan.”

While the program has operated virtually since the spring with precautions around the coronavirus, the curricula for Junior Sharks has been developed for middle school students. It was initially offered in Genesee County schools after a pilot that started last winter and has since expanded to Oakland County schools, Nas said.

The students spent last fall in class working through the Young Sharks curriculum, which was developed by Nas and Terry Groves, a former public school curriculum developer who has also taught classes within the university’s economics department.

The curriculum aligns with state content standards in social studies, integrating with science, math, reading, language arts and 21st-century career skills. Students are guided from the ideation stage of a business to launch, culminating in the business pitch presentation.
Teachers are provided with the complete set of lesson plans, student worksheets and activities, display boards and support from the UM-Flint facilitators. Christina Ostrander, a teacher at Mason Elementary School, said the program integrated seamlessly into what they were already doing in the classroom. 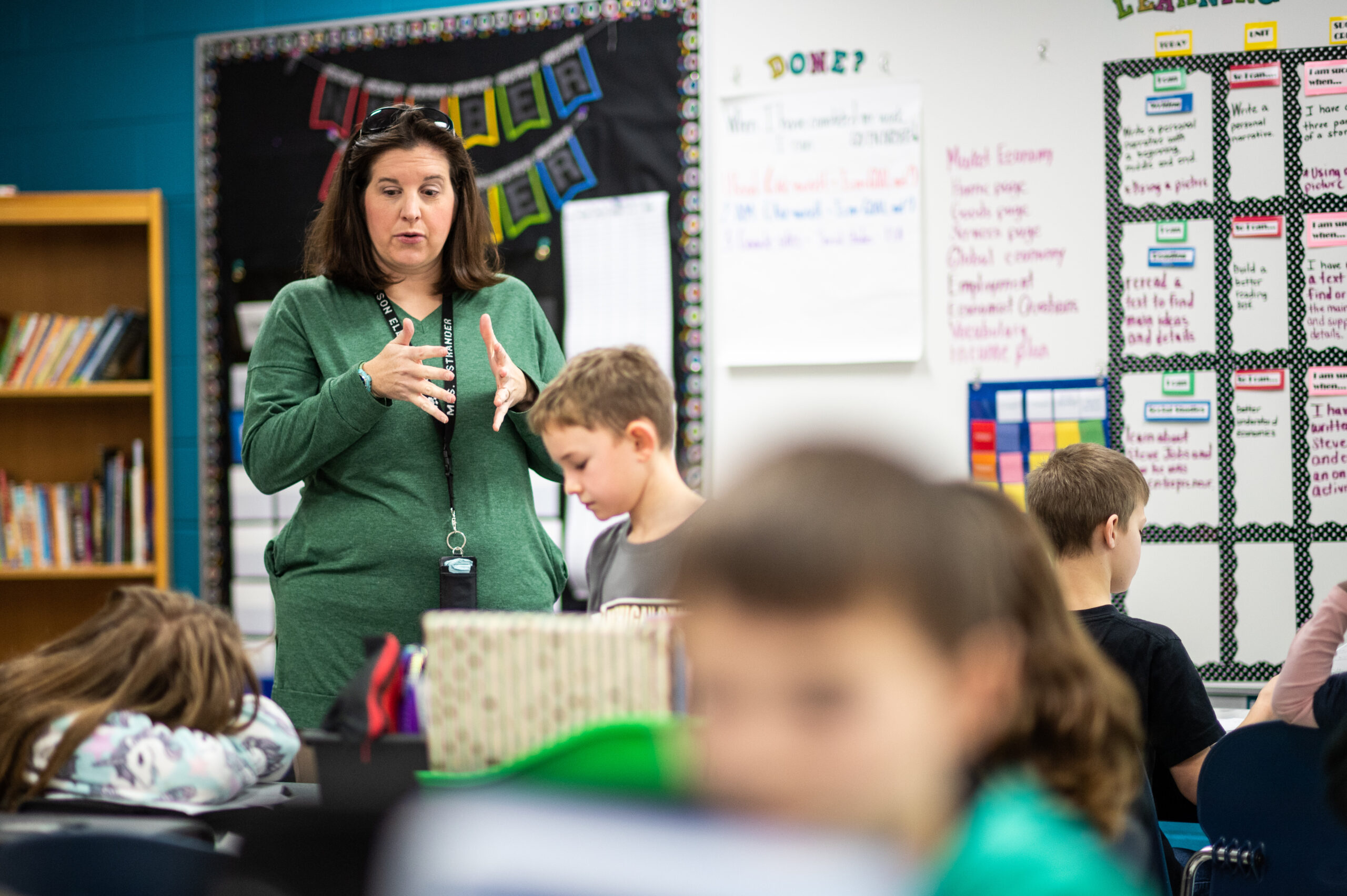 Christina Ostrander, a teacher at Mason Elementary School, said the program integrated seamlessly into what they were already doing in the classroom. She participated in the pilot last winter and the program has operated virtually since spring. Image credit: Eric Bronson / Michigan Photography

“The hands-on piece of the curriculum is so important because those building blocks of economics are not easy to understand,” she said. “When you give the kids an opportunity to work with their hands and their minds, you get some pretty amazing projects.”

Student Mason Nyholm worked on a team that wanted to create a water filter to help people around the world get access to clean water. He said he liked working on the Young Sharks project a lot and it taught him the value of teamwork.

“If you help each other, things will get done super fast because that’s basically putting four minds together, which is even smarter than just one,” he said. “And it builds friendships.”

The pilot, which culminated in the pitch competition in December, also included students from Freeman Elementary in Flint, and Brendel Elementary, Myers Elementary and Perry Innovation Center, all in Grand Blanc. Students formed teams and generated business ideas in four categories: inventions, services, performing arts and visual arts. Each team of student businesses created a business pitch presentation and display board.

LeTasha Peebles, one of the judges for the pitch competition and a grant manager for entrepreneurship and innovation at the Michigan Economic Development Corp., said the competition was “fully charged with hungry entrepreneurs in the making.”

“I don’t know of any other curriculum in the state that is preparing children to compete at such a high level,” Peebles said. “To hear a child that age articulate their profit margins and market strategy before a packed room of their peers with ease and understanding means this program got it right.”

So far, school districts in Genesee and Shiawassee counties and Lansing have asked for the curriculum, said David Merot, senior project manager for UM-Flint Office of Economic Development.

“They are the future,” he said. “They are the next generation that is going to take action or take risks to actually change things and be adaptable to the future of work.” 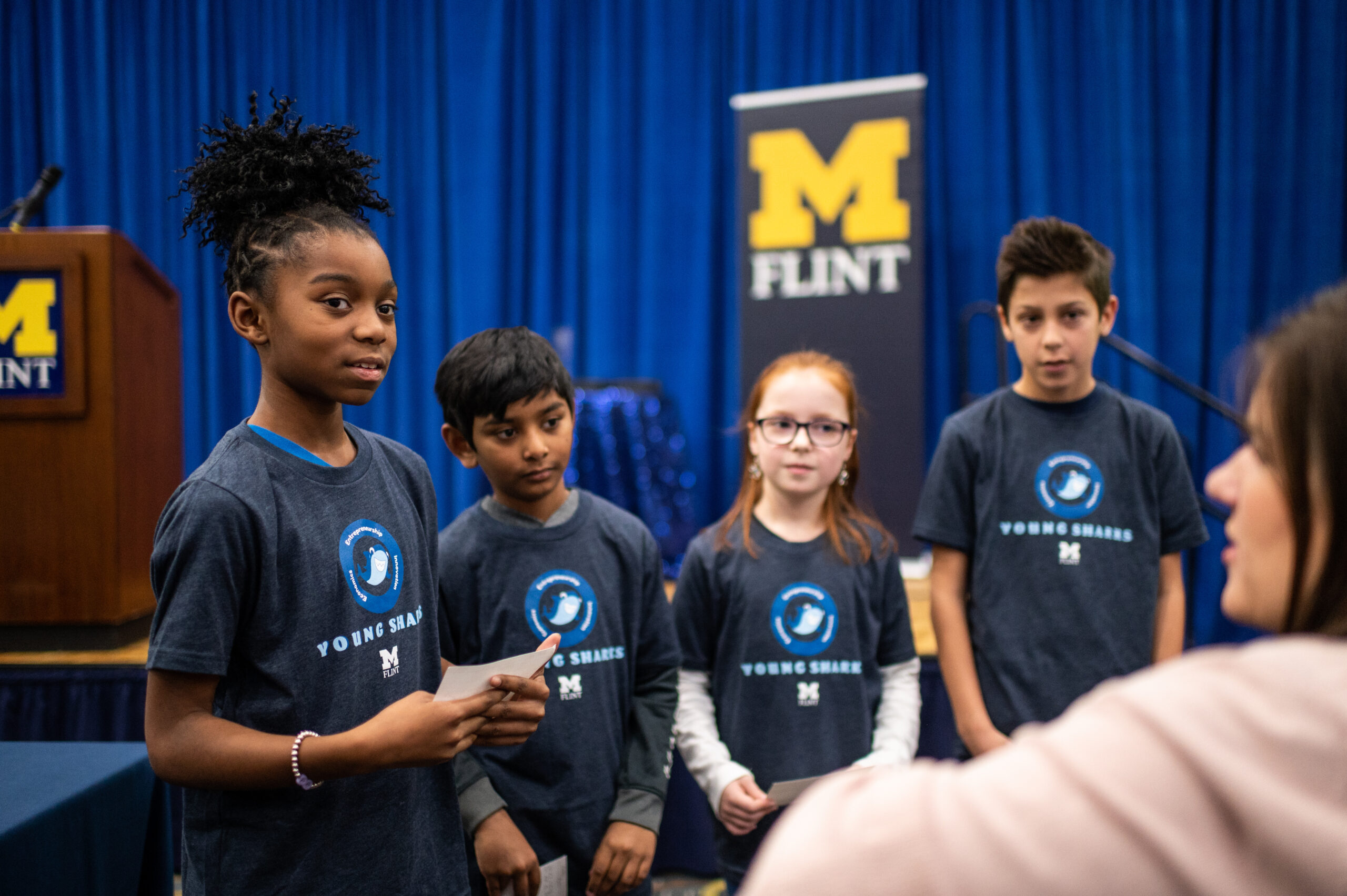 Students from Mason Elementary School of Grand Blanc Community Schools discuss their presentation strategy with their teacher during the presentation on 12/3/2019 at Riverfront Banquet Center on the UM-Flint campus. Image credit: Eric Bronson / Michigan Photography

The program, funded by the C.S. Mott Foundation, grew out of business workshops that his office has provided at the Innovation Incubator on campus for the past 14 years. The program went on the road four years ago with a series on business essentials and has trained hundreds of Flint-area teens and adults.
Young Sharks helps students learn to be creative thinkers and problem solvers and develop a clear understanding of the steps to becoming an entrepreneur. Learning these skills at a young age allows the students to develop a foundation for critical thinking and adapting to new learning opportunities with greater confidence.
Beaver, whose team didn’t place in the top three, said she might consider a photography business next time.
Her takeaway from the Young Sharks experience?
“It will help me knowing that other people will support me no matter what—even if it doesn’t work out,” she said.