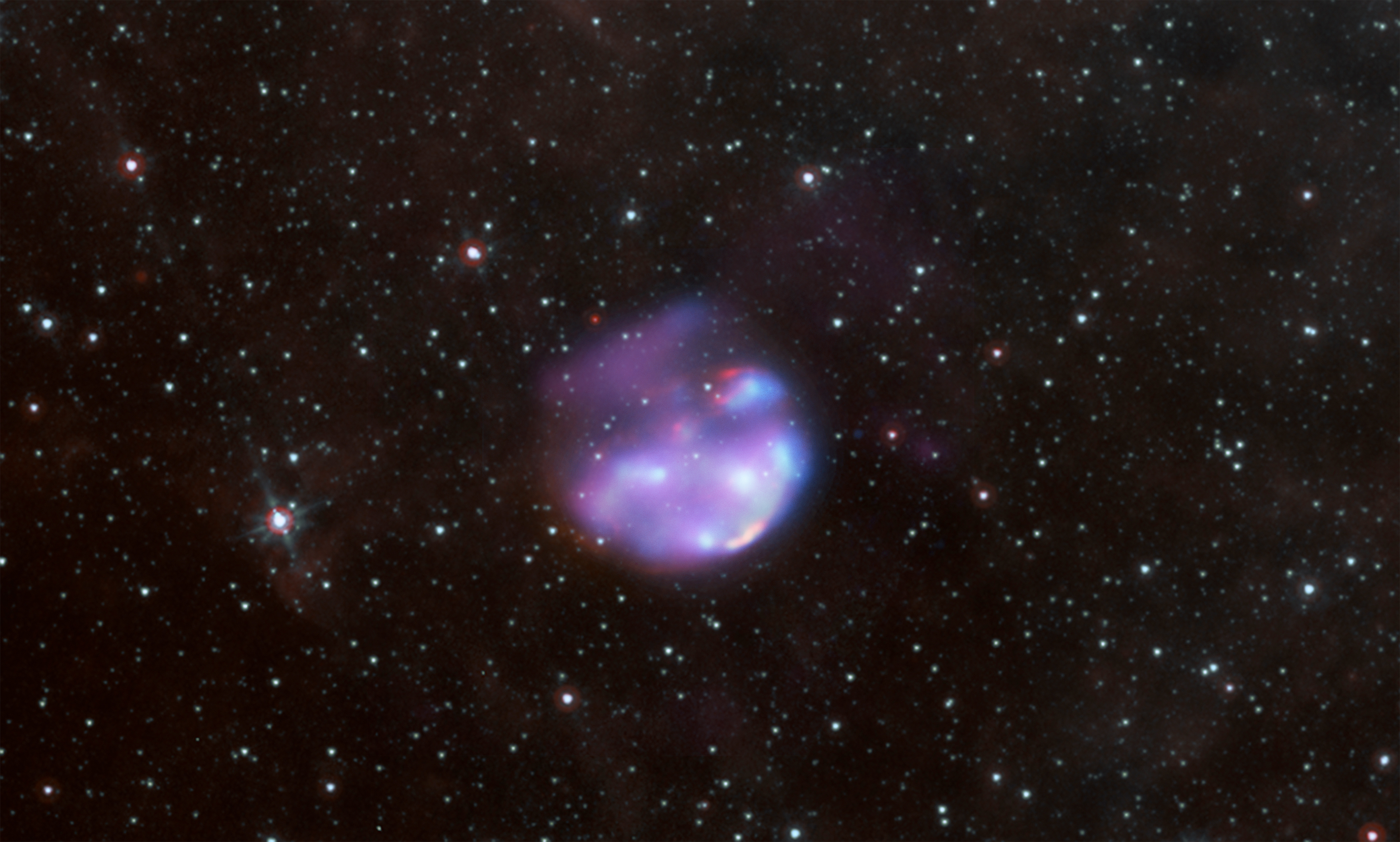 A composite image of the remains of a young supernova, approximately 26,000 light years away in the constellation Centaurus. Emissions are represented in blue from X-rays, red and cyan from infrared and purple from radio. The remnant, about 150 light years across, is a hot cloud of iron, neon, silicon and sulfur, among other elements. Credit: X-ray: NASA/CXC/Univ. of Michigan/M. Reynolds et al; Infrared: NASA/JPL-Caltech; Radio: CSIRO/ATNF/ATCAANN ARBOR—The remnants of a supernova—among the youngest ever found in the Milky Way—have been discovered by a University of Michigan astronomer.

The finding will enable astronomers to learn about the nature of the original star and the details of its demise. The object is named G306.3–0.9, after the coordinates of its sky position near the southern border of the constellation Centaurus.

“This discovery is very exciting, and our observations have constrained the supernova remnant to be among the 20 youngest known in the galaxy, at approximately 2,500 years old,” said lead author Mark Reynolds, a research fellow in astronomy in the U-M College of Literature, Science, and the Arts. “Supernovae play a critical role in the life cycle of the universe, enriching the interstellar medium with metals and affecting the process of star formation in galaxies.”

Reynolds made the discovery while surveying the plane of the galaxy with the NASA/Swift satellite, looking for new X-ray sources.

Supernova remnants emit energy across the electromagnetic spectrum, from radio to gamma rays, and important clues can be found in each energy band. X-ray observations help reveal the motion of the expanding debris, its chemical content, and how it interacts with the interstellar environment. But supernova remnants fade in X-ray light after 10,000 years. Indeed, only half of those known in the Milky Way galaxy have been detected in X-rays at all.

Astronomers estimate that a supernova explosion occurs once or twice a century in the Milky Way. The expanding blast wave and hot stellar debris slowly dissipates over hundreds of thousands of years, eventually mixing with and becoming indistinguishable from interstellar gas.

To further investigate the object, the team followed up with an 83-minute exposure using NASA’s Chandra X-ray Observatory and additional radio observations using the Australia Telescope Compact Array, located near the town of Narrabri in New South Wales. 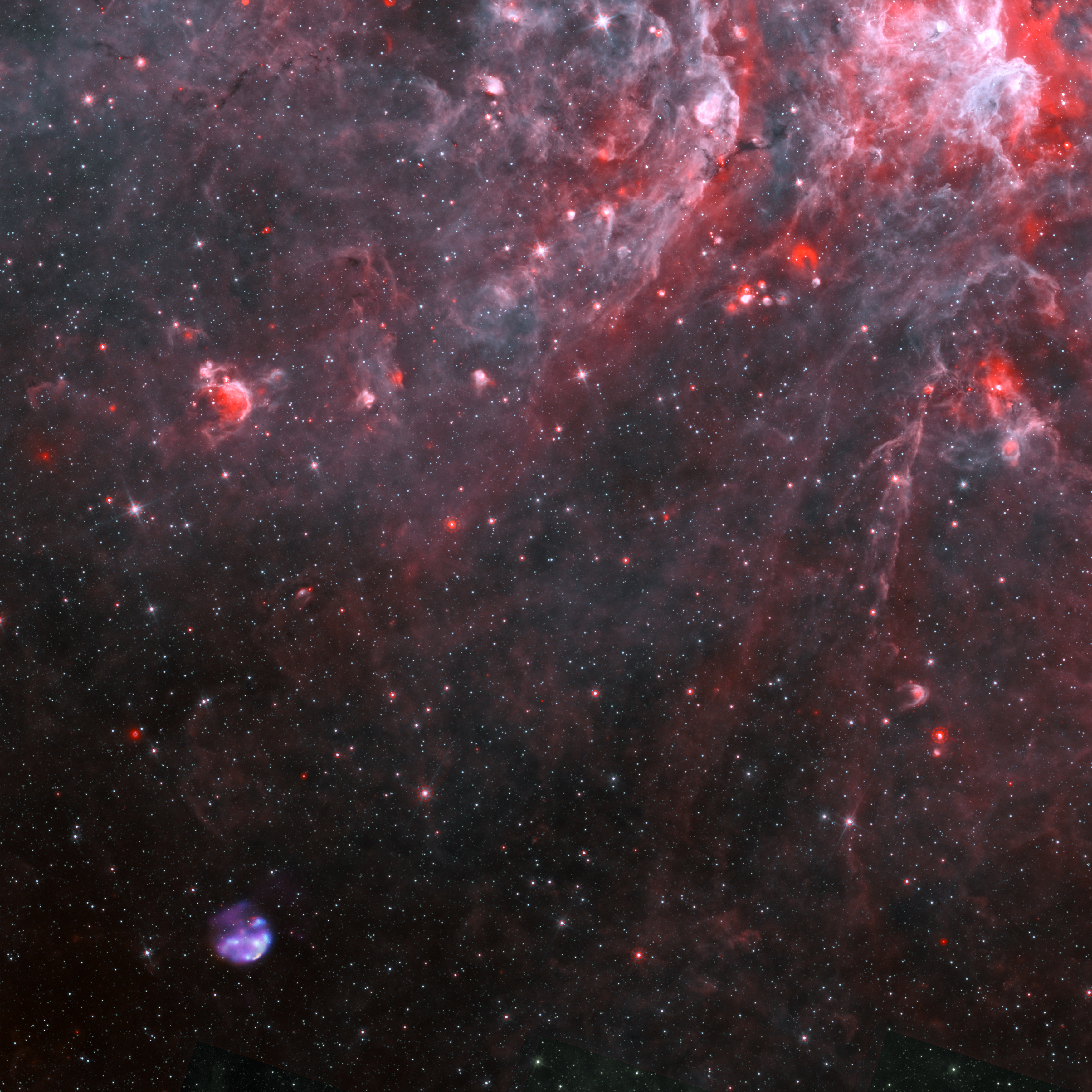 A wide view of a young supernova remnant in context with a star-forming region in the constellation Centaurus. The pink cloud of dust and gas is about 13,000 light years away, whereas the supernova remnant, in the lower left, is twice as far. Credit: X-ray: NASA/CXC/Univ. of Michigan/M. Reynolds et al; Infrared: NASA/JPL-Caltech; Radio: CSIRO/ATNF/ATCAThe scientists determined that the explosion’s shock wave is racing through space at about 1.5 million miles per hour. The Chandra observations reveal the presence of iron, neon, silicon and sulfur at temperatures hotter than 50 million degrees Fahrenheit, a reminder not only of the energies involved but of the role supernovae play in seeding the galaxy with heavy elements produced in the hearts of massive stars.

“We don’t yet have enough information to determine what type of supernova this was and, therefore, what type of star exploded, but we’re planning deeper observations to improve our picture,” said co-author Jamie Kennea, also a researcher at the Swift Mission Operations Center. “We see no compelling evidence that the explosion formed a neutron star, and this is something we hope can be determined one way or the other by future work.”

Reynolds is lead scientist for the Swift Galactic Plane Survey. The principal investigator is Jon Miller, associate professor of astronomy at U-M. The aim of the project is to simultaneously image a two-degree-wide strip along the Milky Way’s central plane at X-ray and ultraviolet energies. Imaging started in 2011 and is expected to be complete this summer.

The paper, “G306.3-0.9: A Newly Discovered Young Galactic Supernova Remnant,” appears online in the Astrophysical Journal and will be published in a forthcoming print edition. The work is funded by NASA.