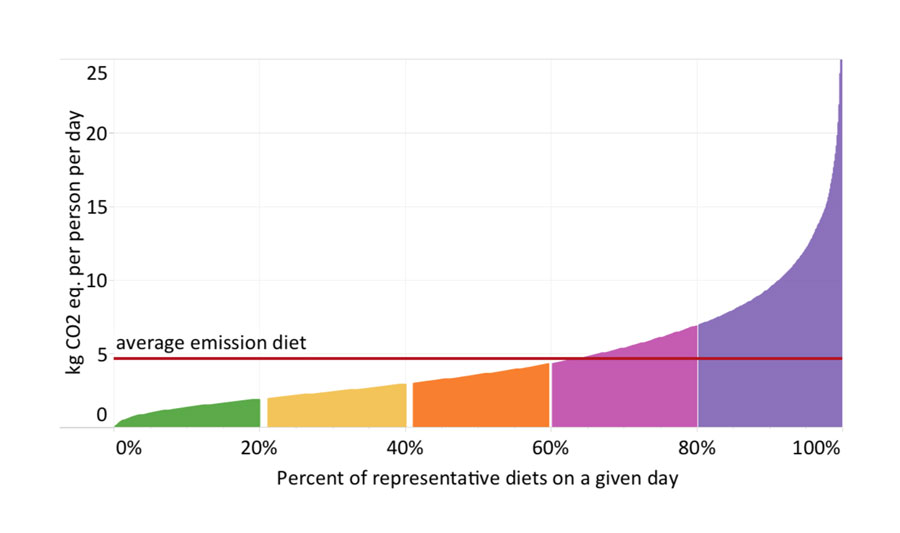 A University of Michigan and Tulane University study showed that the 20 percent of U.S. diets with the highest carbon footprint accounted for 46 percent of total diet-related greenhouse gas emissions. Image credit: Martin Heller

A University of Michigan and Tulane University study showed that the 20 percent of U.S. diets with the highest carbon footprint accounted for 46 percent of total diet-related greenhouse gas emissions. Image credit: Martin Heller

ANN ARBOR—On any given day, 20 percent of Americans account for nearly half of U.S. diet-related greenhouse gas emissions, and high levels of beef consumption are largely responsible, according to a new study from researchers at the University of Michigan and Tulane University.

To estimate the impact of U.S. dietary choices on greenhouse gas emissions, the researchers built a database that assessed the environmental impacts involved in producing more than 300 types of foods. Then they linked the database to the findings of a nationally representative, one-day dietary recall survey involving more than 16,000 American adults.

They ranked the diets by their associated greenhouse gas emissions, from lowest to highest, then divided them into five equal groups, or quintiles. The researchers found that the 20 percent of U.S. diets with the highest carbon footprint accounted for 46 percent of total diet-related greenhouse emissions.

The highest-impact group was responsible for about eight times more emissions than the lowest quintile of diets. And beef consumption accounted for 72 percent of the emissions difference between the highest and lowest groups, according to the study.

“A big take home message for me is the fact that high-impact diets are such a large part of the overall contribution to food-related greenhouse gases,” said U-M researcher Martin Heller, first author of a paper published March 20 in the journal Environmental Research Letters.

The study estimated the greenhouse gas emissions associated with food production only. Emissions related to the processing, packaging, distribution, refrigeration and cooking of those foods were not part of the study but would likely increase total emissions by 30 percent or more, Heller said.

“Reducing the impact of our diets—by eating fewer calories and less animal-based foods—could achieve significant reductions in greenhouse gas emissions in the United States. It’s climate action that is accessible to everyone, because we all decide on a daily basis what we eat,” said Heller, a researcher at the U-M Center for Sustainable Systems in the School for Environment and Sustainability.

If Americans in the highest-impact group shifted their diets to align with the U.S. average—by consuming fewer overall calories and relying less on meat—the one-day greenhouse-gas emissions reduction would be equivalent to eliminating 661 million passenger-vehicle miles, according to the researchers.

That hypothetical diet shift, if implemented every day of the year and accompanied by equivalent shifts in domestic food production, would achieve nearly 10 percent of the emissions reductions needed for the United States to meet its targets under the Paris climate accord, the authors wrote. Though President Trump announced his intention to withdraw the United States from the accord, many states and municipalities are still working to meet the emissions targets.

For starters, cows don’t efficiently convert plant-based feed into muscle or milk, so they must eat lots of feed. Growing that feed often involves the use of fertilizers and other substances manufactured through energy-intensive processes. And then there’s the fuel used by farm equipment.

In addition, cows burp lots of methane, and their manure also releases this potent greenhouse gas.

“Previous studies of diet-related greenhouse gas emissions have focused mainly on the average diet in a given country. This study is the first in the United States to look instead at self-reported dietary choices of a nationally representative sample of thousands of Americans,” said Diego Rose, principal investigator on the project and a professor of nutrition and food security at Tulane University’s School of Public Health and Tropical Medicine.

By linking their database of environmental impacts to the individual, self-reported diets in the National Health and Nutrition Examination Survey, the U-M and Tulane researchers were able to estimate the distribution of diet-related impacts across the entire U.S. population on a given day.

Meat accounted for 70 percent of the food-associated greenhouse gas emissions in the highest-impact group but only 27 percent in the lowest-impact group.

NHANES is a program of studies designed to assess the health and nutritional status of adults and children in the United States. The survey, which combines interviews and physical examinations, is a major program of the National Center for Health Statistics, which is part of the U.S. Centers for Disease Control and Prevention.

The other authors of the paper, in addition to Heller, Rose and Keoleian, are Amelia Willits-Smith of Tulane’s Department of Global Community Health and Behavioral Sciences, and Robert Meyer, formerly of the U-M Center for Sustainable Systems.