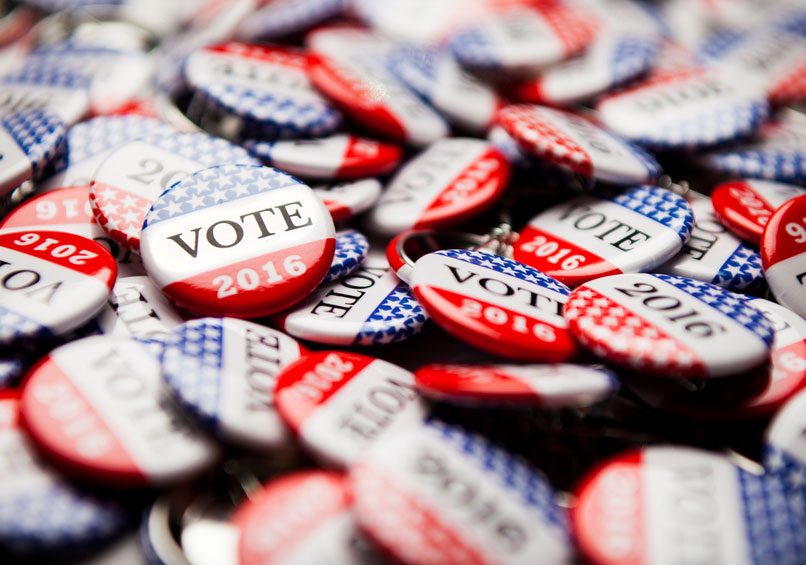 From the primaries and caucuses to Election Day on Nov. 8, the University of Michigan has faculty experts to offer insights on candidates and issues throughout the 2016 U.S. presidential elections.

U-M also has a satellite uplink TV studio and an ISDN radio line for interviews. Media outlets seeking a studio interview with an expert should contact Michigan News producer Mike Wood at 734-647-4412, mwoodmw@umich.edu

Donald Grimes, economist at the Institute for Research on Labor, Employment and the Economy, specializes in economic forecasting and regional economic development. He conducts annual Michigan state and county economic forecasts, and has studied occupational wages in the Great Lakes states and the relationship between education and high-paying jobs.

Jerry Davis is a professor of management and organizations at the Ross School of Business and professor of sociology. His research is broadly concerned with corporate governance and the effects of finance on society. He recently studied how labor-on-demand models, such as Uber, are out of sync with public policy focused on job creation.

Michael Bastedo is professor and director of the Center for the Study of Higher and Postsecondary Education at the School of Education. His scholarly interests are in the governance, politics and organization of public higher education, with particular interests in college admissions, enrollment management and low-income students.

Andy Hoffman, is the Holcim (US) Professor of Sustainable Enterprise at the Ross School of Business and School of Natural Resources & Environment. He also serves as education director of the Graham Sustainability Institute. His research uses a sociological perspective to understand cultural and institutional aspects of environmental issues for organizations.

Barry Rabe, professor of public policy, political science and natural resources and environment, is a nonresident senior fellow at the Brookings Institution. He surveys Americans on issues related to climate change in the National Surveys on Energy and Environment.

Mark Barteau, director of the U-M Energy Institute and the DTE Energy Professor of Advanced Energy Research, can discuss the candidates” energy platforms and pipeline issues.

Dr. John Ayanian, director of the Institute for Healthcare Policy and Innovation, the Alice Hamilton Professor of Internal Medicine and professor of public health and public policy, is a longtime researcher on how access to health insurance affects individuals” access to health care, the quality of care they receive and their health outcomes.

Richard Hirth, professor of health management and policy at the School of Public Health and member of the Institute for Healthcare Policy and Innovation, can discuss the economics of health insurance, health care costs and payment system design.

Richard Lichtenstein, the S.J. Axelrod Collegiate Professor of Health Management and Policy at the School of Public Health, can discuss the relationship between poverty and health, racial and ethnic disparities in health, barriers to health insurance coverage for low-income children, and the effects of discrimination on access to health care.

Peter Jacobson is a professor of health law and policy and director for the Center for Law, Ethics, and Health at the School of Public Health. He can address the legal aspects of dismantling Affordable Care Act, a key issue for many of the candidates.

Martha Jones, co-director of Michigan Law”s Program in Race, Law & History and associate professor of Afroamerican and African studies, has conducted research on the history of race, citizenship and slavery. Jones can discuss Trump’s proposal regarding birthright citizenship, it’s historical and political implications.

James Hathaway, professor of law and director of the Refugee and Asylum Law Program, is a leading authority on international refugee law. He is editor of the Immigration and Nationality Law Reports.

Margo Schlanger, professor of law, is a leading authority on civil rights issues and served as the presidentially appointed officer for civil rights and civil liberties in the U.S. Department of Homeland Security.

Jason De León, assistant professor of anthropology, is author of “The Land of Open Graves: Living and Dying on the Migrant Trail.” He is an expert on the physical realities that characterize the act of border crossing, and has written extensively about the relationship between anti-immigration and hyper-border enforcement rhetoric and presidential election cycles. He is bilingual in Spanish.

Silvia Pedraza, professor of sociology and American culture, has interests in the sociology of immigration, and race and ethnicity in America, Cuba and Western Europe. Her research seeks to understand the causes and consequences of immigration as a historical process that forms and transforms nations.

Sherrie Kossoudji, associate professor of social work, has written numerous articles on the legal status of immigrant workers in the U.S. and the incentives to cross the border illegally. Her work focuses on non-immigrants and the transition to immigration.

Ann Lin, an associate professor of public policy, studies potential immigration policies, such as guestworker programs and legalization, and the political beliefs of American immigrants, with a specific focus on Arab Americans.

Nicholas Valentino, professor of communication studies and political science and a research professor at the Center for Political Studies, is an expert on race and politics, and voting rights.

Linda Lim, a strategy professor in the Ross School of Business, focuses her research on the political economy of multinational and local business in Southeast Asia. That includes the changing international trade and investment environment, and the influence of domestic politics, economic policy and culture on business structure, strategy and operations.

Mark Clague, associate professor of musicology at the School of Music, Theatre & Dance, is an expert on all forms of music-making in the U.S., the national anthem, American popular music, and music and politics in popular culture. He can address the choice of campaign music made by presidential candidates and the frequent backlash they receive from artists whose songs are selected.

Franc Nunoo-Quarcoo is a professor at the Stamps School of Art & Design, where he teaches visual identity and branding, and poster and packaging design. He can discuss campaign branding, logos and design.

Michael Traugott, professor emeritus of communication studies and political science and a senior research scientist at the U-M Center for Political Studies, is an authority on political communication, public opinion and media polling.

Josh Pasek, assistant professor of communication studies, explores how new media and psychological processes shape public opinion and political attitudes and behaviors. He studies whether the use of online social networking sites such as Facebook and Twitter might be changing the political information environment.

Stuart Soroka, the Michael W. Traugott Collegiate Professor of Communication Studies and Political Science, conducts research on political communication, on the sources and structure of public preferences for policy, and on the relationships between public policy, public opinion and mass media.

Brian Weeks, assistant professor of communication studies and faculty associate at the Center for Political Studies, analyzes the consequences of political misperceptions and how citizens engage political information on social media.

Puneet Manchanda is professor and chair of marketing at the Ross School of Business. His main research interest is in building empirical models to solve strategic marketing problems in social media, e-commerce and high-tech. He can talk about political marketing and use of social media by presidential candidates.

Arthur Lupia, the Hal R. Varian Collegiate Professor of Political Science and research professor at the Center for Political Studies, examines how people make decisions when they lack information and in how they manage complex information flows.

Ellen Katz, the Ralph W. Aigler Professor of Law, specializes in election law, civil rights and remedies, and equal protection. Minority representation, political equality and the role of institutions and anti-discrimination laws are some of her areas of expertise. Her articles include an influential empirical study of litigation under the Voting Rights Act.

Mara Ostfeld, postdoctoral fellow at the Ford School of Public Policy and assistant professor of political science (beginning fall 2016), is an expert on Latino political attitudes, as well as the broader relationship between race, identity and public opinion. Mara also works at Telemundo and NBC as an elections analyst.

Aaron Kall, director of the U-M Debate Program and Debate Institute, can discuss speeches given by elected officials.

Robin Queen is the Arthur F. Thurnau Professor and chair of the Department of Linguistics. Her research includes language and mass media.

J. Alex Halderman, professor of computer science and engineering and director of the Center for Computer Security and Society, can discuss vulnerabilities in the U.S. voting system.

Robert Axelrod is the Mary Ann and Charles R. Walgreen Jr. Professor for the Study of Human Understanding and professor of public policy and political science. He can discuss international policy, security and diplomacy.

Luke Shaefer, associate professor of social work and public policy, can discuss the measurement of poverty and alternative metrics for measuring hardship. He has published articles on rising extreme poverty in the U.S., the effects of major anti-poverty programs and low-wage work.

Kristin Seefeldt, assistant professor of social work and public policy, explores how low-income individuals understand their situations, particularly around issues related to work and economic well-being. She conducts research on family financial coping strategies, and the effects of the recession and recovery policies on individuals” well-being.

Reuben Miller, assistant professor of social work, specializes in social welfare policy and the urban poor. He has written about poverty in the U.S.

Joel Slemrod, professor of business economics and public policy, studies and writes about tax policy. He is the co-author of “Taxing Ourselves: A Citizen”s Guide to the Great Debate over Taxes” and “Tax Systems.”

Richard Friedman, the Alene and Allan F. Smith Professor of Law, is an expert on evidence and U.S. Supreme Court history.

Gil Seinfeld, professor of law, teaches and writes about federal jurisdiction, the constitutional law of federalism and civil procedure. He clerked for Antonin Scalia during the October 2002 term.