ANN ARBOR—University of Michigan graduates, students and commencement visitors will have a chance to take a photo atop a “Michigan” waterfall this weekend.

The massive 3D artwork will be created by local husband and wife artist team Dave and Shelley Brenner, who are known for their colorful, large-scale sidewalk illusions that have been featured at various national and international street painting festivals in recent years.

In addition to being part of Ann Arbor’s artistic community, the pair also have many U-M ties. Shelley Brenner, who works as a nurse anesthetist, holds two degrees from U-M, and a master’s from U-M Flint. Dave Brenner, who is a graduate of the University of Alaska Fairbanks, where he also grew up, has been creative director at the U-M School for Environment and Sustainability since 2008. 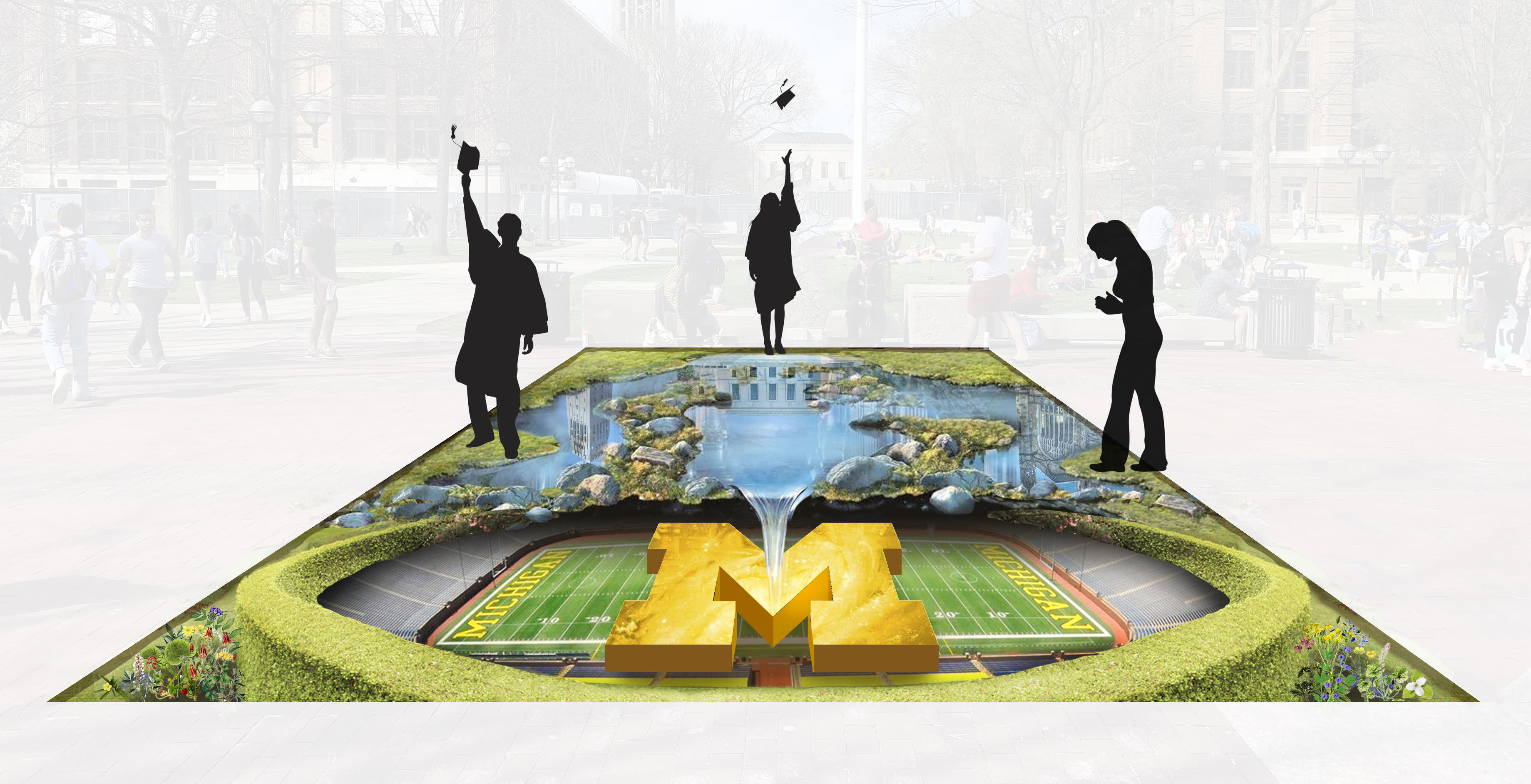 “One of the things that I love about Ann Arbor is the nature aspect,” he said. “I wanted to create a piece that reflected U-M, but also the natural beauty that surrounds the campus. The image of the stadium is emblematic of the university’s energy and team spirit, and the Huron River reflects the delicate balance between the built environment and that of nature.”

The Brenners’ painting features the reflections of iconic U-M landmarks—Burton Tower, Rackham Auditorium and the Law Library—from the waters of the Huron River. A waterfall forms at the water’s edge, emptying into a 3D “Block M” situated above an aerial view of Michigan Stadium. If passersby pose just right, they can appear to be part of the artwork, standing on grass or rocks to avoid “falling” into the water.

The Brenners’ enlisted the help of MaryCarol Hunter, associate professor at SEAS, to identify 19 flowers native to Michigan that bloom in May. The flowers, which are painted around the “Big House,” represent U-M’s 19 schools and colleges.

The installation was commissioned by U-M Social for their yearly commencement engagement project. Though this year’s project is temporary, commencement visitors can still view last year’s project on Maynard and E. William. The “Michigan Wings“—an interactive mural complete with a graduation cap that grads can pretend to toss—was created by artist Kelsey Montague and has become a popular stop for U-M fans and Ann Arbor visitors.

“While this year’s installation offers yet another fun, engaging photo opportunity for our students and their families, it is also intended to inspire reflection, both upon their years at the University of Michigan—including what they post online, and what their future impact will be as a graduate of our institution,” said Nikki Sunstrum, director of social media at U-M. “This messaging is consistent with our ongoing social integrity campaign that promotes online authenticity and digital citizenship, especially in an age when fake news and digital harassment penetrate our social networks and online interactions.”

To complement the U-M Social installation, the U-M Library has installed a large 3D “Block M” on the south side of the Diag. A professional photographer will be on hand to capture photos.