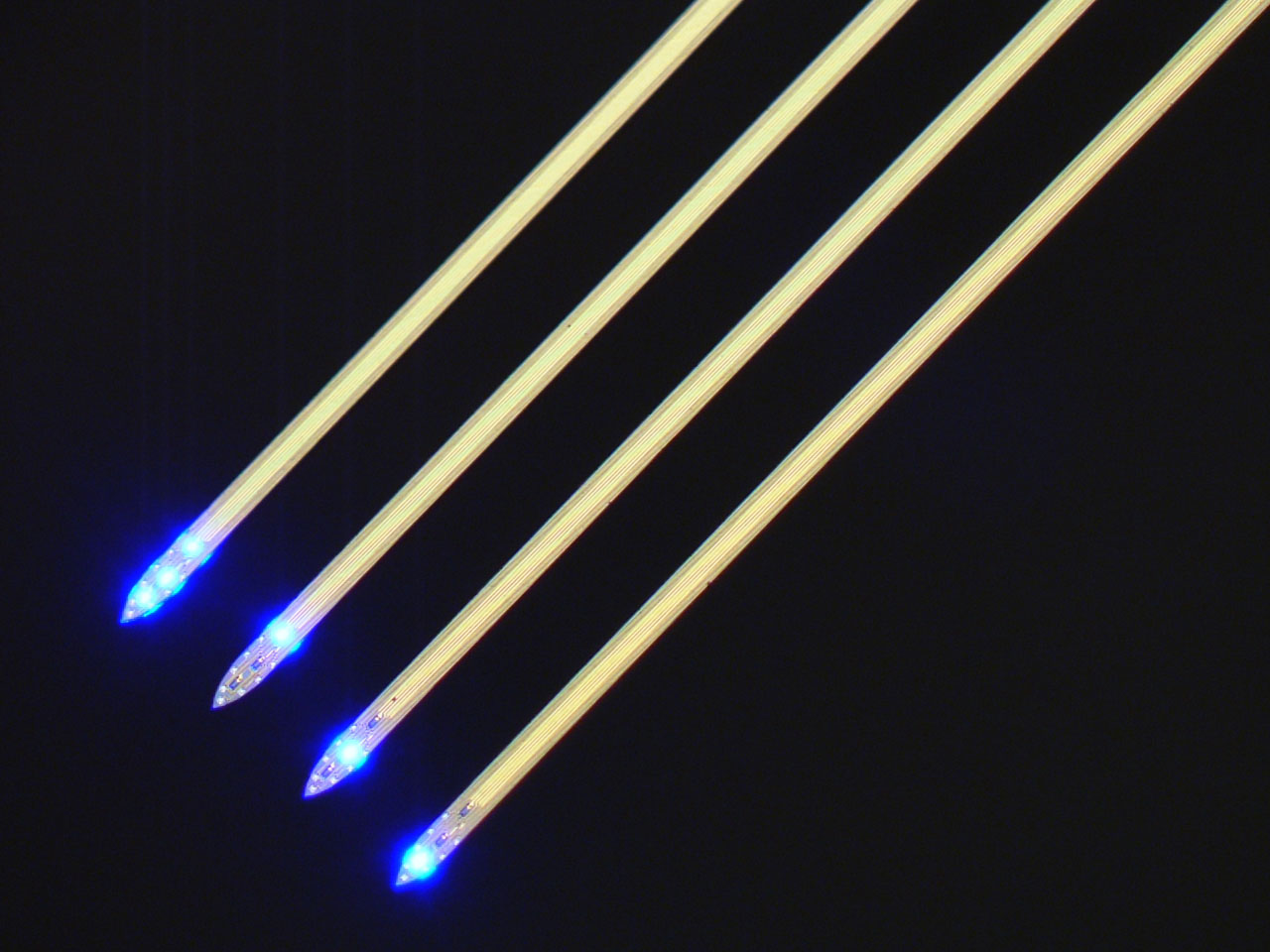 The tines of the probe are just under a tenth of a millimeter wide. Equipped with minuscule LED lights and electrodes, each tine can stimulate and measure about a hundred individual neurons. Images credit: Fan Wu, Yoon Lab, University of MichiganANN ARBOR—A “dream team” of experts in sensors, electronics, data analysis and neuroscience has been awarded a $5 million grant to help unravel the mysteries of the brain and cross-train an international group of neuroscientists and engineers.

The University of Michigan leads the project, funded by the National Science Foundation, to stimulate and sense brain activity at the single-neuron level and reconstruct neural circuits with computer simulations.

“The goal of all of this is better health care,” said Kensall Wise, the William Gould Dow Distinguished University Professor Emeritus and a co-leader of the project. “By bringing together people with different approaches and expertise, the result could be a quantum leap forward in neuroscience and our understanding of the brain.”

The advances in knowledge and neural implant technology could lead to better prosthetics and treatments for conditions like Parkinson’s disease, deafness, blindness, paralysis and depression, Wise said. 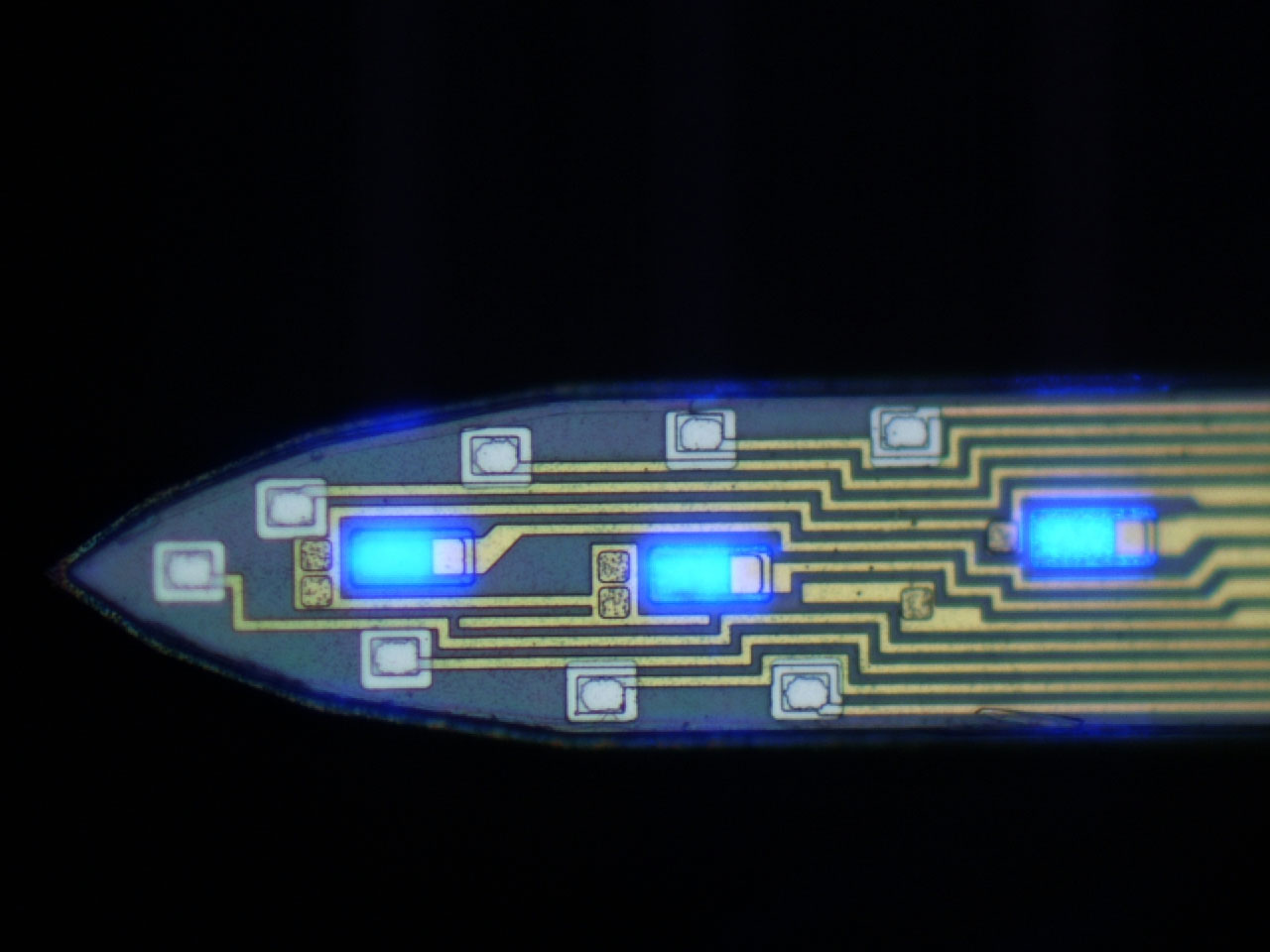 To investigate which neurons produce which behaviors, the team intends to use a technique called optogenetics, which relies on genetically modified neurons that can be switched on and off by different colors of light. By activating and deactivating neurons, researchers can map the neurons and patterns of activity that are responsible for different behaviors and abilities. These tests are typically done with rodents.

At present, most neuroscientists typically use probes that measure only tens of neurons at once and then reconstruct where the firing neurons were located with software, said Euisik Yoon, who heads the project and is a professor of electrical engineering and computer science. He added that recording in the brain is a bit like trying to use a microphone to record from individuals cheering inside a massive arena.

“If you are sitting outside a stadium, you may hear the crowd roar,” Yoon said. “That’s what we have been doing. What we want to do is get into the stadium with a lot of microphones, monitoring and eavesdropping on how these neurons are sending signals to understand what is happening inside the stadium.”

The microphones are optoelectrodes: devices that combine electrodes, which measure activity from nearby neurons, with miniature LEDs that can turn the neurons on and off. The optoelectrode arrays resemble tiny combs, each tine equipped to address hundreds of individual neurons. The tines are so small that the brain tissue does not react to them as much as with larger probes.

Collaborators in Singapore, South Korea and Germany will help to optimize the arrays for the experiments. By the end of the five-year project, neuroscientists should regularly be able to stimulate and measure a thousand neurons at a time using the new technology. The huge improvement in detail will mean new data processing challenges. Kenneth Harris of University College London in the U.K. will develop algorithms for identifying and analyzing signals from individual neurons

Meanwhile, collaborators at New York University, University of Puerto Rico and University of Hamburg-Eppendorf in Germany, will use optoelectrodes and data processing capabilities to answer questions about brain function. These include how memories are stored and retrieved, how fear is learned and evolves over time, how signals from nerves are processed for sensing, and how activity patterns in early life affect adult brain activity.

John Seymour, assistant research scientist in electrical engineering and project co-leader, emphasized that the task of understanding the brain is a long-term challenge.

“People will be studying the brain for a very long time, well beyond our lifetimes,” he said. “One of our main objectives is to develop the next generation of neurotechnologists and neuroscientists who have been cross-trained in both fields and can really push technology both into neuroscience and eventually into health care.”

Fifty-five students and researchers will participate in the international exchange program. Over five years, 40 undergraduate students from U.S. universities will attend a neuroscience and neurotechnology “boot camp” at U-M and then go to a collaborating institution for a summer research project. The grant also allows for 15 graduate students or postdoctoral researchers from the U.S. labs to spend an extended period of time working in a collaborating lab.

Other key researchers from outside the U.S. include Alex Gu at the Institute for Microelectronics in Singapore; Dong Jin Kim of the Korea Institute for Science and Technology in Seoul, South Korea; Oliver Paul of the University of Freiburg in Germany; and Ileana Hanganu-Opatz at the University Medical Center Hamburg-Eppendorf.