A campus tour leads to a partnership in Africa 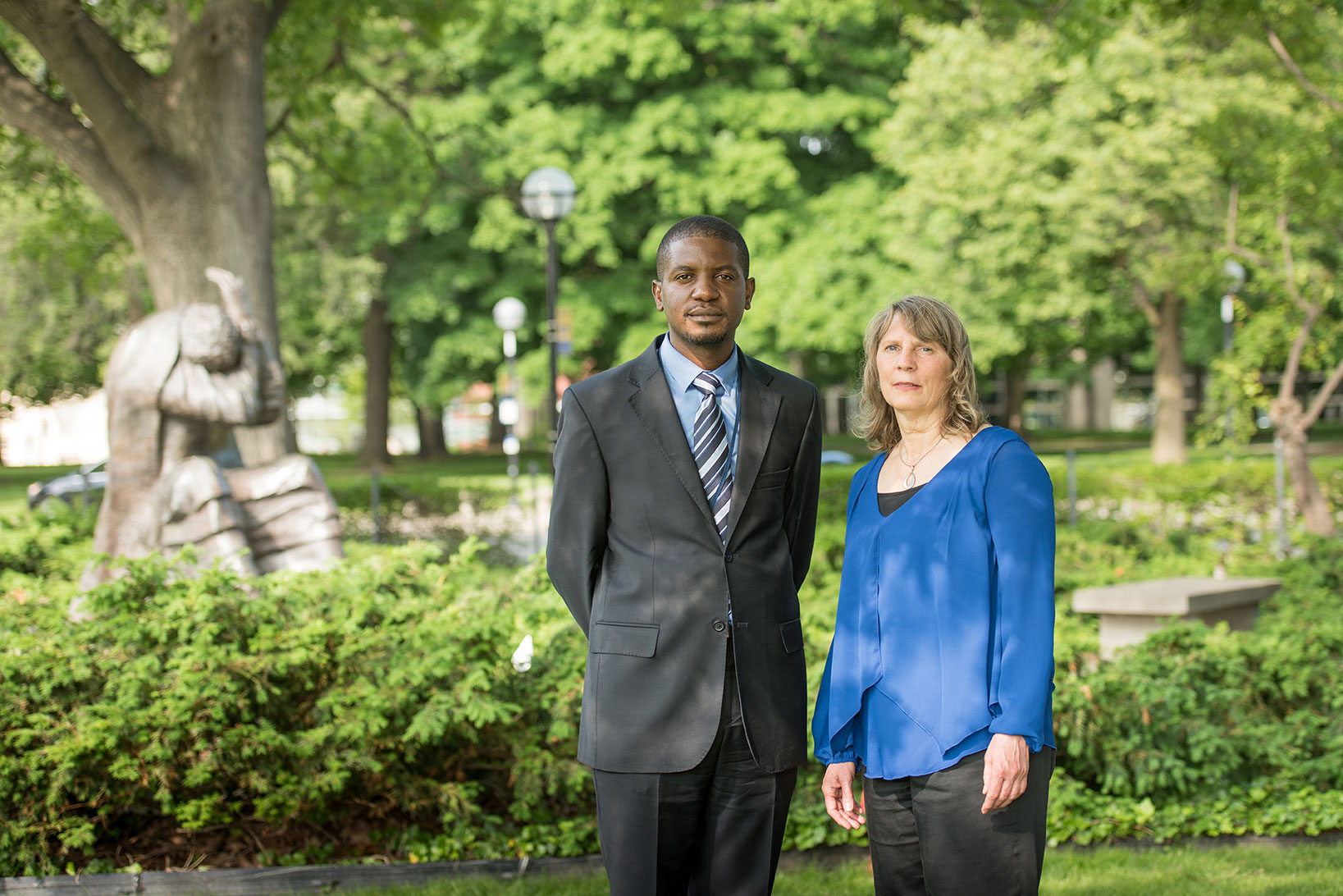 Janis Miller and Alain MukwegeANN ARBOR—Janis Miller was in the middle of a busy fall semester when a colleague knocked on her office door and asked if she could escort a visiting physician from Africa around the campus. The doctor’s name was Denis Mukwege.

“The first thing I said was, ‘How do I pronounce that?”‘ said Miller, an associate professor at the University of Michigan School of Nursing. “This was so not planned. I was supposed to be somewhere else, some routine meetings.”

She spent the day with the doctor from the Democratic Republic of Congo, and although she couldn’t speak French and his English was limited, the two clicked.

Mukwege (pronounced Mook-WAY-gay) was visiting U-M to receive the Wallenberg Medal, a humanitarian award that honors Raoul Wallenberg—an alumnus who saved tens of thousands of Jews during World War II.

“The request felt very personal,” said Miller, who is also a research associate professor in obstetrics and gynecology at the U-M Medical School.

About a year later, Miller was on a flight to Mukwege’s homeland in central Africa, her first trip to the continent.

That chance meeting on the autumn day in 2010 has since grown into a vital partnership with Panzi Hospital, founded by Mukwege. The institution near the eastern city of Bukavu has developed a global reputation for caring for women in one of the most dangerous places in the world for females.

Miller and other U-M professors from nursing, public health, business and social work have been helping to develop training and research programs at Panzi Hospital. The latest development in the relationship involves Mukwege’s son, Alain, who earlier this year became a visiting scholar and research associate at U-M’s School of Nursing. 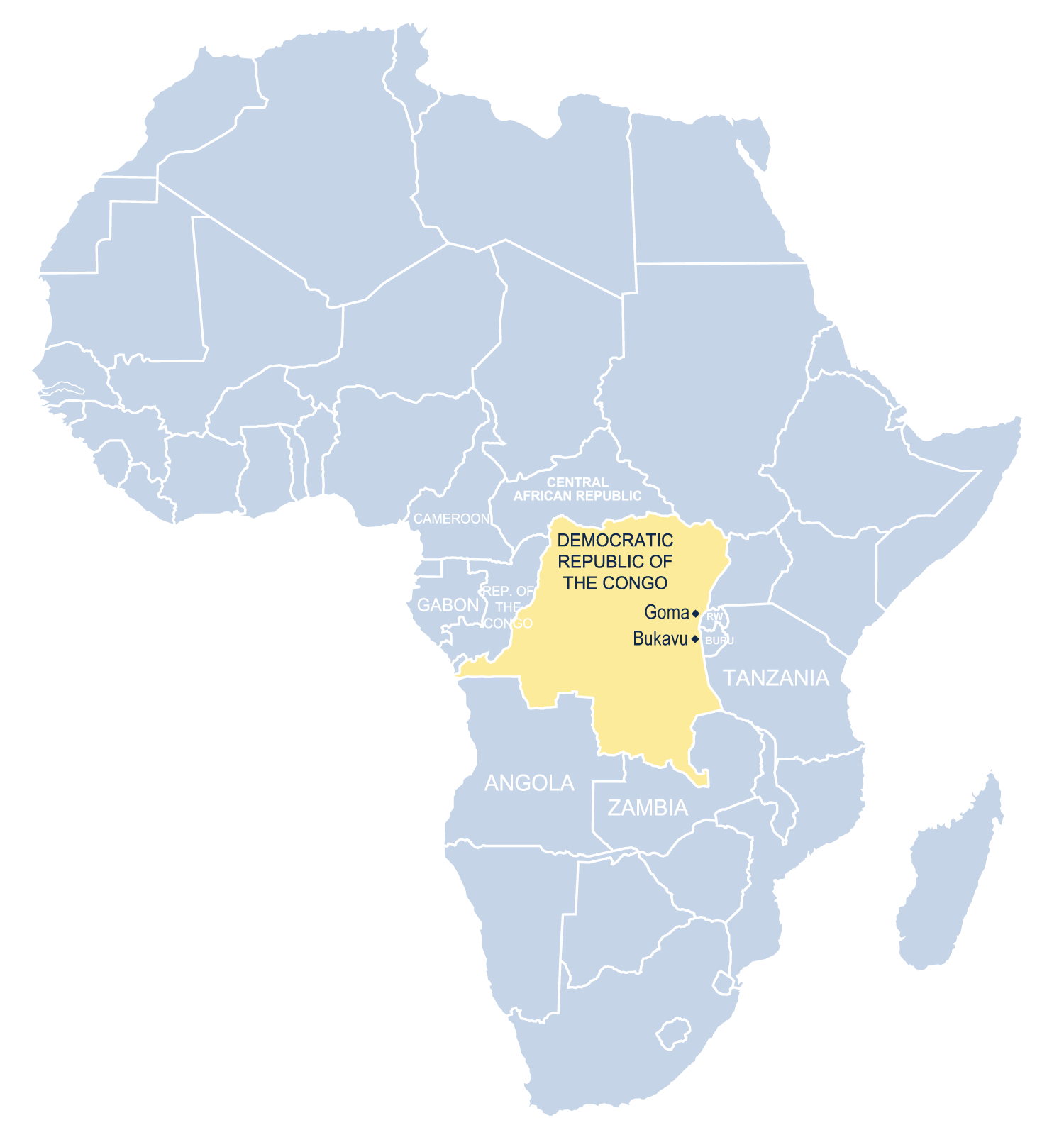 The rape capital of the world. That’s what the Democratic Republic of Congo is often called. And this pains Alain Mukwege.

It’s especially hurtful for the soft-spoken physician because it wasn’t always this way. The outbreak of sexual violence is an imported phenomenon that only started in recent years, he said.

“We never used to talk about rape because it didn’t exist. Mothers and daughters are held in high esteem because they are the foundation of society,” Alain Mukwege said.

So what happened? It’s complex. Fighters from neighboring countries who have crossed into the country have been a source of trouble. Another factor is the legacy of the civil war that ravaged Congo from 1998 to 2002, killing 5 million people—the world’s deadliest conflict since World War II.

Although a ceasefire was signed, the violence continues, especially in the east, where armed groups battle for control of the booming mining industry—Congo’s blessing and curse. Profits from the “conflict minerals” buy more weapons and fuel the fighting. 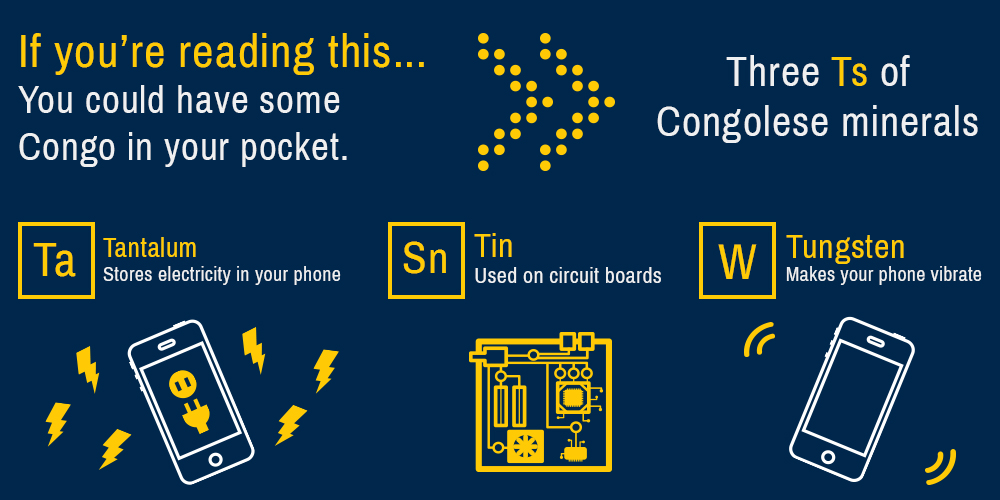 the world—anyone who uses smart phones, laptops and other electronic gadgets. There’s a good chance that those gizmos contain Congolese minerals, such as gold and the three Ts: tantalum (stores electricity in your phone), tungsten (makes your phone vibrate) and tin (used on circuit boards).

It’s challenging for companies to figure out whether the minerals they’re putting in their products come from legitimate mines or criminal networks, rebel groups and corrupt officials. Despite new U.S. regulations, many firms are still using conflict minerals, according to a new report by rights groups.

Much of the turf war for the minerals is being fought on women’s bodies.

“Rape is used as a tool of terror, not just against the person who is raped but definitely against her whole community,” Alain Mukwege said. “It is really conducted to destroy the society, the tissue that holds the community together.

“Once that happens, with very disturbing, atrocious circumstances, it just breaks apart the family structure. They kill the husband or humiliate him to the extent that he is compelled into exile. The children are dispersed, enslaved or forced into being child soldiers. So there are more and more places in the villages that are empty. When entire communities are displaced, the rebels take control and exploit the mineral reserves.”

Since 1999, an estimated 40,000 rape victims have been treated at Panzi Hospital, where Alain Mukwege works when at home.

Panzi Hospital started small in two houses on a corn farm, where Denis Mukwege spent his days performing surgery and delivering babies for women who had moved to the city from the countryside.

But everything began to change after the genocide in neighboring Rwanda in 1994.

“Many soldiers moved from Rwanda to Congo. That’s when the safety issue started, between 1996 and 2000,” Alain Mukwege said. “That is when my father received the first victim of sexual violence that he needed to treat.”

More rape patients began showing up at Panzi Hospital with terrible stories from the countryside. The facility expanded to be a place where women could not only get physical care but also receive psychological treatment in programs organized by the Panzi Foundation DRC, created by Denis Mukwege and his colleagues to promote health care for marginalized populations.

The women are also taught how to read, write, run their own businesses and be self supporting. The farm has become a community of survivors, and the expanding city of Bukavu has now grown out to Panzi Hospital.

The doctor who got his start delivering babies in a former corn field eventually became one of the leaders in the global campaign against sexual violence. Last year, Denis Mukwege received the Sakharov Prize, the European Union’s highest humanitarian honor. But one of his first international honors was awarded at U-M when he received the university’s Wallenberg Medal in 2010.

The nitty gritty of research

Janis Miller, the associate professor in nursing, is embarrassed to admit that she had no plans to even attend the lecture Denis Mukwege gave at the Wallenberg ceremony. Her research was focused on the U.S., not Africa. But the Congolese doctor changed all that.

“We bonded over our mutual interest in helping women whose bottom ends have seen the worst side of the world,” said Miller, whose expertise includes recovery from pelvic tissue trauma in childbirth and the resulting physical and psychological distress.

After her first 10 days on the ground in Congo, it became clear to Miller that she could add the most value at Panzi Hospital by sharing her experience with research—the nitty-gritty, back-office side of things that most lay people take for granted or are unaware of. Such vital tasks include setting up systems for managing budgets, applying for grants, pairing researchers, establishing ethics review boards and assuring integrity in research methods.

Beefing up the research capacity is crucial for countries like Congo because they have as much to teach the world as they do to learn from it. The doctors at Panzi Hospital are treating cases that few physicians will ever see—horrific situations such as women, some very old, who have been violated with sticks, guns and knives. The physicians have created incredible ways to repair tissue, but their crushing caseloads leave them little time to share the expertise with the global medical community.

At U-M, a multidisciplinary team from the fields of nursing, epidemiology, business and social work was formed to figure out how to work with Panzi Hospital and its associated university, Universite Evangelique D’Afrique. The group eventually created the International Center of Advanced Research and Training (ICART). Launched with seed funding from U-M’s Third Century Initiative, the center opened in 2013 and began developing training and research programs in Bukavu.

The Congolese doctor returned to Ann Arbor in 2013 to discuss ways to strengthen research linked to Panzi Hospital. But his visit was cut short when he was urgently called to the United Nations to be a signatory to a declaration on the elimination of sexual violence.

At the time, Alain Mukwege, who was earning a master’s degree in clinical research at the Mayo Clinic, came to Ann Arbor to see his father. Miller said she was so impressed with the way the son so naturally filled his father’s shoes during a strategic planning meeting the elder Mukwege couldn’t attend.

As Panzi Hospital tries to attract and sustain more international partnerships, the hospital needs to be able to document its work with data, said Miller, who still travels to Congo and also hunts for funding needed to continue ICART’s work.

“Everyone wants reports and evaluations of the many programs launched at Panzi. They want the statistics. They want the numbers,” she said. “Meanwhile, Panzi physicians and nurses are very busy giving care, but they’ve got to be cranking numbers. It’s a different skill set. Part of what we’re doing at ICART is helping to build numbers that are correct, but not completely taking away from the caregiver’s time.”

Not everyone is pleased with Panzi Hospital’s work. Armed groups have threatened Denis Mukwege numerous times for his denunciations of sexual violence. Shortly after speaking at the United Nations in 2012, he came home to find gunmen menacing his children. They fired at him and he dove to the ground, narrowly missing the bullets. His house guard was killed in the assault. The physician now lives behind the gates of his hospital with armed bodyguards.

“Before 2012, I was very worried. Every time the phone rang, I was afraid I would hear bad news from Congo,” Alain Mukwege said. “But now I can sleep at night knowing that he has security around him that protects him to the best of their capacity.”

Threats to Panzi Hospital’s future also emanate from the Congolese government, which has harassed the institution with financial and legal cases that have nearly caused the hospital to shut its doors.

Alain Mukwege believes it’s important to speak out about his country’s problems. But his energy is also focused on preparing for medical residency, which he hopes to do at U-M. He’s also getting on-the-ground experience with running research projects, writing grants and publishing research findings.

“I want to tell people what’s going on, but I want to focus on developing the skills to go home to help my father,” he said. “We want to sustain the mission of the hospital and its related programs. That’s our main goal.”

People interested in supporting ICART can contact the U-M School of Nursing Office of Development and External Relations at 734-764-1545.