A football helmet design that listens to physics

ANN ARBOR—A shock-absorbing football helmet system being developed at the University of Michigan could blunt some dangerous physics that today’s head protection ignores.

The engineering researchers making the system, called Mitigatium, were recently funded by a group that includes the National Football League. Their early prototype could lead to a lightweight and affordable helmet that effectively dissipates the energy from hit after hit on the field. Current helmets can’t do this, and that’s one of the reasons they aren’t very good at preventing brain injury.

“Today’s football helmets are designed to prevent skull fractures by reducing the peak force of an impact,” said Ellen Arruda, U-M professor of mechanical engineering and biomedical engineering. “And they do a good job of that. But they don’t actually dissipate energy. They leave that to the brain.”

Sports like football present big challenges for the designers of protective head gear. To dissipate energy, a helmet typically has to deform, like the bike version cracks in a collision. And disposable helmets aren’t practical for football players.

When a bike helmet breaks, it’s absorbing what’s called “impulse”—a secondary effect of an initial force. Impulse, which gives objects momentum, is what transmits kinetic energy through a system. It takes into account not just force, but also how long that force was applied. To calculate impulse, you multiply the average force by the length of time it was exerted on the subject.

For head protection to be most effective against the speeds and weights of players on a football field, these researchers say it has to block impulse.

They’re not the first to say this. They’ve found medical studies from 70 years back that blame impulse for damage from football-style, quick impacts. Yet today, helmet makers and health researchers alike tend to rely on other factors. For example, new helmet designs are approved based solely on the peak force they can withstand.

“Everyone is focused on the force of an impact and only the force,” Arruda said. “But they’ve found that when they measure peak force on the surface of the skull, they can’t correlate that with brain injury. The reason is that force is only part of the story.”

Scientists and doctors don’t fully understand how a blow to the head translates to brain injury, but the U-M researchers say impulse is a big factor. Arruda and her colleagues have demonstrated this.

They’ve taken one of the first close looks at the mechanical features of impacts and blasts and how helmets and other armor might be designed to do a better job protecting sensitive structures. o do that, they built two-dimensional mock cross-sections of materials that stood in for the brain and skull in various helmet shells. Then they use a table-top collision simulator to test the different samples. They compared how much energy was transmitted through to the brain-type layer in their own helmet system and the status quo. They used a high-speed camera to help them observe how the brain model deformed in both systems.

“Some of the insight we got from this analysis was subtly different from how the helmet community thought about design, although we found examples in old medical literature that were consistent with our understanding,” said Michael Thouless, the Janine Johnson Weins Professor of Engineering in mechanical engineering and materials science and engineering.

In their experiments, the current helmet model did little to block impulse. The researchers could tell this by how much the speckled pattern on their brain layer distorted. The Mitigatium prototype, however, reduced impulse to just 20 percent of what got through to the brain model in the conventional helmet. Mitigatium reduced peak pressure to 30 percent. It lowered both by an order of magnitude, Arruda said. 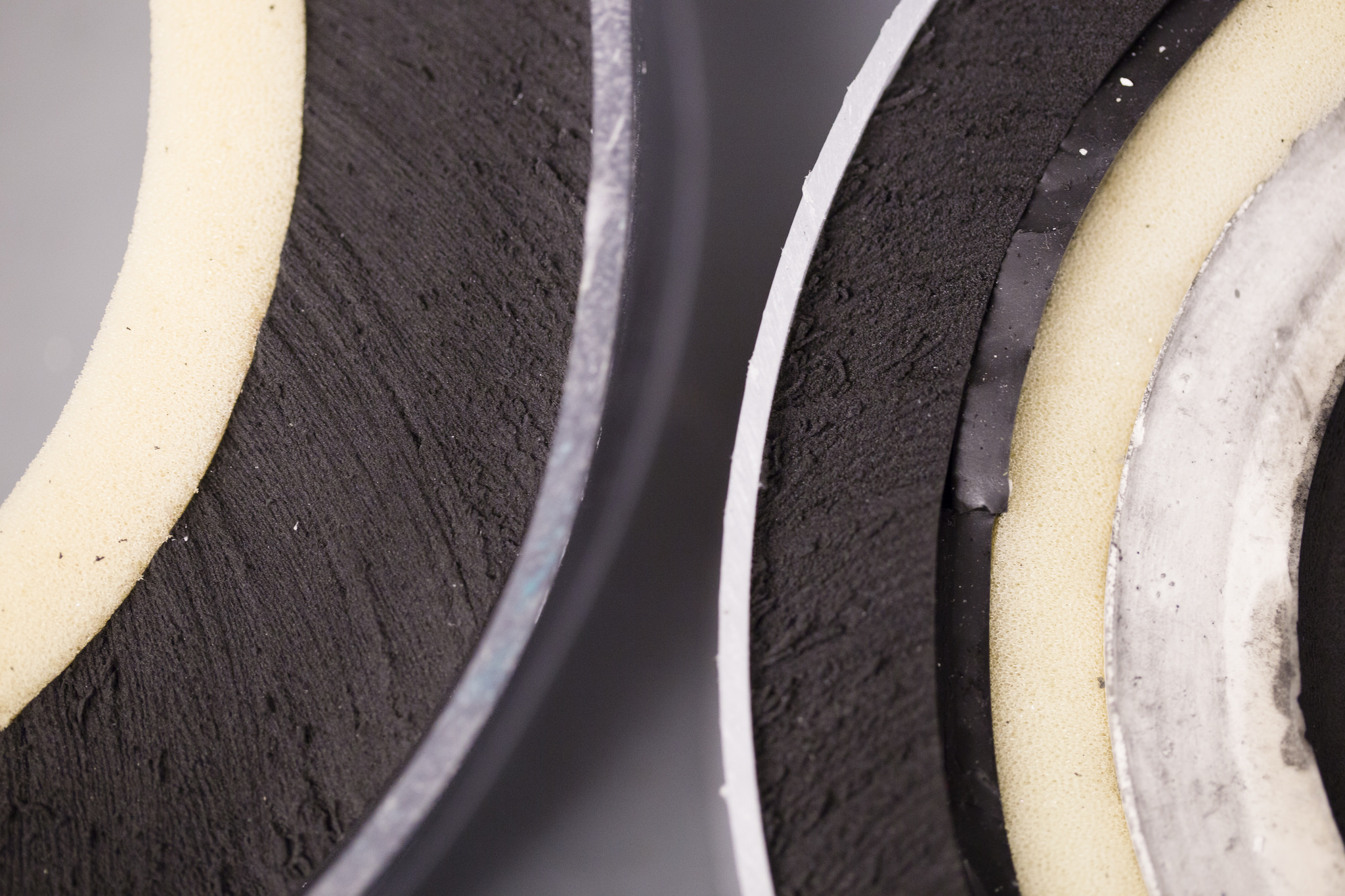 Layering on the left represents the padding in current football helmets, while the layering on the right shows off the new material (the thin, shiny and black layer). Photo: Evan Dougherty, Michigan Enginering Communications & MarketingHere’s how it works: It’s made of three materials that amount to more than the sum of their parts. The first layer is similar to the hard polycarbonate that’s the shell of present-day helmets. The second is a flexible plastic. Together these substances reflect most of the initial shock wave from a collision—most of the initial force. They also do something else unique and important: They convert the frequency of that incoming pressure wave to a frequency that the next layer can, in essence, grab ahold of and dissipate by vibrating. This third “visco-elastic” layer has the consistency of dried tar.

“We’ve come up with a totally new concept of how to make efficient impact-mitigating structures that could dissipate energy without being damaged,” Thouless said. “And we used basic concepts of mechanics to develop a fundamental understanding of how to protect delicate structures such as the brain.”

Late last year, the U-M team was one of five winners of the Head Health Challenge III, a competition to support the development of materials that better absorb or dissipate impact. Aside from the NFL, sponsors are Under Armour, GE and the National Institute of Standards and Technology. The U-M researchers received $250,000 to take their technology to the full prototype stage. Doctoral candidate Tanaz Rahimzadeh is also contributing to this project.

The researchers also point out that their system is extremely flexible, in that different materials could be used to tune different incoming pressure waves. They envision their approach to have applications for the military and other protective gear, as well as for playground surfaces.

A paper on some of these findings, titled “Design of armor for protection against blast and impact,” is published in the Journal of the Mechanics and Physics of Solids. Rahimzadeh is the first author.

The University of Michigan is working to identify commercialization partners to help bring the technology to market.