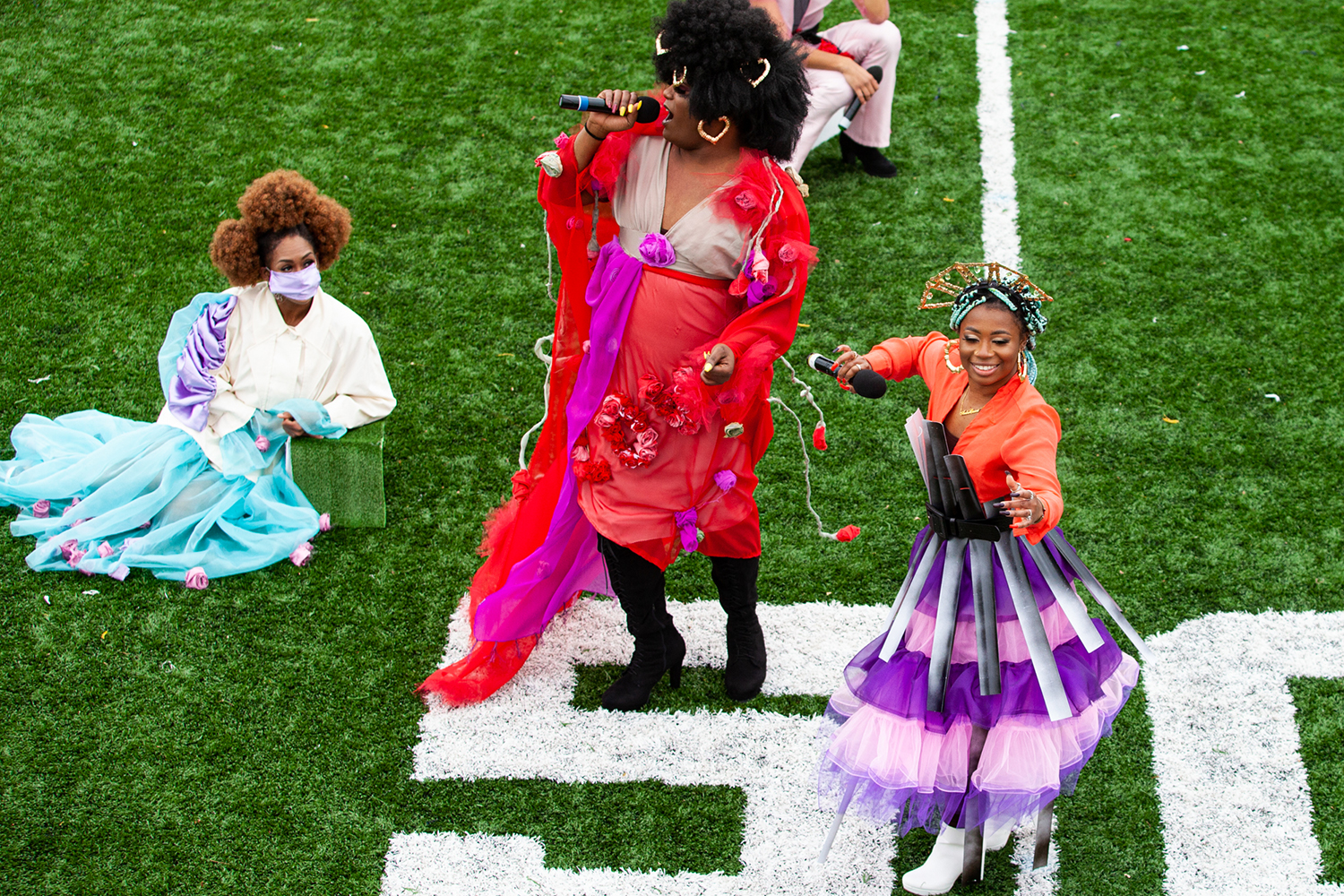 Themes of Black feminism and perseverance will take center stage in a new improvisational performance that will premiere as part of the University of Michigan’s winter 2021 Stamps Distinguished Speaker Series season kick-off event on Jan. 22.

The work was produced and directed from more than 600 miles away by New York-based performance artist Ayana Evans, who collaborated with U-M Stamps School of Art & Design professor Rebekah Modrak and students in her “Dressing Up and Down” course during the fall 2020 semester.

Evans, a Roman J. Witt Visiting Artist at Stamps, is known for her guerilla-style street performances and public interventions where she uses her physicality to express ideas about the body, race and gender. These ideas were present as she worked through a series of phone calls, Zoom meetings and emails to communicate what her next big performance would be—a spectacular show on U-M’s Elbel Field, complete with cheerleaders from the U-M Cheer team, vocalists and actors from the U-M School of Music, Theatre & Dance and professional artists based in Detroit. 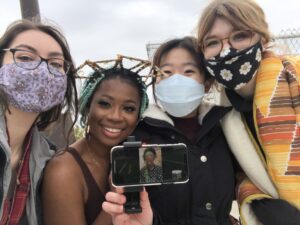 Ahead of the performance, which was filmed Oct. 25 with strict safety protocols in place, Evans worked behind the scenes with Stamps students, who translated her elaborate costume renderings into works of wearable art.

“She asked us to watch the film Mahogany, which helped us to understand the spirit and vibe of what she wanted for the performance,” said Shannon Yeung, a Stamps senior, who was part of Modrak’s class. “She also incorporated the use of venetian blinds into the design, which was an interesting challenge to translate into a physical costume.”

Yeung, who worked on costume construction with a team of other Stamps students, also spent several hours acting as Evans’ eyes and ears through Facetime during the shoot while she made decisions and directed from afar. 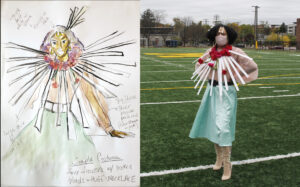 Ayana Evans’ sketch of costume worn by Detroit-based dancer Cleo Anderson. Students in the University of Michigan’s Stamps School of Art & Design created the costumes for Evans’ performance as part of professor Rebakah Modrak’s “Dressing Up and Down” course.

“While there was planning done for the performance, there were also many decisions that had to be made on the day of filming, and I was really grateful that she put so much trust in us to deliver her message” she said.

Mahogany, the 1975 film starring Diana Ross about a struggling fashion design student who becomes a popular fashion designer, was one of the main sources of inspiration for Evans.

“The strength of Diana Ross as an actress is that there are moments in all of her films where she ‘breaks’ and looks crazy and screams—it seems effortless,” said Evans. “And it’s in these moments when she seems to be channeling trauma more than she is acting trauma. These moments are what I am interested in.” 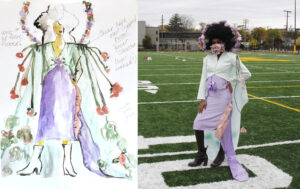 The performance opens with a startling scene where each of the lead actors walk up and spits straight into the camera, an effect created using a plexiglass box.

​”Ayana uses her body to express discomfort and joy—and we can see this through the students and dancers that participated in making the film,” Modrak said. “Though it takes on a new meaning when so many of us are so conscious of the impact of our breath and aerosols, spitting is something that she has incorporated into performance before—it’s a way of expressing anger or disgust.”

According to Modrak, Evans’ signature performances also have many celebratory elements alongside the discomfort. That joy is depicted as the 17 minute-long film moves from cheerleaders “primping” the main characters ahead of improvised high-energy performances of Al Green’s “Let’s Stay Together” and Tina Turner’s “Better Be Good To Me.”

“During the Tina Turner song, we all stripped down to nude suits—for me it was an actual brown suit that was the color of my skin, which I really appreciated—and we just danced,” said Jailisa Spell, an SMTD graduate student and one of lead vocalists for the performance. “For me, as a Black trans woman, it felt very powerful to act out the idea of putting on a face for the world every day and then just living in those moments when you’re able to be free and be yourself.”

According to Evans, who performed all of her artist-in-residence duties virtually due to the coronavirus pandemic, the work is as much about striving for the freedom that Spell felt as it is about dismantling hierarchies of the past.

“My work is a tribute to Black resilience and creativity,” she said. “It is also an acknowledgment of the anger, beauty, destruction and rebuilding of our current times—racially, economically and mentally. Last but not least, this is a love letter to Black femmes who have set many trends in pop culture and gave us examples of the joy perseverance can bring.”

In conjunction with the premiere of the film, “You Better Be Good To Me,” Evans will give a virtual presentation as part of the Penny Stamps Speaker Series at 8 p.m. Jan. 22. The 2020-21 series is brought to audiences this year with the support of Detroit Public Television and PBS Books.

Evans will also participate in a virtual Q&A event with Reginald Jackson, associate professor of Japanese literature and performance, about her work at 5:30 p.m. Jan. 25. The event “Is Acceptance the Future of Art?” is hosted by the U-M Arts Initiative’s Future of Art series, which explores the nature of art, the role of the artist in society and the future of art. Registration is required.

Both events, which are free and open to the public, are part of the 2021 U-M Rev. Dr. Martin Luther King Jr Symposium.

Note: The performance, which is available upon request ahead of the Jan. 22 premiere, will be published to the artist’s Vimeo following the event.