A material that most liquids won’t wet 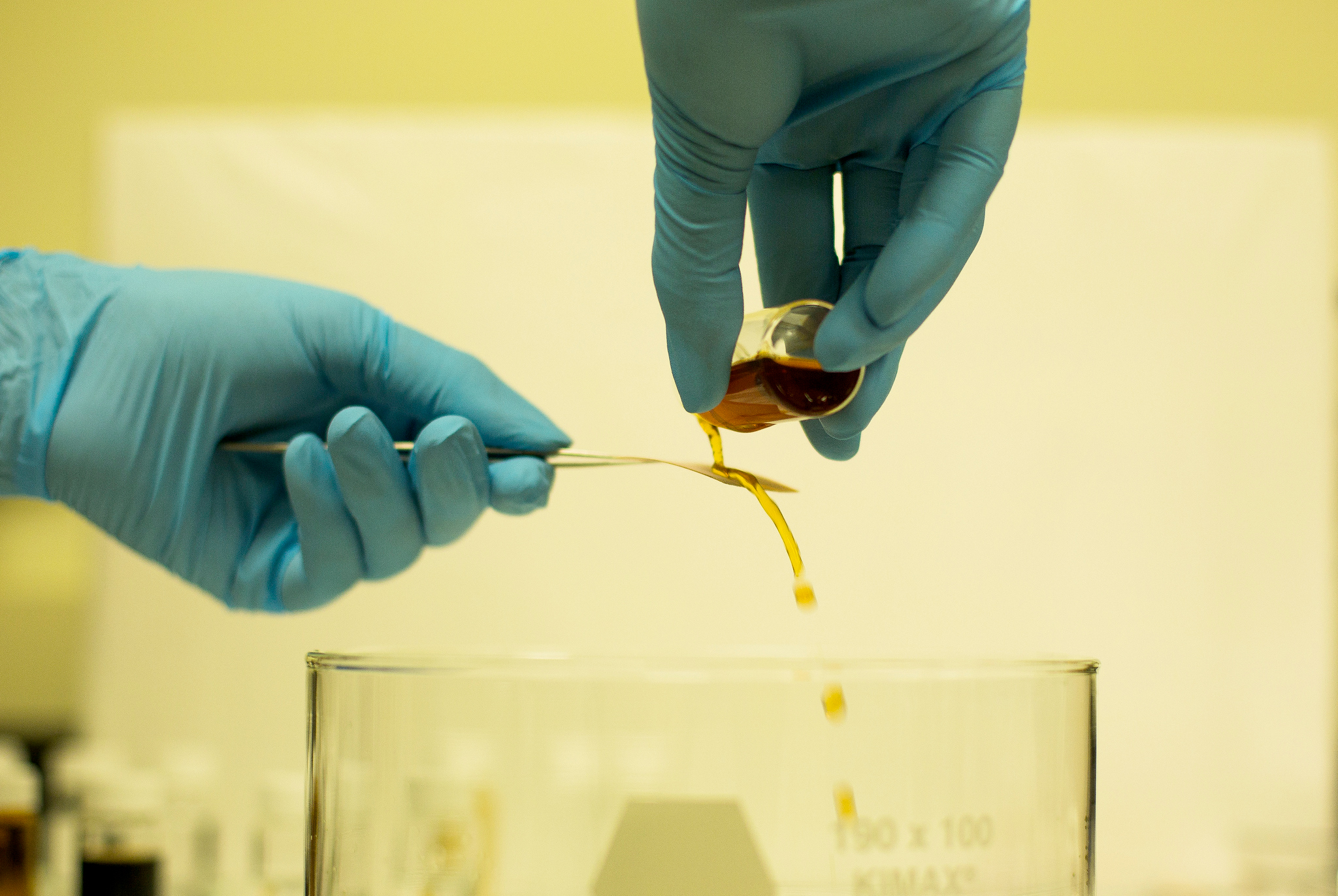 A new coating developed at the University of Michigan can repel virtually any liquid and could lead to breathable protective wear for soldiers and scientists, as well as stain-proof garments. In this demonstration, it repels coffee. Image credit: Joseph Xu, Michigan Engineering Communications & Marketing

ANN ARBOR—A nanoscale coating that’s at least 95 percent air repels the broadest range of liquids of any material in its class, causing them to bounce off the treated surface, according to the University of Michigan engineering researchers who developed it.

In addition to super stain-resistant clothes, the coating could lead to breathable garments to protect soldiers and scientists from chemicals, and advanced waterproof paints that dramatically reduce drag on ships.

Droplets of solutions that would normally damage either your shirt or your skin recoil when they touch the new “superomniphobic surface.”

“Virtually any liquid you throw on it bounces right off without wetting it. For many of the other similar coatings, very low surface tension liquids such as oils, alcohols, organic acids, organic bases and solvents stick to them and they could start to diffuse through and that’s not what you want,” said Anish Tuteja, assistant professor of materials science and engineering, chemical engineering and macromolecular science and engineering.

Tuteja is the corresponding author of a paper on the coating published in the current issue of the Journal of the American Chemical Society.

He and his colleagues tested more than 100 liquids and found only two that were able to penetrate the coating. They were chlorofluorocarbons—chemicals used in refrigerators and air conditioners. In Tuteja’s lab, in a demonstration, the surface repelled coffee, soy sauce and vegetable oil, as well as toxic hydrochloric and sulfuric acids that could burn skin. Tuteja says it’s also resistant to gasoline and various alcohols. 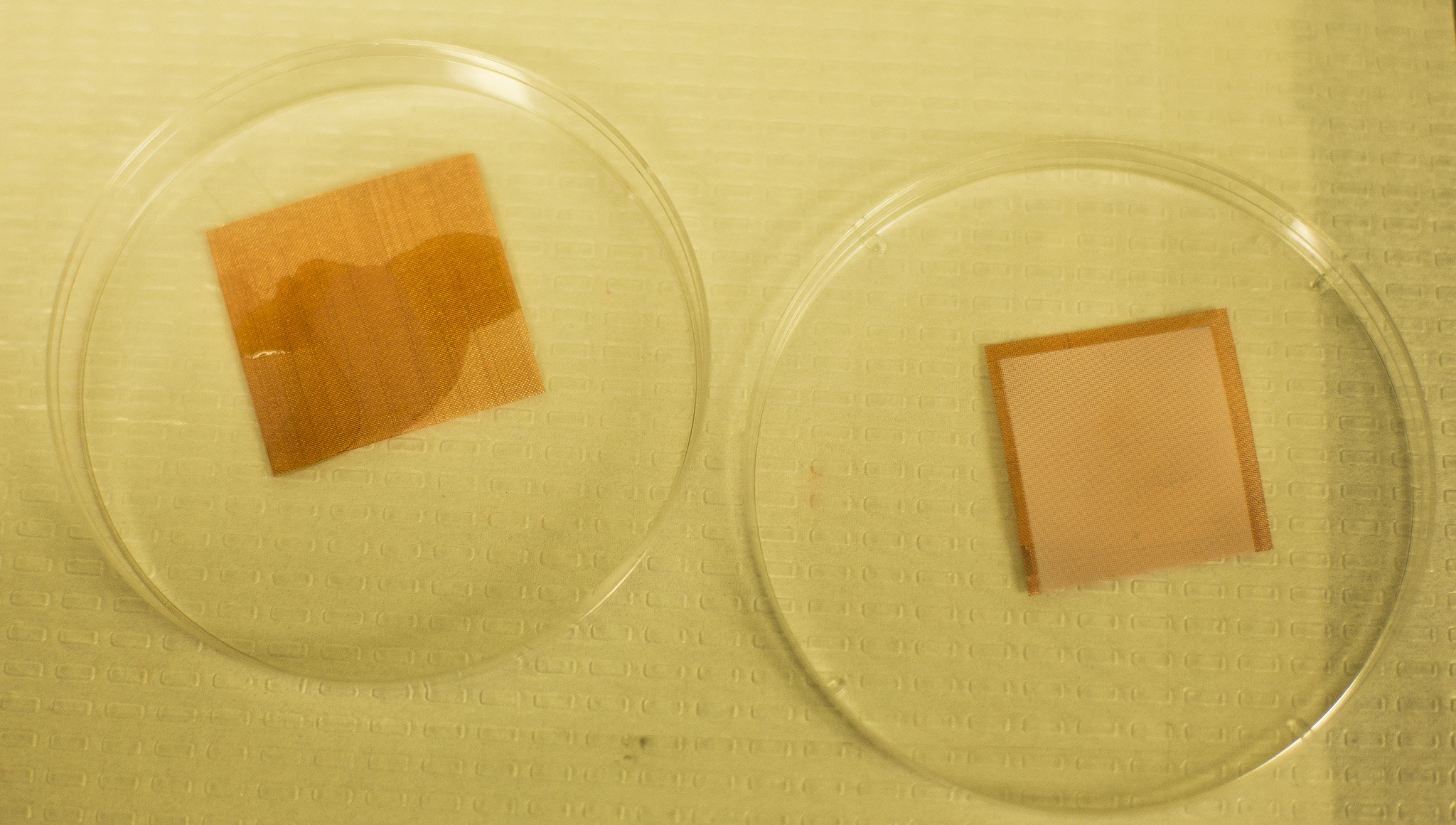 An uncoated tile of screen is wetted by liquids, but a treated piece remains dry. University of Michigan researchers have developed a “superomniphobic” surface that can repel virtually any liquid. Image credit: Joseph XuTo apply the coating, the researchers use a technique called electrospinning that uses an electric charge to create fine particles of solid from a liquid solution. So far, they’ve coated small tiles of screen and postage-stamp-sized swaths of fabric.

The coating is a mixture of rubbery plastic particles of “polydimethylsiloxane,” or PDMS, and liquid-resisting nanoscale cubes developed by the Air Force that contain carbon, fluorine, silicon and oxygen. The material’s chemistry is important, but so is its texture. It hugs the pore structure of whatever surface it’s being applied to, and it also creates a finer web within those pores. This structure means that between 95 and 99 percent of the coating is actually air pockets, so any liquid that comes in contact with the coating is barely touching a solid surface.

Because the liquid touches mere filaments of the solid surface, as opposed to a greater area, the developed coating can dramatically reduce the intermolecular forces that normally draw the two states of matter together. These Van der Waals interaction forces are kept at a minimum. 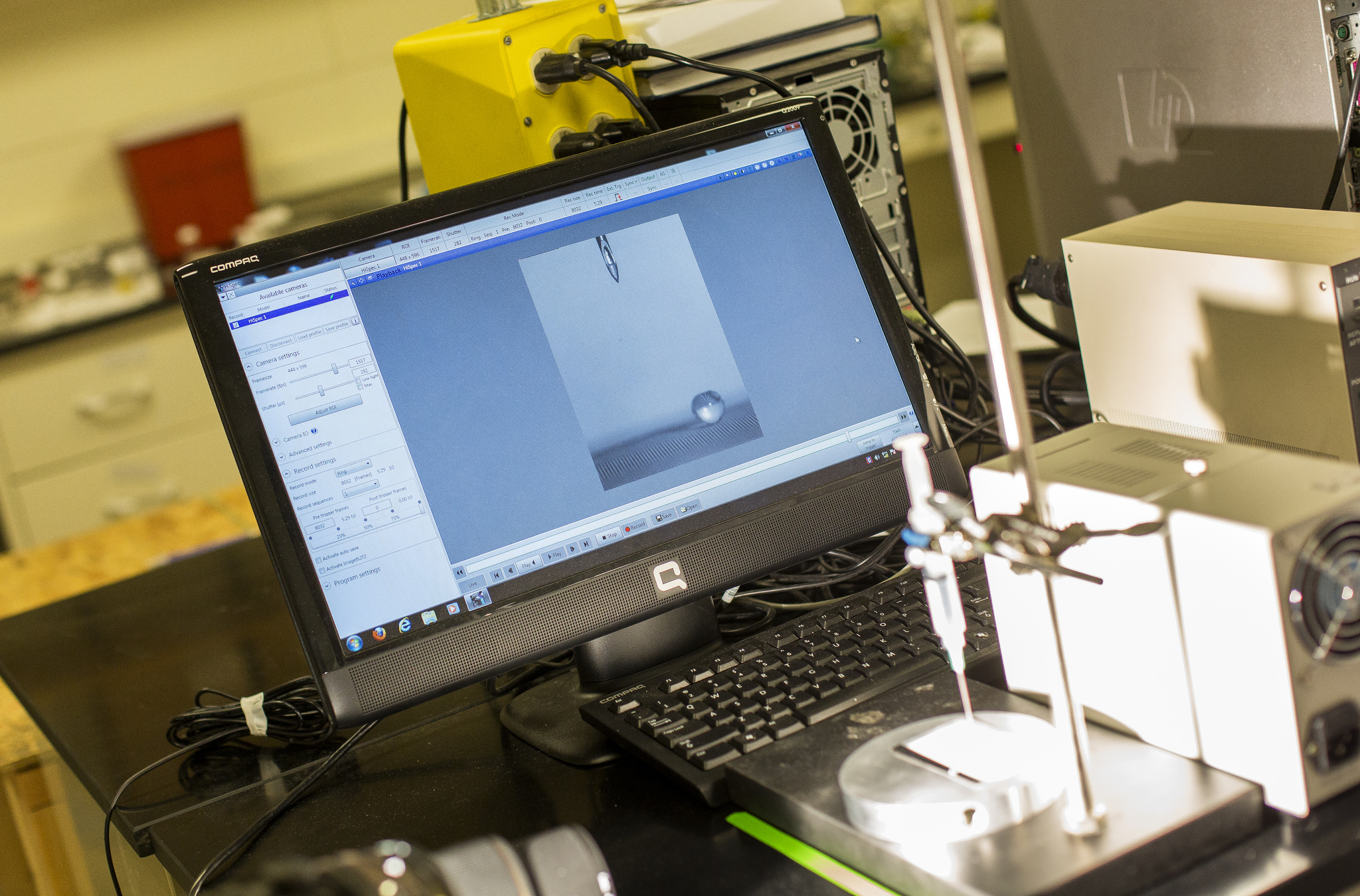 A high-speed camera captures a droplet resting on the surface of a new super-repellant surface developed at the University of Michigan. Image credit: Joseph Xu“Normally, when the two materials get close, they imbue a small positive or negative charge on each other, and as soon as the liquid comes in contact with the solid surface it will start to spread,” Tuteja said. “We’ve drastically reduced the interaction between the surface and the droplet.”

With almost no incentive to spread, the droplets stay intact, interacting only with molecules of themselves, maintaining a spherical shape, and literally bouncing off the coating.

One classification of liquid that this coating repels is the so-called non-Newtonian category, which includes shampoos, custards, blood, paints, clays and printer inks, for example. These are liquids that change their viscosity depending on the forces applied to them. They differ from the Newtonians, such as water and most other liquids, whose viscosity stays the same no matter the force applied. Viscosity is a measure of a liquid’s resistance to flow on the application of force, and it’s sometimes thought of as its thickness.

The paper is titled “Superomniphobic Surfaces for Effective Chemical Shielding.” Doctoral student Shuaijun Pan and postdoctoral researcher Arun Kota, both in materials science and engineering, are the first authors of the paper. Also contributing is Joseph Mabry, in the rocket propulsion division of the Air Force Research Laboratory. The work is funded by the Air Force Office of Scientific Research.