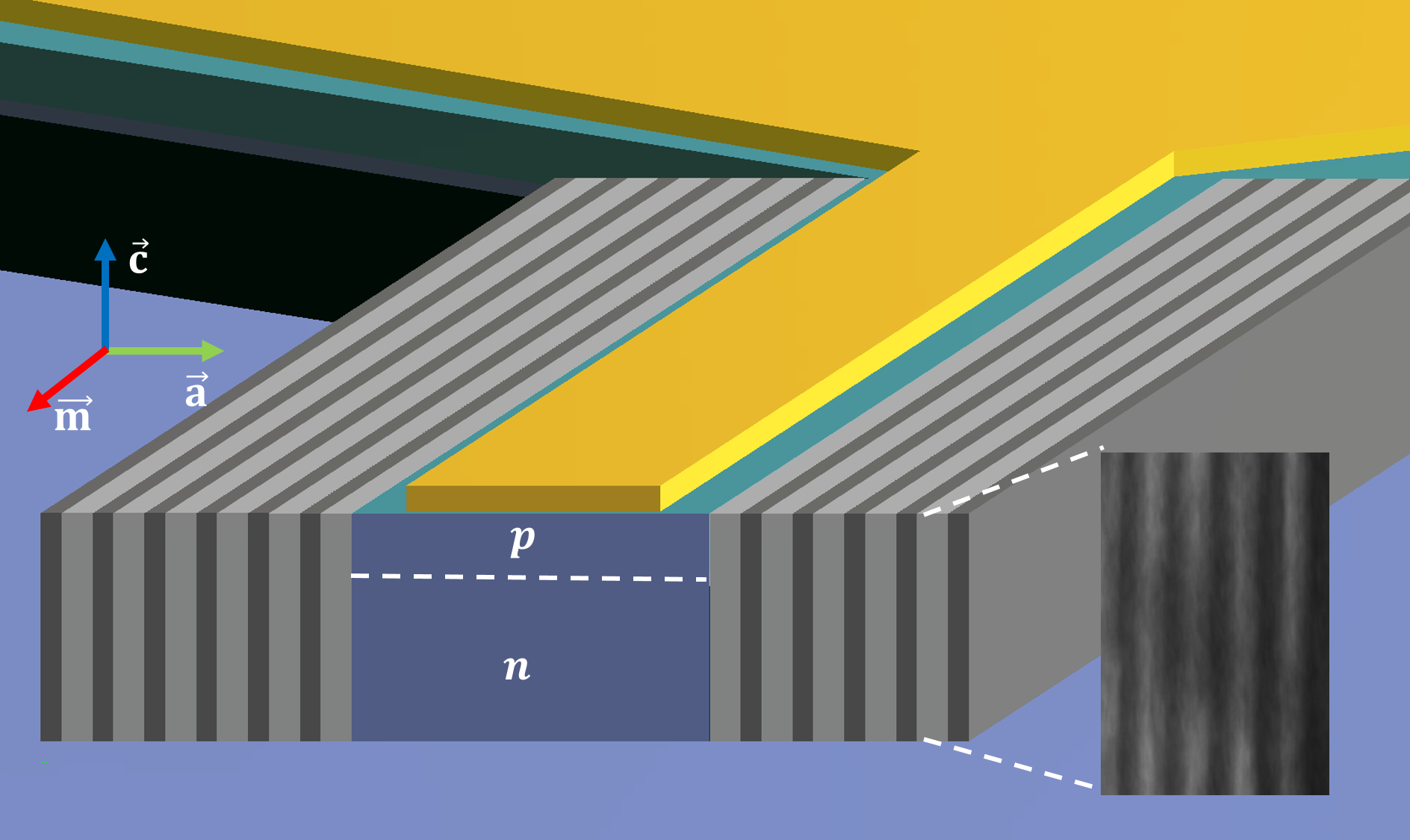 University of Michigan researchers have demonstrated what’s believed to be the first practical polariton laser, which makes light beams in a more efficient way than conventional lasers. To accomplish this, they devised an innovative design that involved moving the required mirrors from the top and bottom of the device to the sides. The mirrors are represented by the gray bars. The yellow is the electrode through which the researchers stimulate the laser. The purple is the gallium nitride semiconductor that is able to maintain ideal conditions for polaritons to form and release light. Image credit: Thomas FrostANN ARBOR—With precarious particles called polaritons that straddle the worlds of light and matter, University of Michigan researchers have demonstrated a new, practical and potentially more efficient way to make a coherent laser-like beam.

They have made what’s believed to be the first polariton laser that is fueled by electrical current as opposed to light, and also works at room temperature, rather than way below zero.

Those attributes make the device the most real-world ready of the handful of polariton lasers ever developed. It represents a milestone like none the field has seen since the invention of the most common type of laser – the semiconductor diode – in the early 1960s, the researchers say. While the first lasers were made in the 1950s, it wasn’t until the semiconductor version, fueled by electricity rather than light, that the technology took off.

This work could advance efforts to put lasers on computer circuits to replace wire connections, leading to smaller and more powerful electronics. It may also have applications in medical devices and treatments and more.

The researchers didn’t develop it with a specific use in mind. They point out that when conventional lasers were introduced, no one envisioned how ubiquitous they would become. Today they’re used in the fiber-optic communication that makes the Internet and cable television possible. They are also in DVD players, eye surgery tools, robotics sensors and defense technologies, for example.

A polariton is part light and part matter. Polariton lasers harness these particles to emit light. They are predicted to be more energy efficient than traditional lasers. The new prototype requires 250 times less electricity to operate than its conventional counterpart made of the same material.

“This is big,” said Pallab Bhattacharya, the Charles M. Vest Distinguished University Professor of Electrical Engineering and Computer Science and the James R. Mellor Professor of Engineering at U-M. “For the past 50 years, we have relied on lasers to make coherent light and now we have something else based on a totally new principle.”

In a typical laser, light–or more often electrical current– is pumped into a material called a gain medium that’s designed to amplify the signal. Before the pumping begins, most of the electrons in the gain medium are in their least energetic state, also known as the ground state. Once the light or current hits them, the electrons absorb that energy and move to a higher-energy state. At some point, more electrons are high-energy than are low-energy and the device is said to have achieved a “population inversion.” Now any light or current that goes in has the opposite effect on the excited electrons. It kicks them down to the ground state and releases pent-up light in the process.

Polariton lasers don’t rely on these population inversions, so they don’t need a lot of start-up energy to excite electrons and then knock them back down. “The threshold current can be very small, which is an extremely attractive feature,” Bhattacharya said.

He and his team paired the right material – the hard, transparent semiconductor gallium nitride – with a unique design to maintain the controlled circumstances that encourage polaritons to form and then emit light.

How it works
A polariton is a combination of a photon or light particle and an exciton – an electron-hole pair. The electron is negatively charged and the hole is technically the absence of an electron, but it behaves as if it were positively charged. Excitons will only fuse with light particles under just the right conditions. Too much light or electrical current will cause the excitons to break down too early. But with just enough, polaritons will form and then bounce around the system until they come to rest at their lowest energy level in what Bhattacharya describes as a coherent pool. There, the polaritons decay and in the process, release a beam of single-colored light.

The beam they demonstrated was ultraviolet and very low power – less than a millionth of a watt. For context, the laser in a CD player is about one-thousandth of a watt.

“We’re thrilled,” said Thomas Frost, a doctoral student in electrical and computer engineering. “This is the first really practical polariton laser that could be used on chip for real applications.”

The design the team used helped them achieve the beam with an electrical rather than light input signal. Getting the electrical current into the system requires electrodes sandwiching the gallium nitride and several layers of mirrors to render the electrical signal useable. Other groups’ approaches put the electrodes outside the mirrors. Bhattacharya said it was tough to get the signal strong enough under those circumstances. So he deconstructed the sandwich. He put the mirrors on the sides of the gallium nitride and left the electrodes on the top and bottom.

The paper, “Room Temperature Electrically Injected Polariton Laser,” will be published online in Physical Review Letters on June 10. The work was funded by the National Science Foundation.