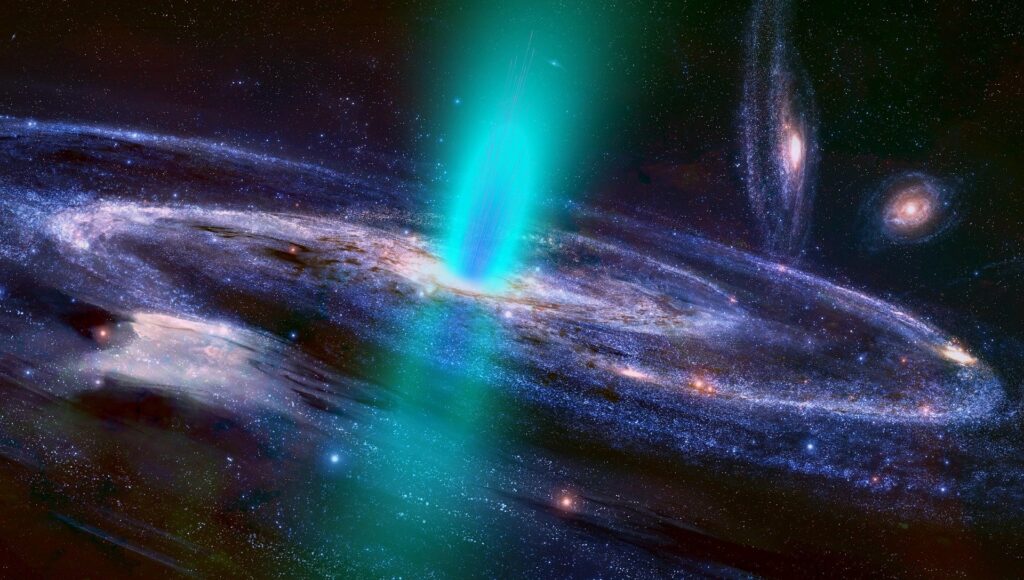 Quasars are extraordinarily distant celestial objects that throw off a massive amount of light, and astrophysicists use them to probe cosmological theories.

In some cases, astrophysicists have used them to estimate the rate at which the universe expands, called the Hubble constant.

Now, a team of researchers from the University of Michigan and the University of Hawaii’s Institute of Astronomy are suggesting a new way to use them to measure the expansion of the universe directly. They propose a method called intensity correlation speckles to measure the difference between the redshift—in which light stretches as it travels through an expanding universe, causing its wavelength to elongate—in two paths of light from the same quasar. The team’s method was published in the journal Physical Review A.

When a massive galaxy cluster lies between Earth and a given quasar, light from the same quasar can travel directly to us or bend around the galaxy cluster because of the effect of the cluster’s gravity. Light that bends around clusters can arrive up to 100 years after light that travels to Earth in a straight line. This can cause a quasar to become what’s called strongly lensed: To our eyes, what looks like four quasars is actually one quasar whose light is refracted to us by the foreground galaxy clusters’ gravitational pull.

Theoretically, physicists could measure the redshift of the light that travels in a curved path to Earth from a single quasar and compare it to the redshift of the light that travels to Earth along a different path. However, although time delay has been determined for a small number of quasars by measuring the time variation in their colors, directly measuring the tiny redshift between the two paths, corresponding to a small expansion of the universe during a decade or so, has not been possible so far.

“The redshift of these different images are delayed, and in that delay, the universe has expanded. Measuring this can’t be done with ordinary spectrographs, where you measure the wavelength of the light very accurately for two closely spaced lines. The reason that can’t be done is because the light source contains all sorts of atoms that are moving randomly and emitting radiation that is Doppler shifted,” said U-M physicist Gregory Tarlé.

This collection of Doppler shifts, called Doppler broadening, causes light frequencies to spread out within the same image to the extent that it’s difficult to obtain an accurate measurement of the average redshift of one quasar image.

“The project came out of an idea I had for a while, which is to measure the expansion of the universe directly. The problem is that we have no spectrograph that could measure the small redshift of the universe that happens in 100 years,” said University of Hawaii cosmology theorist Istvan Szapudi. “Such a measurement would directly tell us how much the universe expanded in 10 years, eventually determining the Hubble constant, the present holy grail of cosmology.”

Tarlé and Szapudi approached U-M optical physicist Roberto Merlin, who suggested using a method from optical physics called intensity correlation. This method takes into account the collection of frequencies of this Doppler-broadened light and compresses the frequencies into an average line. Tarlé likens it also to the harmony you hear when two very similar tuning forks are hit, or when two closely tuned strings are strummed together on a 12-string guitar.

Applying this approach to light from quasars, the light that bends to Earth along one path has one average frequency, and the light bending along another path has another average frequency. Merlin’s method measures the difference between those two averages. If it finds that one path of light is traveling, for example, at 50 miles per hour, and a certain time later, is traveling at 52 miles per hour, the physicists can devise the acceleration of the quasar.

“Our effect takes advantage of the fact that Doppler and other forms of broadening have little effect on the relative difference between the colors of light emitted by the atoms if the unbroadened colors are very similar,” said Noah Green, a U-M physics graduate student and paper coauthor. “It’s as if our ambulances each have two klaxons playing pitches that are musically very close together, and out of the cacophony we can figure out how far apart those pitches are.”

The new method is equivalent to ultra high resolution spectroscopy, says Szapudi. Not only could it allow the direct measurement of the expansion of the universe for the first time, but there might be other applications that the researchers have not yet imagined.

Tarlé says next steps to test this theory would be to develop instrumentation that could be placed upon large ground-based telescopes. This instrument would precisely measure the arrival time of photons emitted by strongly lensed quasars so that physicists could determine the quasar’s redshift.

“And so if we could do that then we could not only measure the Hubble constant directly as a function of red shift, we could also measure the impact of dark energy on the acceleration of the universe,” Tarlé said. “This is why this is so exciting.”