A rare crash at the Milky Way’s core: U-Michigan astronomers could be the first to see it 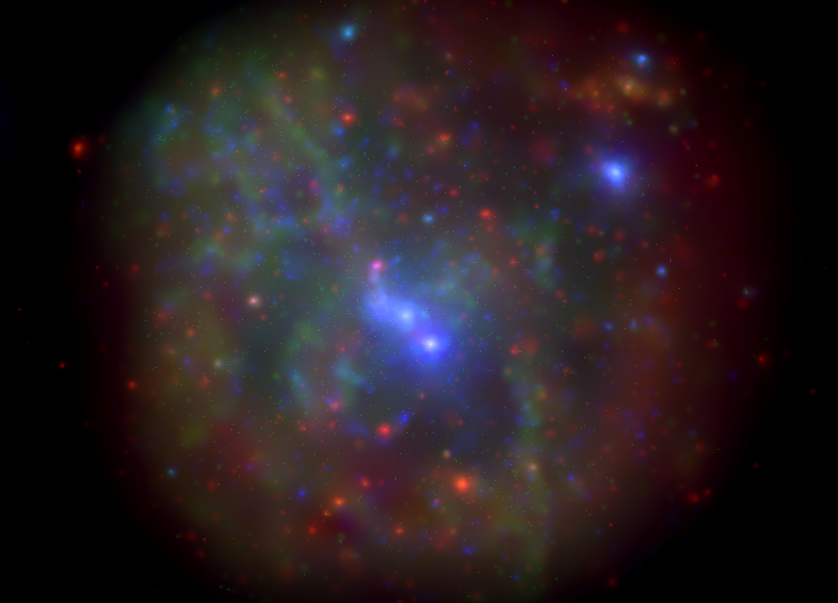 The galactic center as imaged by the Swift X-ray Telescope. This image is a montage of all data obtained in the monitoring program from 2006-2013. Image credit: NASA/Swift/N. Degenaar (Univ. of Michigan)ANN ARBOR—University of Michigan astronomers could be the first to witness a rare collision expected to happen at the center of the galaxy by spring.

With NASA’s orbiting Swift telescope, the U-M team is taking daily images of a mysterious gas cloud about three times the mass of Earth that’s spiraling toward the supermassive black hole at the Milky Way’s core. From our vantage point, the core lies more than 25,000 light years away in the southern summer sky near the constellations Sagittarius and Scorpius.

The gas cloud, called G2, was discovered by astronomers in Germany in 2011. They expected it to hit the black hole, called Sagittarius A* (pronounced Sagittarius A-star by astronomers), late last year. That didn’t happen, but the cloud continues to drift closer. Astronomers now predict that the impact will occur in the next few months.

Astronomers have never seen anything like this, much less with a front-row seat.

“Everyone wants to see the event happening because it’s so rare,” said Nathalie Degenaar, who leads this imaging effort as a Hubble research fellow in the Department of Astronomy at the College of Literature, Science, and the Arts.

Supermassive black holes are believed to lurk at the centers of all elliptical and spiral galaxies. The Milky Way’s, by comparison, is dim—about a hundred million times fainter than scientists might expect. But it’s likely the more common variety, Degenaar said.

“We think that the fainter ones are the majority, but it’s very difficult to study those,” she said. “We just can’t see them. Ours is the only one we can study to understand what their role is in the universe.”

Black holes eat matter from their surroundings and blow matter back. The way they do that influences the evolution of the entire galaxy—how stars are formed, how the galaxy grows, how it interacts with other galaxies. Nathalie Degenaar

The collision will give astronomers a unique opportunity to see how faint supermassive black holes feed and perhaps why they don’t consume matter in the same way as their brighter counterparts in other galaxies. While black holes themselves are invisible and don’t permit light to escape, the material falling into them shines in X-rays.

Since 2006, Degenaar and her colleagues have been using Swift’s X-ray instruments to observe not just Sagittarius A*, but also some smaller black holes and neutron stars that reside at the galaxy’s center with it. Neutron stars are the smallest, most dense star remnants from those that aren’t quite massive enough to collapse into black holes.

The Swift observatory is the only telescope providing daily updates at X-ray wavelengths where the crash will show up most profoundly, the researchers said. Those capabilities, coupled with a research tool developed by Mark Reynolds, an assistant research scientist in astronomy at U-M, will help provide the first evidence of the collision. This tool quickly analyzes changes in the X-ray brightness of images across days—a sudden increase could signal impact. It also immediately posts the images online.

While astronomers expect to see a change in brightness, they don’t know how dramatic it will be because they aren’t sure exactly what the gaseous G2 object is. If it’s all gas, the region would glow in the X-ray band for years to come as the black hole slowly swallows the cloud. But another possibility is that G2 could be shrouding an old star. If that’s the case, the display would be less spectacular as Sagittarius A* slurped from the cloud while the star slipped by, dense enough to fight its grasp.

“I would be delighted if Sagittarius A* suddenly became 10,000 times brighter. However it is possible that it will not react much—like a horse that won’t drink when led to water,” said Jon Miller, a U-M associate professor of astronomy who also works on the project. “If Sagittarius A* consumes some of G2, we can learn about black holes accreting at low levels—sneaking midnight snacks. It is potentially a unique window into how most black holes in the present-day universe accrete.”

Black holes play a key role in the life cycles of galaxies.

“They eat matter from their surroundings and blow matter back. The way they do that influences the evolution of the entire galaxy—how stars are formed, how the galaxy grows, how it interacts with other galaxies,” Degenaar said. “Even more broadly, the way galaxies evolved is important for the evolution of the whole universe, how it came into being and how it’s changing.”