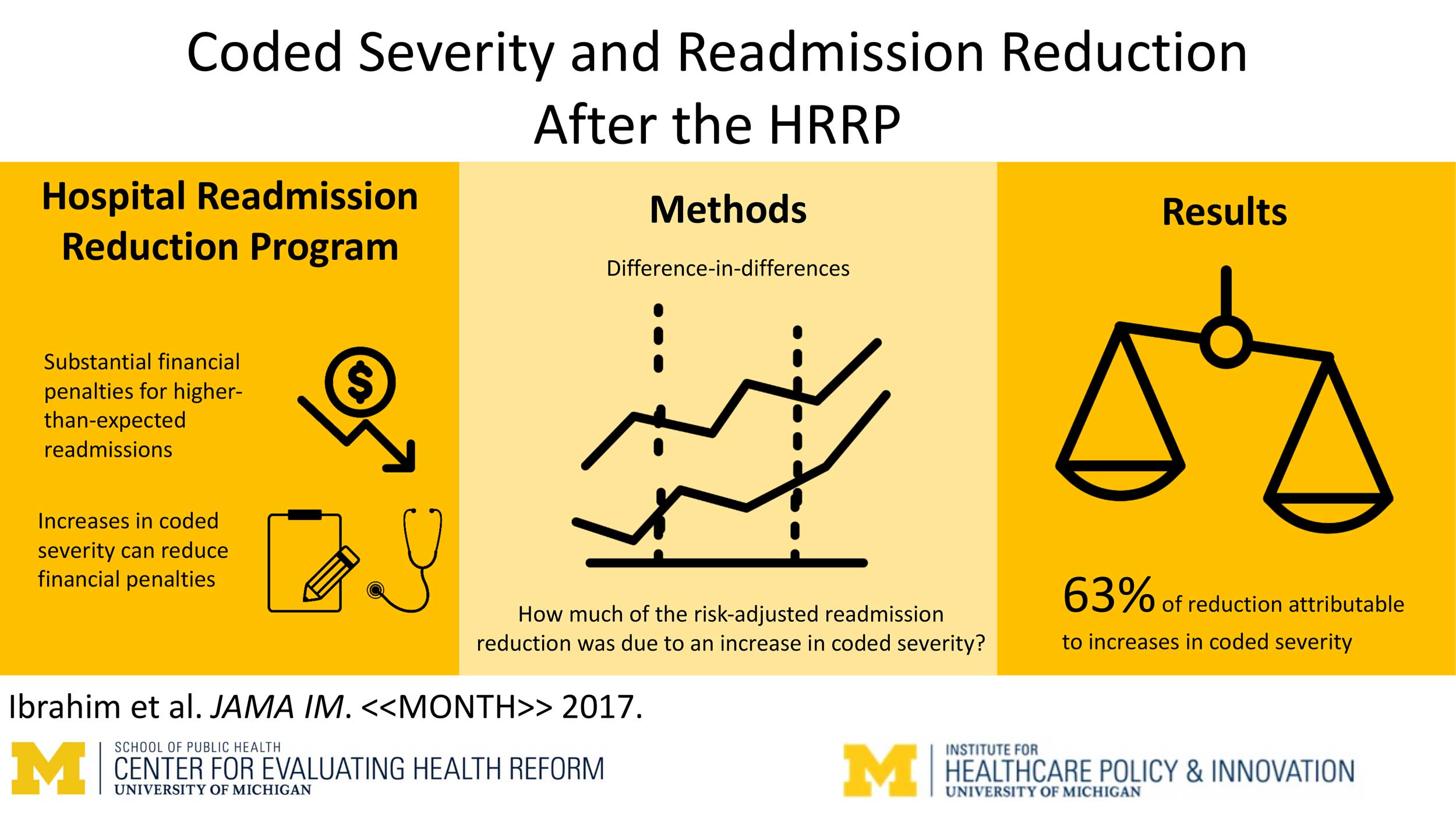 ANN ARBOR—A federal program that has been shown to reduce hospital readmissions may not have been as successful as it appears, University of Michigan researchers report in the latest issue of the Journal of the American Medical Association Internal Medicine.

The researchers from the U-M Institute for Healthcare Policy and Innovation and the School of Public Health, found that 63 percent of the reduction in patients heading back to the hospital, as reported under the Hospital Readmission Reduction Program, could be attributed to the way diagnoses were coded.

“While there is clear evidence that readmission rates dropped after the HRRP, the amount may not be as much as we initially thought,” said first author Andrew Ibrahim, house officer in the Department of Surgery at Michigan Medicine. “A large proportion of the observed reductions appear to be attributable to increases in how hospitals document the severity of admitted patients.”

The Hospital Readmission Reduction Program, part of the Patient Protection and Affordable Care Act, was established in 2010. It penalizes hospitals for higher-than-expected rates of readmission within 30 days for Medicare patients with heart attack, heart failure or pneumonia.

When patients are admitted to the hospital, physicians document their primary and any secondary diagnoses. Coding of diagnoses is intended to signify the status of patients at the time of admission to third-party payers. For example, a patient admitted for a heart attack may also have secondary diagnoses of obesity and hypertension (high blood pressure). More secondary documented diagnoses tend to translate into a higher level of severity.

Previous research on the program showed readmission rates began to fall in 2012 and have continued to drop, suggesting that the interventions hospitals put in place to improve care quality were working.

The U-M researchers found an increase in the coding of secondary diagnoses after the Hospital Readmission Reduction Program was initiated, which impacted risk-adjusted coding severity. The number of coded secondary diagnoses increased by 20 percent at control hospitals, but went up by 39 percent at hospitals subject to the Hospital Readmission Reduction Program.

The researchers said it’s hard to know how much their results reflect efforts to game the system by altering coded-severity or represent a real increase in the severity of patients.

“Risk-adjustment is a common and necessary practice. However, because risk is determined by providers’ coding practices, it has the potential to be manipulated.” said Andrew Ryan, associate professor of health management and policy at the U-M School of Public Health. “It is possible that hospitals exposed to the HRRP undercoded severity prior to the HRRP, rather than overcoding severity after the program. Nonetheless, there is a long history of health care providers and health plans, increasing the coded severity of patients when it is to their advantage to do so.”