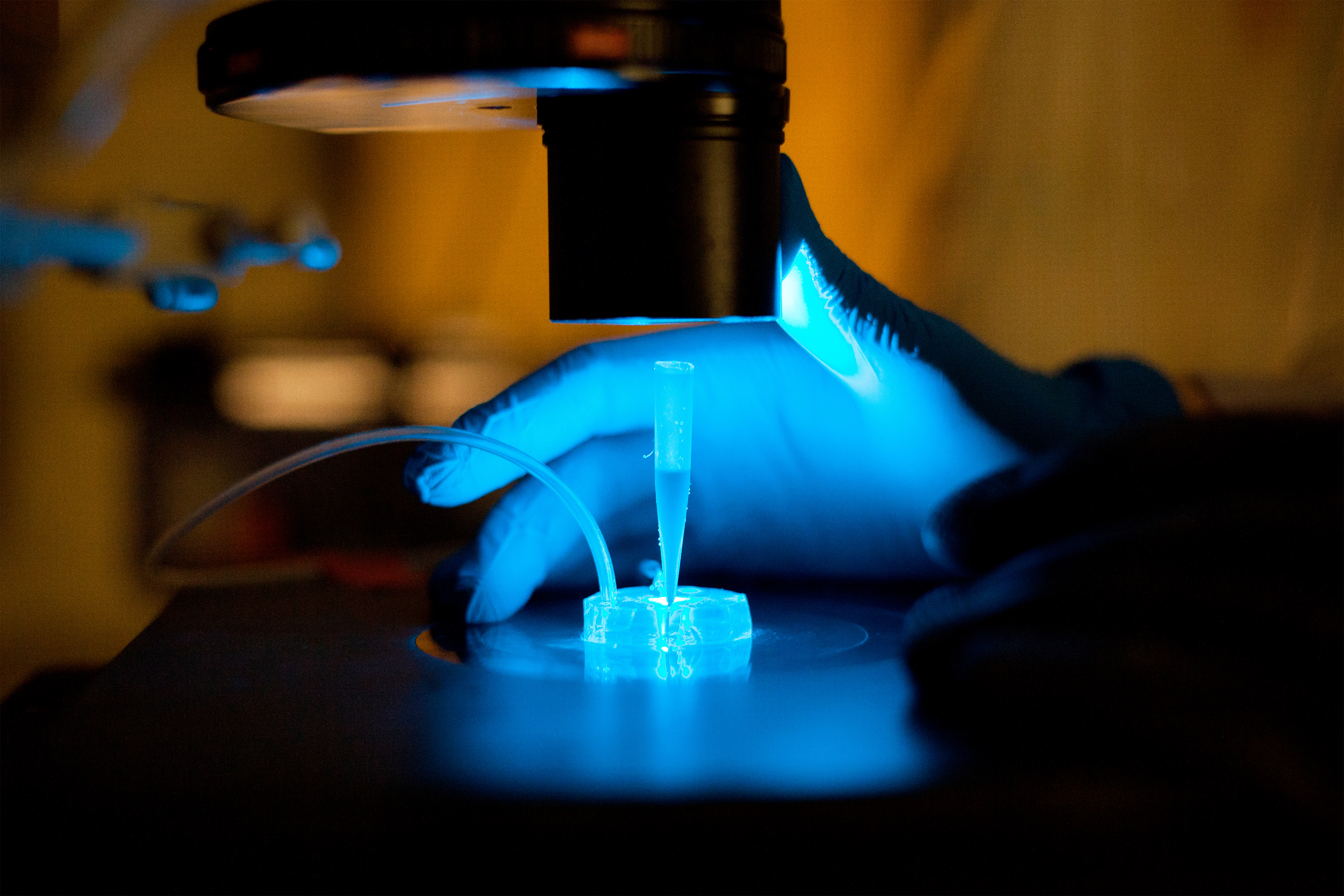 Katawut Namdee, BME Ph.D. student, performs tests with different forms of drug carriers as part of the research done in ChE Professor Omolola Eniola-Adefeso’s lab in the GG Brown Building on North Campus Ann Arbor, MI on December 17, 2012. Image credit: Joseph Xu, Michigan Engineering Communications & MarketingANN ARBOR—Many medically minded researchers are in hot pursuit of designs that will allow drug-carrying nanoparticles to navigate tissues and the interiors of cells, but University of Michigan engineers have discovered that these particles have another hurdle to overcome: escaping the bloodstream.

Drug delivery systems promise precision targeting of diseased tissue, meaning that medicines could be more effective at lower doses and with fewer side effects. Such an approach could treat plaques in arteries, which can lead to heart attacks or strokes.

Drug carriers would identify inflamed vessel walls and deliver a drug that removes the deposits of calcium, cholesterol and other substances. Or, the carriers might seek out markers of cancer and kill off the small blood vessels in tumors, starving the malignant tissue of food and oxygen.

Nanoparticles, which have diameters under one micron, or one-thousandth of a millimeter, are thought to be the most promising drug carriers. Omolola Eniola-Adefeso, U-M professor of chemical engineering who studies nanoparticles in flowing blood, says the immune system can’t get rid of them quickly.

“It’s hard for a white blood cell to understand it has a nanoparticle next to it,” she said.

Those same tiny dimensions allow them to slip through the cracks between cells and infiltrate cell membranes, where they can go to work administering medicine. But Eniola-Adefeso and her team found that these particles have an Achilles heel.

Blood vessels are the body’s highways, and once nanoparticles get into the flow, they find it very difficult to reach the exits. In all vessels other than capillaries, the red cells in flowing blood tend to come together in the center.

“The red blood cells sweep those particles that are less than one micron in diameter and sandwich them,” she said.

Trapped among the red cells, the nanoparticles can’t reach the vessel wall to treat disease in the blood vessels or the tissue beyond. 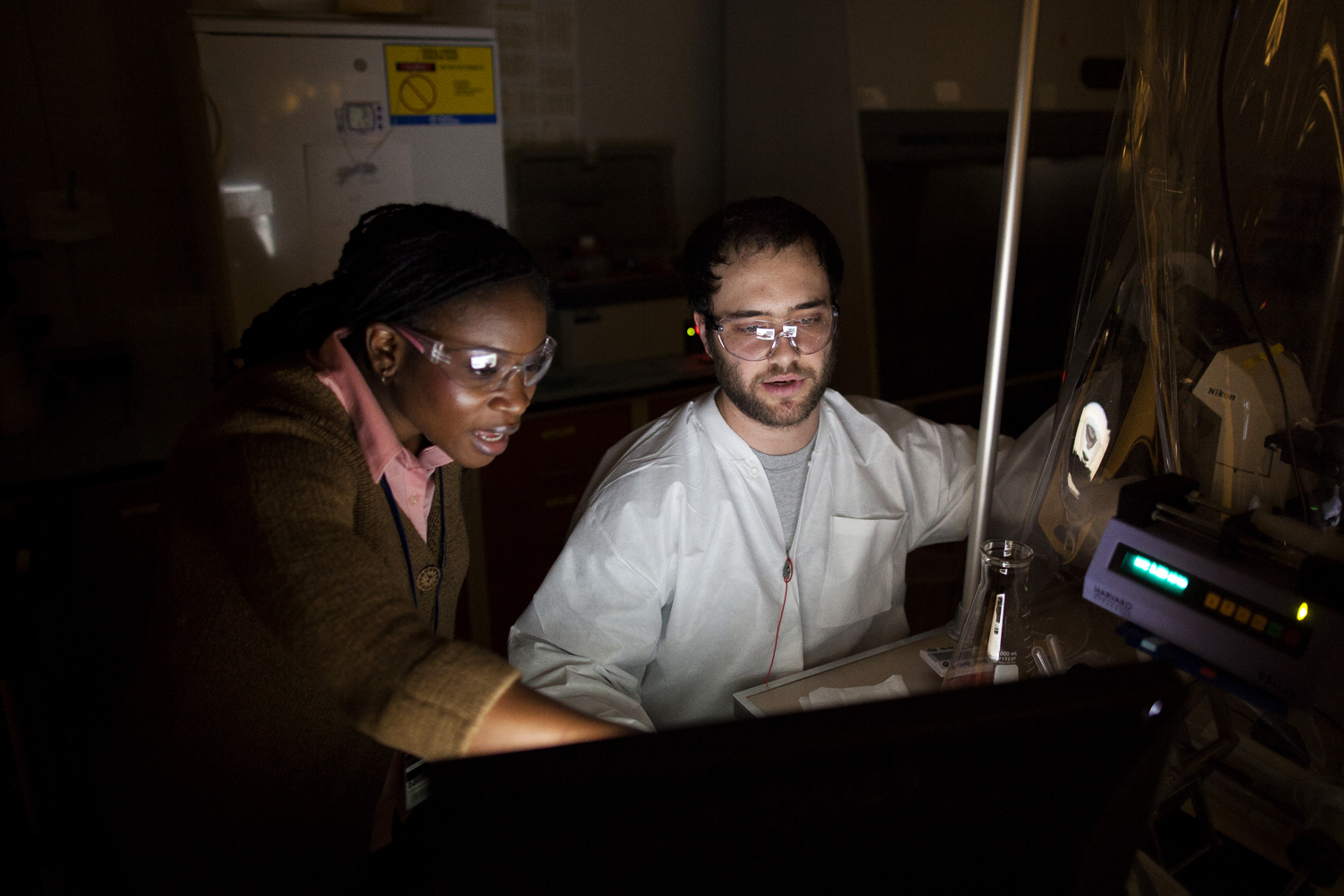 ChE Ph.D. student Alex Thompson and ChE Professor Omolola Eniola-Adefeso perform tests with different forms of drug carriers as part of Eniola-Adefeso’s lab group in the GG Brown Building on North Campus Ann Arbor, MI on December 17, 2012. Image credit: Joseph Xu, Michigan Engineering Communications & MarketingWith their recent work, including a study to be published recently in Langmuir, Eniola-Adefeso’s team has shown that nanoparticle spheres face this problem in tiny arterioles and venules—one step up from capillaries—all the way up to centimeter-sized arteries.

They discovered this with the help of plastic channels lined with the same cells that make up the interiors of blood vessels. Human blood, with added nano- or microspheres, ran through the channels, and the team observed whether or not the spheres migrated to the channel walls and bound themselves to the lining. The researchers present the first visual evidence that few nanospheres make it to the vessel wall in blood flow.

“Prior to the work that we have done, people were operating under the assumption that particles will interact with the blood vessel at some point,” Eniola-Adefeso said.

“If localized drug delivery is an important goal, then nanospheres will fail,” she said. 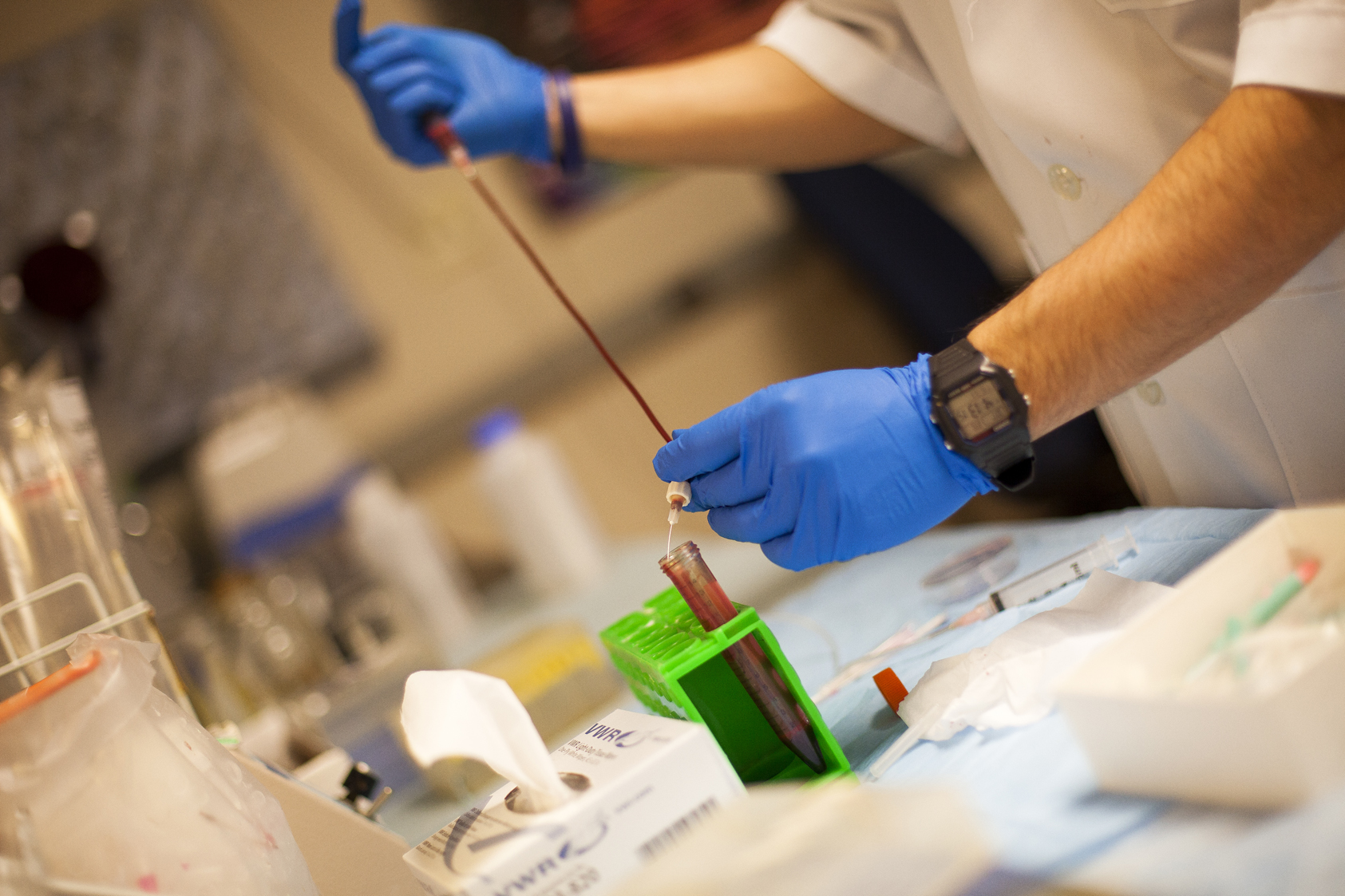 Katawut Namdee, BME Ph.D. student, performs tests with different forms of drug carriers as part of the research done in ChE Professor Omolola Eniola-Adefeso’s lab in the GG Brown Building on North Campus Ann Arbor, MI on December 17, 2012. Image credit: Joseph Xu, Michigan Engineering Communications & MarketingBut it’s not all bad news. The red blood cells tended to push microspheres with diameters of two microns or more toward the wall. Whether the blood flowed evenly, as it does in arterioles and venules, or in pulses, as occurs in arteries, the larger microspheres were able to reach the vessel wall and bind to it. When the team added more microspheres to the flow, they saw a proportional increase in microspheres on the vessel wall.

While microspheres are too large to serve as drug carriers into cell or tissue space on their own, the team suggested that microspheres could ferry nanospheres to the vessel wall, releasing them upon attachment. But the simpler approach may be nanoparticles of different shapes, which might escape the red blood cells on their own.

Eniola-Adefeso and her team are experimenting with rod-shaped nanoparticles.

“A sphere has no drift,” she said, so nanospheres won’t naturally move sideways out of the red cell flow. “When a rod is flowing, it drifts, and that drift moves it closer to the vessel wall.”

The newest paper titled “Margination Propensity of Vascular-Targeted Spheres from Blood Flow in a Microfluidic Model of Human Microvessels” is published online at http://pubs.acs.org/doi/abs/10.1021/la304746p. The work is funded by the American Heart Association and the National Science Foundation.