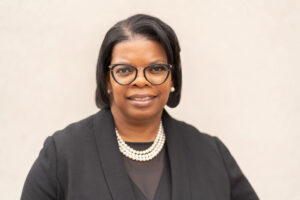 Adele Brumfield, an admissions and enrollment leader with deep experience at several institutions, has been named the University of Michigan’s vice provost for enrollment management, effective Aug. 2.

She is currently the associate vice chancellor for enrollment management at the University of California San Diego.

Brumfield’s appointment was approved May 20 by the Board of Regents. She follows U-M Registrar Paul Robinson who has served in the role on an interim basis since July 2020 when Kedra Ishop left U-M for the University of Southern California.

“Ms. Brumfield brings a principled, thoughtful and analytical approach to enrollment management. She is an innovative, collaborative and effective leader with extensive experience in higher education,” said Susan Collins, U-M provost and executive vice president for academic affairs. “Her commitment to and track record of success in increasing access and equity in enrollment and financial support will bolster the university’s work on diversity, equity and inclusion.”

As vice provost for enrollment management at U-M, Brumfield will be responsible for providing administrative and financial leadership for the Office of Enrollment Management that oversees undergraduate admissions, financial aid, the university registrar and new student programs.

She will oversee a core leadership team of 11 as well as a staff of more than 190 full-time employees and an operating budget of more than $20 million.

“I am thrilled to join the University of Michigan, an institution I have long admired,” Brumfield said. “It will be an honor to lead the Office of Enrollment Management and I am excited to return to my Midwestern roots and the Big Ten.”

Since 2016, she has worked as the associate vice chancellor for enrollment management at the University of California San Diego. Brumfield is the chief undergraduate enrollment strategist, and currently leads nine direct reports and 150 full-time staff in administrative units ranging from undergraduate admissions, financial aid and scholarships, and the office of the registrar to units that cover college access, marketing, business operations, enrollment management technology and enrollment analytics.

Among her achievements at UC San Diego has been building awareness of and affinity with the university among diverse and highly accomplished prospective students resulting in record-breaking application numbers. Since 2016, first-year and transfer applications have increased 37% and for fall 2021 topped more than 140,000.

Significant gains were made in attracting and enrolling historically underrepresented students while working within California Proposition 209, which prohibits public institutions from using race, sex or ethnicity in admissions or financial aid.

Brumfield served on the TOEFL (Test of English as a Foreign Language) board and for two years guided the group as the chair. She has shared U.S. higher education opportunities abroad through the College Board’s Overseas Schools Project funded by the U.S. Department of State’s Office of Overseas Schools, where she also is an advisory committee member.