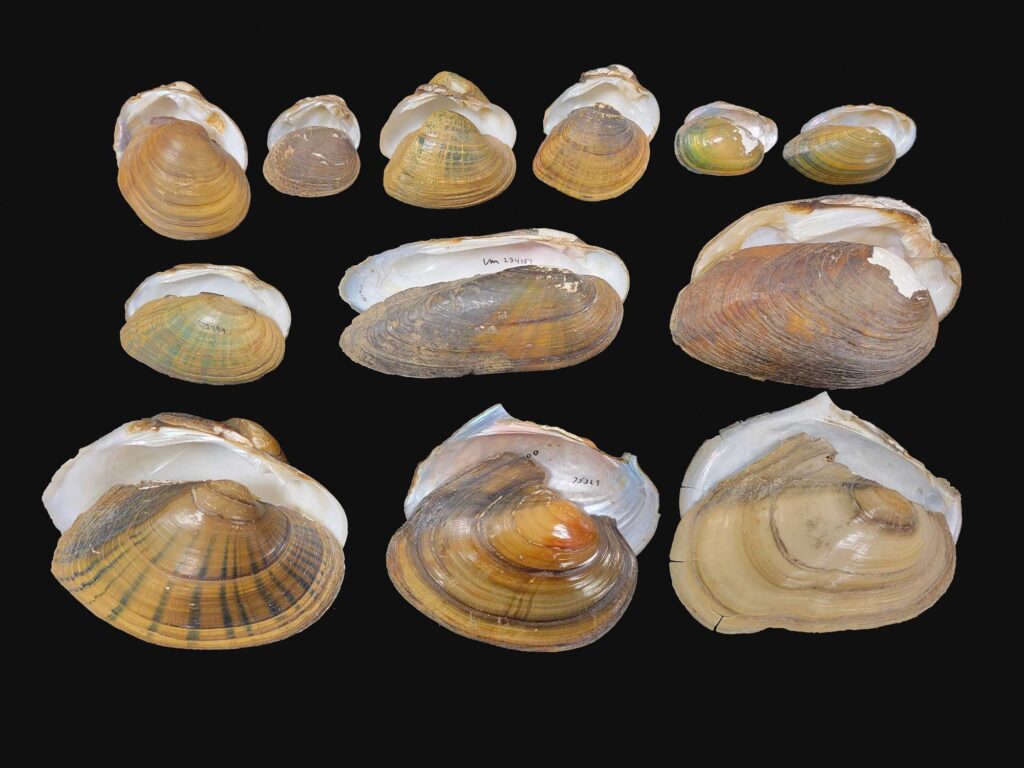 Shell specimens from 12 of the 54 lampsiline freshwater mussel species analyzed in the University of Michigan study. These specimens were collected from various U.S. rivers and streams during the 20th century and are now part of the U-M Museum of Zoology mollusk collection. Image credit: Taehwan Lee, U-M Museum of Zoology

North America’s freshwater mussels are both impressively diverse and highly imperiled. Nearly 300 species occur in the United States and Canada, and up to 40 species of the hard-shelled bottom dwellers can be found on a single stretch of a clean, swiftly flowing river.

Freshwater mussels are also a paradoxical group: How can so many species persist side by side while feeding on the same foods—sediments, plankton and other particles in the water column? Elsewhere in nature, a few species would typically gain an advantage over the others and would eventually outcompete them.

A new genetic analysis of North American freshwater mussels by University of Michigan biologists concludes that a key to understanding the coexistence of many freshwater mussel species lies with the distinctive ecology of their microscopic, short-lived larvae, rather than the long-lived adults.

Female freshwater mussels in the tribe Lampsilini have evolved a mind-bending array of lures that use mimicry to attract nearby fish and to “infect” them with mussel larvae, which then metamorphose on the fish’s gills or fins before dropping to the river bottom, weeks later, as juvenile mussels. In biology, a tribe is a taxonomic rank above genus but below family and subfamily. 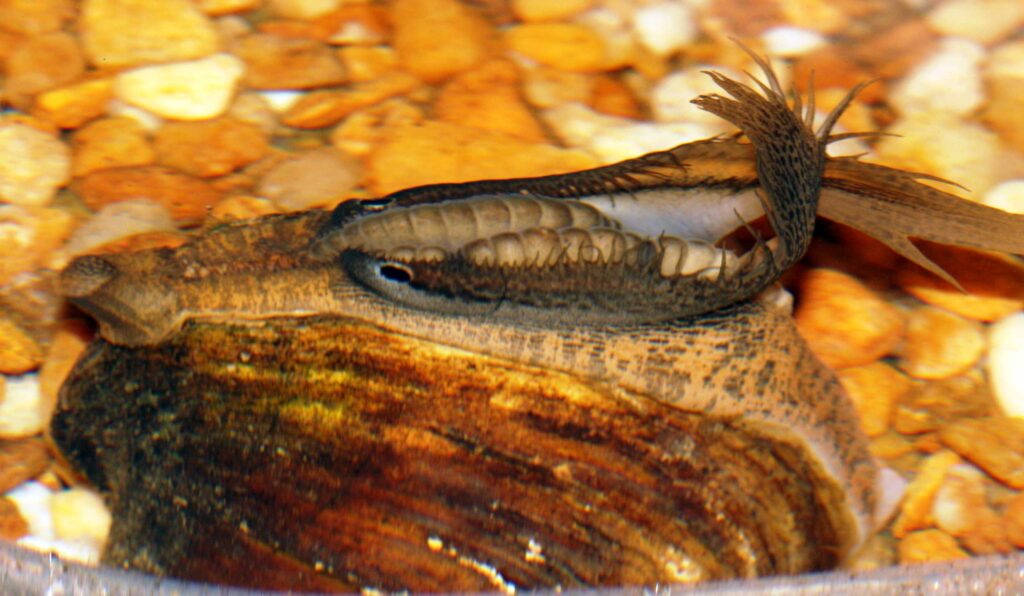 The larvae of each lampsiline mussel species must infect a specific type of freshwater fish—bass, sunfish, darters, sculpins or drum, for example—to complete their development. In the language of ecology, the mussel larvae are obligate parasites, and the fish that shelter and disperse them are their hosts.

It is this competition for host fishes that best explains the coexistence of multiple lampsiline species, according to the authors of a paper published online Nov. 16 in the journal PeerJ.

The high diversity of available fishes and the ability of mussel species to target specific fish hosts has led, over time, to specialized host-infection behaviors and the evolution of new species through a process called adaptive radiation, according to the U-M researchers.

“This study provides an exciting new paradigm for how much of North America’s rich, but highly endangered, freshwater mussel fauna has evolved, and it highlights the cryptic role their remarkably complicated and interesting larval life histories has played in that process,” said study senior author Diarmaid O’Foighil, a professor in the U-M Department of Ecology and Evolutionary Biology and a curator at the Museum of Zoology. The study’s lead author is U-M doctoral candidate Trevor Hewitt, who did the work for his EEB dissertation.

An adaptive radiation is a burst of evolution that takes advantage of ecological opportunity to create several new species from a single parent species.

Adaptive radiations are widespread in nature and often involve a population of a given species that moves into new habitats. Individuals stake out specific roles, or niches, in those habitats and gradually become different from the parent species and from each other.

But in all those cases, the focus is on adult organisms and their adaptations to different habitats and new ways of life. The freshwater mussel study is one of the first to identify an adaptive radiation centered on the ecological niches of an organism’s larval stage, according to Hewitt.

“To our knowledge, this is also the first time that this prominent model of speciation—adaptive radiation—has been proposed for a freshwater mussel lineage,” Hewitt said. “In addition, we constructed the first genomic lampsiline phylogeny in order to place the diversity of host use, and host infection strategies, into a robust evolutionary context.”

The study involved collecting tissue samples from 54 lampsiline mussel species in the field (using a nonlethal biopsy technique) and from specimens in museum collections. Genomic DNA was extracted from the tissue samples, then sequenced. The genetic information was then used to construct a lampsiline mussel family tree, which biologists call a phylogeny.

Lampsiline mussels were picked for the study because of their high species diversity, the availability of extensive background information about host-fish specificity and—most importantly—because lampsilines are predominantly specialist parasites.

The information about modern-day lampsilines, when combined with insights about evolutionary relationships preserved in their DNA, enabled the researchers to test the prediction that the mussels’ fish-targeting preferences, if maintained over long timescales, would lead to adaptive radiations centered on their larval stage and characterized by the evolution of specialized host-infection behaviors. 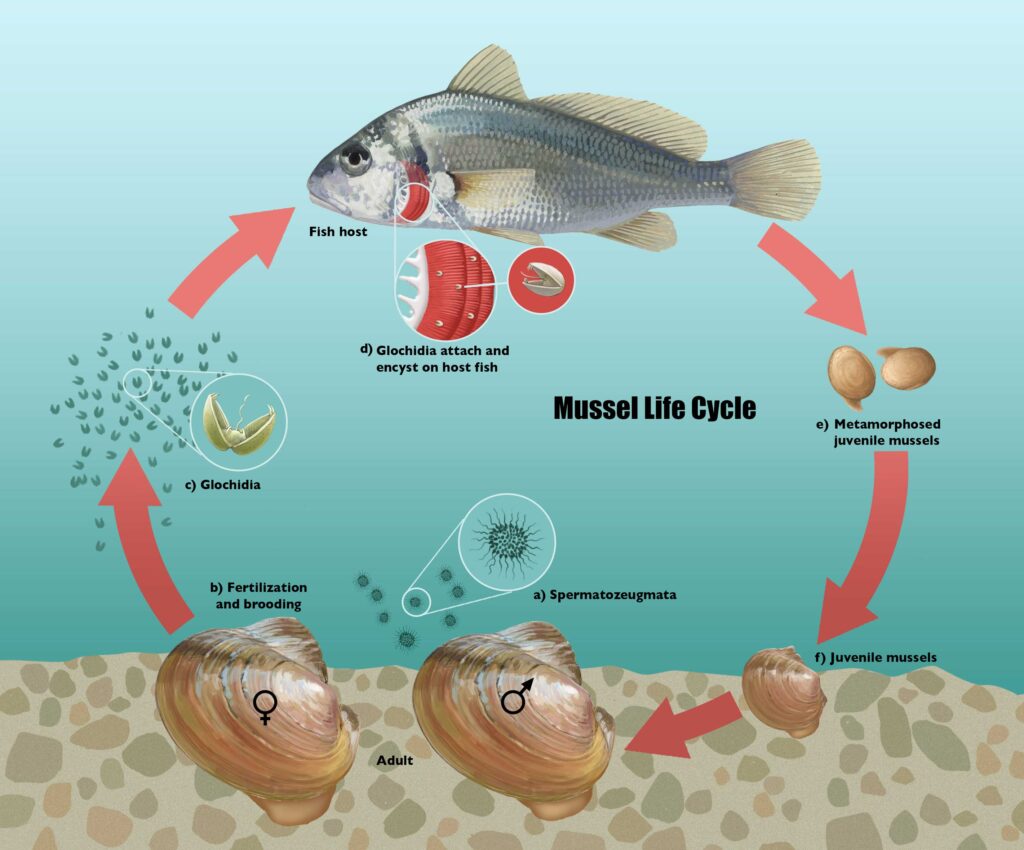 The results supported that hypothesis and were consistent with the idea that lampsiline mussels can legitimately be viewed as an example of an adaptive radiation. 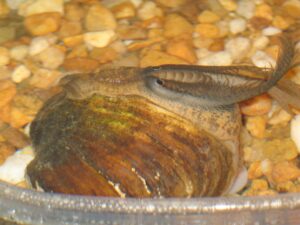 Some females wave a fleshy appendage called a mantle lure that resembles a minnow, a crayfish, a worm or some other small creature that a larger fish might want to devour. When the predator fish takes a bite, it gets a mouthful of parasitic mussel larvae instead of an easy meal.

Other lampsiline mussels rely on a brood lure: Pregnant females produce a gelatinous, larvae-filled mass shaped like an insect, a small fish or other prey item, then release it to drift freely in the water. And others reproduce without lures and simply release their larvae into the water, a method called broadcast release.

Nearly 70% of U.S. freshwater mussel species are in serious trouble, due to multiple factors that include water pollution, the damming of rivers and competition from nonnative species. Parasitic larval development makes these mussels even more vulnerable, because their continued existence is tied to the health of the host fish.

U.S. wildlife officials recently declared that 22 animals and one plant species are likely extinct and should be removed from the endangered species list. Eight of the 23 species are freshwater mussels, and six of the eight are lampsilines.