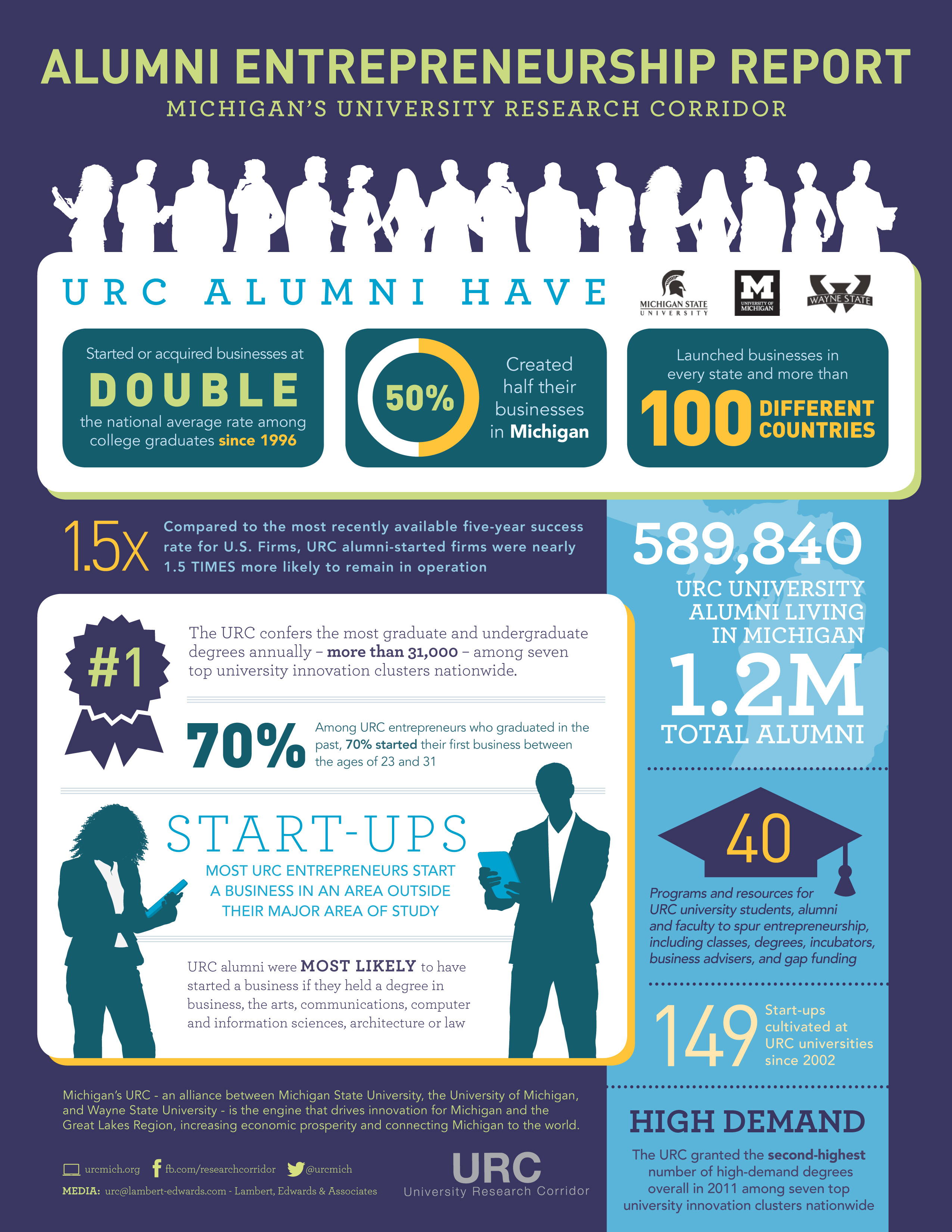 2013 Entreprenuership infographic.MACKINAC ISLAND, Mich.—Michigan’s University Research Corridor (URC) is proving to be a powerful business incubator for students and alumni, playing a dramatically increased role in nurturing start-up efforts and providing a boost to aspiring entrepreneurs, a new report shows.

Graduates of the three universities that make up the URC – Michigan State University, the University of Michigan and Wayne State University — have started or acquired businesses at double the national average rate among college graduates since 1996. URC alumni were 1.5 times as successful as the average U.S. business owner at keeping those start-ups and acquisitions alive in the past five years, according to the Embracing Entrepreneurship report released today at the Detroit Regional Chamber’s Mackinac Policy Conference.

The survey included responses from more than 40,000 of the three schools’ 1.2 million alumni. The responses revealed that more than 19 percent of the URC alumni surveyed have started a company, and some have created more than one.

That entrepreneurial activity reached to every state and more than 100 countries, with nearly half the new enterprises started or acquired in Michigan. URC alumni are making an impact far and wide, as can be seen by the careers of venture capitalist and University of Michigan graduate Peter Farner in Kalamazoo, Mich., Michigan State University graduate Nzimiro Oputa and his New York City fashion design business, and Howard Birndorf, a Wayne State University graduate who started a biotechnology company in California that he eventually sold to Eli Lilly and Co.

The report was prepared by East Lansing, Mich.-based Anderson Economic Group (AEG) using alumni survey data collected by Survey Sciences Group LLC (SSG). It showed that URC alumni were more likely to have started a business if they held a degree in business, the arts, communications, computer and information sciences, architecture or law. Most URC entrepreneurs started a business in an area outside their major area of study, suggesting that the URC universities are preparing graduates with a broad base of skills useful in launching a business. 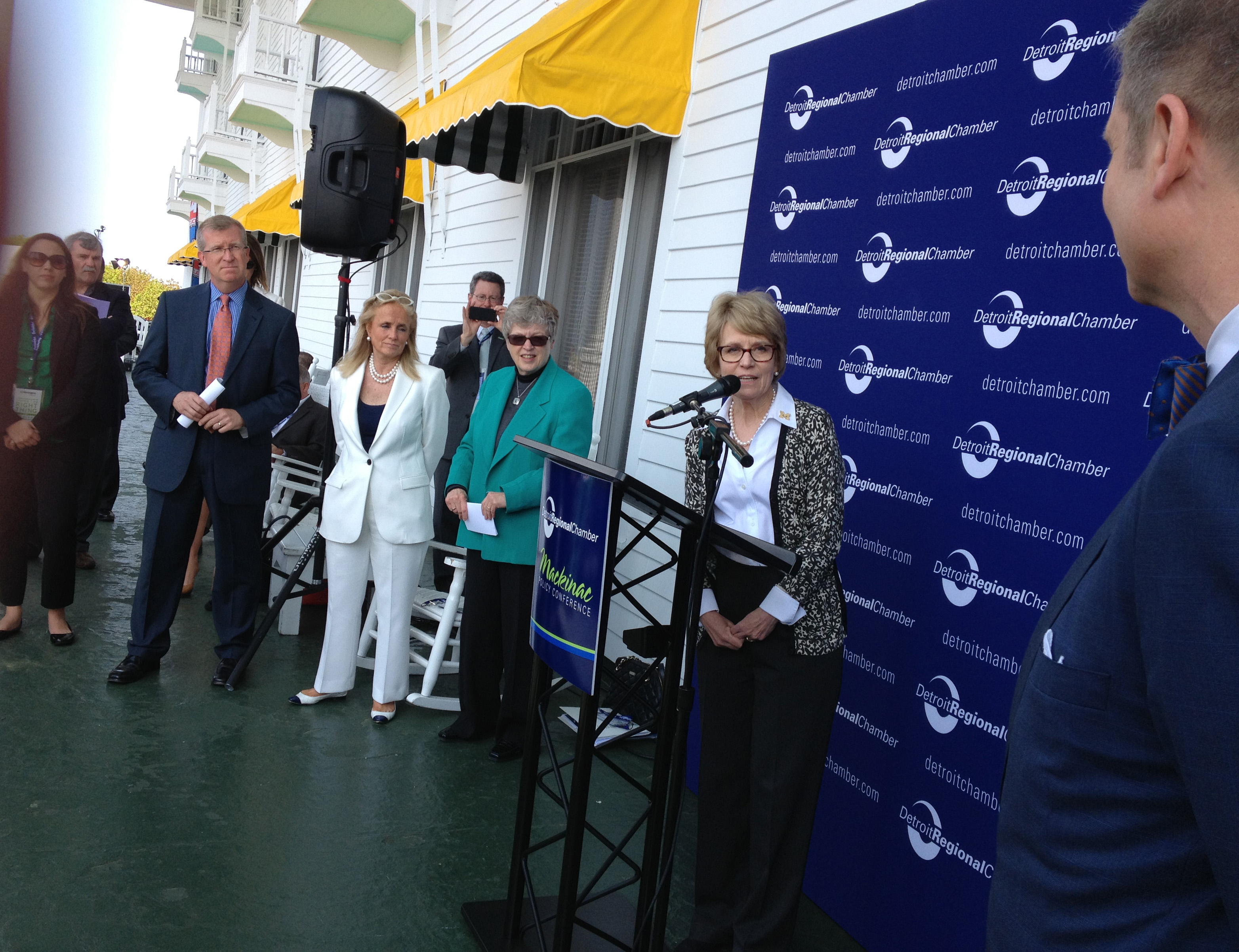 At news conference on porch of The Grand Hotel. (Left to right) Jeff Mason, Debbie Dingell, MSU president Lou Anna Simon, Mary Sue Coleman, and Patrick Anderson. Image credit: John Russell, URC“We often think entrepreneurs are people with an engineering or scientific background, but the survey shows that Michigan’s entrepreneurs come from many fields of study,” said University of Michigan President Mary Sue Coleman. “In many cases, you’re just as likely to start a business if you studied architecture or the arts.”

The three URC universities have revamped their curriculum in recent years and taken other steps to encourage an entrepreneurial spirit in their students and graduates. They now offer more than 40 programs and resources for students, alumni and faculty, including classes and degrees in entrepreneurship, business incubators, special advisers and gap funding to help start-ups get off the ground.

“Every year the URC institutions are graduating more than 30,000 students. The study suggests that a significant number of these alumni are starting their own businesses, and more than 50 percent of those businesses are here in Michigan, contributing to our state’s economic prosperity,” said URC executive director Jeff Mason. “The URC is committed to supplying the tools that can lead to new companies and more jobs.”

That increased effort is one reason 70 percent of URC alumni entrepreneurs who graduated in the past decade are starting their businesses at an earlier age–between 23 and 31 years old, the survey showed, although alumni of every age are involved in entrepreneurial activity. Some, such as southeast Michigan Emagine Entertainment founder and Wayne State graduate Paul Glantz, started their own business as a hedge in an uncertain economy. Baby Einstein founder Julie Aigner Clark drew on her Michigan State University education degree to offer parents educational videos once she became a stay-at-home mom. Kalyan Handique started Handylabs while a graduate student, taking advantage of entrepreneur programs at the University of Michigan. 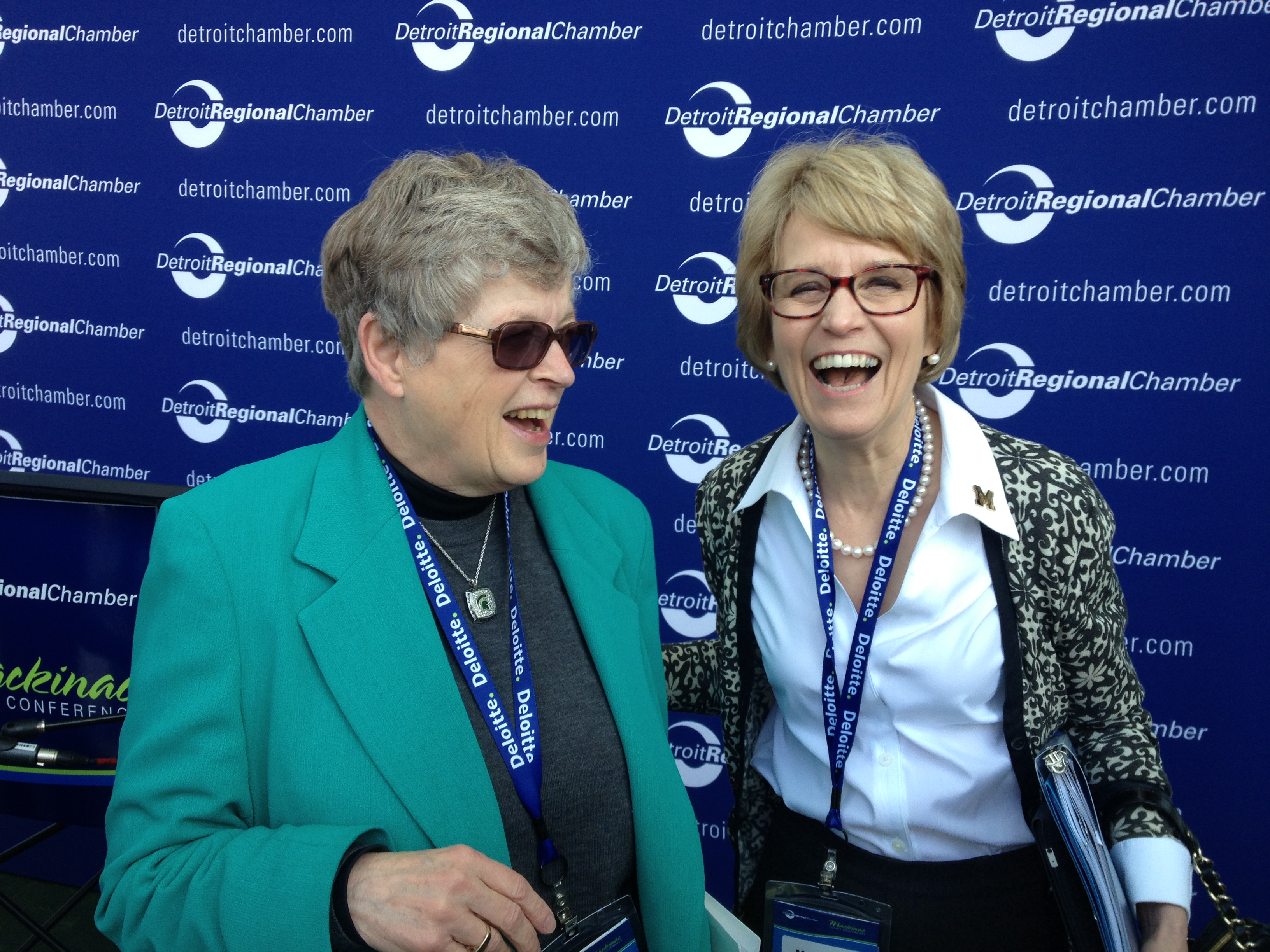 MSU president Lou Anna Simon with Mary Sue Coleman at the 2013 Mackinac Policy Conference.Image credit: John Russell, URCMichigan State University President Lou Anna K. Simon pointed out that the three URC universities conferred the most graduate and undergraduate degrees and the second-highest number of high-demand degrees among seven university innovation clusters nationwide in 2011. “Michigan’s three premier research universities are doing more every year to promote an entrepreneurial mindset while helping Michigan’s businesses grow by providing the talent they need,” she said. “By focusing on entrepreneurship at all three universities, we’re creating a deep pool of talented graduates who can help start-up companies succeed.”

A total of 589,840 URC alumni live in Michigan. Some bring their talents to businesses statewide, while others tap their talents to start their own enterprises. “The three URC universities see themselves as the leading engine for innovation in Michigan and the Great Lakes region, with a focus on increasing economic prosperity and connecting Michigan to the world,” said Wayne State University President Allan Gilmour. “Our coordinated efforts should encourage even more entrepreneurs and start-ups in the future.”

At the behest of the URC, Anderson Economic Group studied the contributions URC alumni entrepreneurs have made, their economic footprint, and the steps that the three universities have taken to encourage entrepreneurship. Surveys went to nearly half a million living alumni, and more than 40,000 responded.

“The careful steps taken by our research team, the URC and other partners, accompanied by the very large number of responses, mean we can be confident in the findings,” said Patrick Anderson, principal and founder of AEG, and a URC alumnus. “Companies of the future are being started by URC graduates, and this study shows that the universities are preparing students in Michigan to take on roles as business owners.”

One of U-M’s top priorities is to help society reap the benefits of its $1 billion research portfolio through a rich variety of programs in tech transfer, entrepreneurship education, venture creation and business engagement that spur innovation and economic development throughout the region and beyond. Learn more at innovationeconomy.umich.edu