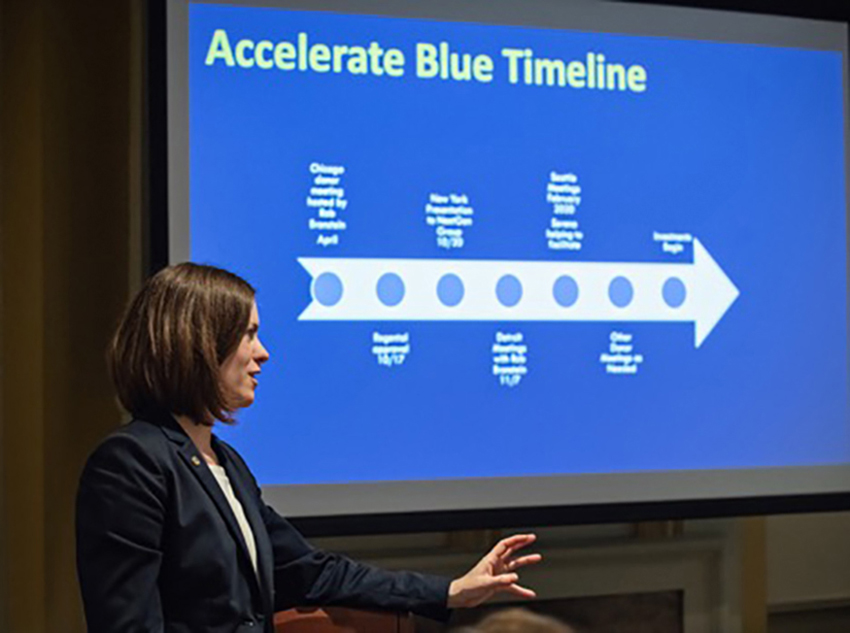 Amazon is contributing $200,000 to the Accelerate Blue Fund, a University of Michigan philanthropic venture fund—representing the first corporate gift received by the fund that aims to help develop and commercialize promising U-M technologies.

The donation brings Accelerate Blue nearly to the halfway point of its initial goal of $2 million. By the end of the year, officials expect to start evaluating potential investments in U-M technology-based startups. Accelerate Blue is an evergreen source of early-stage, risk-tolerant, high-impact capital for U-M high-tech startups. All investment returns will go back into the fund for future investment in new U-M startups.

With the gift, Amazon becomes the first corporate member of the Accelerate Blue Founders’ Circle. Other Founders Circle members include Rob Bronstein, a U-M alumnus and president of The Scion Group, as well as Don Sweeney, also a U-M alumnus and CEO of Ashling Partners, and his wife, Erica.

The fund, approved by the Regents of the University of Michigan in October, plans to make initial investments of between $25,000 and $250,000 in startups in areas such as cybersecurity, legal tech, mobility, artificial intelligence, mobility and sports, and climate technology. Accelerate Blue’s aim is to support the attraction of business leadership, speed U-M startups to commercial success and shorten the gap to securing additional venture capital.

Analysis of funding data shows that Midwest startups take nearly two years longer to secure their first $500,000 on investment capital than similar companies on the East and West coasts. Accelerate Blue will help U-M startup companies overcome this early-stage investment gap, allowing them to grow, scale and contribute to the diversification of the region’s economy.

“The support from Amazon is significant because it demonstrates the interest of corporations in learning more about the incredible high-tech startup companies spinning out of U-M’s research enterprise,” said Kelly Sexton, U-M’s associate vice president for research, technology transfer and innovation partnerships. “In light of the economic uncertainty created by the COVID-19 pandemic, the Accelerate Blue Fund will be more important now than ever before in order to ensure that U-M’s startups have the opportunity to change the world and drive economic growth.”

The pace of innovation continues at U-M, with a record-breaking 28 new startups launched in fiscal year 2020.

Pointing to recent Ann Arbor-based technology startups coming out of U-M, like Voxel51, Censys and Memryx, Psarouthakis said, “We have a real opportunity to get impactful technologies into the world, diversifying our state’s economy in the process. And, with these additional early-stage funds, we know that we’re going to increase the likelihood that more companies can remain in Michigan and thrive here.”