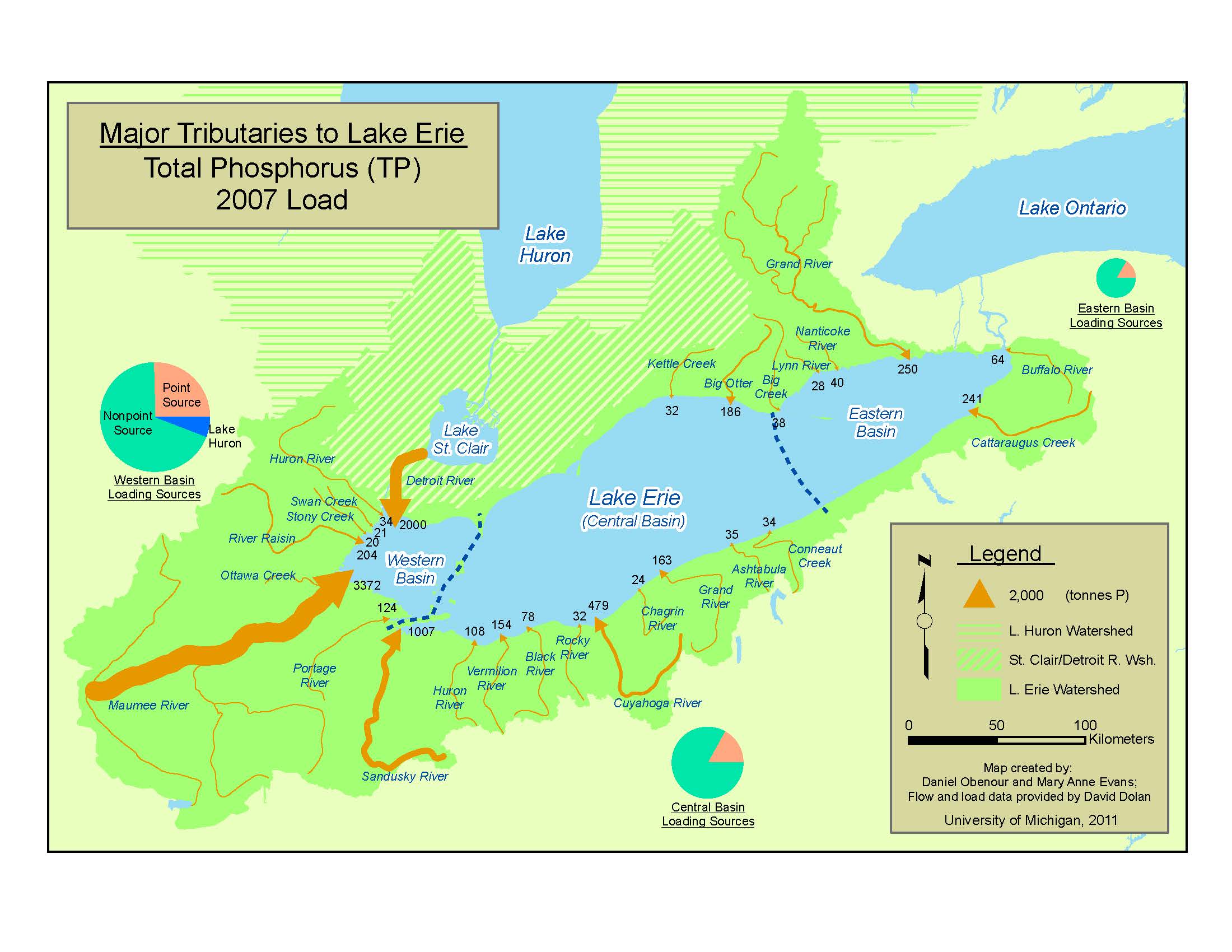 Map showing major tributaries of Lake Erie. Image credit: Daniel Obenour and Mary Anne EvansANN ARBOR—Reducing the size of the Lake Erie “dead zone” to acceptable levels will require cutting nutrient pollution nearly in half in coming decades, at a time when climate change is expected to make such reductions more difficult.

That’s one of the main conclusions of a comprehensive new study that documents recent trends in Lake Erie’s health. It offers science-based guidance to policymakers seeking to reduce the size of toxic algae blooms and oxygen-starved regions called hypoxic zones, or dead zones—two related water-quality problems that have seen a resurgence in the lake since the mid-1990s.

The report from the multi-institution EcoFore-Lake Erie project states that a 46 percent reduction in the amount, or load, of phosphorus pollution would be needed to shrink Lake Erie’s Central Basin hypoxic zone to a size last seen in the mid-1990s—a time that coincided with the recovery of several recreational and commercial fisheries in the lake’s west and central basins. 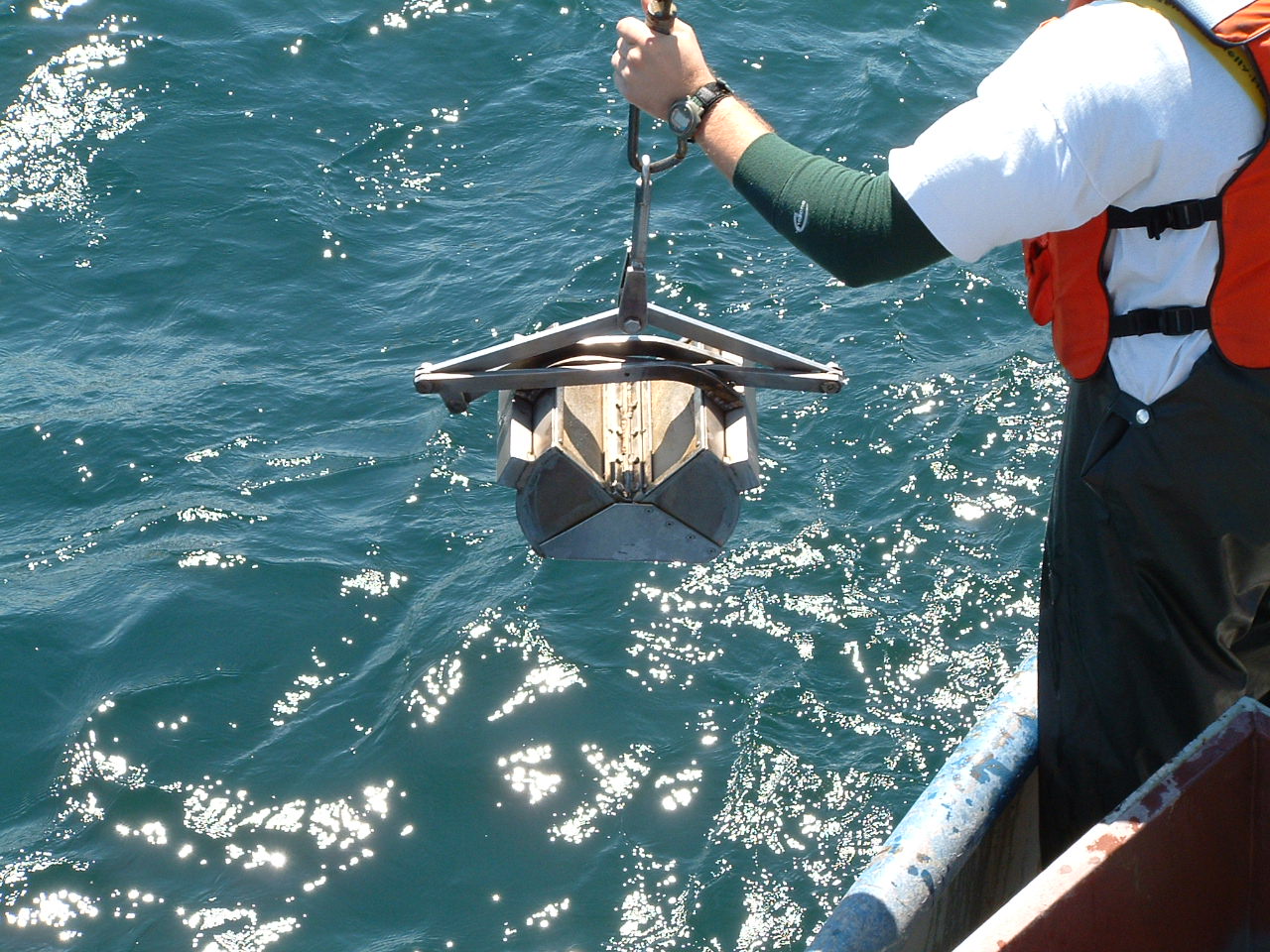 A sampling device called a Ponar Grab is lowered in Lake Erie’s Central Basin to collect bottom-dwelling invertebrates. The work was part of a study examining the impacts of low-oxygen hypoxic zones in the lake. Image credit: James RobertsPhosphorus is a nutrient used in crop fertilizers. Excess phosphorus washes off croplands during rainstorms and flows downstream in rivers that feed the Great Lakes. Once in the lakes, phosphorus can trigger algae blooms. When the algae die and sink to the lake bottom, oxygen-consuming bacteria feed on them and create hypoxic zones in the process. Many fish shun these oxygen-starved waters, which significantly reduce the amount of suitable habitat available to the fish.

The study, published online Feb. 26 in the Journal of Great Lakes Research, calls for Central Basin phosphorus reductions considerably higher than other recent recommendations, including a proposal issued last year by the Ohio Lake Erie Phosphorus Task Force aimed at avoiding Western Basin toxic algae blooms. The new report is a synthesis of the major findings from the EcoFore-Lake Erie project, created in 2005 and supported by the U.S. National Oceanic and Atmospheric Administration’s Center for Sponsored Coastal Ocean Research.

“The new target is very ambitious but is achievable if the region agrees to adopt agricultural practices that help reduce the amount of phosphorus-bearing fertilizer washing off fields,” said aquatic ecologist Donald Scavia, director of the University of Michigan’s Graham Sustainability Institute and EcoFore-Lake Erie principal investigator. “We believe this EcoFore synthesis report provides important input to the U.S. and Canadian teams charged with setting new phosphorus load targets for Lake Erie.” 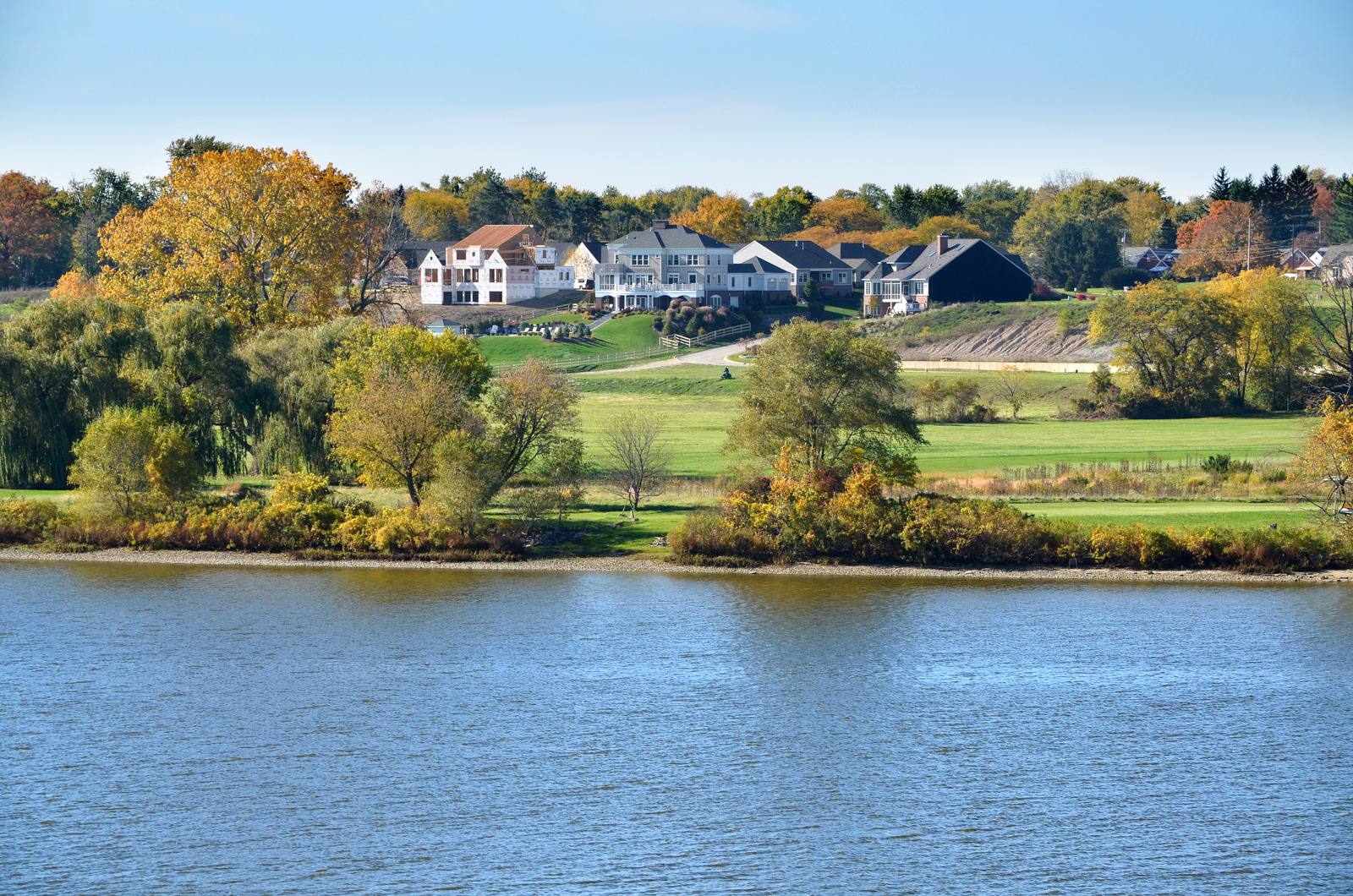 The Maumee River in Perrysburg, Ohio. Image credit: Michigan Sea GrantThe EcoFore recommendations are aimed at policymakers who will update the binational Great Lakes Water Quality Agreement. A 2012 protocol amending the 1972 agreement commits the United States and Canada to revising phosphorus targets for open waters and near-shore areas of each Great Lake and taking actions to reduce phosphorus levels that contribute to harmful algae.

Lake Erie, once declared dead and then recovered, began showing signs of distress again in the mid-1990s, with large algae blooms and dead zones becoming more common. EcoFore-Lake Erie scientists created, tested and applied computer models to forecast how nutrient pollution and climate change are likely to influence the formation and growth of hypoxia in Lake Erie’s largest basin, the Central Basin.

They also assessed the likely ecological impacts with an emphasis on fish production, because Central Basin hypoxia has a high potential to harm valued Lake Erie fisheries.

The researchers found that while the total amount of phosphorus washing into Lake Erie from several key watersheds (including the Maumee and Sandusky rivers) has been nearly constant since the mid-1990s, the percentage of a special type of phosphorus called dissolved reactive phosphorus, or DRP, more than doubled from 11 percent to 24 percent during that time.

“DRP is extremely bioavailable to algae, meaning the algae can readily absorb this nutrient and use it to fuel explosive growth,” said EcoFore team member Joseph DePinto of LimnoTech in Ann Arbor. 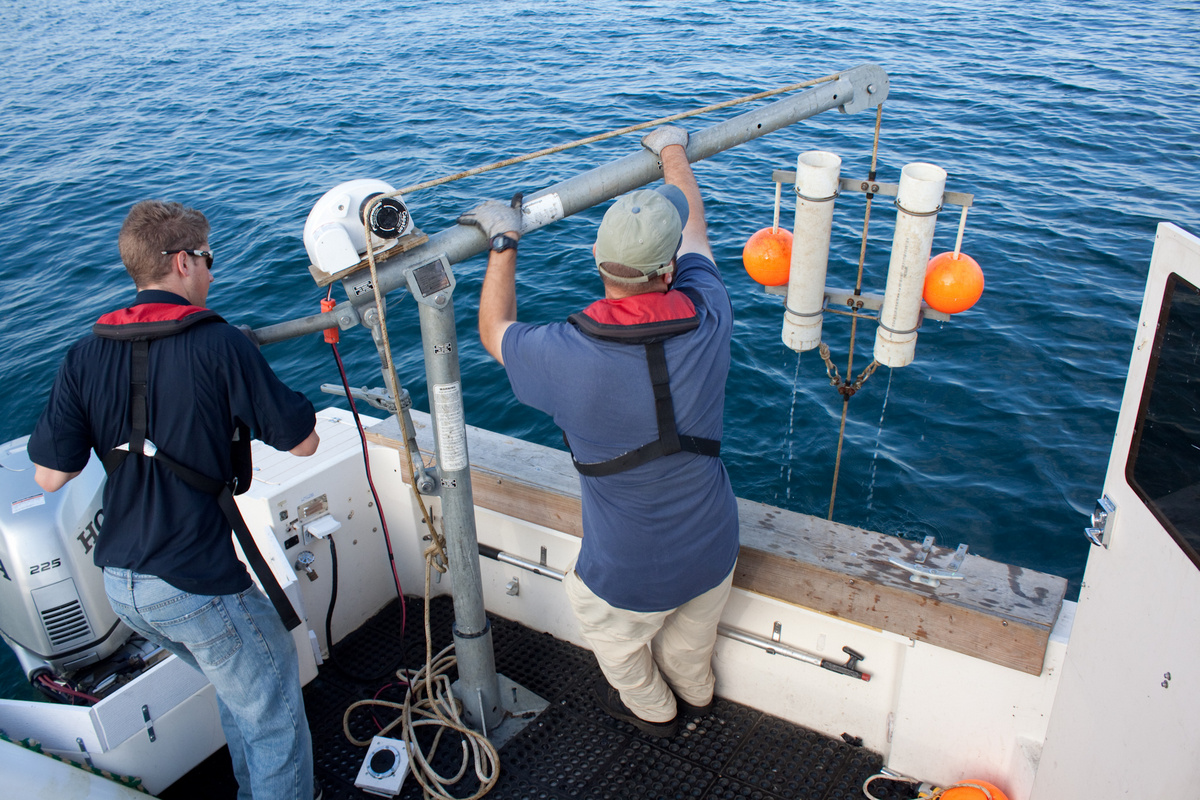 Researchers release a bottom-trawling net into Lake Erie to catch fish, part of a study examining the impacts of lake-bottom hypoxia. Image credit: James RobertsChanges in farming practices in the region since the mid-1990s and an increased frequency of severe spring rainstorms likely worked together to boost the levels of DRP entering Lake Erie, according to the EcoFore researchers. Practices such as fall fertilizer broadcast application and no-till farming tend to leave lots of phosphorus in surface soils, where heavy rains can wash it away.

The observed precipitation trends are expected to continue in the coming decades. At the same time, Lake Erie’s problems will be compounded by warming lake temperatures, the EcoFore scientists concluded. To explore various phosphorus-runoff scenarios, team members used previously published climate models that project spring precipitation increases in the region of 11 and 29 percent by the end of the century, along with summer temperature increases of 7.2 and 12.6 degrees Fahrenheit.

As Lake Erie warms, its fish will likely feel the squeeze from above and below.

“Climate warming can cause preferred habitat to be squeezed both from above by warmer temperatures and from below via increased hypoxia,” said EcoFore team member Tomas Höök of Purdue University.

In fact, warming water temperatures “may have a stronger effect on fish habitat quality than nutrient loading,” the EcoFore report states. “Under a warmer climate, we may need to reduce (phosphorus) loading levels even more dramatically to have meaningful positive effects on habitat quality and Lake Erie fish stocks.” 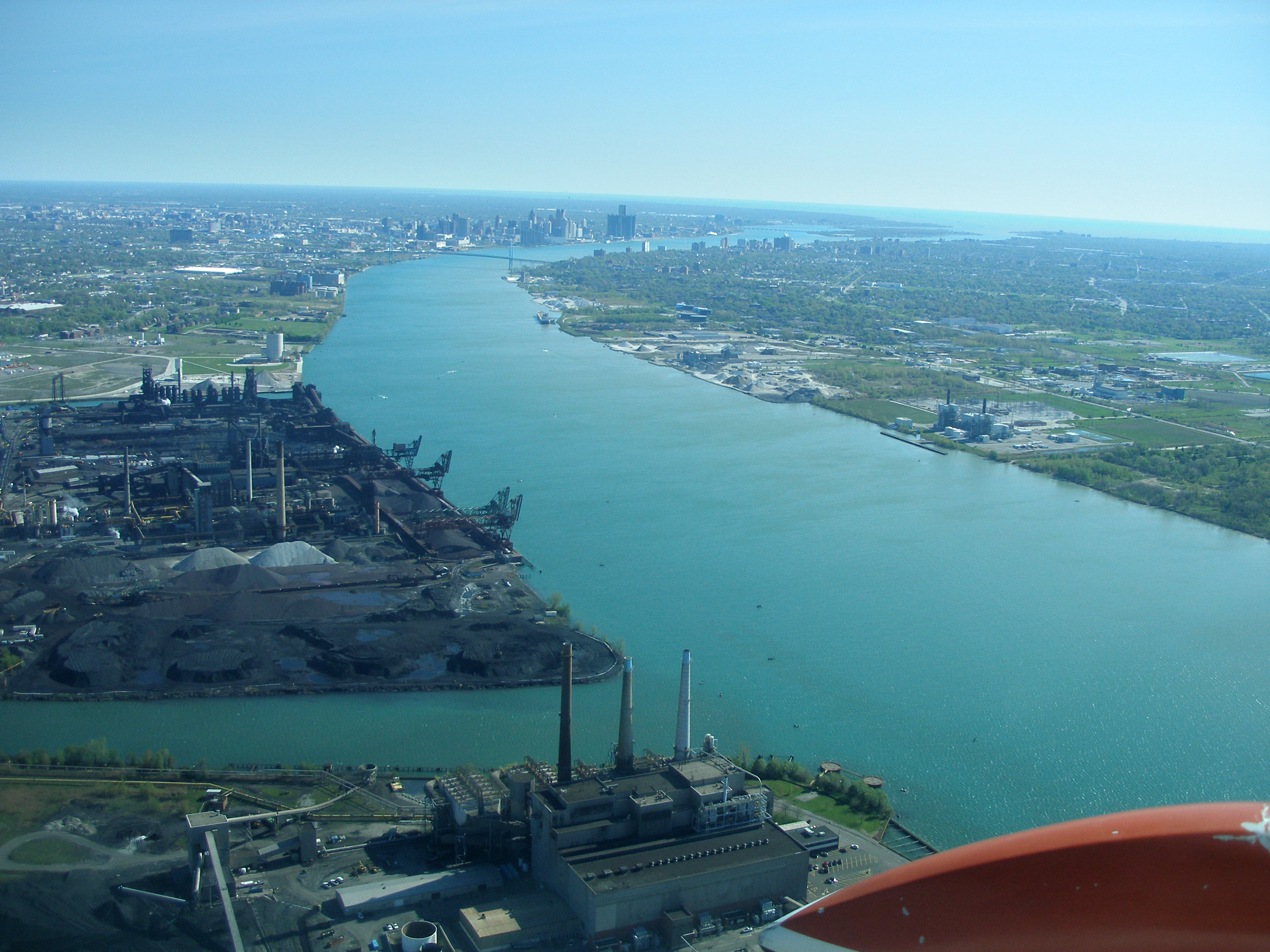 The Detroit River, looking upstream from the mouth of River Rouge toward downtown Detroit. Image credit: Michigan Sea GrantThe EcoFore team recommends that policymakers set separate targets for reducing both total phosphorus and DRP loading to Lake Erie. A 78 percent reduction in DRP annual load would be needed to reach a Central Basin hypoxia goal of 780 square miles. That’s an area larger than Los Angeles and is roughly the size of the Central Basin dead zone that existed in the early 1990s.

Nutrient-reduction efforts, in the form of agricultural best management practices, should focus on the sites within watersheds that release the most phosphorus into rivers, according to the researchers.

The report’s U-M authors are from the Graham Sustainability Institute, School of Natural Resources and Environment, Cooperative Institute for Limnology and Ecosystems Research, Water Center and Department of Civil and Environmental Engineering.

Funding for the project was provided by NOAA, the National Science Foundation and a Federal Aid in Sport Fish Restoration grant from the U.S. Fish and Wildlife Service and the Ohio Division of Wildlife. The title of the paper is “Assessing and addressing the re-eutrophication of Lake Erie: Central Basin Hypoxia.”