An older Vega: New insights about the star all others are measured by 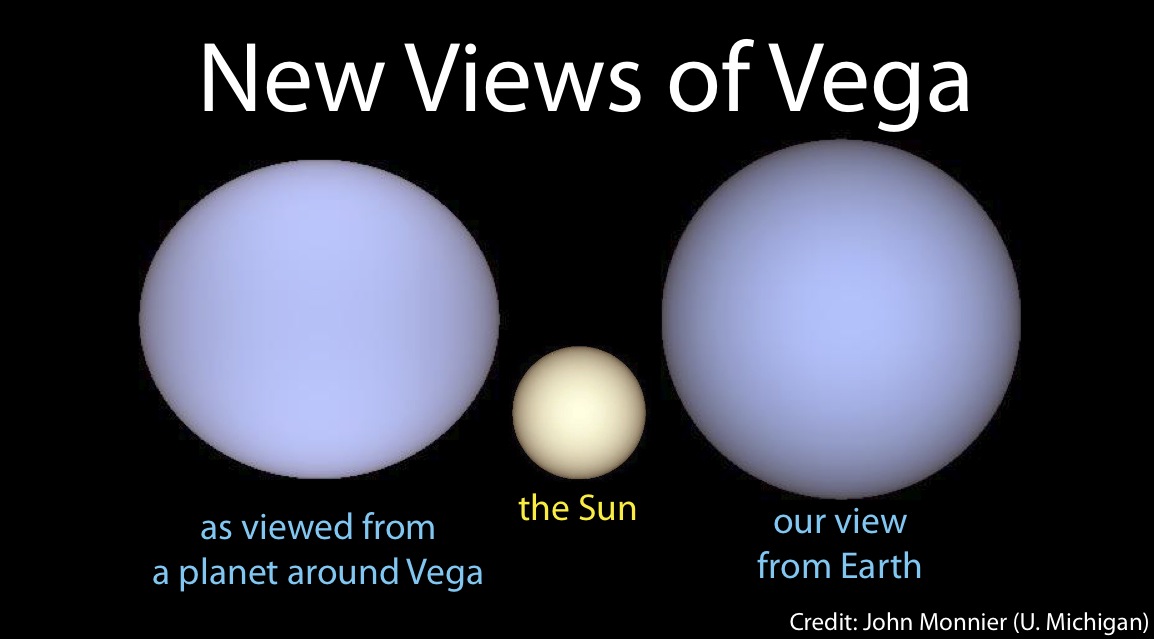 ANN ARBOR—Vega, a star astronomers have used as a touchstone to measure other stars’ brightness for thousands of years, may be more than 200 million years older than previously thought. That’s according to new findings from the University of Michigan.

The researchers estimated Vega’s age by precisely measuring its spin speed with a tool called the Michigan Infrared Combiner, developed by John Monnier, associate professor of astronomy in U-M’s College of Literature, Science, and the Arts.

MIRC collects the light gathered by six telescopes to make it appear to be coming through one that’s 100 times larger than the Hubble Space Telescope. It’s installed at the Georgia State Center for High Angular Resolution Astronomy Array located on Mt. Wilson, California.

The tool boosts resolution so astronomers can zoom in, relatively speaking, to observe the shape and surface characteristics of stars that would otherwise look like mere points even through the most powerful telescopes. By tracking stars’ surface characteristics, scientists can calculate how fast they rotate and deduce their inner workings.

Vega is a summer star in the Northern Hemisphere, just visible toward the west at sunset. It’s the brightest star in the constellation Lyra. At 25 light years away, Vega is close on cosmic scales. A light year is the distance light travels in one year.

About six years ago astronomers discovered that Vega is rotating so fast it’s nearly flinging itself apart. They haven’t been able to agree on many of the related details, however. One of the debates centers on Vega’s exact rotation rate, which is essential to gauge both its mass and age. Other controversies deal with Vega’s tilt as viewed from Earth and the amount of turbulence in the system from roiling gases at the star’s surface.

With MIRC’s unprecedented resolution, Monnier and his colleagues have taken steps to rectify competing estimates of Vega’s rotation rate and other properties The new findings indicate that the star rotates once every 17 hours, rather than once every 12. The sun’s equator, for comparison, rotates much slower—once every 27 days, or 648 hours. In addition to finding that Vega is older than previously thought, the Michigan group confirmed its mass to be just over two times the sun’s.

“Vega continues to challenge and surprise us,” Monnier said. “We found out not too long ago that it has a disk of dusty debris, or a leftover solar system, around it. Then we found out it was a rapid rotator. It’s a reference point for other stars, but it certainly isn’t boring or normal.”

The work will help astronomers build more accurate computer models of stars, so they can simulate those too far away to observe and gain a better understanding of their life cycles.

A paper on the findings is published in the current edition of Astrophysical Journal Letters. It’s titled “Resolving Vega and the inclination controversy with CHARA/MIRC.” The research is funded by the National Science Foundation and NASA.