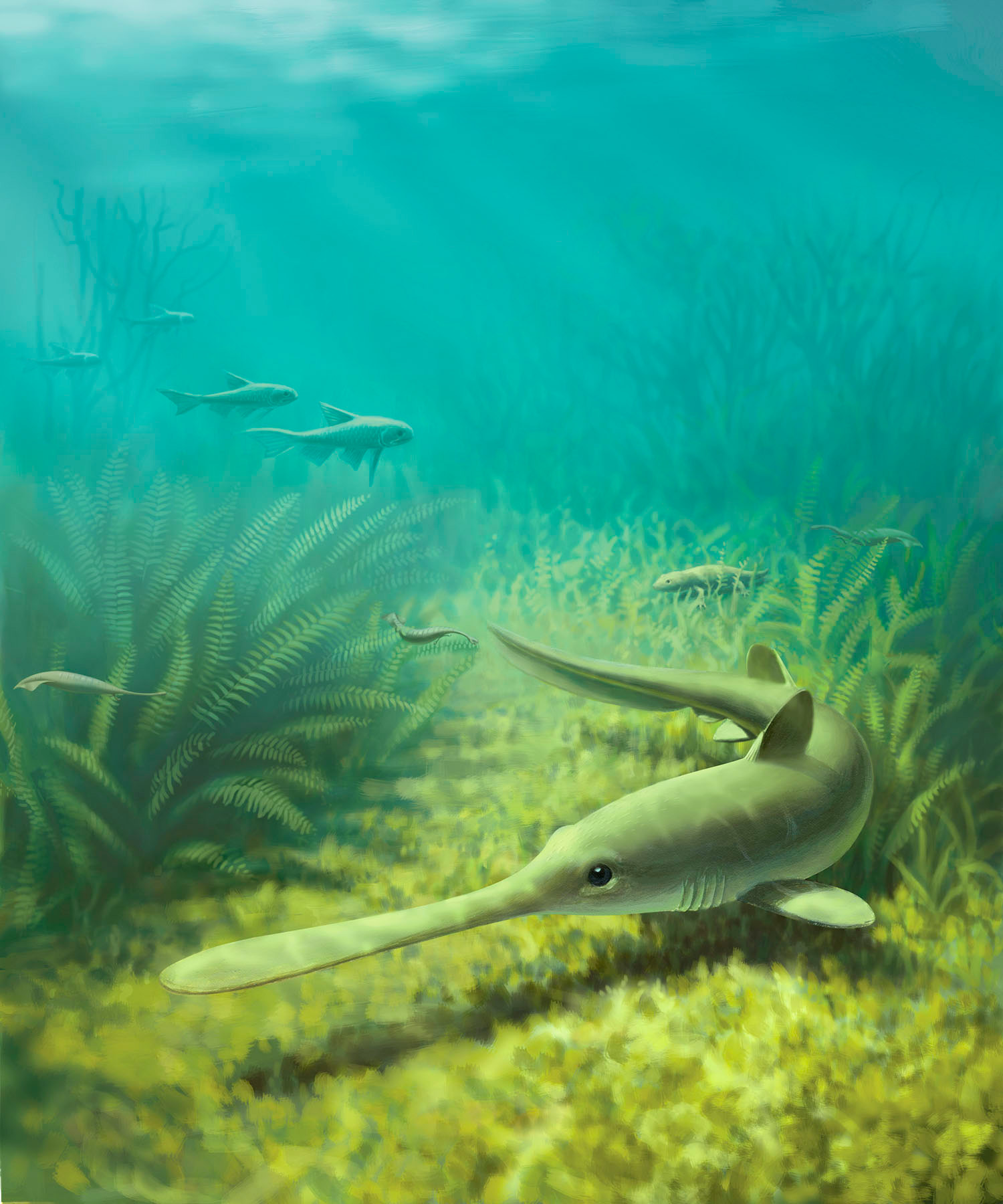 That’s the surprising conclusion of University of Michigan paleontologist Lauren Sallan and a University of Chicago colleague, who reanalyzed all known specimens of Bandringa, a bottom-feeding predator that lived in an ancient river delta system that spanned what is today the Upper Midwest.

The new findings, published online Jan. 7 in the Journal of Vertebrate Paleontology, mark the earliest known example of shark migration—a behavior that persists today among species such as tiger sharks in Hawaii.

The Bandringa fossils, as reinterpreted by Sallan and Michael Coates, also reveal the only known example of a freshwater to saltwater shark migration, as well as the earliest example of a shark nursery where fossilized egg cases and juvenile sharks were preserved in the same sediments.

“This pushes migratory behavior in sharks way back,” said Sallan, an assistant professor in the U-M Department of Ecology and Evolutionary Biology. “These sharks bred in the open ocean and spent the rest of their lives in fresh water. No shark alive today is known to do that.”

The long-extinct Bandringa is likely one of the earliest close relatives of modern sharks. It resembled present-day sawfish and paddlefish, with a spoon-billed snout up to half its body length. Juveniles were 4 to 6 inches long and grew into adults of up to 10 feet.

Bandringa was discovered in 1969 and soon became one of the most prized fossils from the well-known Mazon Creek deposits in northern Illinois. Until now, researchers believed that the genus Bandringa contained two species, one that lived in freshwater swamps and rivers and another that lived in the shallow ocean.

But after reevaluating fossils from 24 individuals, including latex “peels” of Bandringa’s scale-covered skin, Sallan and Coates concluded that Bandringa was a single species that lived, at various times during its life, in fresh, brackish and salt water.

The physical differences between the two purported species were due to different preservation processes at marine and freshwater locations, Sallan and Coates concluded. The freshwater sites tended to preserve bones and cartilage, while the marine sites preserved soft tissue.

Photo of a fossil impression left by a juvenile Bandringa shark. These long-extinct sharks are known for their extremely long spoonbill snouts, which resemble those of modern-day paddlefish. This individual measures about 4 inches from snout to tail and was found in marine sediments at the Mazon Creek deposit in Illinois. Photo courtesy of Lauren Sallan and Michael Coates.

By combining the complementary data sets from both types of fossil sites and reclassifying Bandringa as a single species, Sallan and Coates gained a far more complete picture of the extinct shark’s anatomy and discovered several previously unreported features. They include downward-directed jaws ideal for suction-feeding off the bottom, needle-like spines on the head and cheeks, and a complex array of sensory organs (electroreceptors and mechanoreceptors) on both the extended snout and body, suited for detecting prey in murky water.

It’s also the earliest evidence for segregation, meaning that juveniles and adults were living in different locations, which implies migration into and out of these nursery waters. Lauren Sallan

Adult Bandringa sharks lived exclusively in freshwater swamps and rivers, according to Sallan and Coates. Females apparently traveled downstream to a tropical coastline to lay their eggs in shallow marine waters, a reverse version of the modern-day salmon’s sea-to-stream migration. At the time, the coastline of the super-continent Pangaea ran diagonally between the Mazon Creek freshwater and marine sites.

All the Bandringa fossils from the Mazon Creek marine sites are juveniles, and they were found alongside egg cases—protective capsules that enclose eggs of the next generation—belonging to an early species of shark. Adult Bandringa fossils have been found only at freshwater locations, including several in Ohio and Pennsylvania.

Sallan and Coates said that the juvenile Bandringa sharks hatched from the Mazon Creek egg cases, and that the deposit’s marine sites represent a shark nursery where females spawned and then departed, returning upstream to freshwater rivers and swamps.

“This is the first fossil evidence for a shark nursery that’s based on both egg cases and the babies themselves,” Sallan said. “It’s also the earliest evidence for segregation, meaning that juveniles and adults were living in different locations, which implies migration into and out of these nursery waters.”

The Mazon Creek deposit is known for its extremely diverse, well-preserved fossils, with more than 320 animal species identified, according to the Illinois State Museum.