ANN ARBOR—Asian carp are capable of surviving and growing in much larger portions of Lake Michigan than scientists previously believed and present a high risk of becoming established, according to a new modeling study from University of Michigan researchers and their colleagues.

Some previous studies suggested that low food levels in Lake Michigan could be a barrier to the establishment of bighead and silver carp, which typically feed on algae and other types of plankton. Bighead and silver carp are the two Asian carp species of greatest concern for the Great Lakes.

But earlier studies did not consider the fact that bighead and silver carp are opportunistic feeders capable of surviving on a wide variety of diets, including dead organic matter called detritus. In Lake Michigan, detritus includes bits of resuspended fecal pellets from countless quagga and zebra mussels on the lake bottom.

In addition, previous studies did not evaluate potential carp habitat more than a meter below the lake’s surface.

When diet flexibility and subsurface habitat were factored in, the amount of suitable Asian carp habitat in Lake Michigan increased dramatically, according to study lead author Peter Alsip, who conducted the research for his master’s thesis at U-M’s School for Environment and Sustainability.

At certain times of year, the model showed that the entire extent of Lake Michigan, which has a surface area of more than 22,000 square miles and an average depth of 280 feet, contains suitable bighead carp habitat somewhere in the water column, according to Alsip, who now works at the U-M-based Cooperative Institute for Great Lakes Research. 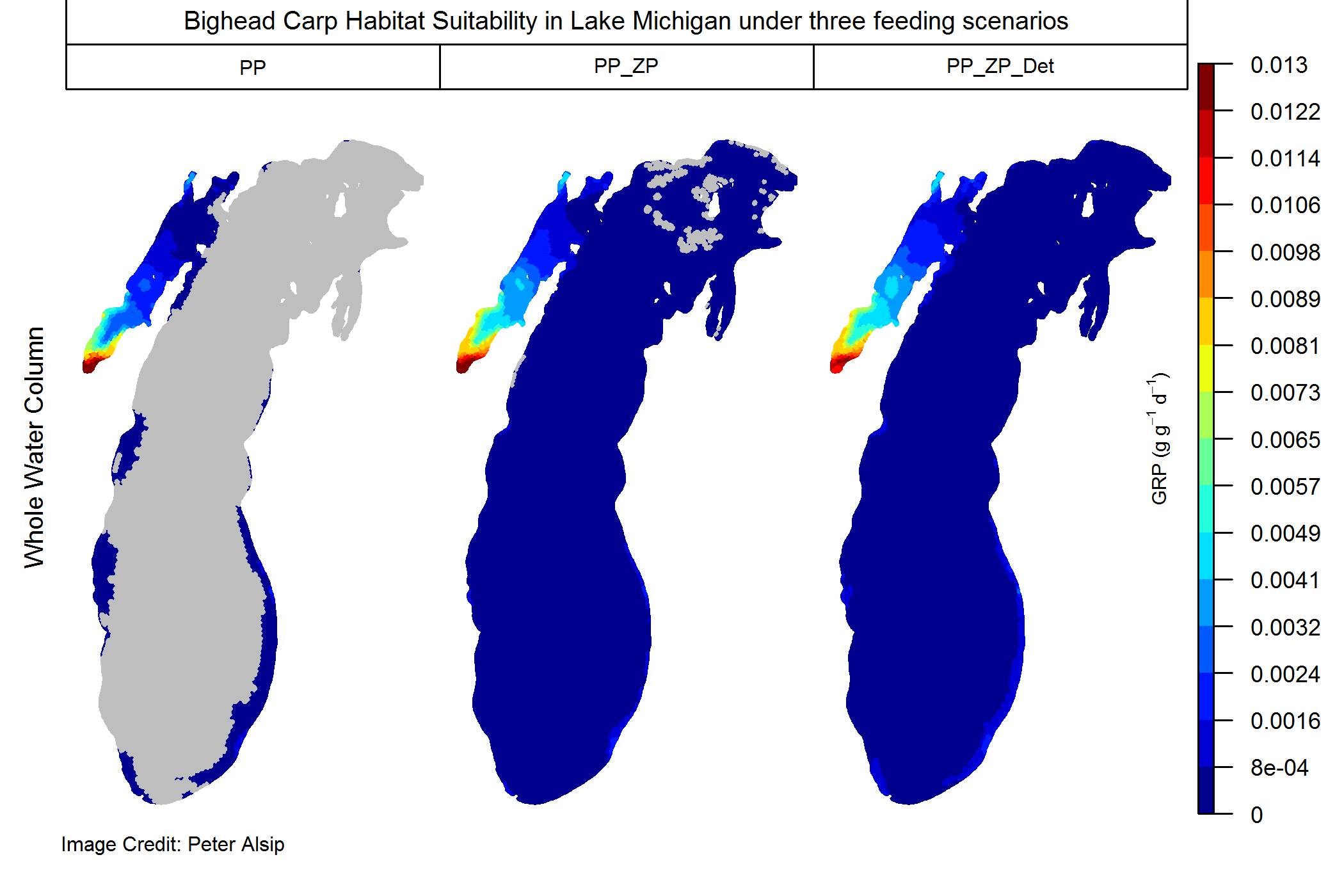 Silver carp habitat was confined to nearshore, nutrient-rich areas. The study was published online Aug. 12 in the journal Freshwater Biology.

“Subsurface habitat and the fishes’ diet flexibility were not evaluated in previous studies, and our findings indicate that these considerations had a noticeable effect on our suitability assessment,” Alsip said. “Lake Michigan’s low supply of plankton may not be as strong a barrier as previously thought.”

Levels of plankton-supporting nutrients in Lake Michigan have been declining for decades, largely due to reduced levels of phosphorus entering the lake and the spread of invasive quagga and zebra mussels, which now blanket the lake bottom, sucking up plankton and sequestering nutrients in fecal pellets called biodeposits.

The progressive loss of nutrients in Lakes Michigan’s water column, a process called oligotrophication, has generated skepticism among some scientists around the likelihood of Asian carp establishment there. But laboratory experiments have demonstrated that Asian carp are capable of surviving—and even gaining weight—while feeding only on quagga mussel biodeposits.

In their study, Alsip and his colleagues used simulated food abundance and water temperature values from a three-dimensional biophysical model of Lake Michigan to study the growth rate potential of bighead and silver carp.

They looked at how well individual adults of the two carp species could grow in Lake Michigan when feeding on various combinations of the three food types—phytoplankton, zooplankton and detritus—at various depths. Areas where bighead and silver carp could either maintain or increase their body weight were classified as suitable habitat. 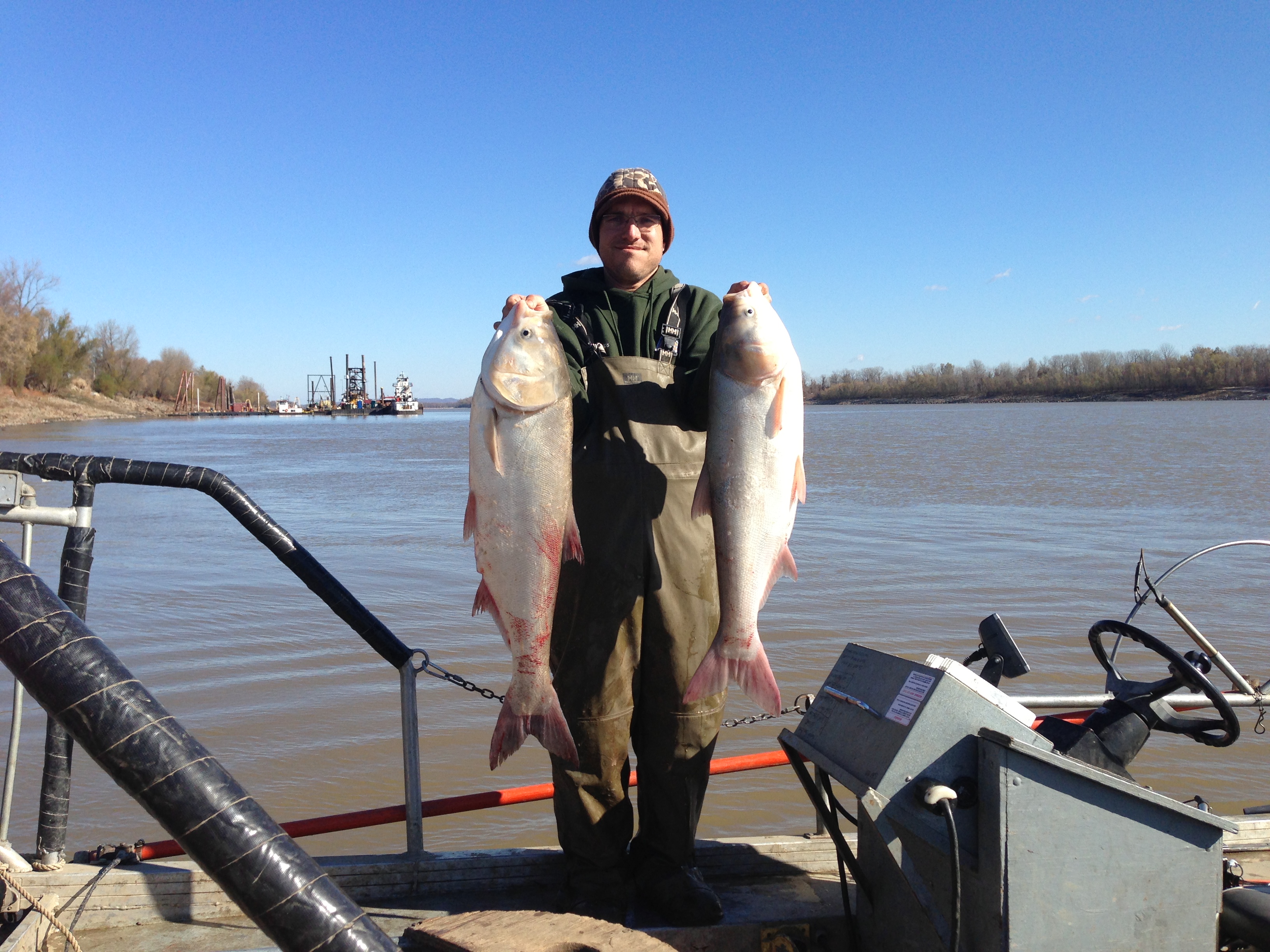 “We found that suitable habitat for bighead carp is widespread in Lake Michigan, and that’s a result of fundamental ecological importance for many reasons,” said study co-author Hongyan Zhang of Eureka Aquatic Research in Ann Arbor. Zhang, formerly of U-M’s School for Environment and Sustainability and the Cooperative Institute for Great Lakes Research, was Alsip’s thesis adviser.

Phytoplankton are single-celled, photosynthetic algae and cyanobacteria. Zooplankton are tiny animals at the base of the food chain that feed on phytoplankton. A big concern about Asian carp is that they might outcompete resident plankton-eating fish, including the larval stages of most fish species.

The new study showed that the widespread availability of quagga mussel fecal pellets in Lake Michigan would likely help keep Asian carp alive, enabling them to migrate through plankton-depleted open waters and eventually spreading throughout the lake. Bighead and silver carp are collectively known to scientists as bigheaded carp, or BHC.

“The ability of BHC to flexibly feed on phytoplankton, zooplankton and detritus mitigates their risk of starvation—even in offshore waters—and, therefore, increases their probability of establishment,” according to the authors. “Therefore, it seems likely that BHC could survive, establish, and spread to favorable habitat in Lake Michigan and its tributaries despite having to travel across expansive areas with minimal plankton biomass.”

Bighead and silver carp were imported to the Southern United States in the 1970s to control algae growth in reservoirs and sewage-treatment lagoons. They escaped and quickly spread throughout the Mississippi River Basin, establishing dense populations in places like the Illinois River, where they now comprise 63% of the total weight of all fish in the river.

Currently, bighead and silver carp are established in watersheds close to the Great Lakes but not in the lakes themselves.

The impact of Asian carp on already invaded ecosystems, as well as the proximity of the invasion front to Lake Michigan, have elevated concerns about the potential invasion of the Great Lakes via the Chicago Area Waterway System, the man-made connection between the Illinois River and Lake Michigan.

In May, the head of the U.S. Army Corps of Engineers sent Congress a $778 million plan to install carp defenses at the Brandon Road Lock and Dam near Joliet, Illinois, about 40 miles from Lake Michigan. In July, the region’s eight U.S. governors and two Canadian premiers endorsed the plan.

In addition to Alsip and Zhang, other authors are Mark Rowe, Doran Mason and Edward Rutherford of the National Oceanic and Atmospheric Administration’s Great Lakes Environmental Research Laboratory; Catherine Riseng of the U-M School for Environment and Sustainability and Michigan Sea Grant; and Zhenming Su of the Michigan Department of Natural Resources.

The project was funded by the Michigan Sea Grant Graduate Research Fellowship, with matching funds provided by the Institute for Fisheries Research at the Michigan Department of Natural Resources. Additional support was provided by Michigan Sea Grant, the Institute for Fisheries Research, CIGLR, GLERL and the Great Lakes Aquatic Non-indigenous Species Information System. CIGLR is a federally funded partnership between U-M and NOAA.

Using the same approach described above, Alsip and colleagues are currently studying how Asian carp habitat suitability is affected by meteorology, lakewide phosphorus loads, and quagga and zebra mussels. Their findings could provide a clearer picture of how a warming climate will affect Lake Michigan’s vulnerability to Asian carp and how habitat suitability has changed over time in response to nutrient-load reductions and the mussel invasion.