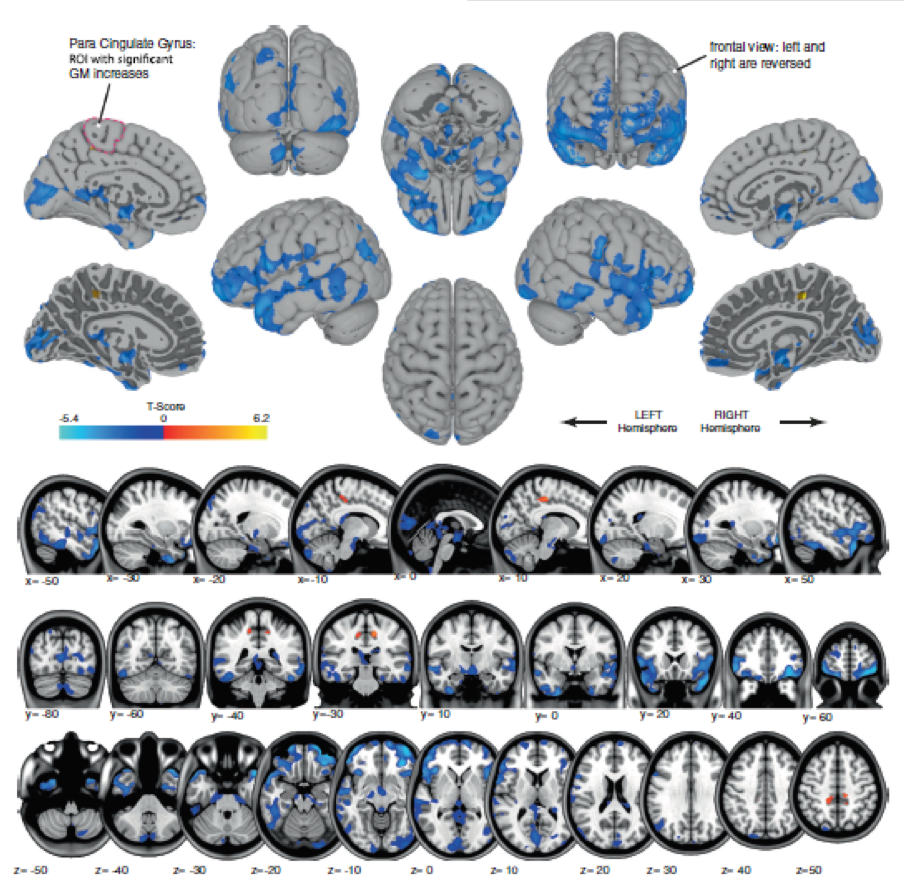 Blue shows areas of gray matter volume decrease, likely reflecting shifting of cerebrospinal fluid. Orange shows regions of gray matter volume increase, in the regions that control movement of the legs. This likely reflects brain plasticity associated with “learning how to move in microgravity”. This is the first image of how spaceflight changes brain structure in humans!

ANN ARBOR—MRIs before and after space missions reveal that astronauts’ brains compress and expand during spaceflight, according to a University of Michigan study.

The findings could have applications for treating other health conditions that affect brain function, says principal investigator Rachael Seidler, U-M professor of kinesiology and psychology.

The study, believed to be the first to examine structural changes that take place in astronauts’ brains during spaceflight, found that the volume of gray matter increased or decreased, and the extent of the alteration depended on the length of time spent in space.

Seidler and colleagues examined structural MRIs in 12 astronauts who spent two weeks as shuttle crew members, and 14 who spent six months on the International Space Station. All experienced increases and decreases in gray matter in different parts of the brain, with more pronounced changes the longer the astronauts spent in space.

“We found large regions of gray matter volume decreases, which could be related to redistribution of cerebrospinal fluid in space,” Seidler said. “Gravity is not available to pull fluids down in the body, resulting in so-called puffy face in space. This may result in a shift of brain position or compression.”

This figure shows dose response effects– blue areas are where there are more gray matter decreases in international space station astronauts than in those that just spent a few weeks on the space shuttle.

The researchers also found increases in gray matter volume in regions that control leg movement and process sensory information from legs, which may reflect changes related to the brain learning how to move in microgravity. These changes were greater in space station astronauts because their brains were learning and adapting 24/7.

“It’s interesting because even if you love something you won’t practice more than an hour a day,” Seidler said.

But the brain changes researchers observed were equivalent to someone practicing a new skill round-the-clock.

“In space, it’s an extreme example of neuroplasticity in the brain because you’re in a microgravity environment 24 hours a day,” Seidler said.

Though they haven’t pinpointed the exact nature of the changes yet, the findings may lead to new ways of thinking about certain health conditions—for example, people on long-duration bed rest or people who have normal pressure hydrocephalus, a condition in which cerebrospinal spinal fluid accumulates in ventricles in the brain and causes pressure.

Seidler said the brain changes could reflect new connections between neurons, and she’s leading another long-term study that will help determine the repercussions on cognition and physical performance, as well as how long the brain changes last. For example, even after balance returns, the brain might still recruit different pathways to compensate for the structural brain changes caused by spaceflight.

These results largely parallel findings from a long-term bed rest study that Seidler is leading, in which volunteers spent up to three months in downward tilted position, and brains shifted up.

The research is supported by a grant from NASA.

The study, “Brain structural plasticity with spaceflight,” appeared in the journal Nature Microgravity.