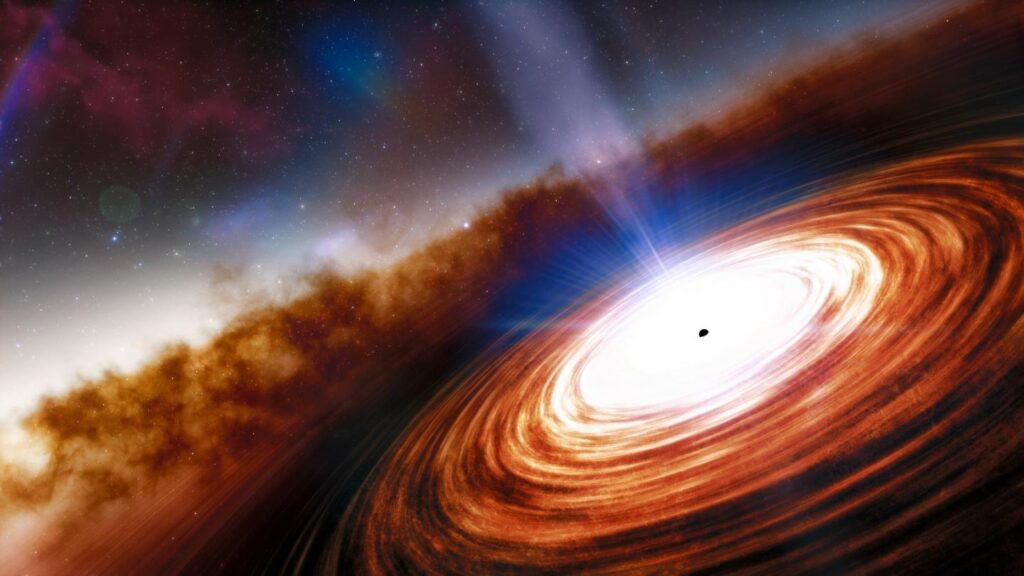 A team of astronomers including a University of Michigan researcher has observed a luminous quasar 13.03 billion light-years from Earth—the most distant quasar discovered to date.

In addition to being the most distant, and by extension, earliest, quasar known, the object is the first of its kind to show evidence of an outflowing wind of superheated gas escaping from the surroundings of the black hole at a fifth of the speed of light. In addition to revealing a strong quasar-driven wind, the new observations also show intense star formation activity in the host galaxy where the quasar, formally designated J0313-1806, is located.

Quasars are thought to result from supermassive black holes gobbling up surrounding matter, such as gas or even entire stars, resulting in a maelstrom of superheated matter known as an accretion disk that swirls around the black hole. Because of the enormous energies involved, quasars are among the brightest sources in the cosmos, often outshining their host galaxies.

Although J0313-1806 is only 20 million light-years farther away than the previous record holder, the new quasar contains a supermassive black hole twice as heavy. This marks a significant advancement for cosmology, as it provides the strongest constraint yet on the formation of black holes in the early universe.

“This is the earliest evidence of how a supermassive black hole is affecting its host galaxy around it,” said the paper’s lead author Feige Wang, a Hubble Fellow at the University of Arizona’s Steward Observatory. “From observations of less distant galaxies, we know that this has to happen, but we have never seen it happening so early in the universe.”

Quasars that already amassed millions, if not billions, of solar masses in their black holes at a time when the universe was very young pose a challenge to scientists trying to explain how they came into existence when they barely had the time to do so. A commonly accepted explanation of black hole formation involves a star exploding up as a supernova at the end of its life and collapsing into a black hole. When such black holes merge over time, they can – theoretically – grow into supermassive black holes.

However, much like it would require many lifetimes to build a retirement fund by chipping in a dollar each year, quasars in the early universe are a little bit like toddler millionaires; they must have acquired their mass by other means.

The newly discovered quasar provides a new benchmark by ruling out two current models of how supermassive black holes form in such short timescales. In the first model, massive stars that consist largely of hydrogen and lack most other elements that make up later stars, including metals, form the first generation of stars in a young galaxy and provide the food for the nascent black hole. The second model involves dense star clusters, which collapse into a massive black hole right from the outset.

Quasar J0313-1806, however, boasts a black hole too massive to be explained by the aforementioned scenarios, according to the team that discovered it. The team calculated that if the black hole at its center formed as early as 100 million years after the Big Bang and grew as fast as possible, it still would have had to have at least 10,000 solar masses to begin with.

“This tells you that no matter what you do, the seed of this black hole must have formed by a different mechanism,” said co-author Xiaohui Fan, Regents Professor and associate head of the UArizona Department of Astronomy. “In this case, one that involves vast quantities of primordial, cold hydrogen gas directly collapsing into a seed black hole.”

Because this mechanism doesn’t require full-fledged stars as raw material, it is the only one that would allow the supermassive black hole of quasar J0313-1806 to grow to 1.6 billion solar masses at such an early time in the universe. This is what makes the new record quasar so valuable, Fan explained.

“Once you go to lower redshifts, all the models could explain the existence of those less distant and less massive quasars,” he said. “In order for the black hole to have grown to the size we see with J0313-1806, it would have to have started out with a seed black hole of at least 10,000 solar masses, and that would only be possible in the direct collapse scenario.”

The newly discovered quasar appears to offer a rare glimpse into the life of a galaxy at the dawn of the universe when many of the galaxy-shaping processes that have since slowed or ceased in galaxies that have been around for much longer were still in full swing.

U-M astronomer Jiangtao Li has been contributing to this team on many related projects through X-ray observations of the most distant quasars, as well as optical spectroscopy observations of the redshifted ultraviolet absorption lines tracing the intervening gas between Earth and the quasars. The latter project is largely based at the 6.5-meter Magellan Baade telescope at the Las Campanas Observatory in Chile, to which U-M has privileged access.

“University of Michigan’s partnership in the world class ground optical/infrared telescopes, such as the twin 6.5m Magellan telescopes, and the future 39m Extremely Large Telescope, will provide its researchers and students a lot of unique opportunities to study various interesting objects in the early ages of the universe,” said Li. “These studies will play a critical role in our understanding of the formation and evolution of supermassive black holes, galaxies and larger scale structures over the cosmic time.”

The researchers presented their findings, which have been accepted for publication in the Astrophysical Journal Letters, during a press conference and a scientific talk at the 237th Meeting of the American Astronomical Society, which is being held Jan. 11-15.