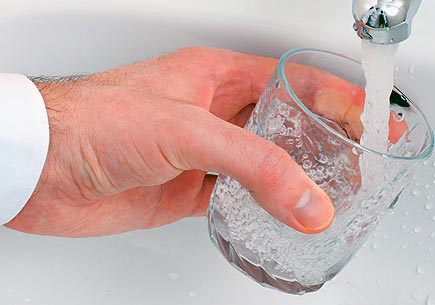 ANN ARBOR—Most of the bacteria that remain in drinking water when it gets to the tap can be traced to filters used in the water treatment process, rather than to the aquifers or rivers where it originated, University of Michigan researchers discovered.

Their study—a unique, broad-based look at Ann Arbor’s water supply from source to tap—could open the door to more sustainable water treatment processes that use fewer chemicals and, as a result, produce lower levels of byproducts that may pose health risks. Eventually, the work could enable engineers to control the types of microbes in drinking water to improve human health like “live and active cultures” in yogurt, the researchers say.

The research, led by Lutgarde Raskin, a professor of civil and environmental engineering, is published online in Environmental Science & Technology and will appear in a forthcoming print edition. Over six months, the researchers sampled water at 20 points along its path from groundwater and Barton Pond sources to residents’ faucets and several more places in the water treatment plant. They harvested bacteria from each sample and sequenced their DNA.

Tap water is teeming with bacteria despite the intensive filtering and disinfection that occur in most of the developed world. That’s not necessarily a problem, the U-M researchers say. It could be an opportunity.

“A major goal right now in drinking water treatment is to kill all bacteria because there’s the perception that all bacteria are bad. But there’s a good bit of scientific literature that says there are good bacteria, innocuous bacteria and bad bacteria. If we can better understand the types of bacteria in the microbial community from source to tap and what processes control it, perhaps we can be more effective at controlling which ones get through,” said Ameet Pinto, a lecturer at the University of Glasgow who worked on this project as a postdoctoral researcher in Raskin’s lab.

“In addition to the protection we have already, there is potential to add benefits to the water we consume everyday for improving our health…”

Most previous drinking water studies have focused more narrowly on disease-causing pathogens, Pinto said. But bacteria such as Legionella, Salmonella, and E. coli don’t exist in isolation. Their fate is influenced by the microbial community around them.

“The more critical questions are ‘Where do they come from?’ and ‘What determines which ones survive treatment and end up in our drinking water?’ These questions have not been systematically asked until now,” Pinto said.

The study found that the “activated carbon filters” commonly used to remove suspended particles play a significant role in determining which bacteria are most prevalent in treated drinking water.

The relative abundance of Alphaproteobacteria, for example, was found to be around 6 percent in source water, but 38 percent on the filters, and 23 percent of the bacterial community at the tap. This pattern occurred despite regular filter cleaning. These mostly harmless bacteria were able to form biofilms on the filters, slough off into the water and survive the disinfection process.

Water suppliers typically add chemicals such as chlorine to drinking water, but these disinfectants can react with naturally-occurring substances in the water to form potentially harmful byproducts, according to the EPA. Many of these byproducts themselves are regulated.

“Disinfection can form harmful chemicals in drinking water,” said Chuanwu Xi, associate professor of environmental health sciences in the School of Public Health, who participated in this study. “If we can get away with not using so many chemicals and prevent the formation of these byproducts, we should think about limiting their use.”

The researchers suggest that these filters could serve as early indicators of the presence of beneficial and disease-causing bacteria. They could be regularly tested, and pathogens might be contained there to prevent them from reaching the distribution system. The filters also could potentially be re-engineered to support the growth of beneficial or neutral bacteria.

“We hope to begin research to explore how to improve public health by engineering drinking water treatment plants to impact the drinking water microbiome, perhaps by promoting growth of beneficial microbes that outcompete pathogenic microbes,” Raskin said. “We think it is feasible to do this in the long run.”

“Current regulations and engineering practices focus on removing chemical and microbial contaminants from the source water to provide safe and clean water and protect the public from waterborne diseases,” Xi said. “In addition to the protection we have already, there is potential to add benefits to the water we consume everyday for improving our health, for example, by having a positive impact on the microbial community in the human gut. More research is needed to evaluate this potential beneficial impact when we move in that direction.”

The work was funded by the National Science Foundation. The paper is titled “Bacterial Community Structure in the Drinking Water Microbiome Is Governed by Filtration Processes.”