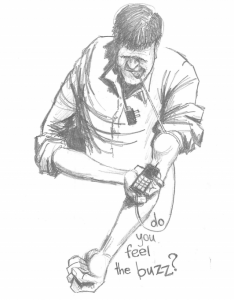 ANN ARBOR—You’ve probably felt or heard it before: a buzz in your pocket or a ding from your purse. You think a message has come to your phone, but when you look, the screen is blank.

Researchers call these “phantom communication experiences,” and University of Michigan Institute for Social Research scientist Daniel Kruger has linked the frequency of feeling these phantom vibrations to a person’s cell phone dependency.

Kruger says his findings, published in the journal Computers in Human Behavior, may add to the body of research used to support the inclusion of mobile phone or technology addiction in the Diagnostic and Statistical Manual of Mental Disorders. Researchers attempted to add this addiction to the manual in 2013, but failed.

“When people have addictions, there’s a phenomenon in which they are hypersensitive to stimuli associated with a rewarding stimulus,” Kruger said. “This study provides some real insight and maybe some evidence that people can have a real dependency on cell phone use.”

Kruger and student Jaikob Djerf, a participant in the Undergraduate Research Opportunities Program, recruited 766 undergraduates, 384 of which were women and 382 men. The study participants first completed the Ten Item Personality Inventory, which assesses personality characteristics—openness, conscientiousness, extraversion, agreeableness and emotional stability or neuroticism.

The participants also responded to statements from a survey called the Mobile Phone Problem Use Scale, including whether the students used their phones to make themselves feel better, to talk to others when feeling isolated, and if they felt anxious when forced to turn off their phones.

“I think these findings are something that can inform the discussion—and certainly, it pushes in the direction of saying, ‘Hey, whether you want to call it dependency or addiction, it’s real, it’s important, and we should be paying attention to this,” Kruger said.