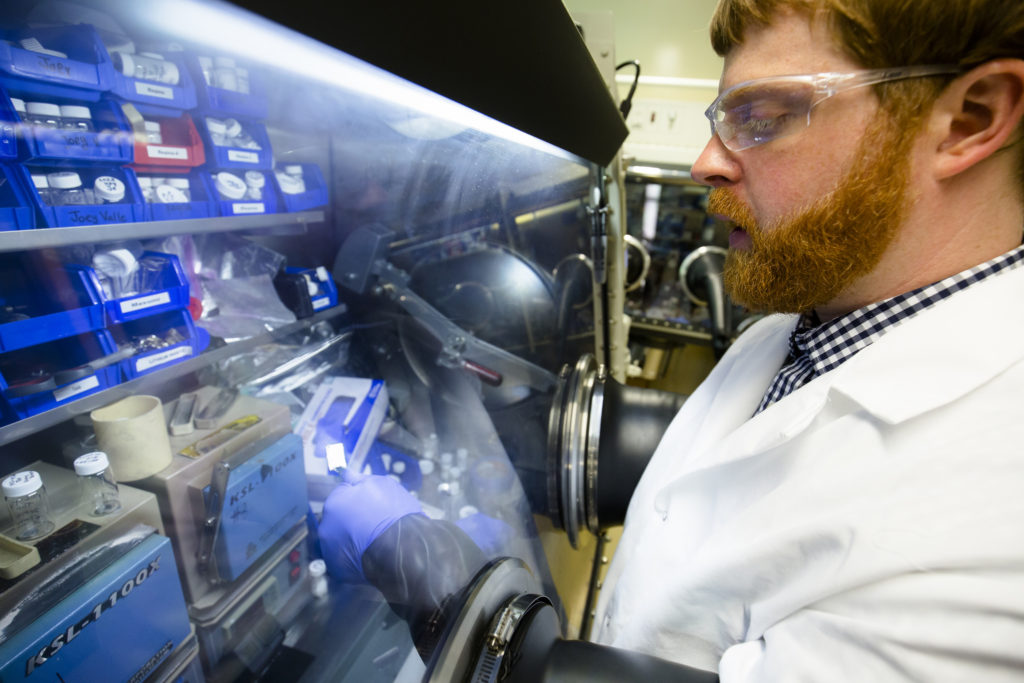 By using a ceramic, solid-state electrolyte, engineers can harness the power of lithium metal batteries without the historic issues of poor durability and short-circuiting. The result is a roadmap to what could be the next generation of rechargeable batteries.

“This could be a game-changer—a paradigm shift in how a battery operates,” said Jeff Sakamoto, a U-M associate professor of mechanical engineering who leads the work.

In the 1980s, rechargeable lithium metal batteries that used liquid electrolytes were considered the next big thing, penetrating the market in early portable phones. But their propensity to combust when charged led engineers in different directions. The lithium atoms that shuttle between the electrodes tended to build tree-like filaments called dendrites on the electrode surfaces, eventually shorting the battery and igniting the flammable electrolyte.

The lithium ion battery—a more stable, but less energy-dense technology—was introduced in 1991 and quickly became the new standard. These batteries replaced lithium metal with graphite anodes, which absorb the lithium and prevent dendrites from forming, but also come with performance costs:

“What we’ve come up with is a different approach—physically stabilizing the lithium metal surface with a ceramic,” Sakamoto said. “It’s not combustible. We make it at over 1,800 degrees Fahrenheit in air. And there’s no liquid, which is what typically fuels the battery fires you see.

A demonstration of a machine that uses heat to densify a ceramic known as LLZO at 1,225 degrees Celsius. Image credit: Evan Dougherty, Michigan Engineering

In earlier solid state electrolyte tests, lithium metal grew through the ceramic electrolyte at low charging rates, causing a short circuit, much like that in liquid cells. U-M researchers solved this problem with chemical and mechanical treatments that provide a pristine surface for lithium to plate evenly, effectively suppressing the formation of dendrites or filaments. Not only does this improve safety, it enables a dramatic improvement in charging rates, Sakamoto said.

“Up until now, the rates at which you could plate lithium would mean you’d have to charge a lithium metal car battery over 20 to 50 hours (for full power),” Sakamoto said. “With this breakthrough, we demonstrated we can charge the battery in 3 hours or less.

“We’re talking a factor of 10 increase in charging speed compared to previous reports for solid state lithium metal batteries. We’re now on par with lithium ion cells in terms of charging rates, but with additional benefits. ”

That charge/recharge process is what inevitably leads to the eventual death of a lithium ion battery. Repeatedly exchanging ions between the cathode and anode produces visible degradation right out of the box.

In testing the ceramic electrolyte, however, no visible degradation is observed after long term cycling, said Nathan Taylor, a U-M post-doctoral fellow in mechanical engineering.

“We did the same test for 22 days,” he said. “The battery was just the same at the start as it was at the end. We didn’t see any degradation. We aren’t aware of any other bulk solid state electrolyte performing this well for this long.”

The group’s findings are published in the Aug. 31 issue of the Journal of Power Sources.

The research is funded by the Advanced Research Project Agency-Energy and the Department of Energy.