Battling obesity in the classroom with exercise

ANN ARBOR—There’s another burst of seat-bouncing, giggling and shouting in researcher Rebecca Hasson’s simulated classroom at the University of Michigan as Hasson catches study participant Marcus Patton cheating at Sorry!

Marcus isn’t having it. “How do you call that cheating?” demands Patton, an 11-year-old cyclone of energy.

Patton admits it’s tough to sit still. Like millions of other U.S. middle and grade school kids he gets scant exercise during school because budget and time restraints have slashed recess and lunch periods.

Hasson, assistant professor at the U-M School of Kinesiology, seeks to remedy that problem by studying kids like Patton in a collaborative research project called Active Classroom. Partners include the School of Public Health Momentum Center, Taubman College of Architecture and Urban Planning, and School of Education. 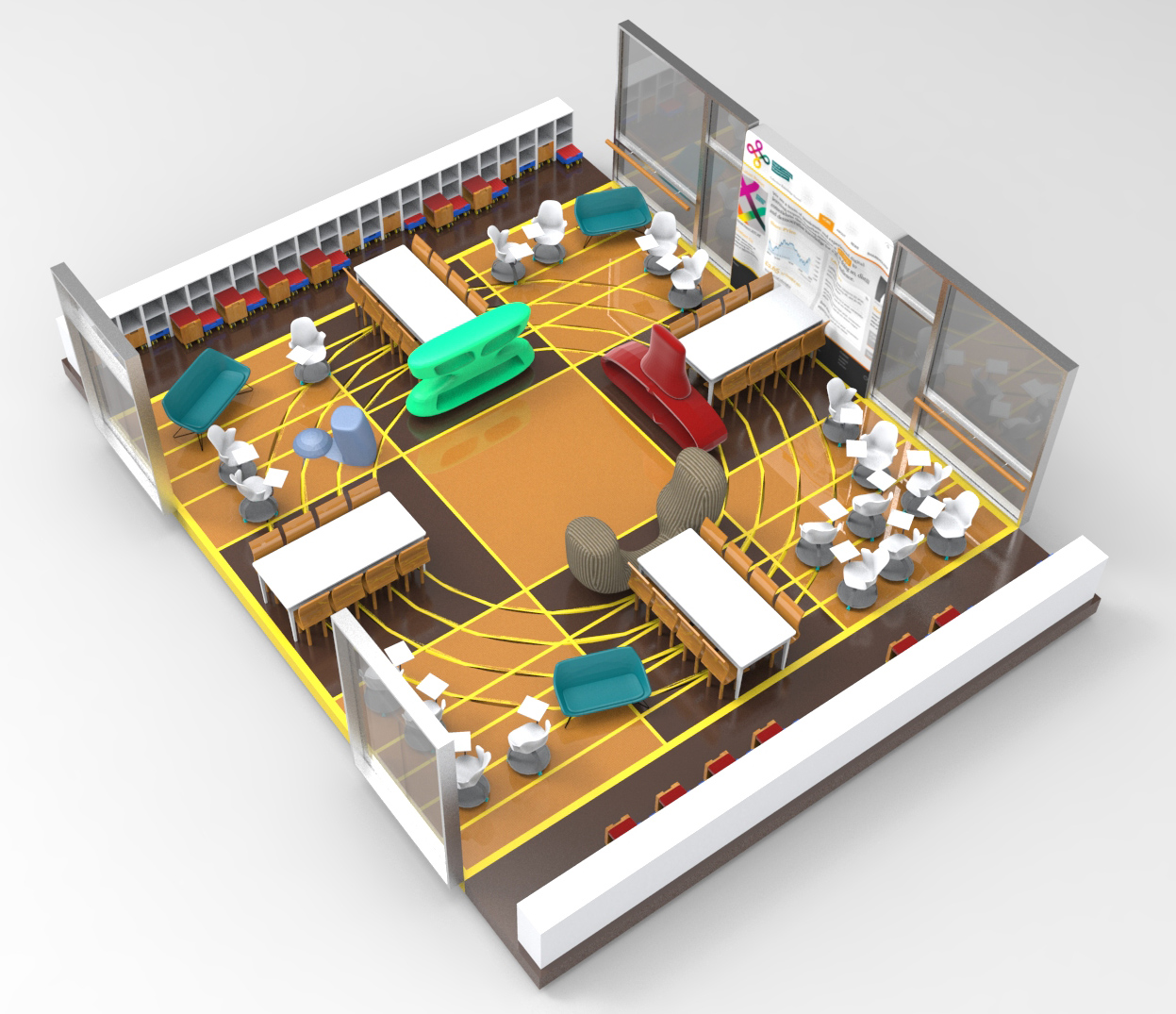 Active class learning zones, work zones and active walls. Image courtesy: U. Sean Vance, Taubman College of Architecture and Urban DesignResearchers hope to find ways to redesign classrooms and develop a curriculum to add in two-minute exercise breaks throughout the day—”a prescription for physical activity”—and incorporate the additional fitness as seamlessly as possible for teachers.

Clarke Fields, 9, and Patton, are between activity breaks now, meaning they’ll play games, watch television or do something else sedentary between one of the 20 activity breaks. That’s 40 minutes of exercise by the end of the school day—but still only two-thirds of the recommended 60 minutes for kids.

Hasson’s physical activity study differs from others in that it focuses on the built and curricular environments rather than solely focusing on behaviors, nutrition and exercise.

Her initial findings are promising: By incorporating low-, medium- or high-intensity activity, kids may burn 100-300 more calories a day. She found they quickly refocused on school work, and none reported disliking the exercise.

Their enthusiasm shows. Patton and Fields snap to attention when Hasson shouts: “Ready for an activity break?”

They jump up and record their resting heart rates. Nicki Minaj pumps out of the computer and they’re off: Two minutes of high-intensity jumping jacks, skiers, butt kicks and high-knees. Hasson, who’s also a former competitive volleyball player, jumps and kicks along with them, shouting encouragement.

“Time!” The students, breathless and smiling, shout out heart rates and perceived exertion scores and Hasson writes them on a whiteboard.

After the exercise, students take a quick math test to gauge how easily they reset back to learning mode. By the end of this first study phase, researchers will also know which intensities and exercises are best for weight management, fitness, cognition and other factors that impact a child’s well-being in and out of the classroom. 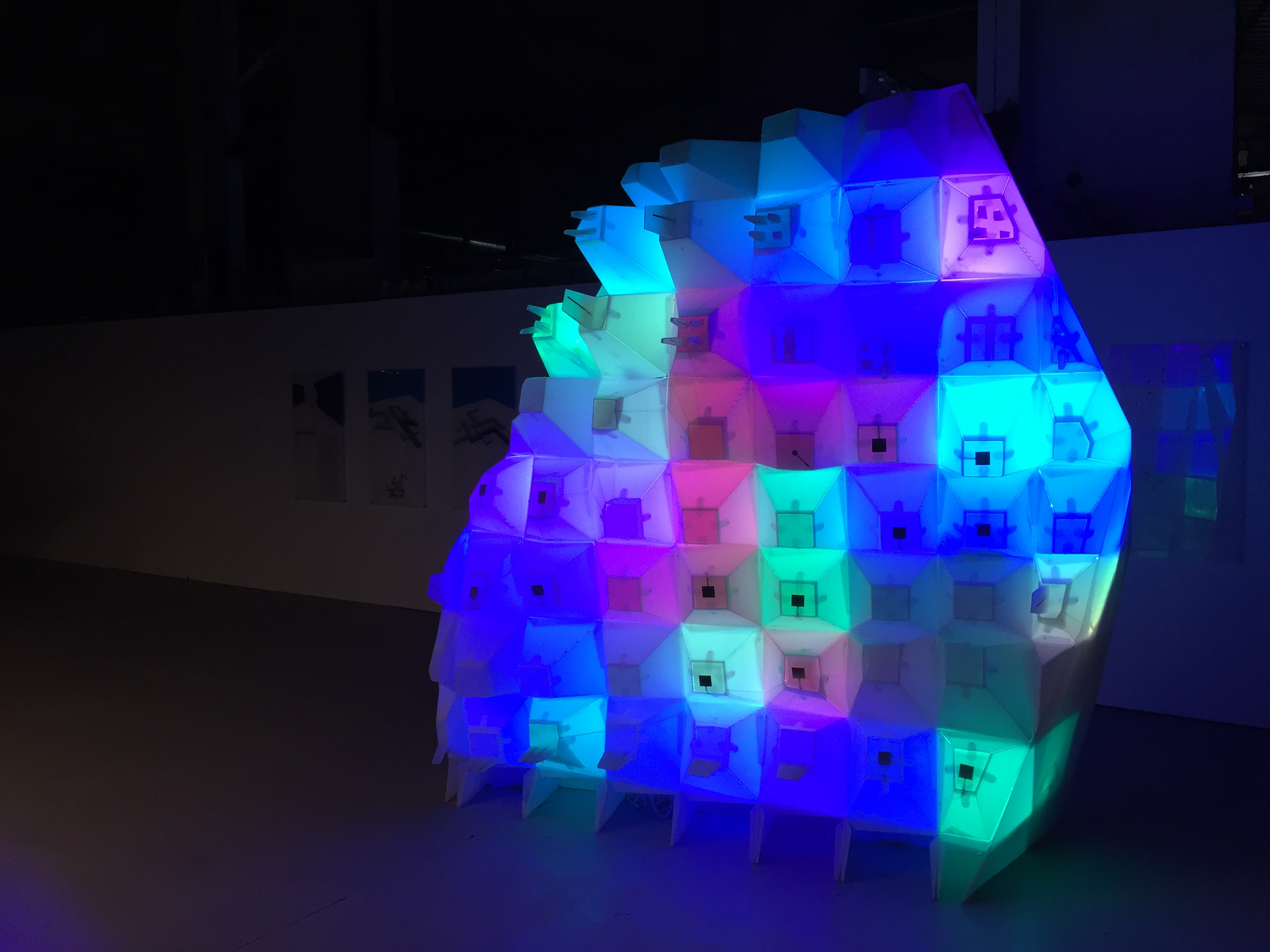 A young visitor investigates a mock-up of an active wall. Image courtesy: U. Sean Vance, Taubman College of Architecture and Urban DesignThe other essential parts of the research are “playable” hallways and classrooms. Hallways could be designed with pathways or longer routes and encourage room-to-room movement or activities like hopscotch. Classes might include furniture that teachers can store or rearrange and structures such as climbing walls.

Patton’s mother Tabia arrives during another activity break. She teaches elementary school and supports Hasson’s goal but remains guarded. Climbing walls in a classroom with 30 kids? That sounds hard to manage. Still, she says she’d love to be able to do this in her classroom.

“When (Marcus) has to sit for long periods of time, it’s hard for him to focus,” Tabia Patton said, and she knows this is true for many kids.

Hasson understands if teachers are concerned.

“The kids will be an easy sell,” she said.

Indeed, their self-reported perceived exertion is almost always much lower than their actual exertion, which means they’re working a lot harder than they feel like they are. They also report enjoying the exercise days more than the sedentary days when they’re instructed to use a tablet.

The biggest challenge will be convincing overworked teachers and pressured administrators that it’s doable, Hasson says.

Hasson’s next steps are to partner with teachers like Tabia Patton in the Ann Arbor and Ypsilanti elementary schools to pilot this project in an actual classroom with the long-term goal of implementing the project nationwide. With waistlines expanding and lifespans shortening, she says it’s a public health priority.

“This generation of kids is expected to live two to five years less than their parents, and this problem is directly related to diet and physical inactivity,” Hasson said.