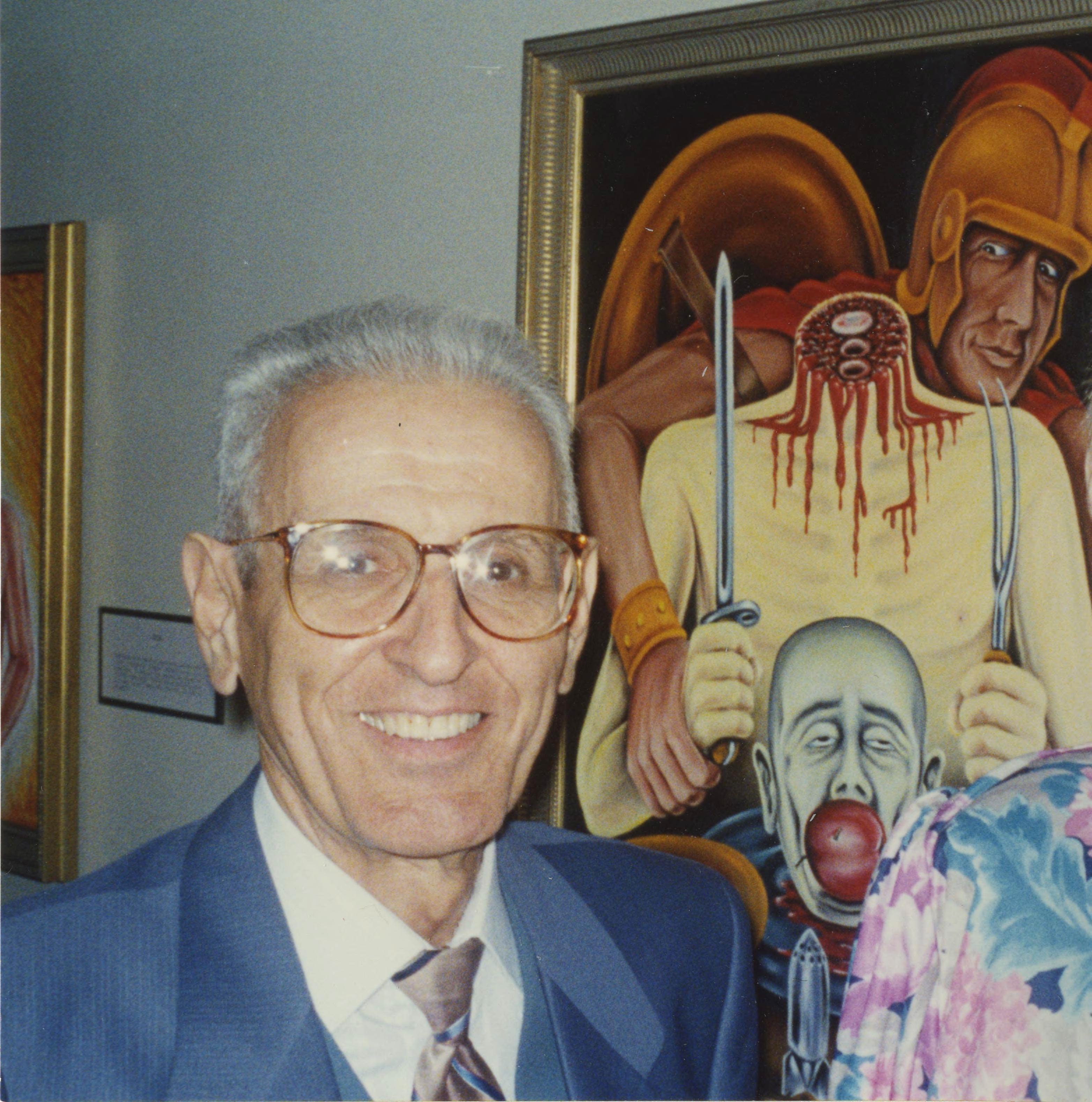 Photograph of Jack Kevorkian, taken in front of his painting “The Gourmet (War)” at Ariana Gallery in Royal Oak, Michigan. Courtesy the University of Michigan Bentley Historical LibraryANN ARBOR—The University of Michigan Bentley Historical Library has acquired the papers of Dr. Jack Kevorkian, a controversial Detroit-area native best known for his advocacy of physician-assisted suicide and terminal patients’ “right to die.”

“Long before Jack Kevorkian was known as ‘Dr. Death,’ he was a child of Armenian immigrants, a successful student, a graduate of the University of Michigan Medical School, a musician, composer and scientist,” said Terrence McDonald, director of the Bentley Historical Library. “The release of his papers will allow scholars and students to understand the context of and driving forces in an interesting and provocative life.”

In addition to correspondence, published works, manuscript drafts, photographs, court records, news coverage and interviews, the materials also contain files related to “medicide”—a term Kevorkian used to refer to the assisted suicides of more than 100 terminally ill people that he provided services to between 1990 and 1998.

The medicide files, which have been digitized and are now officially open to the public, consist of medical histories, photographs, and video and audio recordings of consultations with patients relating to many of the cases.

Olga Virakhovskaya, Bentley’s lead archivist who processed the materials, recently presented to the Society of American Archivists about the ethical considerations and decision-making relative to providing access to this specific collection.

“Many of the medicide patients and their families—who remain very close to this day— are still advocates of their family member’s choice to die, so anonymity was not an issue,” she said. “We felt very strongly that by not providing access to this collection and to the medicide files, we would be choosing to hide a very important story.”

The video consultations contain conversations between Kevorkian and his patients in their respective homes or in hotel rooms. In many cases family members are also present in the recordings, where they discuss the history of their illnesses, their current quality of life and the reasons why they decided to end their lives. Often these conversations transformed into discussions about the terminally ill patient’s right to have a choice in how they want to die, about religion, the existing legal system, politics, public discourse surrounding assisted suicide, and about Kevorkian’s own legal troubles. 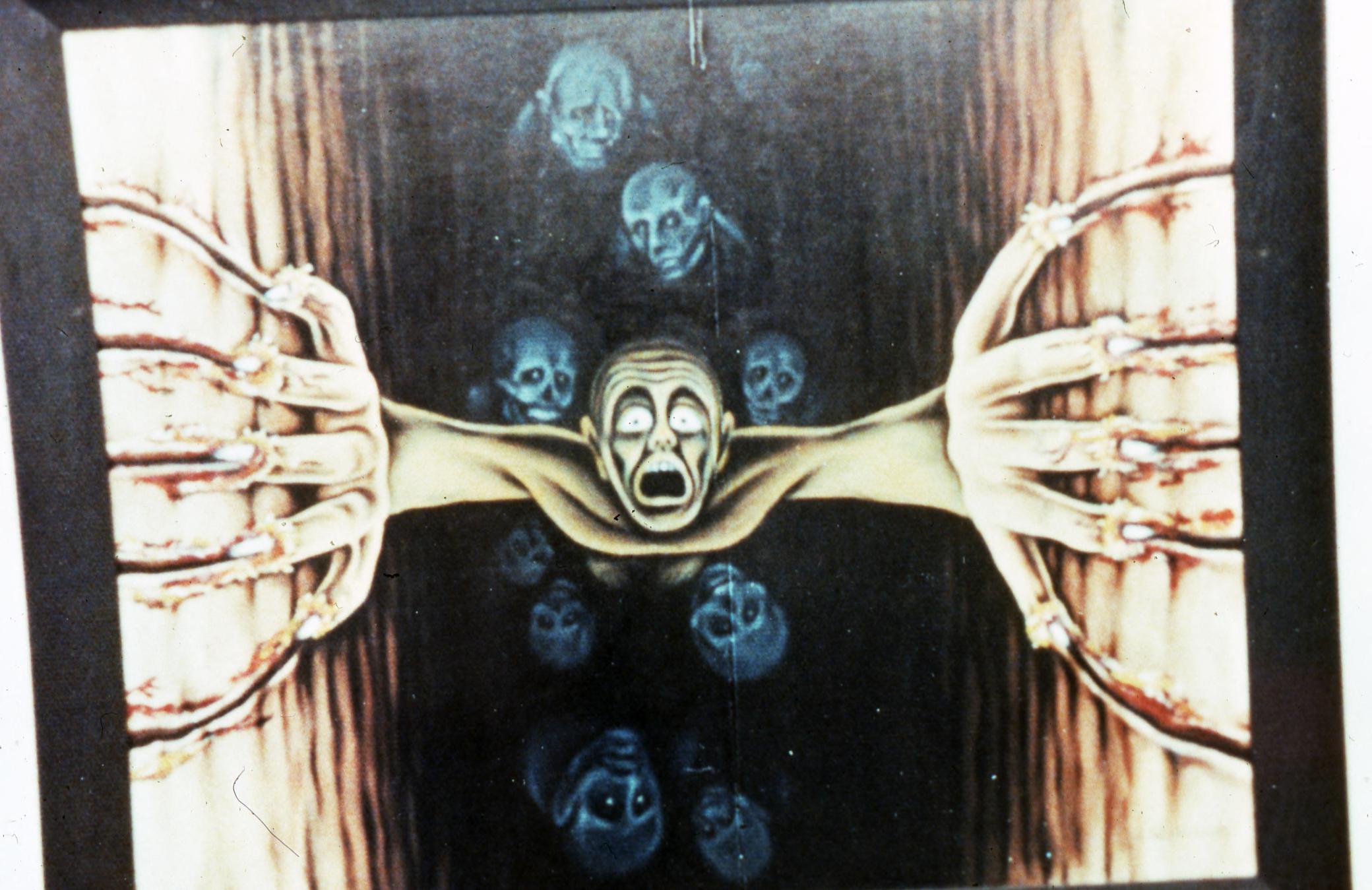 Color photograph of painting by Jack Kevorkian “Nearer My God to Thee” (oil, between 1963 and 1966) Painting was stolen from Kevorkian’s storage in Long Beach, CA in circa 1989. Image courtesy the University of Michigan Bentley Historical LibraryPerhaps the most intriguing part of the collection, according to Virakhovskya, are the lesser known materials relating to Kevorkian’s personal interests and pursuits, and historical documents and photographs from the Kevorkian family.

“He was a brilliant student who graduated high school early. He spoke several languages and he was very artistically gifted,” she said. “Much of his ‘dark’ artwork that focuses on the subject of death can be found in these archives, along with recordings of his musical compositions.”

Considered a radical even in his early days as a student at the U-M Medical School and later as a resident after he graduated in 1952, he proposed giving prisoners condemned to death the option to undergo euthanasia in order to subject their bodies to medical experimentation and allow harvesting of their healthy organs.

After leaving U-M, Kevorkian kept a low profile as an artist and pathologist until the mid 80s, when he re-emerged again in support of giving death row inmates a choice to donate their bodies to medicine.

“This way I won’t be dying in vain,” reads one 1984 interview transcript from a death row inmate, found within a portion of the collection that also contains signed petitions from other supportive inmates.

In 1988, he took interest in the “death with dignity” cause, advertising for “bioethics and obitiatry” services in Detroit-area newspapers, and in 1990, he facilitated his first medicide. In the years following, he was acquitted in three physician-assisted suicide trials, including a fourth that ended in a mistrial. He was eventually convicted of second-degree murder in a fifth trial after personally administering a lethal injection and served eight years in prison.

Kevorkian died in 2011 at the age of 83, four years after being released from prison in exchange for agreeing to end his medicide practice.

The release of the collection comes at a significant turning point in the “death with dignity” debate. Recently, California became the fifth state to allow terminally ill patients to legally end their lives using doctor-prescribed drugs.