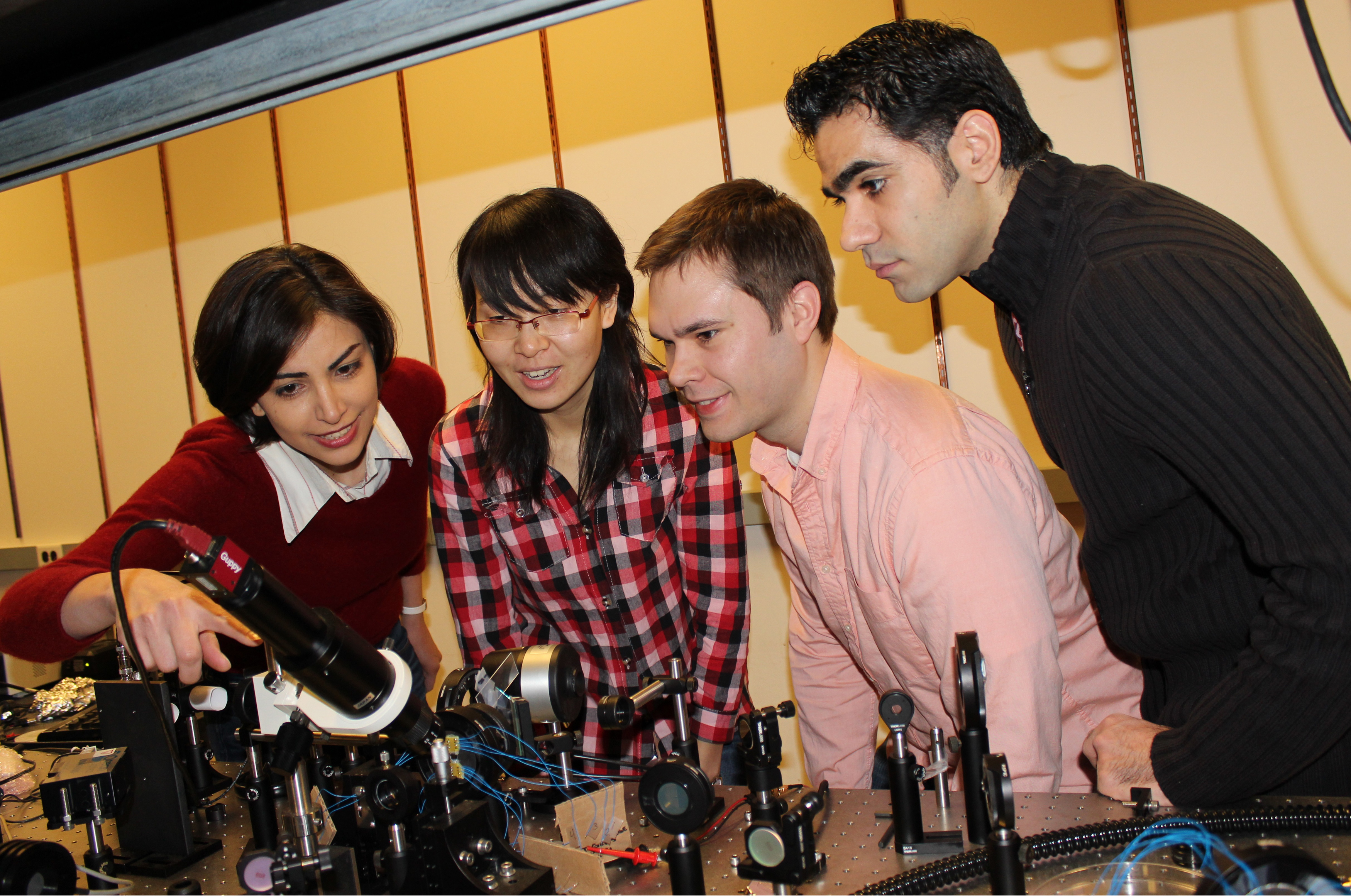 Mona Jarrahi, assistant professor of electrical engineering and computer science, and members of the research team that recently developed a super-sensitive terahertz source and detector system. Pictured are Ning Wang and Christopher Berry, doctoral students in electrical engineering and computer science, and Mohammad Reza Hashemi, a postdoctoral researcher in the same department. Photo courtesy of Mona JarrahiANN ARBOR—Low-energy terahertz radiation could potentially enable doctors to see deep into tissues without the damaging effects of X-rays, or allow security guards to identify chemicals in a package without opening it. But it’s been difficult for engineers to make powerful enough systems to accomplish these promising applications.

Now an electrical engineering research team at the University of Michigan has developed a laser-powered terahertz source and detector system that transmits with 50 times more power and receives with 30 times more sensitivity than existing technologies. This offers 1,500 times more powerful systems for imaging and sensing applications.

“With our higher-sensitivity terahertz system, you could see deeper into tissues or sense small quantities of illegal drugs and explosives from a farther distance. That’s why it’s important,” said Mona Jarrahi, U-M assistant professor of electrical engineering and computer science and leader of the project.

Jarrahi’s research team accomplished this by funneling the laser light to specifically selected locations near the device’s electrode that feeds the antenna that transmits and receives the terahertz signal.

Their approach enables light to hitch a ride with free electrons on the surface of the metallic electrodes to form a class of surface waves called surface plasmon waves. By coupling the beam of light with surface plasmon waves, the researchers created a funnel to carry light into nanoscale regions near device electrodes.

The excited surface plasmon waves carry optical photons where they need to be much faster and much more efficiently, Jarrahi said.

“When you want to generate or detect terahertz radiation, you have to convert photons to electron hole pairs and then quickly drift them to the contact electrodes of the device. Any delay in this process will reduce the device efficiency,” Jarrahi said. “We designed a structure so that when photons land, most of them appear to be right next to the contact electrodes.”

According to Jarrahi, the output power of the terahertz sources and the sensitivity of the terahertz detectors can be increased even further by designing optical funnels with tighter focusing capabilities.

“This is a fantastic piece of engineering,” said Ted Norris, U-M professor of electrical engineering and computer science. “It gets right to the central issue in photoconductive terahertz devices, which is collecting all the charge. Since every application benefits from increased sensitivity, for example, reduced data acquisition time or increased standoff distance, I expect this approach to be implemented widely.”

Norris, an expert on terahertz technology, is director of the U-M Center for Photonic and Multiscale Nanomaterials.

Terahertz systems that are powered by lasers have been the most successful in the marketplace so far, thanks to the cost-effective, compact and high-power lasers available today. Other researchers are using different approaches to powering terahertz systems, though.

The study, “Significant performance enhancement in photoconductive terahertz optoelectronics by incorporating plasmonic contact electrodes,” is published in the current edition of Nature Communications.