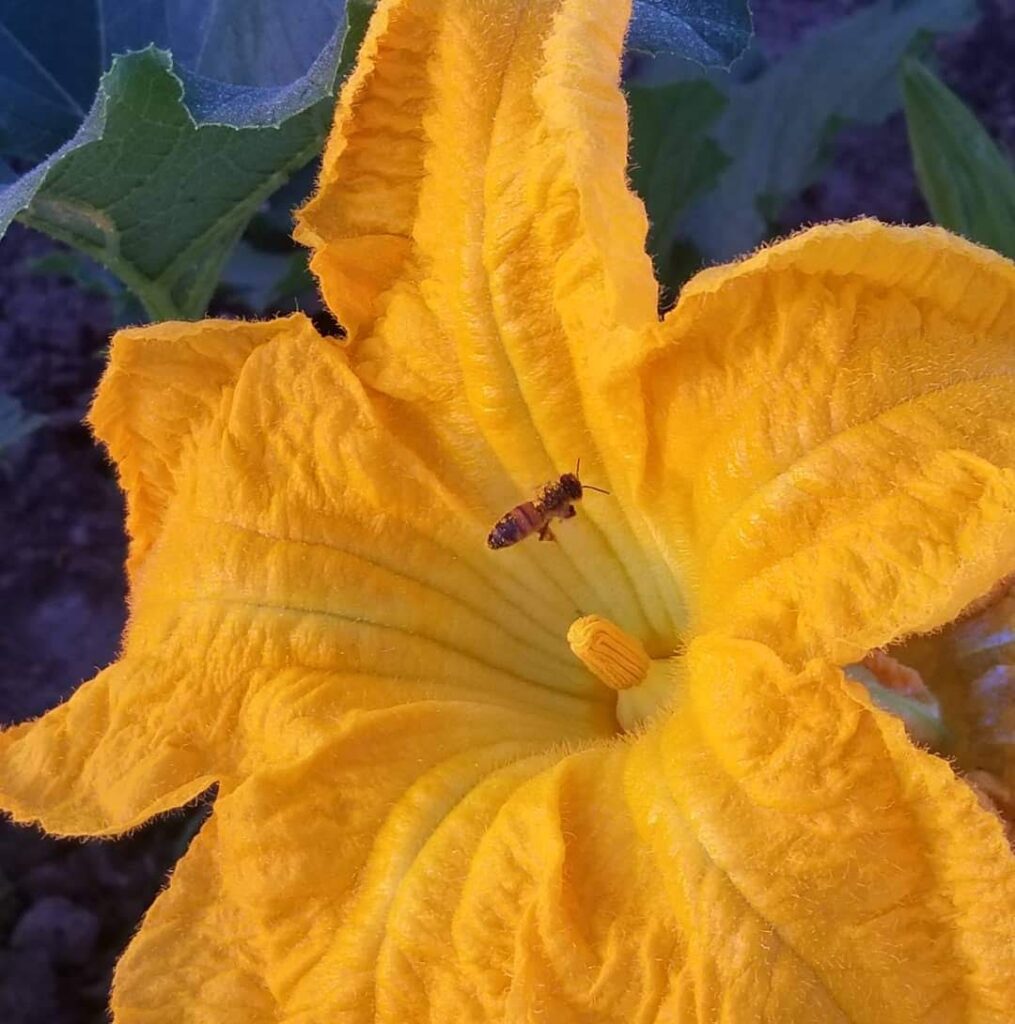 A European honeybee (Apis mellifera) flying to a squash flower. Both managed honeybee colonies and wild native bees pollinate Michigan winter squash flowers. Honeybees were found at all 14 farms included in the University of Michigan study, along with a diverse array of native bees. Image credit: Michelle Fearon

A new analysis of thousands of native and nonnative Michigan bees shows that the most diverse bee communities have the lowest levels of three common viral pathogens.

University of Michigan researchers netted and trapped more than 4,000 bees from 60 species. The bees were collected at winter squash farms across Michigan, where both managed honeybee colonies and wild native bees pollinate the squash flowers.

All but one species—Apis mellifera, the common European honeybee—are native bees. The number of bee species found at each farm ranged from seven to 49.

Consistently, lower virus levels were strongly linked to greater species richness among the local bee communities. The study was published online Feb. 11 in the journal Ecology. 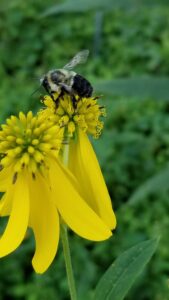 “This result is exciting because it suggests that promoting diverse bee communities may be a win-win strategy to simultaneously reduce viral infections in managed honeybee colonies while helping to maintain native bee biodiversity,” said study lead author Michelle Fearon, a postdoctoral researcher in the University of Michigan Department of Ecology and Evolutionary Biology.

“In light of recent global pollinator population declines that are due in part to the spread of pathogens, these results offer hope that conservation efforts could also broadly benefit pollinator health,” said Fearon, who conducted the study for her doctoral dissertation. She is now pursuing a follow-up study that explores how natural areas keep pollinator communities healthy.

The Ecology study is the first to show that high levels of biodiversity within bee communities can help dilute the harmful effects of viral pathogens. Support for this “dilution effect” has been reported in other host­—pathogen systems—such as tick-borne Lyme disease—but this is the first time it’s been seen with pollinator viruses. The idea of a dilution effect remains controversial among ecologists, however.

Honeybees were found at all of the sites, and a diverse array of native bees were also present in the squash fields and along field edges. In fact, native pollinators were much more common visitors to the squash flowers than honeybees at most locations. 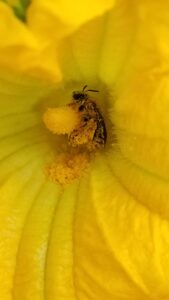 A female squash bee (Eucera pruinosa) covered in squash pollen. University of Michigan researchers collected more than 4,000 bees from 60 species at winter squash farms across the state, where both managed honeybee colonies and wild native bees pollinate the squash flowers. The number of bee species found at each farm ranged from seven to 49. Image credit: Michelle Fearon, University of Michigan.

Four types of bees—the European honeybee, the eastern bumblebee (Bombus impatiens), the squash bee (Eucera pruinosa) and several species of sweat bee (genus Lasioglossum)—were the most consistently abundant species among the bee communities that were sampled.

These pathogens contribute to high rates of colony loss among honeybees, and there are no widely available treatments that beekeepers can use to control them. Previous studies suggested that native bees are less commonly infected and may be less likely to transmit the pathogens to other bees.

The viruses spread as bees move from flower to flower, gathering pollen and nectar and pollinating the plants in the process. Consumption of virus-contaminated pollen is believed to be a primary mode of transmission.

For each of the four target bee groups in the U-M study, researchers found that lower viral prevalence was strongly linked to greater biodiversity of the local bee community: the more bee species present, the lower the percentage of bees infected.

Species-rich communities included many native bee species, which apparently helped to dilute the impact of the pathogens.

“Native bees likely reduce the viral prevalence in pollinator communities because they are poorer viral hosts than honeybees. This means that some native bees don’t get as sick as honeybees and are less likely to spread the virus to other bees,” said study co-author Elizabeth Tibbetts, a professor in the U-M Department of Ecology and Evolutionary Biology who was Fearon’s dissertation adviser. 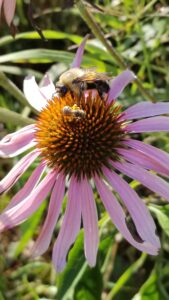 Bees are indispensable pollinators, supporting both agricultural productivity and the diversity of flowering plants worldwide. In recent decades, both native bees and managed honeybee colonies have seen population declines blamed on multiple interacting factors including habitat loss, parasites and disease, and pesticide use.

“We found encouraging evidence that pollinator conservation efforts can broadly benefit the health of both managed honeybee colonies and native bees,” Fearon said. “This management strategy could be especially crucial in agricultural areas where crop flowers are visited by both honeybees and native bees—places that may be hot spots for viral transmission among bee species.”

Funding for the work was provided by the National Science Foundation, the North American Pollinator Protection Campaign, the Pollinator Partnership, The Garden Club of America, U-M’s Rackham Graduate School, and the U-M Department of Ecology and Evolutionary Biology.