ANN ARBOR—Using PET scans of the brain, University of Michigan researchers showed that dopamine falls and fluctuates at different times during a migraine headache.

This could help scientists better understand dopamine-based therapies for migraines as well as a patient’s behavior during an attack.

The connection between dopamine and migraines has long been a poorly understood therapeutic and research area, says Alex DaSilva, assistant professor at the U-M School of Dentistry and Center for Human Growth and Development at the University of Michigan. 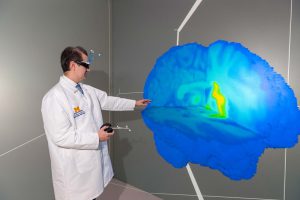 DaSilva and colleagues took various measurements of brain activity and dopamine levels of eight migraine sufferers and eight healthy patients during migraine attacks and between headaches. They compared study participants to each other with and without headaches, and also migraineurs to healthy patients. 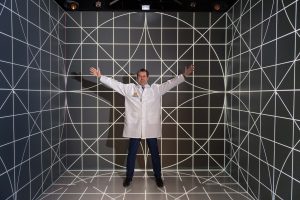 Alex DaSilva, assistant professor in the University of Michigan School of Dentistry, standing in the 3D lab on North Campus. DaSilva uses 3D imaging of the brain to better understand what happens to brain chemicals during a migraine headache. The formal name for the 3D lab is the Michigan Immersive Digital Experience Nexus, or MIDEN. Image credit: Scott Soderberg, Michigan Photography

This supports the hypothesis held by some researchers that migraines are a periodic disorder characterized by sensory hypersensitivity during which light, sound and odors may become abnormally intense, Casey says.

DaSilva says he was surprised when patients who were resting during their migraine attacks experienced a small dopamine spike and worsening symptoms when researchers applied warmth to their foreheads.

This condition in chronic pain patients is called allodynia—when a stimulus that normally wouldn’t cause pain does. DaSilva says the sudden small spike in dopamine was probably an aversive reaction to environmental stimulation.

This small fluctuation was only a partial recovery of dopamine, but it made the suffering worse because the dopamine receptors were highly sensitive by then, and even a small recovery would induce more nausea, vomiting and other symptoms related to migraine, he says.

In addition to the pain of migraines, DaSilva says the fall in dopamine in general could also explain some of the isolation and withdrawal that migraineurs exhibit during an attack.

“This dopamine reduction and fluctuation during the migraine attack is your brain telling you that something is not going well internally, and that you need time to heal by forcing you to slow down, go to a dark room and avoid any kind of stimulation,” he said.

The study, “Dopamine D2/D3 Imbalance During Migraine Attack and Allodynia In Vivo,” appears online ahead of print March 29 in Neurology, the medical journal of the American Academy of Neurology.